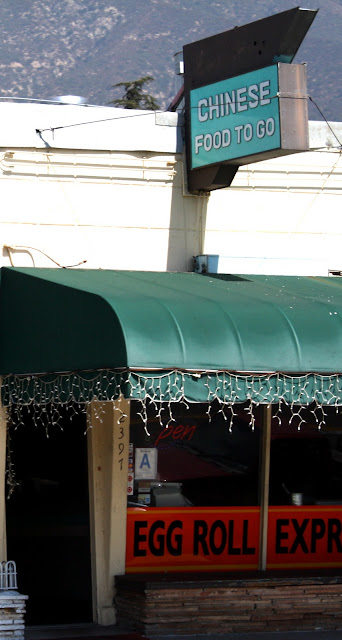 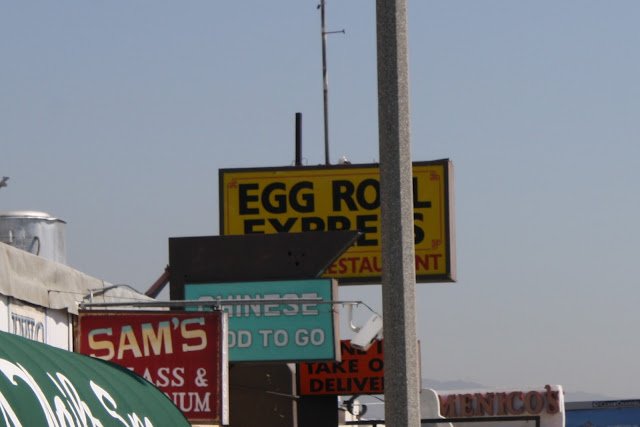 We are spoiled for choice when it comes to Chinese food in these parts. It's pretty hard to argue with that, though, as that's a matter of opinion, I suppose it's possible. Elizabeth and I once took her car to the dealer for it's routine maintenance; upon realizing the first three digits of her phone number are an Upstate New York area code, he announced that is where he was from, and they started talking about the differences.
"The thing that drives me crazy," he announced, "is that you can't get good pizza or Chinese food here." He noticed the puzzled look on my face and quickly blurted out "Sorry, are you from here?"
"Yes," I said, "and I agree with you about the pizza... but Chinese food?"
"Well," he said, "it's all about what you grew up with."
I considered pointing out that I grew up eating Domino's pizza and asking if, with that rationale, I could reasonably claim that you cant get good pizza in New York. But I didn't. Partly because we were just handing over the car keys to the guy and I didn't feel like arguing with him, but mostly because there was no point. I got the feeling the sum total of this guy's experience with Chinese food in the San Gabriel Valley was trying the Panda Express at the Arcadia mall.
Or maybe he'd just had a bad experience at one of the many hole-in-the-wall Chinese takeout spots we have scattered all over the place. And there are a lot of them. For every three-hour Chinese New Year dinner I've had at Empress Harbor, for every dim sum excursion to 888 Seafood or family dinner at Yang Chow, there has been a quick lunch at a Chinese takeout joint. I've been to most of them in Pasadena, but there was one I had yet to try: Egg Roll Express. Up on Washington Blvd in the northeast part of town, it's rare that I even drive by it. But the other day I was traveling in that direction, thinking about what to do for lunch, and decided to finally give it a try. 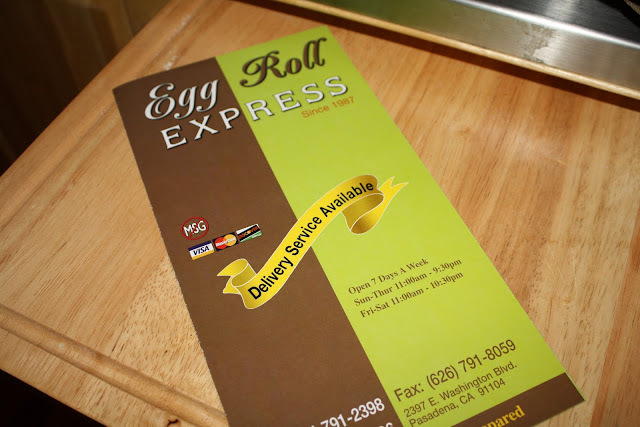 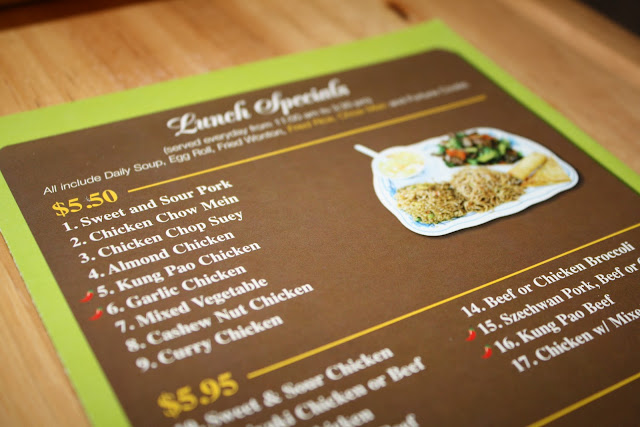 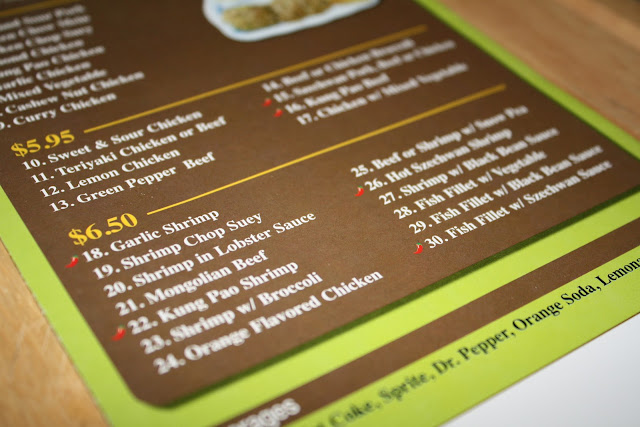 There were no other customers there. Strange for noon on a weekday. But there were five cooks in the kitchen, all furiously doing things. (I'm guessing they do a fair amount of delivery.) I looked over the "Lunch Specials" portion of the menu. If you've been in a place like this before, nothing on this menu will surprise you. A man stepped up and asked what I would like. "This is my first time here," I said. "What is your most popular item?"
"Do you like spicy or not spicy?" he asked. I answered spicy.
"Kung pao chicken!" he said.
"No thanks, I don't like peanuts." Then I noticed the "orange flavored chicken" was in the highest-priced section the lunch specials. That surprised me; I'm used to seeing it be one of the lower-priced items. I don't usually order orange chicken - I prefer garlic chicken or spicy shrimp at places like this - but the higher price point intrigued me. Maybe this place's specialty is orange chicken. So I ordered it. At $6.50 I figured I could afford to make a mistake; even if it was terrible there would still be soup, egg roll, wonton, fried rice and chow mein to eat. 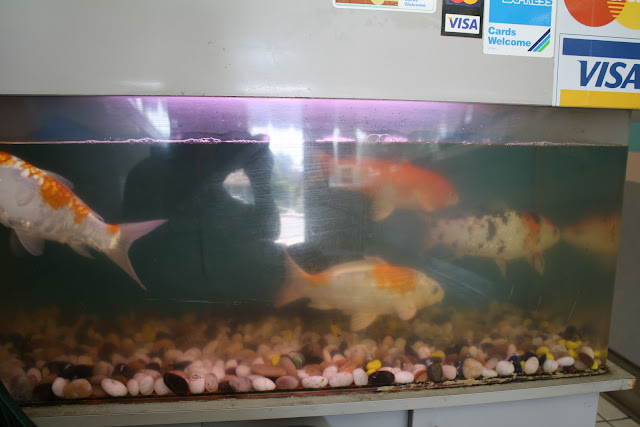 I took a seat next to the fish and waited for my food - which took less than five minutes. 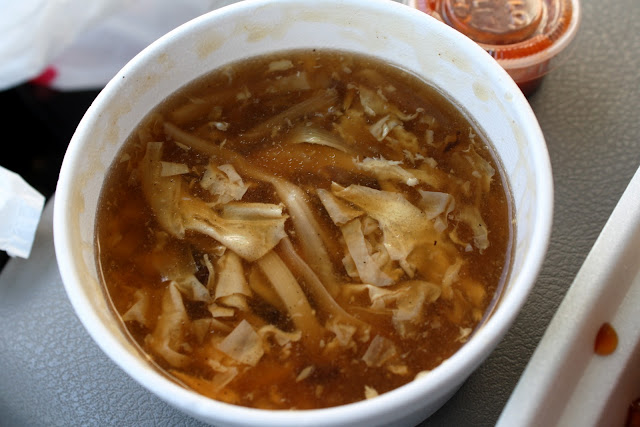 I was asked if I would like my soup "spicy or not spicy" - an interesting question since I had just told him 15 seconds earlier that I like my food spicy. But then again, I'm always repeating my dad's maxim never to make assumptions. I guess simply because I said I like my food spicy doesn't necessarily mean I wanted my soup spicy.
So of course I ordered it spicy. And it was not one bit spicy. Let's just move on. 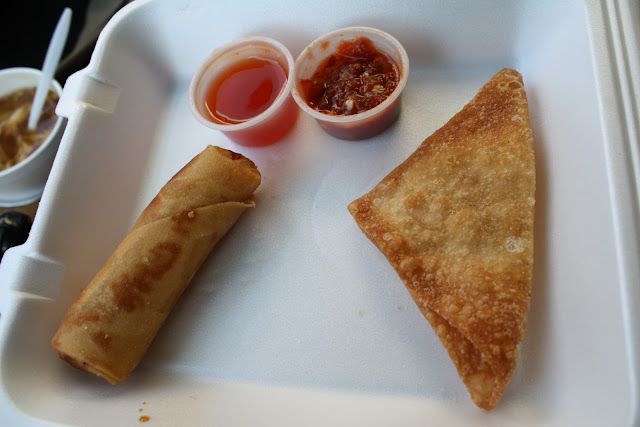 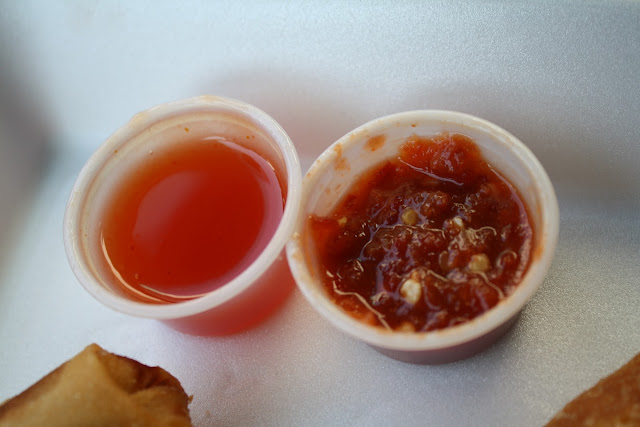 A little wax-paper bag held a spring roll and a fried wonton. And two thimble-sized containers of a sweet & sour sauce and chili paste. The former tasted like syrup but the latter was great and very spicy. 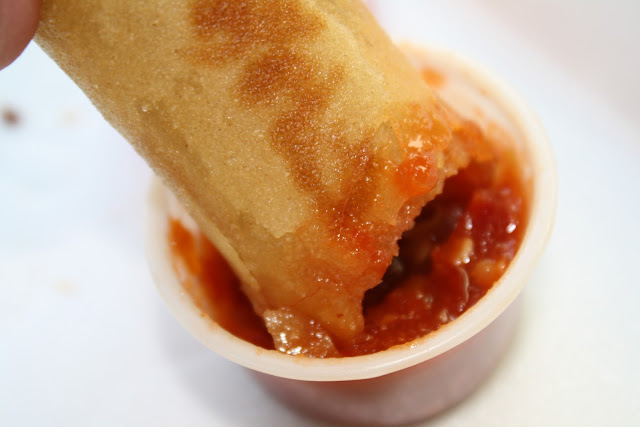 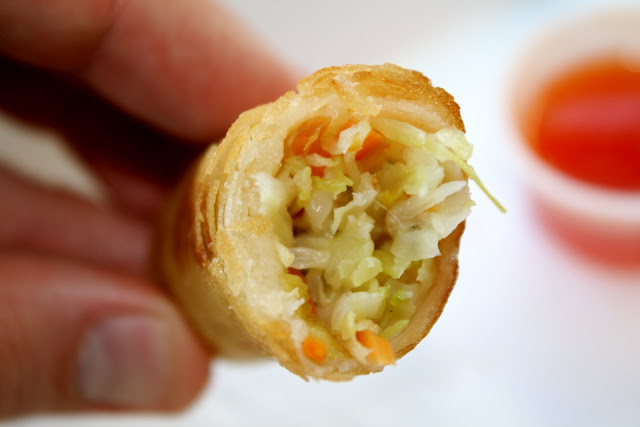 But even with the nice flavor of the chili sauce it couldn't save the egg roll. The veggies were stringy, chewy and flavorless. 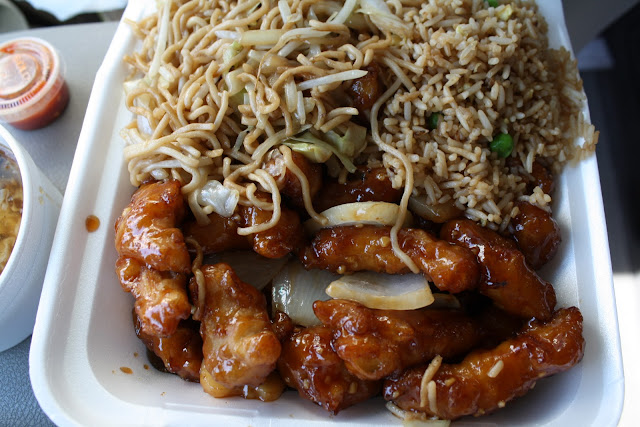 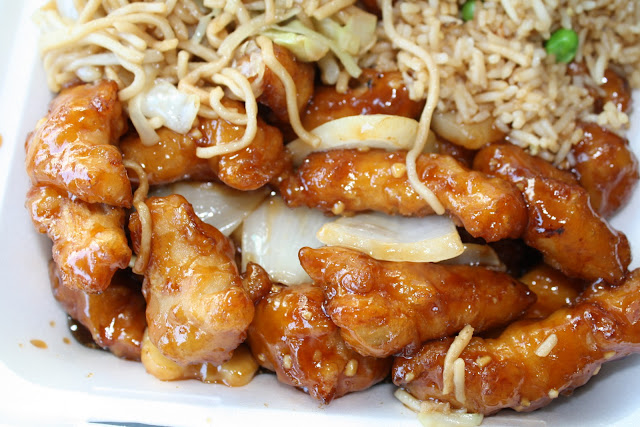 The box was full, as they usually are at these kind of places, although it was immediately noticeable that Egg Roll Express doesn't give you as much of the protein as a place like China Express. But there was still a good amount, so I tried it. 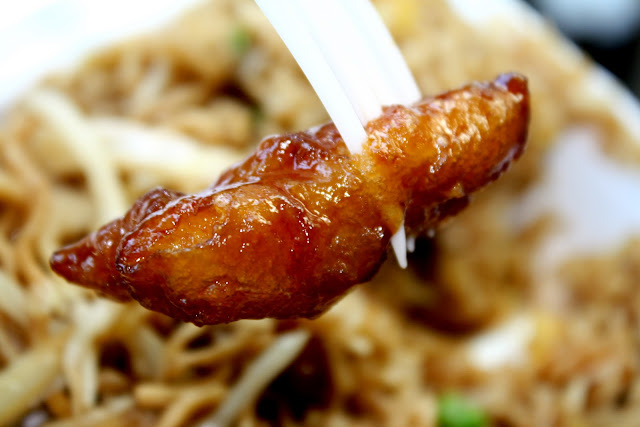 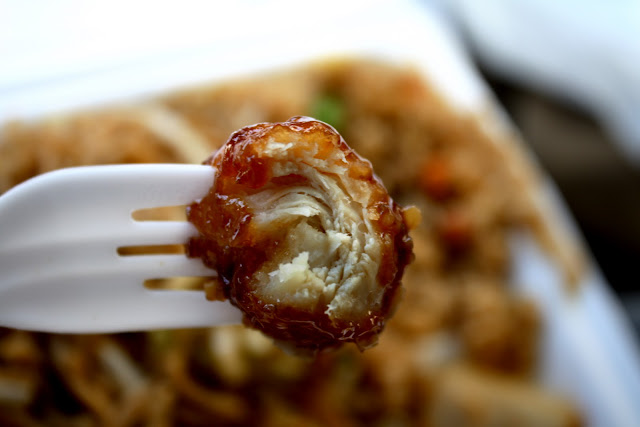 The chicken did not have the crispy, caramelized coating that several other places offer, but I'm okay with that. What I'm not okay with, however, is rubbery, flavorless chicken. And that's what this was. Actually, that's not quite accurate, it had a bit of a flavor: burnt orange. It was a slimy sauce tasting only of that.

I sent a text to a friend of mine at this point, someone who used to live close to Egg Roll Express. I told him I was not impressed. He wrote back one word: "Bland." 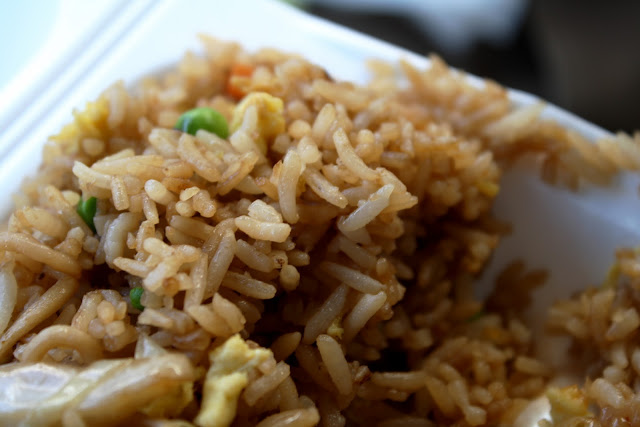 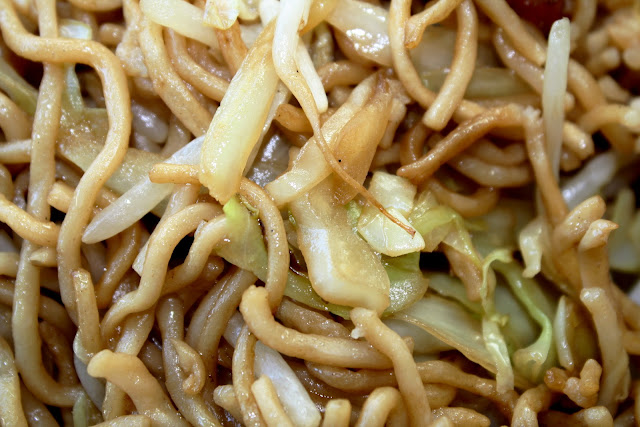 And that's before I got to the fried rice or the chow mein. I took a couple of bites of both but could eat no more.

I didn't order a drink with lunch, and fifteen minutes after I ate, I was hit with the most grueling thirst I have had in years. I drank a 20-ounce glass of water without removing it from my mouth, then another four glasses over the next thirty minutes. I know this kind of food is full of sodium and often you need some water to wash it away, but this was like nothing I'd ever tried before. And I'd only eaten about half of the food. I can only imagine what it would have felt like had I eaten all of it.

When it comes to Americanized Chinese take-out, I have three levels:

1) Places I like that I will visit every month or two when the craving hits. Golden China and China Express are perfect examples of this. I don't think I would ever take out-of-town visitors to any of them, and I don't see my friends and I making plans to meet there like we might Din Tai Fung, but they hit the spot for what they are.

2) Places I don't much care for but might visit once or twice per year for a specific purpose. Pickup Stix (when I'm surprising Elizabeth with cream cheese wontons), Panda Express (when I want to write about a new promotion), and Go China (when I want to stuff my pockets with fortune cookies from their fortune cookie wall) belong in this category.

3) Places I visit once and know I will never again return. Egg Roll Express belongs in this category.

i hate chinese joints with nasty egg rolls that are just filled with soggy, wilted cabbage!

I'm sorry.....but I have tried many Americanized Chinese food places in Pasadena and Egg Roll express is one of the best!

The mushroom chicken ( AKA moo goo gui pan ) is really good and comes in a light sauce instead of the dark soy based sauces most dish's get.

Anon: Me too. Similar to the way you can gauge a Mexican restaurant by the chips and salsa, you can tell a Chinese takeout place by the egg rolls. If they can't be bothered to cook cheap cabbage and wonton wrappers the right way, you wonder what other corners they're cutting.

Matt: No need to apologize. These are only opinions. If you've had good food at the place, I am glad. My food was absolute lowest common denominator junk.