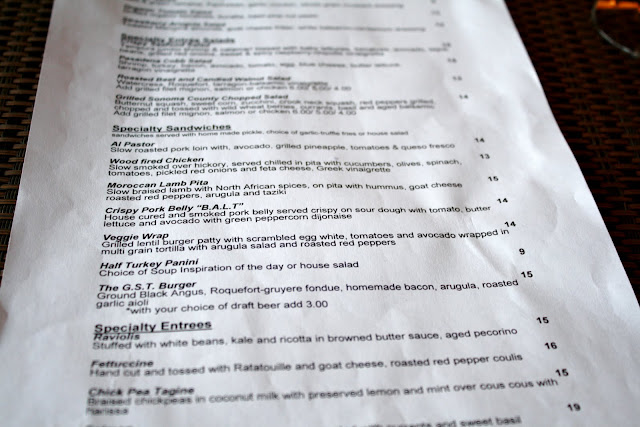 I mentioned in the Weekend Eats post that my friend Geordie Mick was in town for the weekend. My friend Carla and I made plans to meet up with him for lunch on Monday before he had to catch a cab to the airport. He didn't care where we went, just that it was someplace with plenty of good food. (His appetite has always been somewhat legendary.) Carla and I asked if he wanted to try Green Street Tavern and he said sure. Obviously I love the place, as I have written about it many times, and Carla feels the same. But there was another reason: back when Geordie lived here 9 years ago, Kuala Lumpur was in that location, and that was always a favorite restaurant of his. We thought it would be fun if he saw what the new restaurant has done with the place.

I had told Geordie about the Wild Boar Meatloaf Sandwich, calling it the best sandwich I had eaten all year. His eyes lit up and he made a kind of primal sound that can be roughly translated as Mmm, I might have two of those.

So I was devastated - well, okay, maybe just slightly disappointed - to find that it had been taken off the menu.

For all the great meals I have had at Green Street Tavern, I will register this one complaint: they remove their best items from the menu far too frequently. The Wild Boar burger was the best burger in Pasadena, now it's gone. (Although I have to admit I always thought "The GST Burger" was the second best burger in town and has slid easily into the top spot.) The aforementioned meatloaf sandwich, too. The shredded chicken sandwich with roasted corn and cilantro salsa? No mas. The braised short rib sandwich with pickled peppers and Provolone? Gone, baby, gone. Years ago, Elizabeth had the salmon at dinner; she gave me a bite and we both declared it the best salmon we'd ever had. It too disappeared from the menu, replaced by a different, still-good-but-not-great salmon dish. 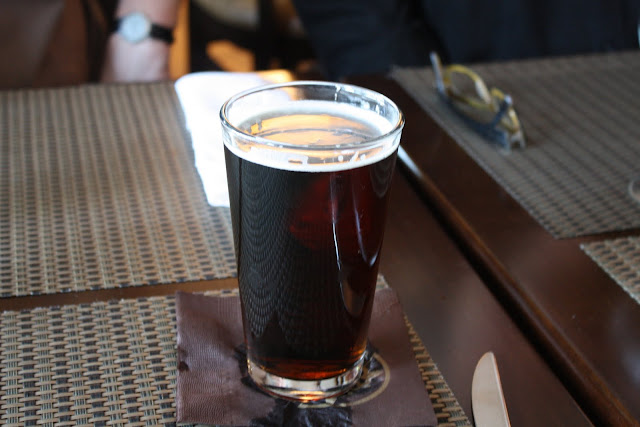 We took seats at a table by the window. My friend Murph's mom was at the next table; I waved hello. I considered telling her about The Frosting Incident, but decided she might not find it as funny as I did.

Geordie announced that he was buying us lunch and encouraged us to have a drink. Carla started to argue with him. I merely said thanks and ordered a Warsteiner. As appreciation I made a mental note to be nice to Geordie for the remainder of the meal, which meant no making fun of Newcastle United. (If you want to see one of the funniest sports clips ever - check out this video of two Newcastle players being sent off for fighting each other.) 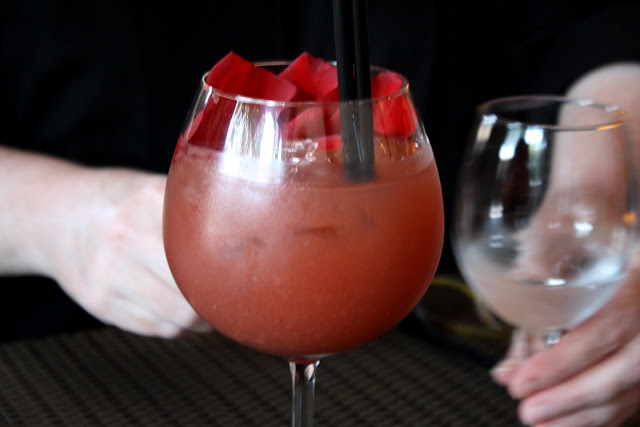 Carla relented and ordered a house-made sangria, which came resplendent with rose petals. She said it was absolutely delicious, not one of those watered-down, inferior-wine sangrias that some places in Old Town serve. 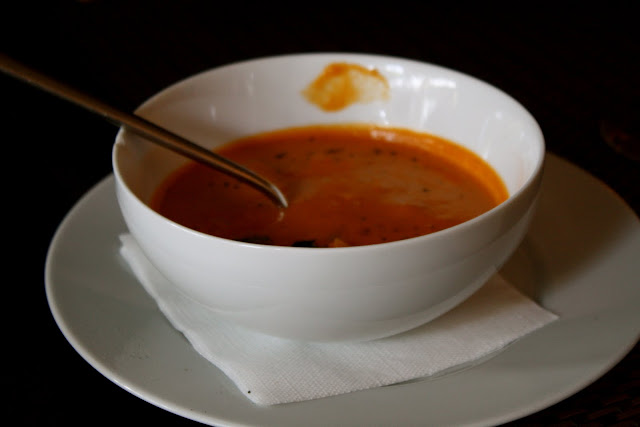 Carla started with a bowl of the Conquistador bisque. On its best days, this soup is my favorite I have ever had. But I wasn't in a soup mood on this day so I didn't order any. 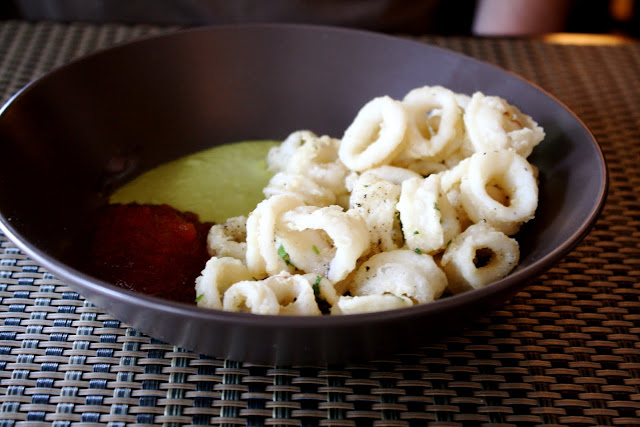 Geordie started with some calamari, and he let me take a few pieces. I don't dislike calamari, but I don't usually like it, either. Most of the time it's just overly-breaded and too rubbery. These avoided both of those symptoms; the breading was light and the calamari was tender.

Plus they served as a great vehicle for delivering the delicious pea-green sauce to my lips, a flavor that I just couldn't place. I thought it might be a mild pepper-mustard, possibly even a (very mild) wasabi-mustard. I inquired of the waiter, who told me it was a chile verde. I never would have guessed that, and I was not surprised when he returned a minute later and said "My mistake; we used to serve this with a chile verde, now it's a green chile aioli." 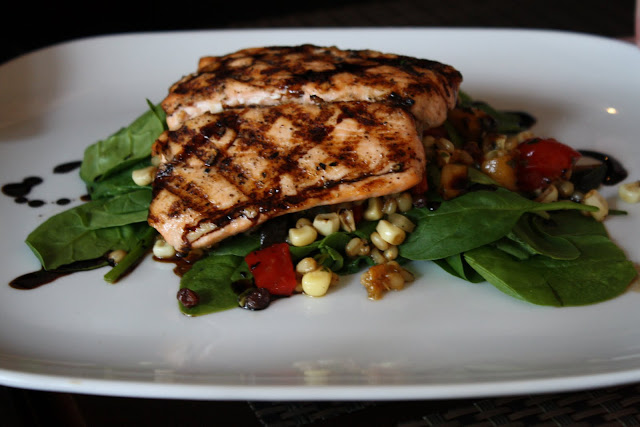 Carla had the Sonoma County chopped salad with salmon. The salmon looked like it was cooked perfectly, and she loved it, not leaving a bite on the plate. I never order salads in restaurants, but damn, I definitely could see myself ordering this. 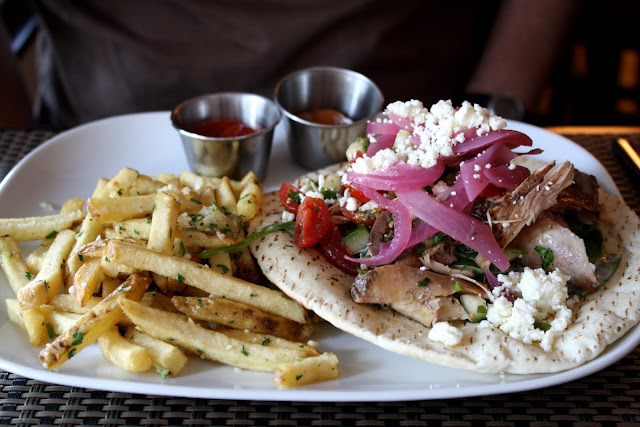 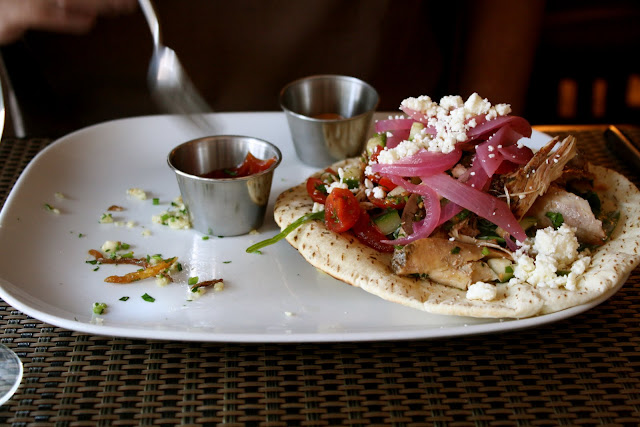 He polished off his fries before touching his sandwich. "Saving the best for last," he explained, though he agreed with a statement I had made earlier that Green Street Tavern's fries are great. But he loved the sandwich, too. He started by picking at the chicken and toppings until the pita looked manageable, then picked the whole thing up and ate it like a taco. There was nothing left on his plate, either. 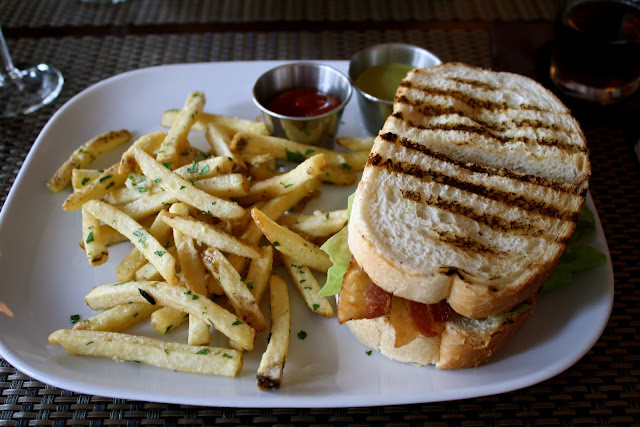 With the loss of the Wild Boar Meatloaf sandwich, I considered getting "The G.S.T. Burger." But I've already had that several times this year, and I wrote about it two months ago, so I decided to try something new: the "Crispy Pork Belly B.A.L.T." The crispy, smoked pork belly comes on grilled sourdough bread with lettuce, tomato, avocado, and a green peppercorn dijonaise. 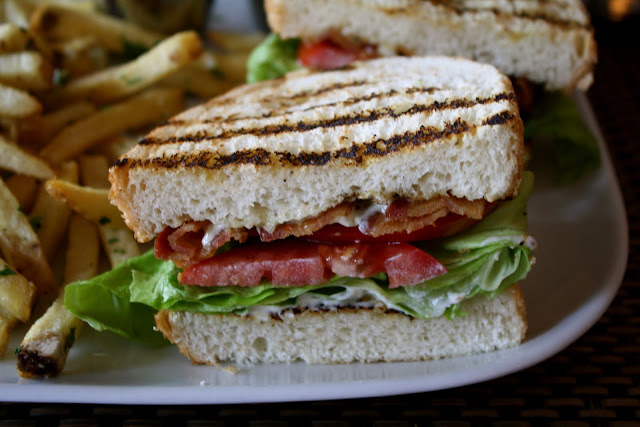 I had to order the sandwich without avocado. There's just no way I will ever eat one of those again unless there is a lot of money or someone's life on the line. But I didn't want to order it without avocado and tomato. That would just be a bacon sandwich. Just give it a try, I thought. So I took one bite with tomato. It was terrible. I removed all the rest. 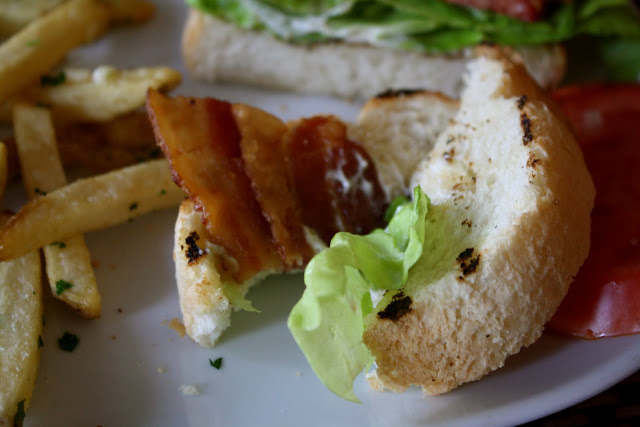 The pork was delicious, though. I could have eaten twenty of these strips. 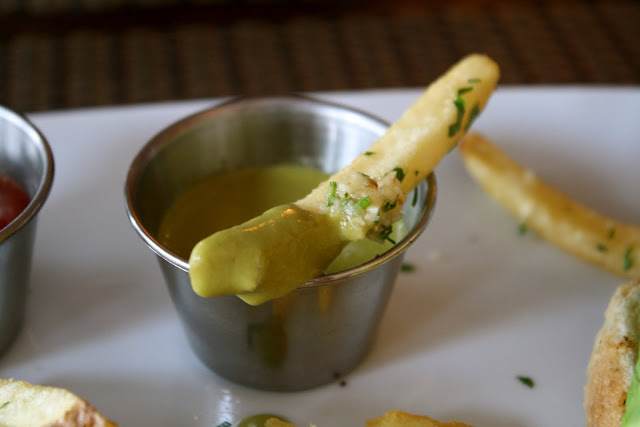 I requested some of the green chile aioli to accompany my fries, and it did the job beautifully. 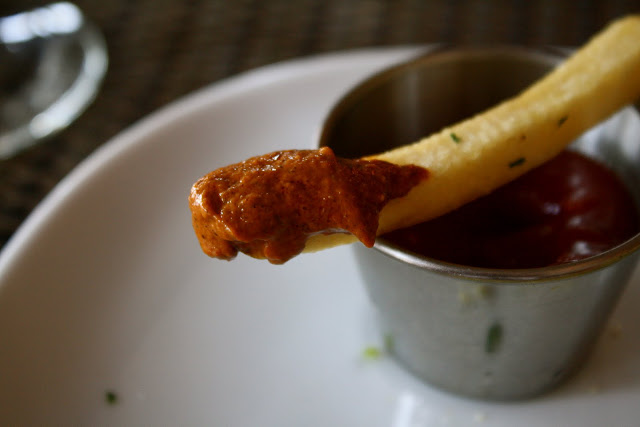 I tried some of the harissa sauce that accompanied Geordie's sandwich, and it was good, too, but not as good as the aioli. 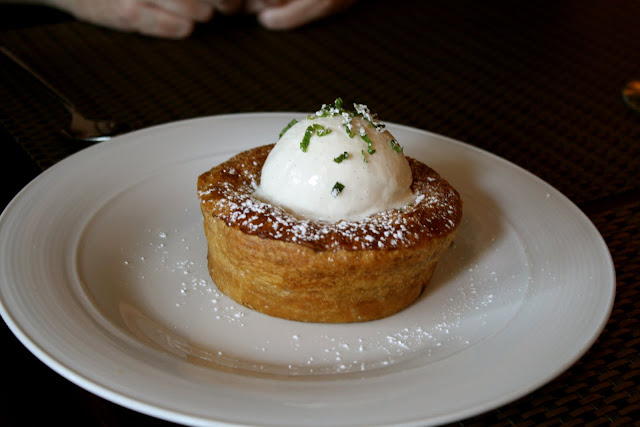 Neither Geordie nor I wanted dessert, so Carla announced that she wasn't going to have any, either, but we each told her we would take a bite of whatever she ordered. She requested the dessert special of the day: strawberry and rhubarb pie with ice cream with fresh mint. 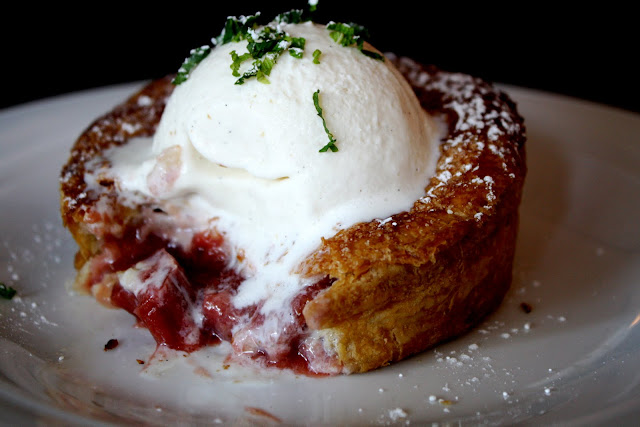 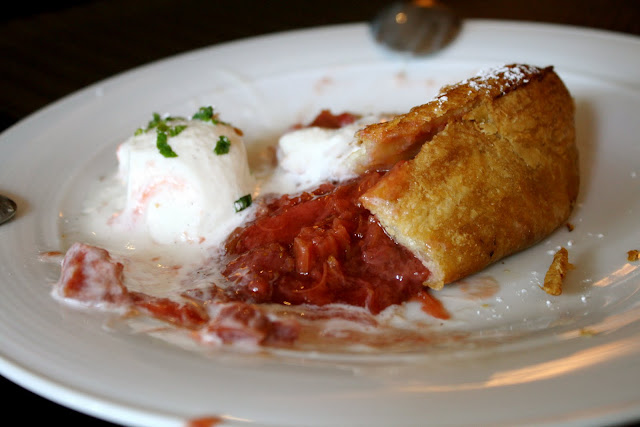 It was delicious. I didn't have more than one bite of pie - it was so rich and sweet, I don't know how anyone could eat the whole thing - but I had several bites of the ice cream, which was the best I have had in a long time, maybe years. Little depth charges of mint were in each bite, a refreshing blast of flavor.

We talked briefly of the things we used to order in this room many years ago when it was Kuala Lumpur. As full as I was, my mouth still watered remembering the mee goreng, always ordered "extra spicy," and the puteri rolls and curry laksa that I might sacrifice a digit to be able to eat again one more time.

I didn't realize Old Town had such a delicious Gastro Pub! Can't wait to try it out. What are some of your other favorite Gastro Pubs in the surrounding area? You are somewhat of a Gastro Pub aficionado wouldn't you say?

To be honest, I don't even know what the term means anymore. I always thought it was a pub that served high-end food, but now it seems like many places bill themselves as gastropubs even though they are nothing more than restaurants with a few interesting beer choices.

Of course, I have no problem with that definition, it just feels like the word has lost some of its punch. King's Row bills itself as "Pasadena's first gastropub," although I went to Gordon Biersch more than one hundred times, and their food was about as good, their service better and their prices much better.

Haven Gastropub will probably be opening by the end of the year. There is one in OC - my brother hates it and my buddy Nick likes it. I can't wait to see what I think.

However, if we call Green Street a gastropub, I am sure I will still call that my favorite.

I am making the photo of Carla's salad my background for the rest of the day. What wonderful pictures!

These photos are awesome. And that harissa sauce (no idea what it is!) looks delicious.

I had a question for you! Are you much of a reader? I'm reading that book called "Mindless Eating" and it's about how, well, we don't truly think about what/how much we're eating or really tasting. How sizes and brand names and pre-existing expectations can affect our like or dislike for food/the quantity we eat. I was just wondering if you'd read it or would be interested in reading it. It would be cool if you could do a small social experiment with friends to see if they could pass/fail some of the studies in the book (like telling people to rate a strawberry yogurt after eating it in the dark - but giving them chocolate and listening to their reviews of how it's the best strawberry flavor ever).

Did you just eat a pork and dijonnaise sandwich? Because...I think that deserves a slow clap, John Hughes style. Such a simple idea but so freakin brilliant

Michelle: Sounds good to me.

Diana: Yes, I read all the time. I will add that to the queue. However, there is no chance in hell I will be doing food experiments with my friends. No offense, that just doesn't sound like any fun at all.

Fritos: Well, there was lettuce, too.

In the future, unless there is a little mini-pie waiting at home for me, I don't not want to see pictures of something looking so damn tasty.

Well, then... I wouldn't recommend checking my blog tomorrow if you don't want to read about Joey's and my trip to Pie 'n Burger today...