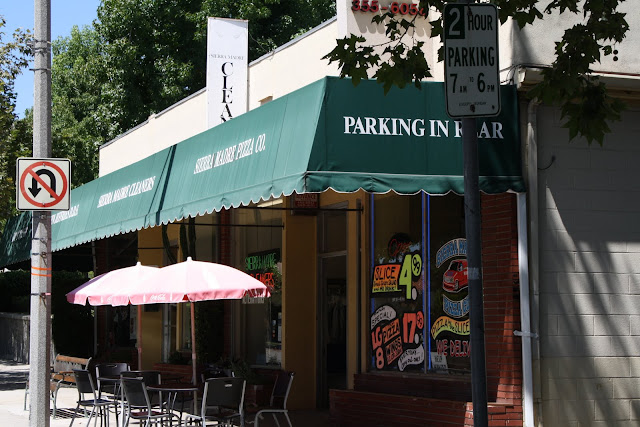 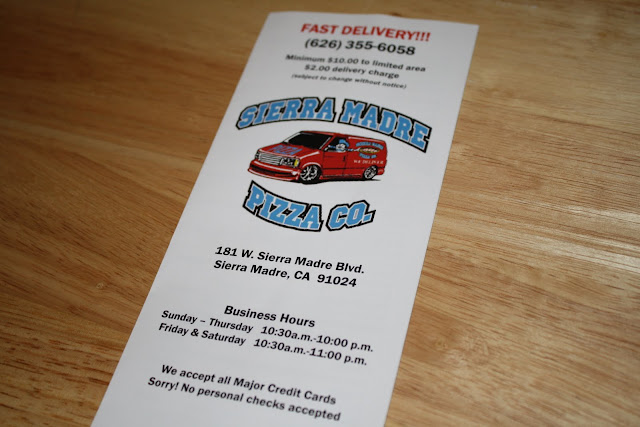 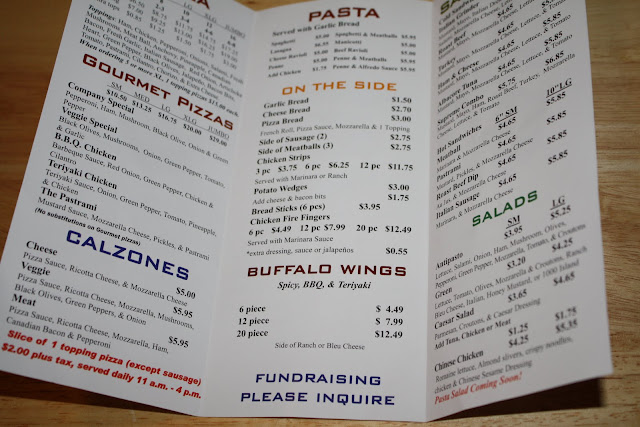 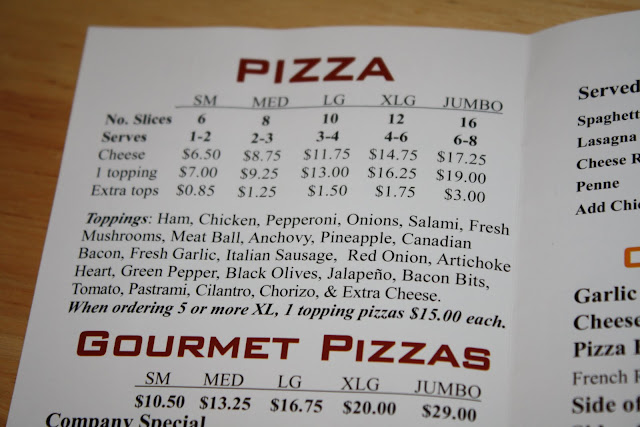 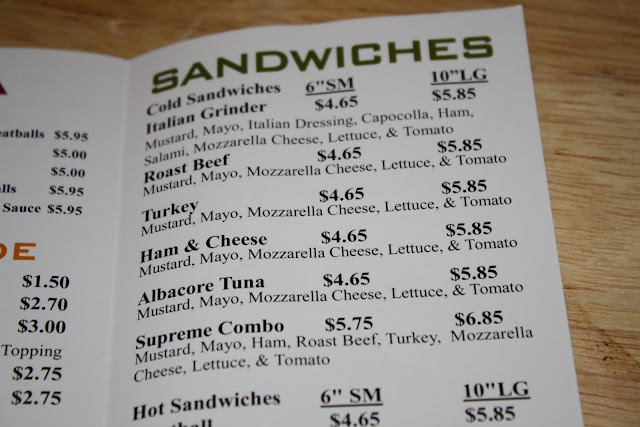 There was a time when I ate at Sierra Madre Pizza Company at least three times per week. Sometimes it was just a slice (or two), sometimes I split a pie with a co-worker, sometimes I ate one of their sandwiches. I was partial to the pastrami. But then I stopped working in Sierra Madre. More than three years ago I moved to South Pasadena and, other than the occasional trip to my parents' house or Taylor's Prime Meats, I have not thought about the Pizza Company at all.
The other day I was over at my parents' house, however, and talking about what to do for lunch with my mom. We briefly considered going out to a restaurant, but then I suggested splitting a pizza from the Pizza Company, my return to their pies after several years away. That was just fine by her.
My mom likes her pizzas with all kinds of veggies - mushroom, olives, all kinds of stuff I don't like. I asked if we could just get one with sausage. She said sure. I called up and ordered it - after all those years of calling, I still had the number memorized (although in Sierra Madre you only have to remember four numbers, as long as you can determine if the prefix is "355" or "836") - and the guy on the other line told me it would be 15 minutes. I drove up to Sierra Madre Blvd to pick it up.
It actually took 21 minutes, but I didn't care. It was air-conditioned inside the restaurant and there was a baseball game on the television. I was more than happy to wait. To be honest, I'm surprised it only took 21 minutes - the whole time I was there, the phone was ringing at least once every minute. At one point there were thirteen people crowded into the small (perhaps 15 ft. by 15 ft.) dining room. 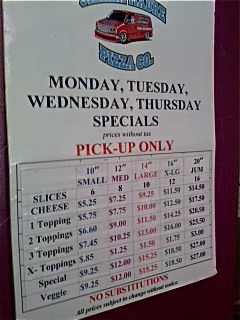 I noticed this sign posted on the wall so I used my phone to take a picture, which is why this picture sucks. At any rate, SMPC has some excellent Monday-Thursday deals, and the one-topping, extra-large pizza my mom and I ordered was only $12.50. (That price is only available for pickup, although that's just fine by me; the pizza that Tracie bought for me on Saturday was the first time in years that I have actually had a pizza delivered, and the only reason I had that delivered is that's I'd had several beers.) 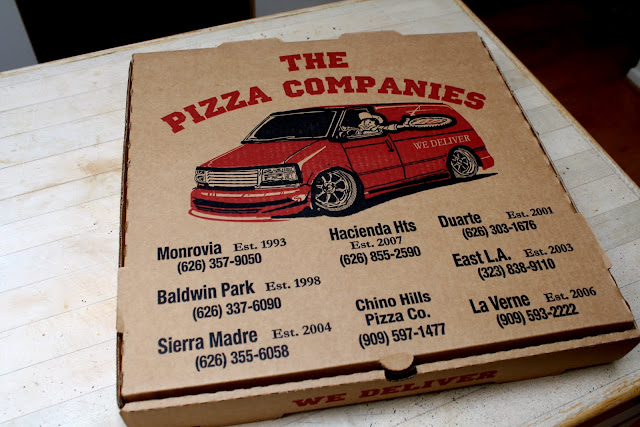 As you can see, there are several Pizza Companies in different cities. 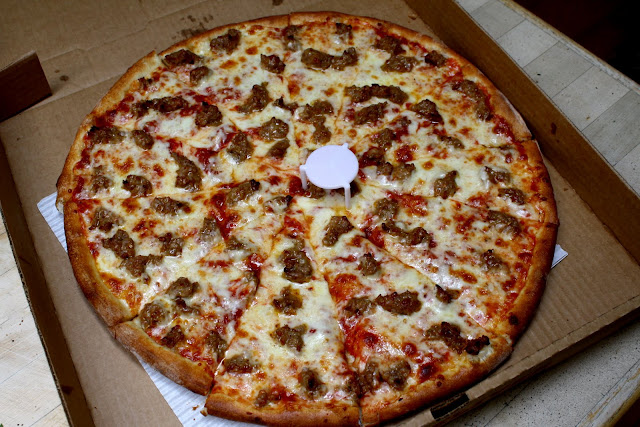 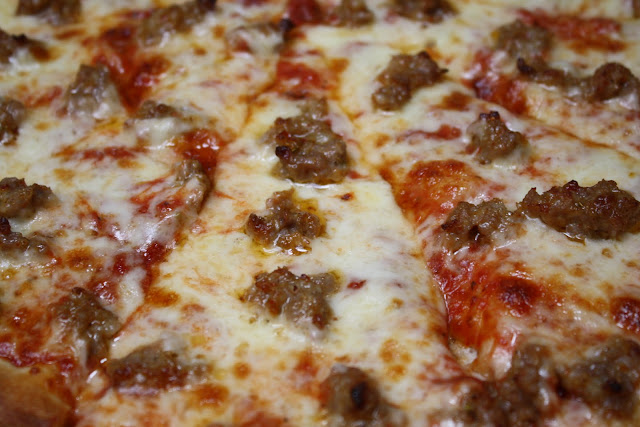 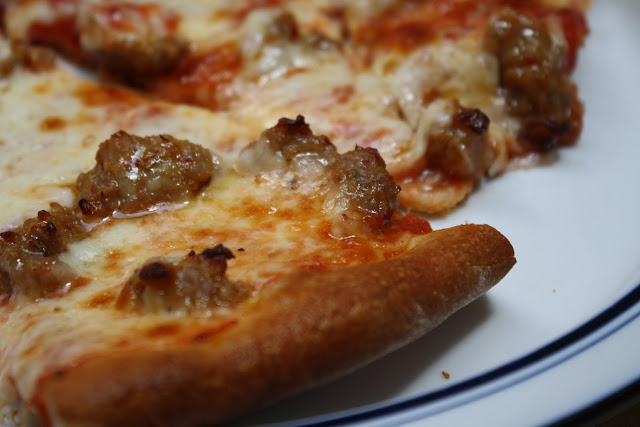 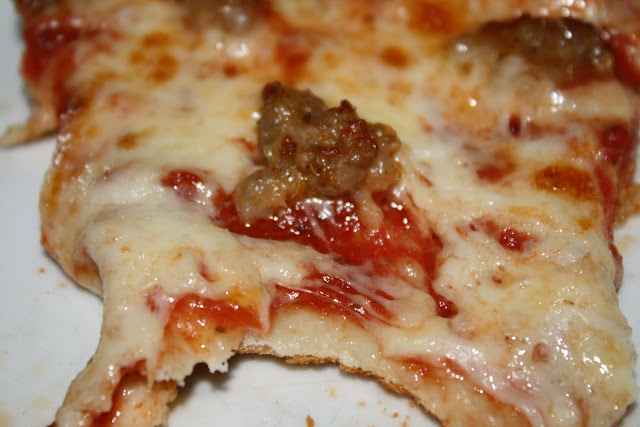 The pizza SMPC usually serves is a thicker crust than this, but I have always found that version too doughy, and request thin-crust. (This still isn't pliable, New York-style pizza; it still has a certain amount of thickness to it.) The sauce doesn't have a whole lot to it, I would prefer a little more spice, but everything else about the pizza is very good. The cheese is gooey and there is plenty of it, and the sausage is tasty: slightly spicy without going overboard.

I wouldn't call this pizza great. It's nowhere near as good as the Mamma's pizza I wrote about on Monday. But it's still good, the prices are very reasonable - the two of us together didn't finish this extra-large pie - and all of the employees are friendly. (The guy behind the counter saw that my pizza was taking longer than he'd told me and he offered me a soda on a very hot day.) Guys in construction outfits were coming in and grabbing two slices and a drink; a mom with six kids was getting an extra-large pizza and a bottle of soda. You may have never been to this pizzeria before, but I bet you've still been here, if you know what I mean.

Domino's in SM is closed? Huzzah! Now if only that Starbucks would go away.

Starbucks is always crowded, but Bean Town is too, so I don't think it's in trouble.

True, and it's kind of douchey of me to hope that any place that is employing people closes, even if it is a Starbucks.

Well, if the space sits vacant and those jobs just disappear, that's a fair point. But what if they opened a yarn and kitten store in its place?

I gotta give your creds for eating weak sauce pizza like this when you make such uber echelon pies. Nostalgia is a powerful thing! Anyway, I commented back on your comment on my post, but we should totally rally in p-town... will try to find your email.. you can email me at bananawonder@gmail.com we can go on a justins double. And btw, I was about to be named Elizabeth but my parents didn't want to copy another family memb.

I was gonna be named Anna but my parents didn't want a feminine boy. And yet...

The new layout is awesome by the way.

Thanks, Julien. I got two email requests last week - one person asking me to make the posts wider, one asking if I could make the photos larger. Those seemed like simple enough requests.