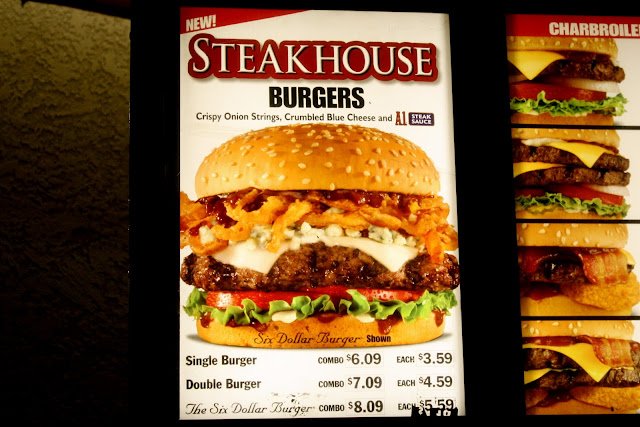 It's no secret that I don't think much of Carl's Jr. Their much-hyped turkey burger was the worst turkey burger I have ever had - possibly the worst burger of any kind I have ever tasted. Their habanero-bacon cheeseburger had zero heat; their hand-breaded chicken strips were no better than any truck stop's; their prime rib burger was a monstrosity; their Philly cheesesteak burger is in contention as the ugliest fast food burger I have ever had. The only two things I can think of that I didn't mind are their chili cheese fries and their Kentucky Bourbon burger and, looking back at those posts, I am amused to see that the adjective I used to describe both was "Okay."

Carl's Jr. seems to spend their money on commercials, not product development. Still, when I read about their new steakhouse burger, advertised with the are-you-f**king-kidding-me tagline "Tastes like it's made by the God of Hamburgers," I decided to give it a try. (With more than 4,000 views in slightly under six months, the post about the turkey burgers is the most popular one I have written by a wide margin. Obviously lots of you want to read about these things, and I am a servant to my readers.)

I went through the drive-through and ordered the "Six Dollar" version of the burger. I'm not sure why; I had a brain freeze. More on that in a minute. The total was $6.08. (Pulling up to the window, my thought was Wow I can get two burgers at In-n-Out for that price. I doubted this would be better, but I was willing to give it a shot.) The girl at the window handed me the burger in a remarkably short time. 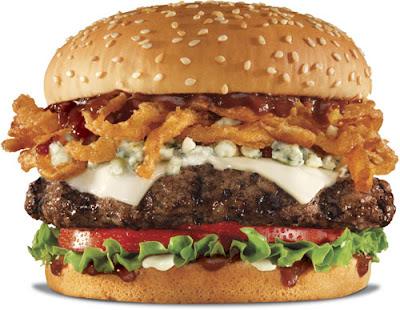 This is what the burger looks like in the promotional ad. 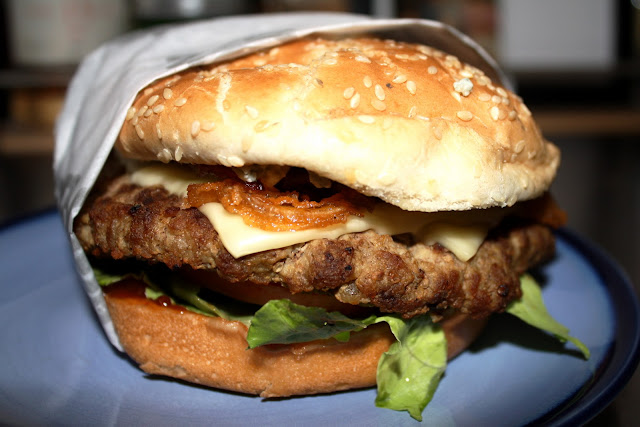 And this is what the thing looks like in person. Now, that's not entirely fair; no burger actually looks like it does in an advertisement. But the contrast between the juicy, fresh-looking patty in the ad and the grey, floppy patty in front of me was startling. 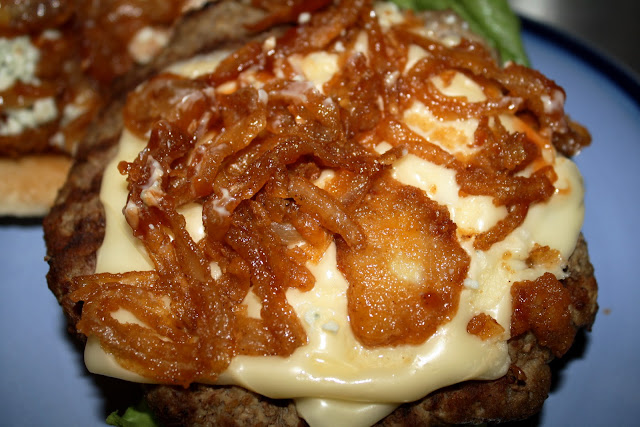 The "crispy onion strings" were more like greasy onion noodles. They didn't taste bad... they didn't really taste like anything. Except grease. 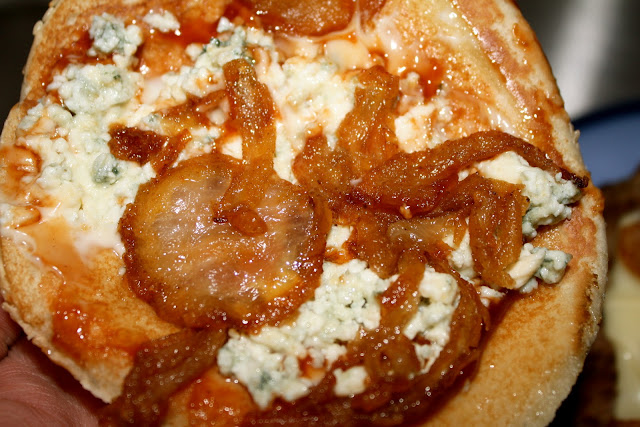 The blue cheese was the highlight of the burger. Too often - especially when dealing with fast food - blue cheese is one of two things: overpowering or completely flavorless. This was a nice balance and would have been a good complement to the A.1. steak sauce... if there had been more than a drop of the sauce. 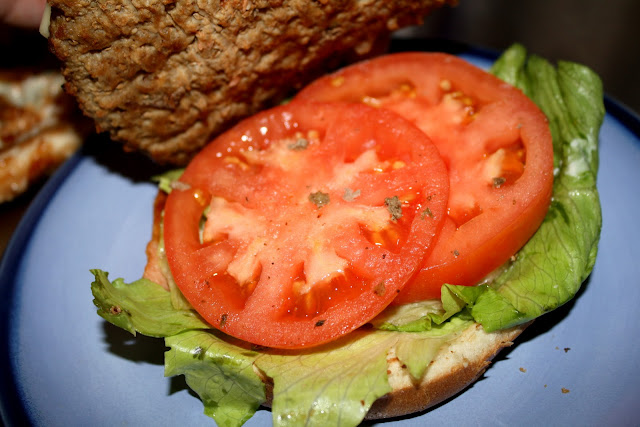 Most of the burger's height came from the two slices of tomato: together they were an inch thick, far thicker than the beef patty. But of course I got rid of them. 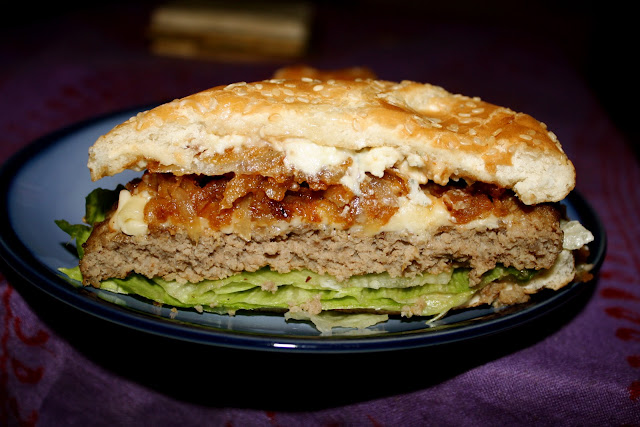 So this is what a cross-section of my burger looked like. 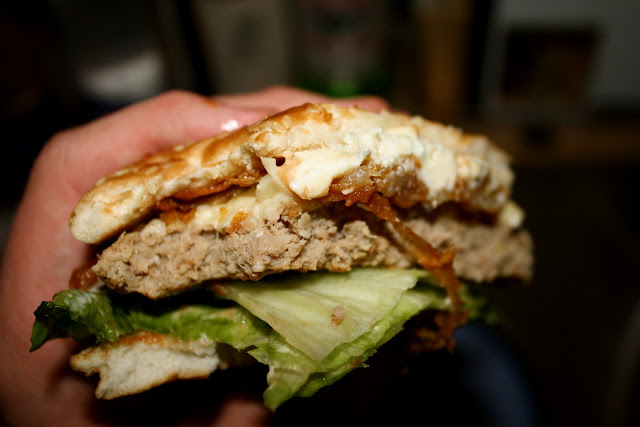 With a better bun and higher-quality meat, this would not be a bad burger. But that's like saying "If Shaq had stayed in shape and practiced free-throws he would have been a better center." It is what it is. And the bottom line is that the bun was the same two-days-past-fresh-tasting bun that every Carl's Jr. burger utilizes, and, more importantly, the beef patty was terrible. I don't know why I ordered the thicker patty. This happened the last time I tried one of these Six Dollar burgers a few years ago: I thought 'Wow, why did I think I would actually want more of this meat?'

I suppose I liked the Steakhouse Burger more than most that Carl's Jr. offers - the lack of bacon and American cheese is addition by subtraction and I enjoyed the blue cheese - but that's not saying much. When you factor in the cost and the 1060 calories and 67 grams of fat, this is not something I recommend nor anything I would ever eat again.

It's been six weeks since you've made a burger, I think it's time!

As we cross the country, we've now switched from the land of Carls Jr to the land of Hardees. Hardees has the same promotion going, complete with a large cardboard "god of burgers" character in the restaurant. I ignored the new burger and ordered some chicken tenders and was surprised to find that they were much worse than the ones at the Pasadena Carls Jr. Sad to say the least.

Why does this chain need two names?

According to wikipedia:
In 1997, CKE Restaurants acquired Hardee's, a restaurant chain with 2,500 locations in the Midwest, South and East Coast regions. Hardee's restaurants are gradually being converted to be more like Carl's Jr. with some of the same menu items and even adopting the same star logo.

Oh, and according to thecaloriecounter.com, two medium 1/4" thick slices of tomato contain about 8 calories. So your burger is probably a little closer to 1050 calories. Eat away.

Those are some good looking tomatos. I think you should have given them a try :)

Really though, it sounds like too much is going on with this burger. Could blue cheese, steak sauce, and bacon not have worked? I find swiss cheese flavorless at ff places, and hate how Carl's/Hardees' must add mayo to everything.

But yea, mad props for ballsing up and throwing down 1050 calories on mediocrity. It's 1050 calories I ain't going to spend, and for that I salute you.

Michelle: That can be arranged... but not tonight!

Ben: Good to hear from you. Was just looking at your blog this morning. Watching Angels-Jays right now.

Adam: They actually were surprisingly good looking. But still not for me. I think their main purpose is to make the burger look as thick as it does in the ad.

To be honest with all of you - I only ate half the burger.

Their Santa Fe chicken sandwich is pretty good. That's the extent of their above average menu items.

wow, again way to take one for the team, bro. first of all i really like your comparison photos advertisement vs. reality. secondly, i actually like carls jr, but i never ever ever eat their burgers - i am all about the taco salad and occasional chili cheese fries/shakes/fried zucchinis.

when you come to PDX you gotta do a burgerville review. burgerville is my fav fast food of all time. ive been getting blackberries shakes at least once a week while they are in season.

on another note, there is a surprise waiting for you at ol banana wonder: http://www.bananawonder.com/2011/09/seven.html

Justin: I haven't had that in years. I used to really like the chicken, pepper and sauce, but was never a big fan of the honey wheat bun. But maybe I should try it again?

Anna: Yeah, their chili cheese fries aren't bad. I've never had the taco salad, though. I've seen Burgerville many times but never actually eaten at one.

The honey wheat bun is the weakest part of the sandwich. However, it's better than anything else on their menu. Sometimes, if you get a less-than-sassy clerk, they'll let you get a different kind of bun!

Tried it last night. Not impressed.

That's funny! I didn't even think about that. Remember Conan used to do the "In the year 2000 sketch," and then when the year 2000 came and went, he just kept right on doing it the same way. That's what Carl's Jr. is going to be doing in a couple of years when they are charging eight bucks for their six dollar burger. "Tastes like a burger you would pay six dollars for... even though we're charging you eight."