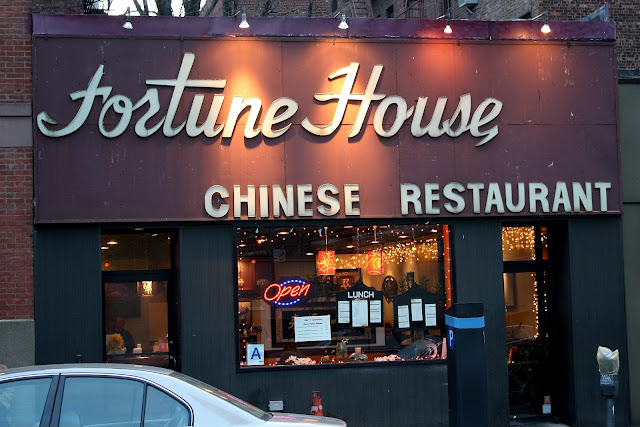 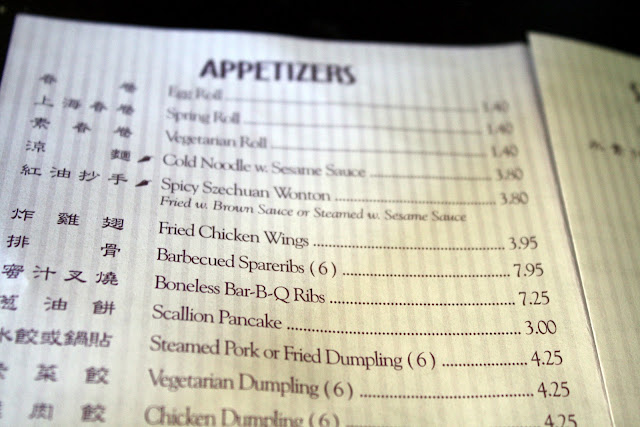 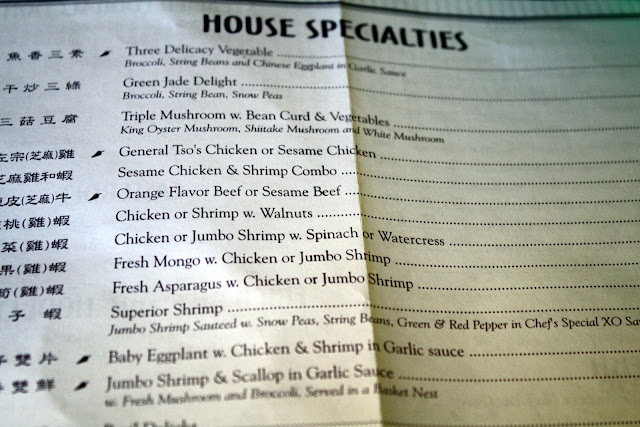 It had been an interesting first two hours in New York City. It took me a long time to find a parking space by our new place; I saw the parking sign and thought we were fine, however I could not see the "No Parking Between 8-8:30" sign that was obscured by a tree branch. We got a ticket. I was briefly detained by the police: apparently one-handed-opening knives are illegal in New York City. (I had been carrying boxes upstairs while the officers were getting coffee and donuts - no, I'm not making that up - right outside my building. They let me go with a warning when I told them I was using the knife to open my boxes and promised I would not take it out in public ever again.) A man on the corner started talking to me without provocation and advised me to "Never go to Riker's Island because the food sucks and there ain't no bitches there." I had not planned such a trip but I guess it's good advice anyway.

So by the time everything was out of the car and I was ready for food, I didn't want to go out anywhere, I just wanted to sit in front of the computer and watch a baseball game. We were eating with Elizabeth's dad and he suggested Chinese food. I've never turned that down, and Elizabeth has told me for some time that she loves a place in Brooklyn Heights called Fortune House. I said we would walk over, order the food, and bring it back with us.

I placed the order with an unfriendly woman at the counter; just before she gave me my total the phone rang and she picked it up and took another person's order. I stood there for more than five minutes waiting for her to take me my money. (A few minutes later, when she wordlessly handed me our food, I looked at her and said "Thank you." She silently turned and walked away.) 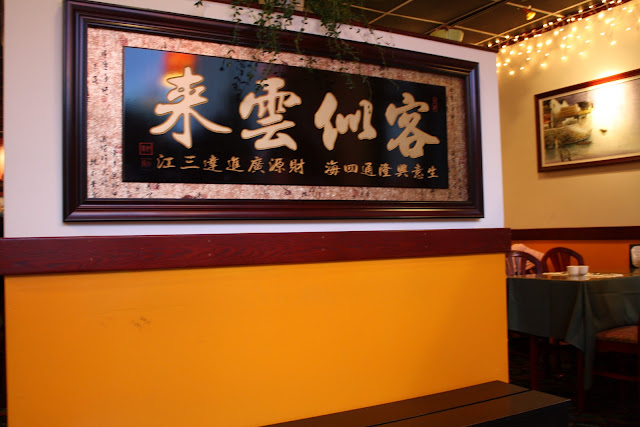 We sat on a bench for a little more than ten minutes waiting for our order. Considering how busy the place was - customers were coming in at the rate of one every minute - the ten minute wait was not bad at all. We walked the couple minutes back to Elizabeth's uncle's place and opened our food. 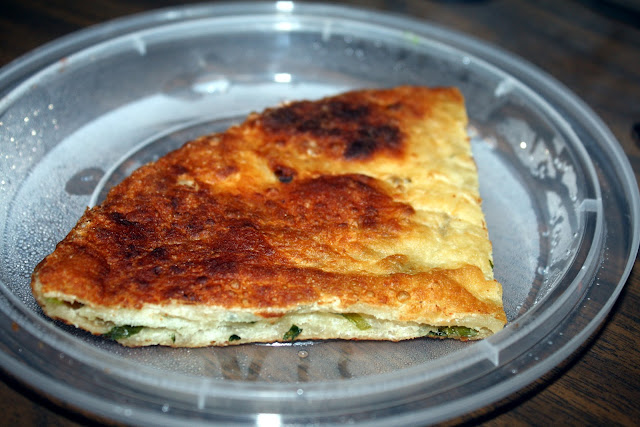 I started with a scallion pancake. It needed more scallions but it wasn't bad. 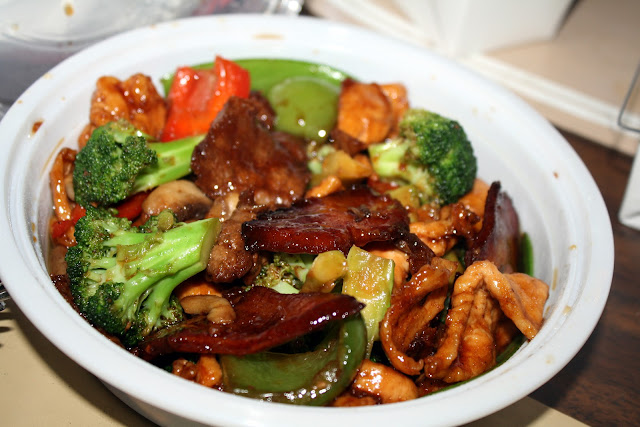 Rick ordered the Happy Family: chicken, pork, beef, broccoli, snow peas, bell peppers, and mushrooms in a brown sauce. He was quite pleased. 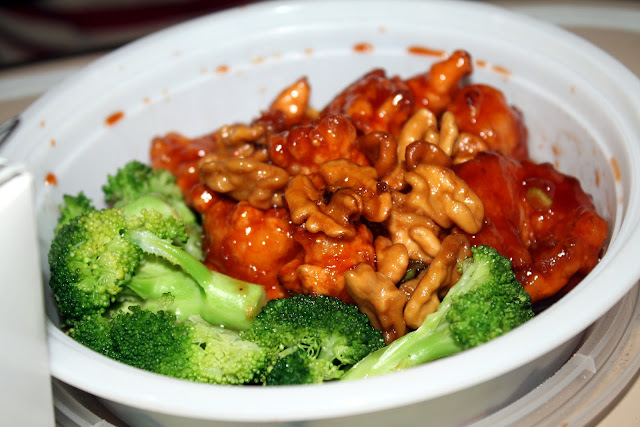 Elizabeth had the shrimp with walnuts and she loved them. She gave me a shrimp, it was delicious: plump and juicy. 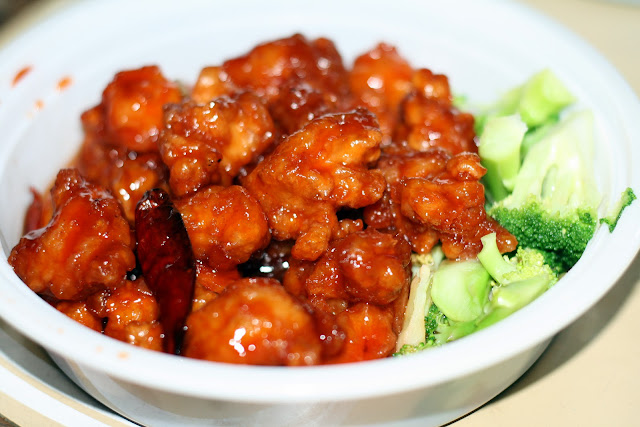 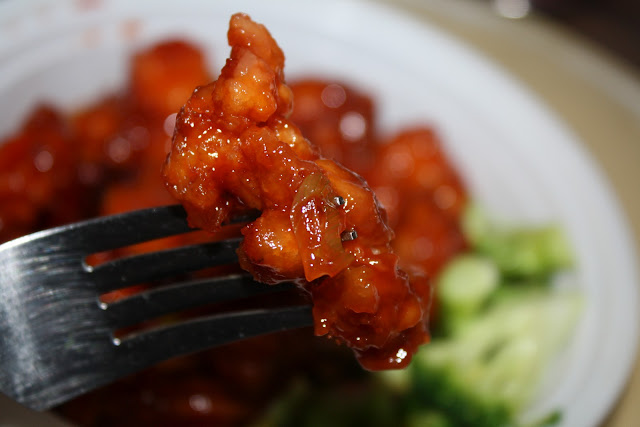 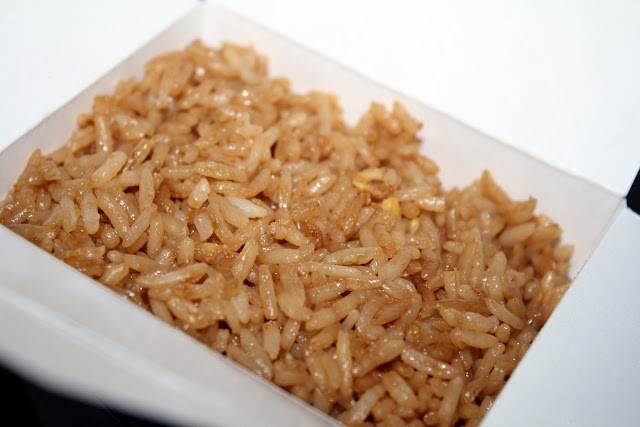 I had the General Tso's chicken. I really liked the flavor. Too often, General Tso's tastes like orange chicken with just a touch of soy sauce. This was a tasty sauce of chili pepper and garlic.

I liked the food from Fortune House but I was not impressed with the service and I felt the portions were on the small side. True, I may have been spoiled over the years by the entrees I would get at places like Golden China or China Express, but I'm not used to dishes that set you back ten (or eleven, in Elizabeth's case) dollars being served in a plastic dish smaller than a cereal bowl.

But, as I wrote, I thought the food was better than average, so I made a note to return and try one of their lunch specials. A few weeks later, I did. 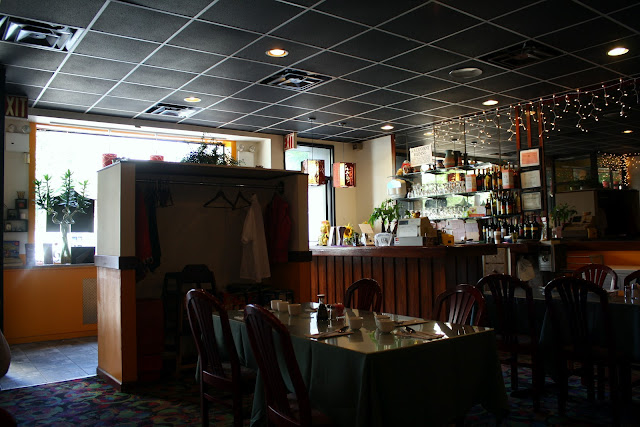 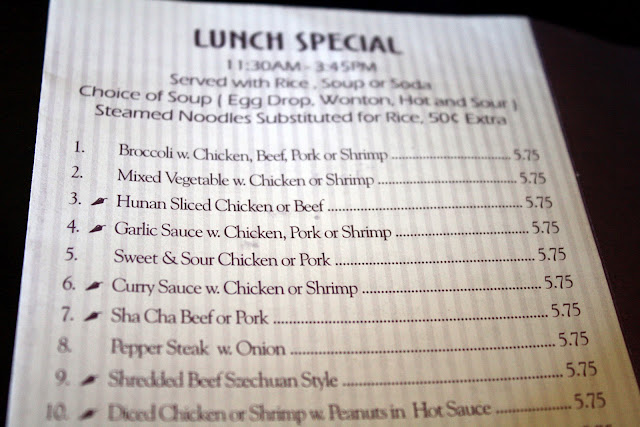 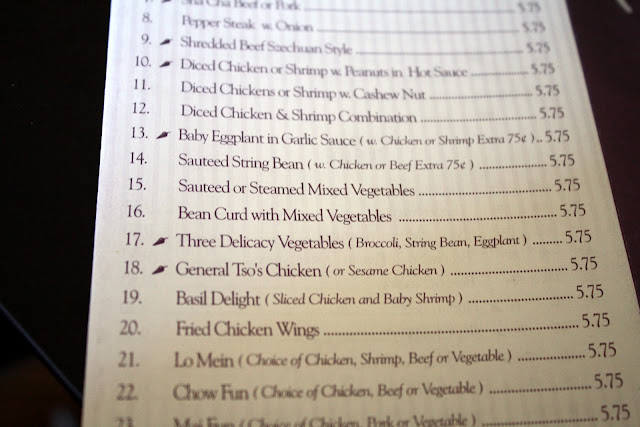 It was a hot afternoon, close to 2:30, and only one other table occupied in the restaurant. 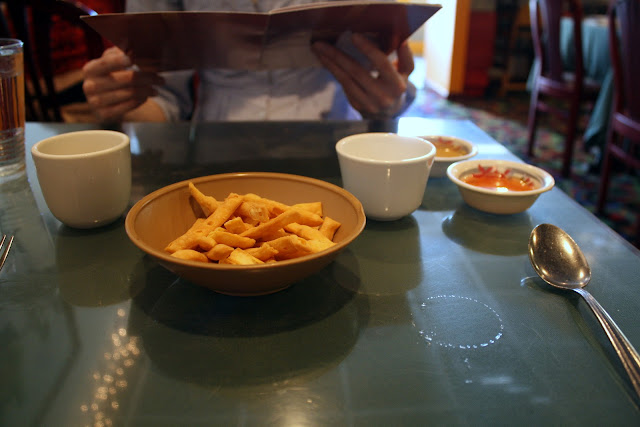 Just a few seconds after we sat down, the waitress presented us with a bowl of wonton chips and a pot of tea. Already I was liking this occasion more. 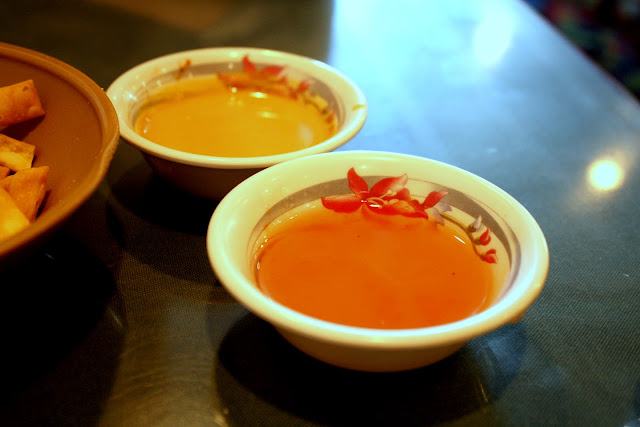 The hot mustard and sweet & sour sauce were very good. 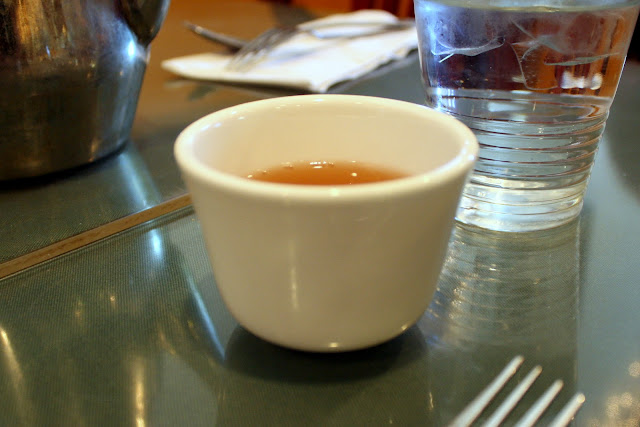 The tea was not good. Much too weak. 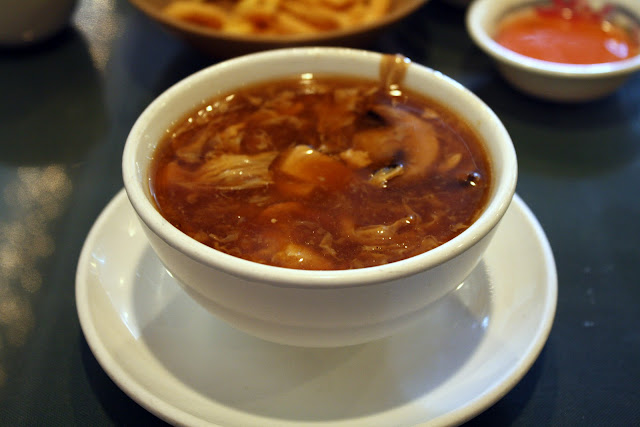 On the other hand, the hot & sour soup was delicious. Unlike many similar soups that are so gelatinous you can stand a spoon up, this version was thin, with a vinegar touch that actually made it slightly spicy. 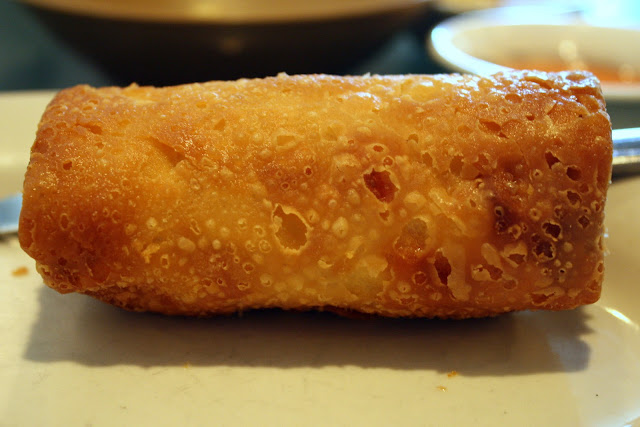 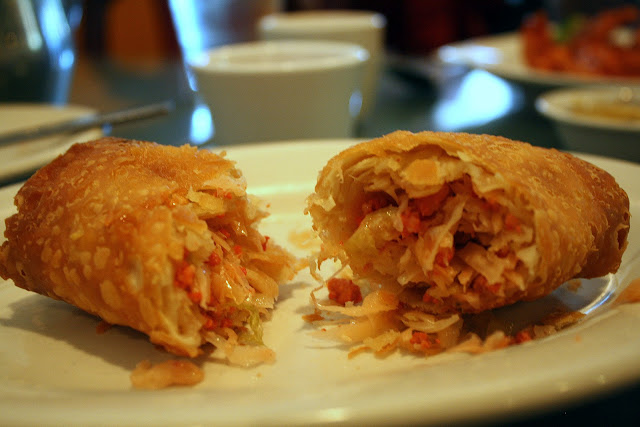 I ordered an egg roll - they are sold a la carte for $1.40 - just to give it a try. It hit the table so hot it was still sizzling. I decided to share a bite with Elizabeth once it cooled down; after a minute I put my hand on the roll to cut it in half. It was too hot to touch.

It was fantastic. The insides were cabbage, veggies and shrimp. I can count on one hand the number of restaurant egg rolls I have enjoyed more in the last four years. I immediately ordered another one so that we could each have an entire egg roll. 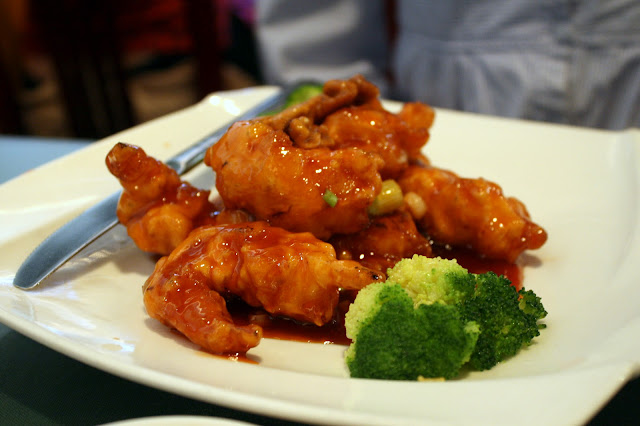 Elizabeth again got the shrimp with walnuts. When she finds something she likes, she sticks with it. And there's nothing wrong with that - the shrimp were once again great. (This time I got at least two pieces.) The spicy sauce was fantastic, too. I dipped two bites of the egg roll in it and it complemented the egg rolls nicely. 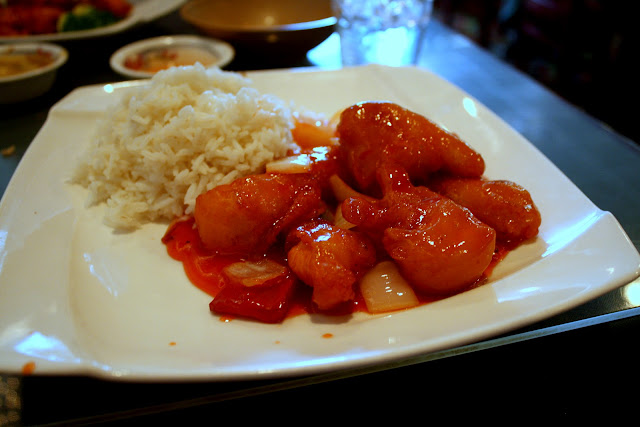 I order the sweet & sour chicken. The white meat chicken was good, but overall I was not a big fan of the dish. I have written many times that sweet & sour chicken is almost always only sweet, with never any sour to be found. This dish took that statement to the extreme: this was a super-sweet sauce that almost made me cringe. I drizzled a little of the hot mustard over the chicken to mute the cloying flavor. It worked, but the combination of flavors was not pleasant.

At least this chicken dish - which again was probably half the size of the lunch specials I used to get back in the San Gabriel Valley - was only five and a half dollars.

Overall, I like the food at Fortune House (and I love the egg rolls) but I don't plan to make it anything more than a lunch destination. There are so many Chinese places around - not just in Brooklyn Heights but within a one-mile walk - that I am going to keep trying new places.
Posted by JustinM at 9:30 AM

Glad to see The SGV holding its own up against The Big Apple. I can hardly blame you for (already) missing the place.

Well, Rob, the Chinese and tacos haven't been up to what I'm used to... but the pizza mitigates the longing.

Let the tea steep. Its not like they poured hot, fully brewed stuff into the pot.

I let it steep for several minutes. The end of the pot was as weak as the first sip.

You're on the East Coast now, my friend. That's duck sauce, not sweet and sour sauce. :-)

I had the opposite experience as you, moving from New York to the West Coast. I wrote a column for my local paper about the differences in Chinese food I've experienced. Not having duck sauce here was one of the most traumatic adjustments I've had to make:

I thought duck sauce had a fruit base, like pineapple or apricot. This sauce had neither. Or do you simply call anything resembling sweet & sour sauce "duck sauce" when you're on the East Coast?

BTW I liked your article. When Elizabeth's mom used to visit us in SoCal she would ask for duck sauce at Chinese restaurants. I'd never heard anyone ask for that before, but at least the servers knew what it was.