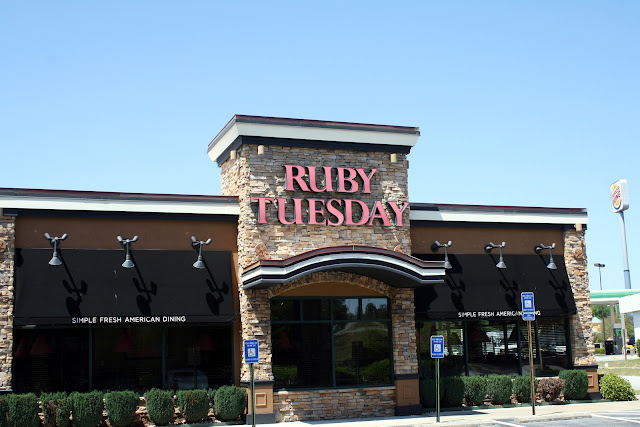 Back in the summer of 2006 I watched a lot of television. I had recently gotten my first HDTV and I could not get enough Angels games in glorious high-definition, to say nothing of the World Cup. Many - it seemed like most - commercial breaks featured an ad for Ruby Tuesday's "Triple Prime Burger." It looked delicious but that meant nothing: the closest Ruby Tuesday was in Vegas.

But later that summer I found myself driving from New York to Pasadena and somewhere in the midwest (I'm pretty sure it was outside of Columbus, Ohio) I was hungry for dinner. I stopped at a Ruby Tueday and ate an appetizer of tempura popcorn shrimp and had that Triple Prime Burger. Both were pretty tasty. Not enough to make me want to go back to Ruby Tuesday (a couple years later they opened a location in West Covina that only lasted two years, and I never tried it), but compared to Chili's, Applebee's or Red Robin, I much preferred Ruby Tuesday.

A few years later - meaning last month - Elizabeth and I were driving north from Florida on I-95. We stopped for gas in the middle of Georgia and we were both hungry. I really wanted another Whataburger but I hadn't seen a sign for one in quite a while. Across the street was a Ruby Tuesday and I suggested we just go there so we could eat and get back on the road without too much of a time commitment.

We were shown to a table in the bar. 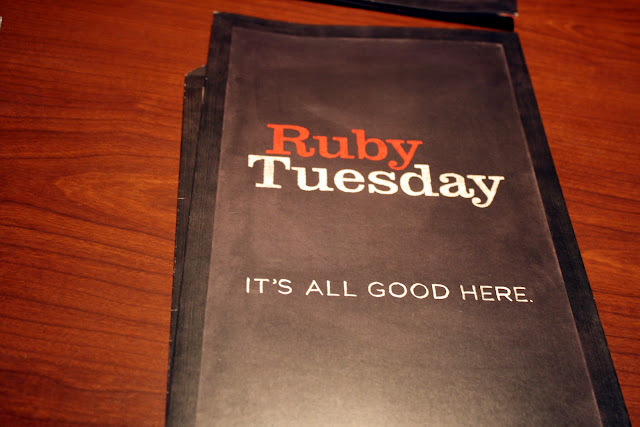 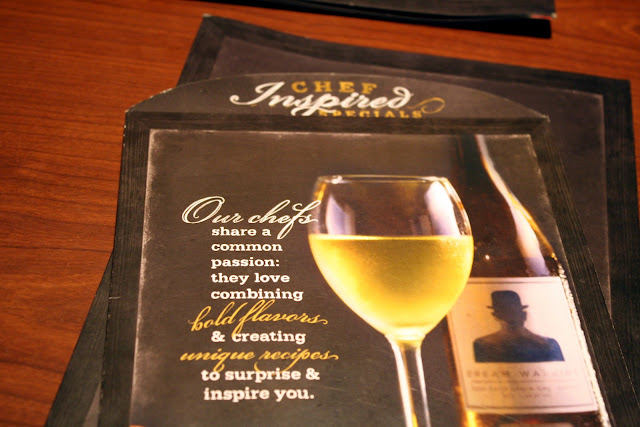 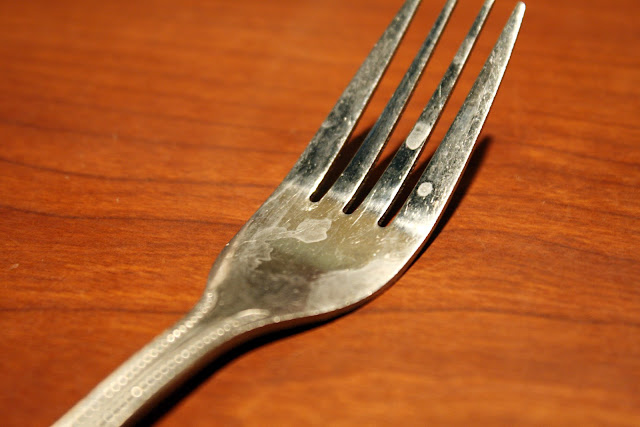 The menus were beat-up and smudged and the silverware wasn't much better. 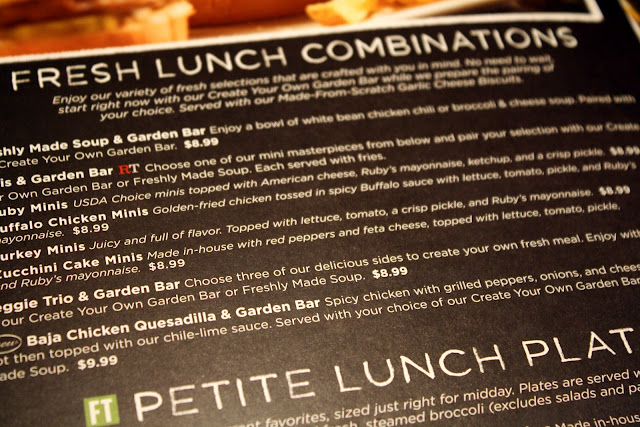 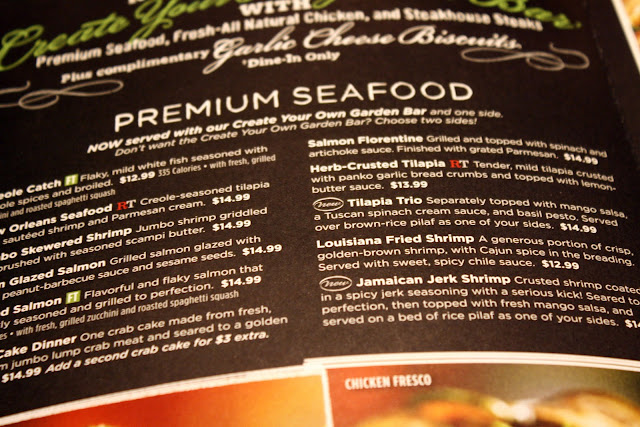 Elizabeth decided on the Buffalo Chicken Minis off the lunch menu. I hadn't had any fried seafood in Florida and I hadn't gotten enough of it in New Orleans, so I decided to order the Louisiana Fried Shrimp. 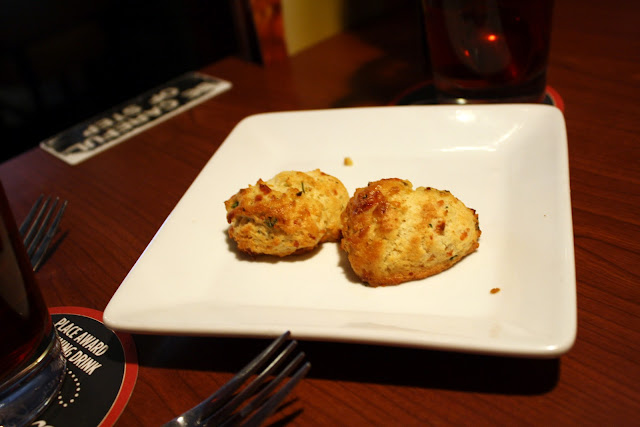 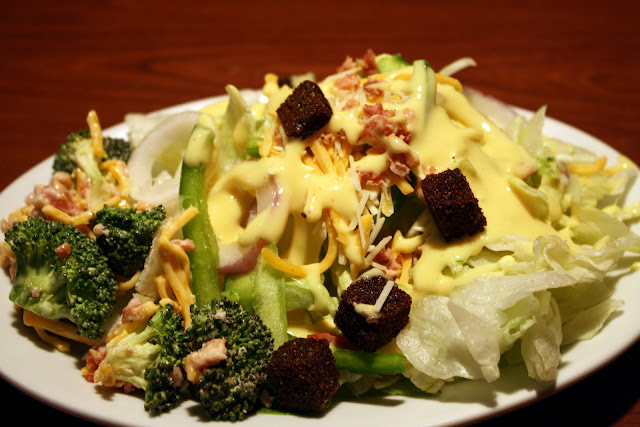 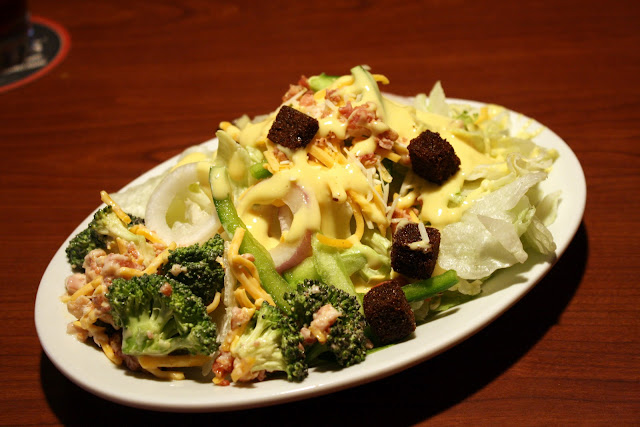 We had the choice of soup or salad to start our meals, and I went to the salad bar: iceberg lettuce, cheese, broccoli, bacon [sic] bits, red onion, bell pepper, and croutons with honey mustard dressing. It was a completely average salad bar salad, but I still ate most of it. 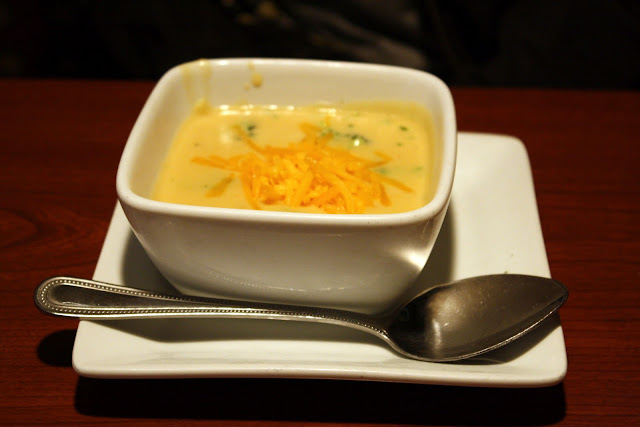 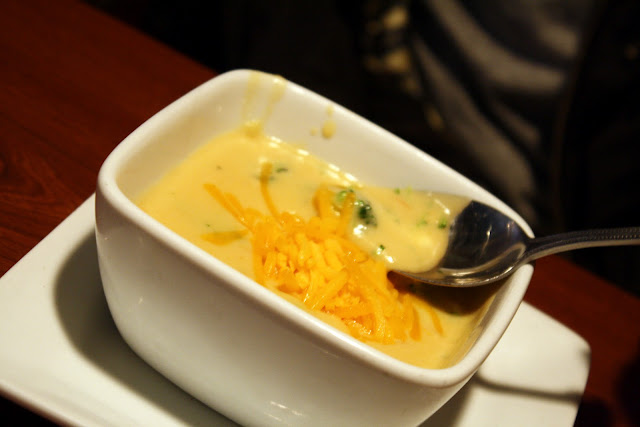 Elizabeth started with the broccoli cheese soup and I took a bite. It was better than my salad, that's all I'll say. 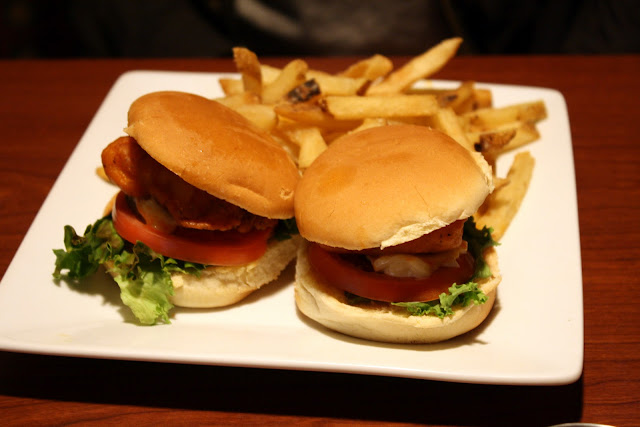 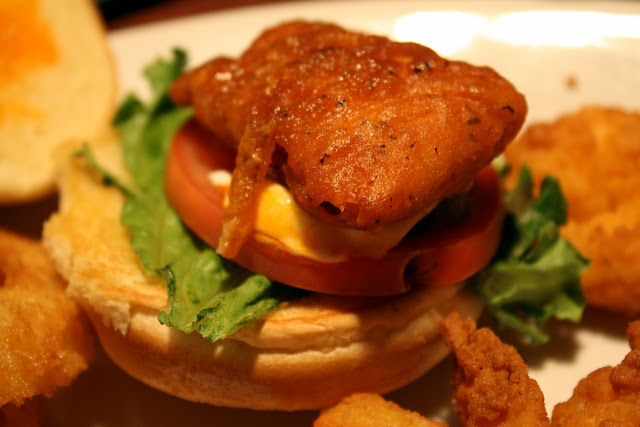 Elizabeth liked the miniature chicken sandwiches. Of course she gave me a bite, and I thought they were okay. I mean, the buns weren't very good and they should have had more buffalo sauce on them, but they were by no means bad, and the portion size was just right for Elizabeth.

"It's a pretty good deal for $8.99 when you consider it came with two sides," she pointed out. 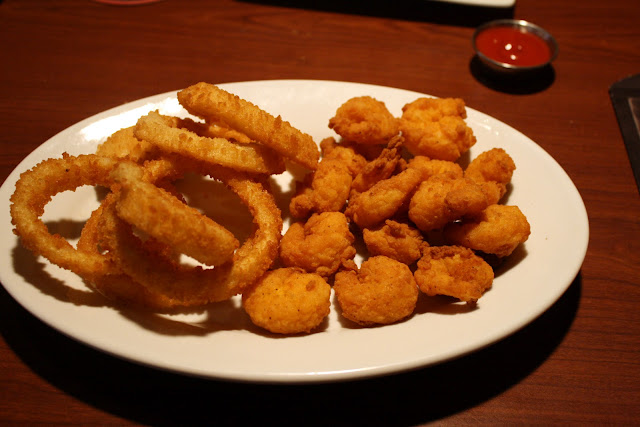 My plate, on the other hand, did not feel like a good deal. You can see the pictures yourself and decide if this looks like it was worth thirteen bucks. The onion rings and shrimp were covered in the same crumbs and fried to the same light-brown color. They tasted pretty much the same, too. Not bad. Not good. Just like previously-frozen stuff dumped out of a bag into a fryer. Which I'm sure it was.

So I've now been to Ruby Tuesday twice. Once was good. Once was not. I don't know if they just have a higher quality of Ruby Tuesdays in Ohio than they do in Georgia, or if ordering burgers is always the way to go. To be honest, I don't really care. I won't be coming back to a Ruby Tuesday.
Posted by JustinM at 10:00 AM

What a rip off! I agree, not worth going except for the occasional burger.

I worked at ruby's in high school, back then the salad bar was the best, I have not been to one in years but it seems like they don't put as much on the salad bar as they used too.

Wow. the presentation on the Shrimp dish is seroiusly lacking. I mean, put it in a basket with some colored paper or something - anything! It looks so depressingly spare.

You said it bro. The frozen Kroger-brand shrimp I pan fry on my stove look and taste ten times better than this 13 dollar plate.