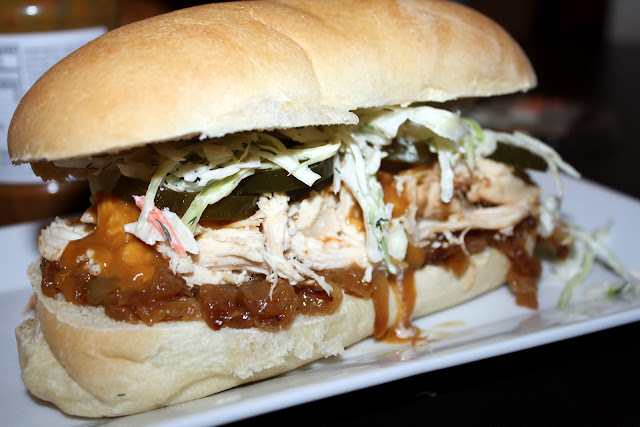 There was a comment two days ago expressing happiness that I had posted my first recipe in two months, and a friend of mine wrote to me in an email that I should post some more sandwich recipes. So here you go. Pretty much every store at which I've shopped in Brooklyn has great bread, but there's a particular one to which I go that has these 7" rolls that make nice sandwiches: a crispy, thin crust and very soft interior. On this occasion I decided to make chicken sandwiches. 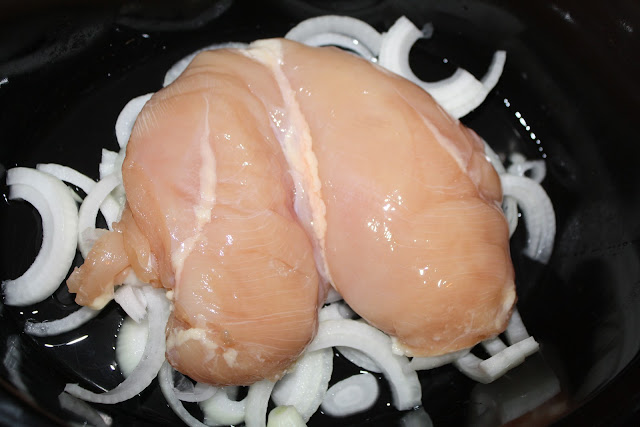 Get yourself a chicken breast (or two) that you like. I got these at a local butcher shop with which I have fallen in love. (I'll tell you more about it one of these days.) I sliced an onion and put the pieces in the bottom of the slow cooker before placing the chicken on top. I dumped in a half-cup of water. 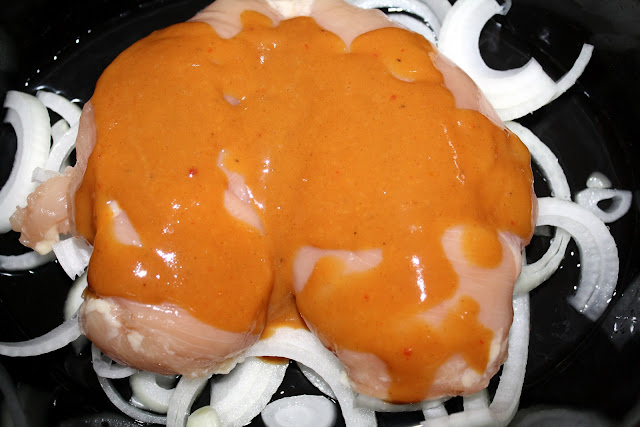 On our way out to New York I bought a bottle of Sticky Fingers mustard barbecue sauce. I ate at one of their restaurants a decade ago, but to be honest I don't remember anything about the food. (I was at a shopping center in Tennessee with a huge line outside of Outback Steakhouse and no wait at Sticky Fingers, so I chose the latter.) But I have purchased their mustard sauce two or three times since then and I enjoy it. I poured some on top of the chicken. 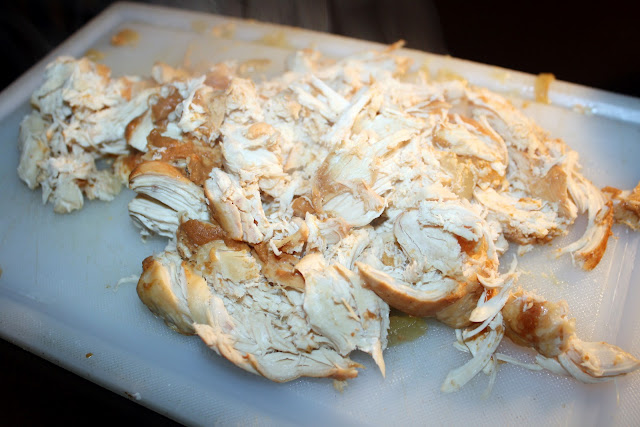 With the slow cooker on low you can let it run as long as you want. With only two pieces I aim for at least six hours, though once I got caught up doing a bunch of things and didn't get home until the cooker had been running for eleven hours; no harm was done.

When you take the chicken out of the cooker you can chop it, but it usually isn't necessary - the chicken should fall apart with the slightest of nudges. 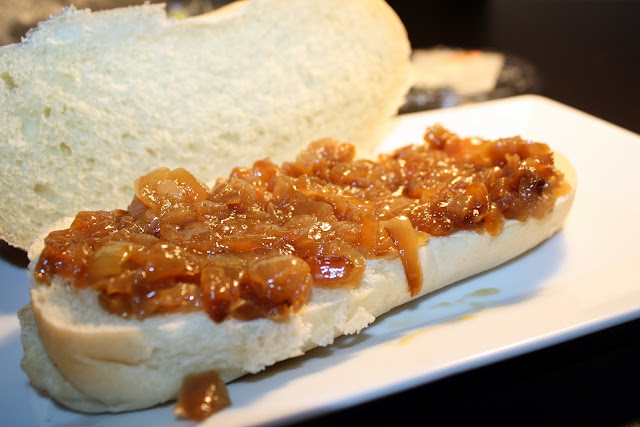 On this occasion, since I had nothing but free time, I diced up some Vidalia onions and caramelized them for more than an hour. Vidalia onions are already sweet; when you caramelize them they turn into a candy-like mush that livens up any sandwich. 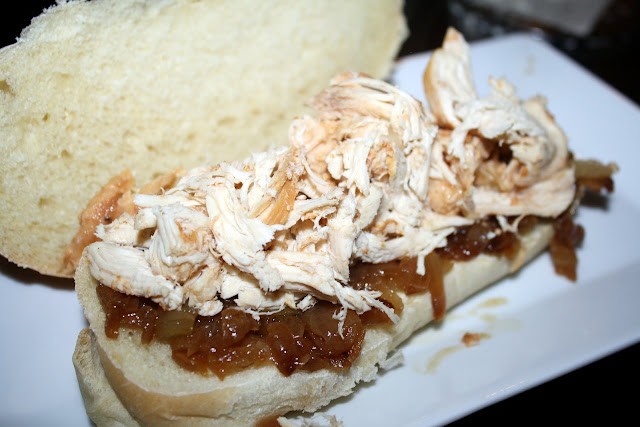 I placed two handfuls of the shredded chicken on top of the onions. 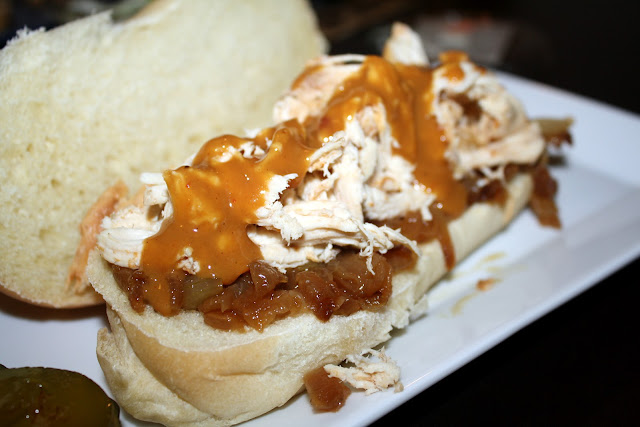 And a dousing of the mustard sauce. 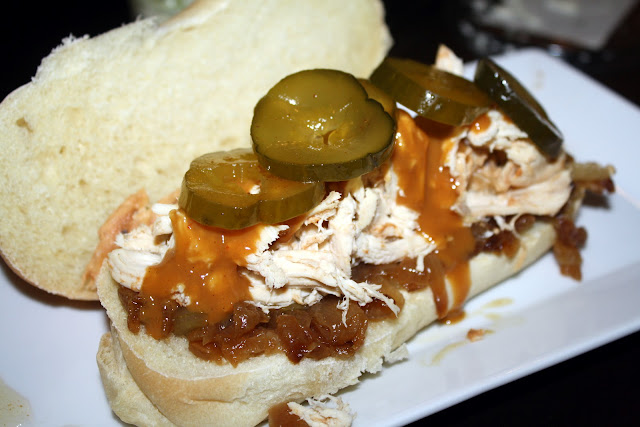 I'm being stingy the last couple of weeks with my spicy-sweet pickles that I purchased in San Antonio, because they're almost all gone, but I felt they were needed on this sandwich. 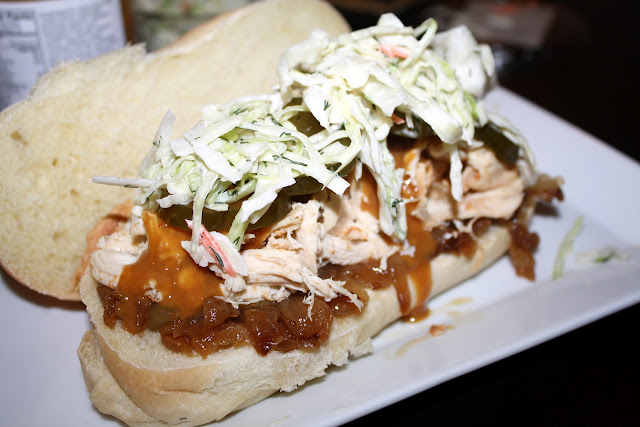 A local grocery store has their own version of slaw in the deli section: white cabbage with a tiny amount of carrots, some dill, and an oil & vinegar dressing. It's more similar to a Lebanese or Mediterranean cabbage salad than any traditional picnic cole slaw. 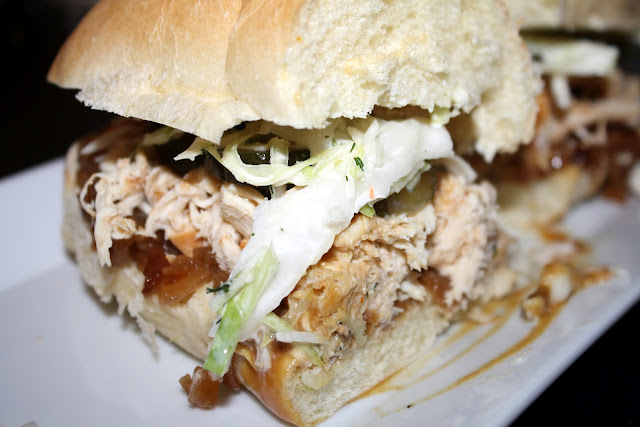 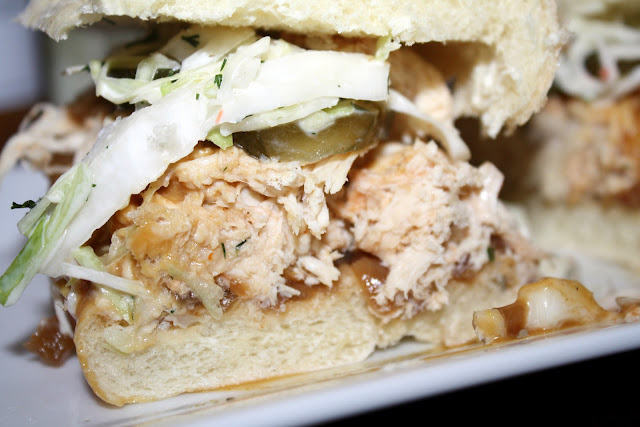 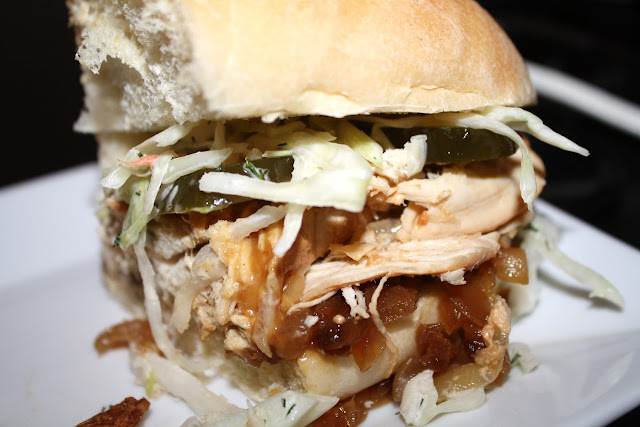 I much preferred this to the shrimp po' boys. Everything worked so well together. It had that wonderful level of flavors that you sometimes achieve with a sandwich: the sweetness of the onions and chicken, topped with the tang of the mustard sauce and pickles, and cooled down by the light cabbage salad. It did not taste like barbecue by any means but it still was reminiscent of 'cue, and not just because of the sauce. Maybe it was the fact that I put a fair amount of effort into creating these.

I will be making these again, and I have a couple new ideas for ingredients I want to try adding as well.

Nice to see some home cooking! Great recipe! Now I can only hope that there's a Trader Joe's near you :)

There is, 7 blocks away, but it's not my favorite. It's big - housed in an old, big bank - and always crowded. (They have 30 checkout stands.) They have a few items I haven't seen before but their salads and produce aren't nearly as fresh as they were in CA. The prices are still good, though.

These sandwiches were tasty. I do love the rolls!

Lunchtime. I wish I knew a place around here where I could get a sandwich like this. Looks amazing.

I can't believe how hard it is to find Carolina style BBQ sauce in Pasadena.

I ended up with Kinders and Culinary Circle's version.

True that. I sometimes made my own vinegar sauce to take to places like Perdue's or Barn Burner. I've never tried the Culinary Circle stuff - the only thing I tried of their was the Jamaica jerk marinade and I hated it.

My local TJ's has 4 lanes. I can't imagine 30 (scary). I was just hoping for the West Coast/East Coast comparison of products!

I have quite a few products I ate on the West Coast that I never wrote about, and some I had not seen until I moved to Brooklyn. (They may have them out west, I just never saw them.) I'll try to get it done this week but I might not complete it until next week.