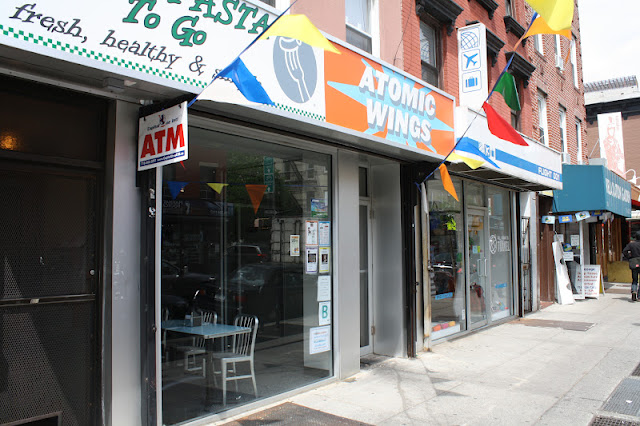 After searching for a butcher shop nearby my new home, the second thing I searched for was boneless wings. I liked the name Atomic Wings and they have several locations scattered throughout the area. The reviews of their location in Cobble Hill were lower than other locations, but that is the one closest to me so I decided to give it a try. 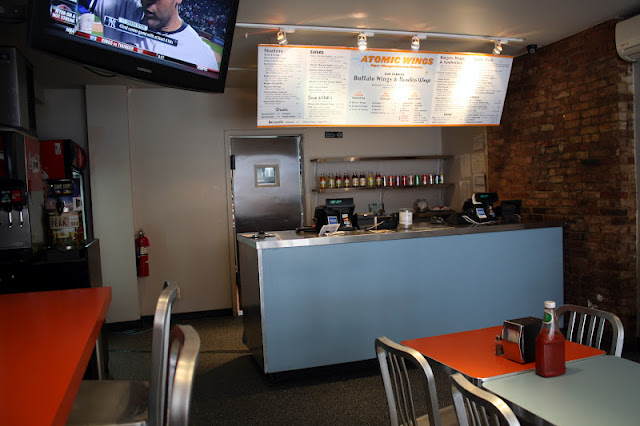 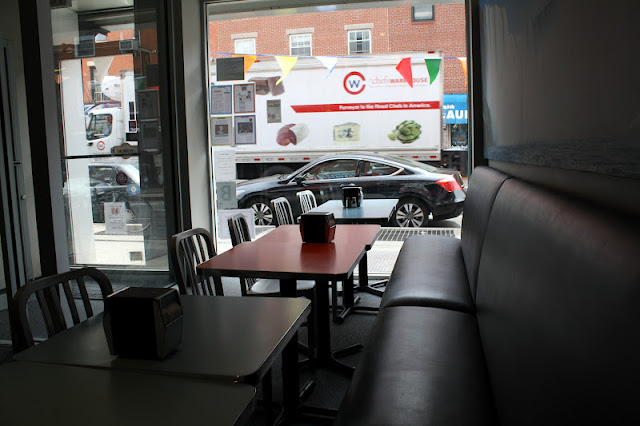 It was empty inside. A little strange considering every other restaurant I passed on Smith Street had lots of customers, but I didn't think much of it. 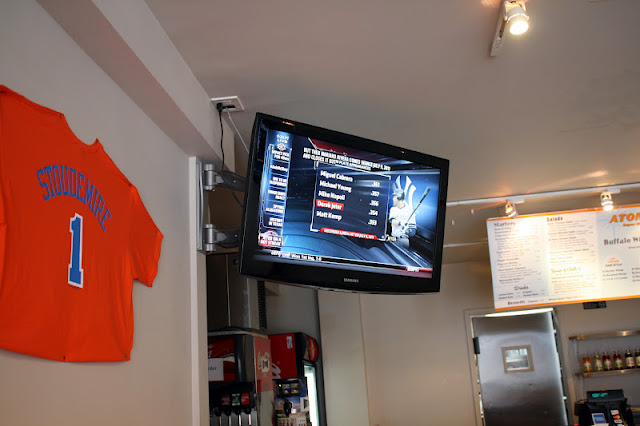 Because it was cool inside and SportsCenter was playing. 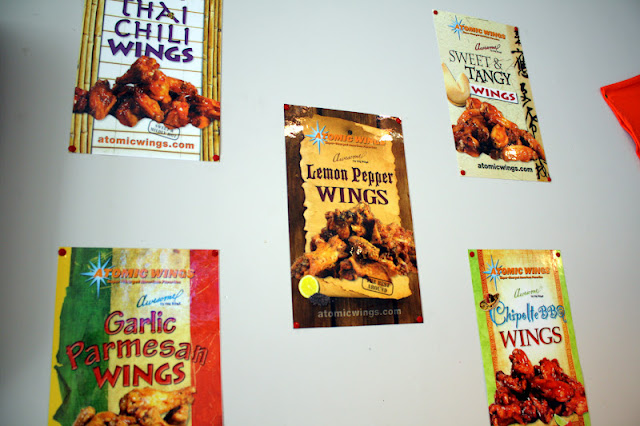 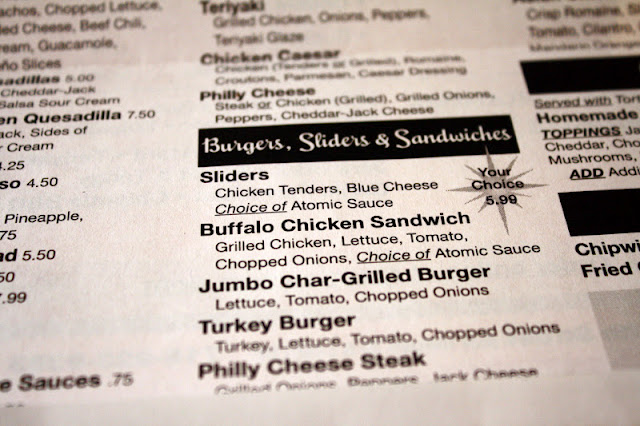 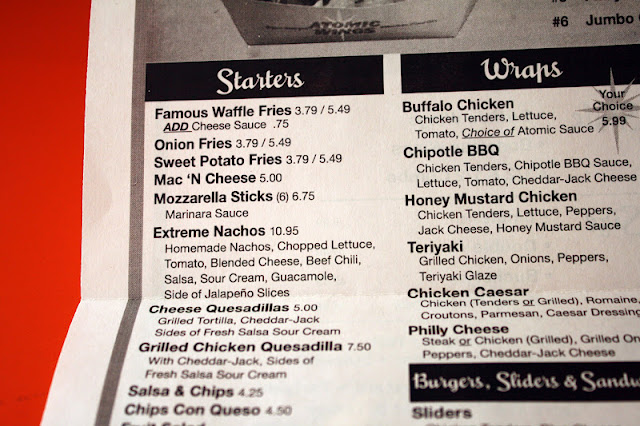 Posters of the wing flavors are plastered on the wall and a menu above the counter lists the flavors as well.

"I'd like the boneless wings with chipotle-bbq, please," I said.

"We don't have that flavor," the girl told me.

"Okay," I said, and studied the menu further. "Then I'll have Thai-Chili."

"We don't have that either."

"What flavors do you have?" I asked.

She rolled her eyes and pointed at the menu board. "They're all listed right here."

"I just tried to order two of them and you told me you were out."

"Well, we have all the rest," she huffed.

So I ordered the Sweet & Tangy and a drink and sat down and watched TV for ten minutes. 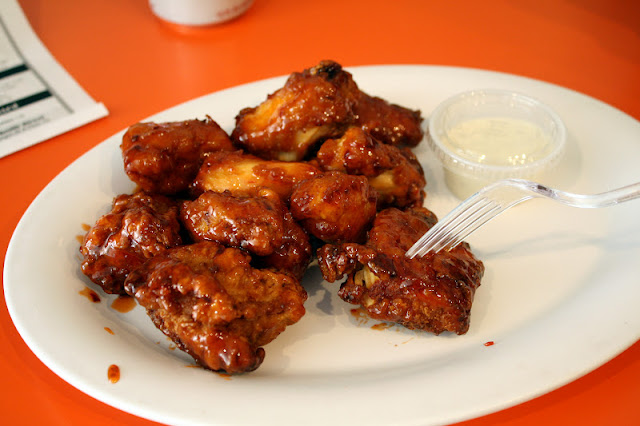 When ordering, I had thought that the nine-dollar price tag for the wings was pretty steep, even by Brooklyn standards, but when I received the wings I understood: these things were big. Two people with a regular appetite could possibly split one order of these. 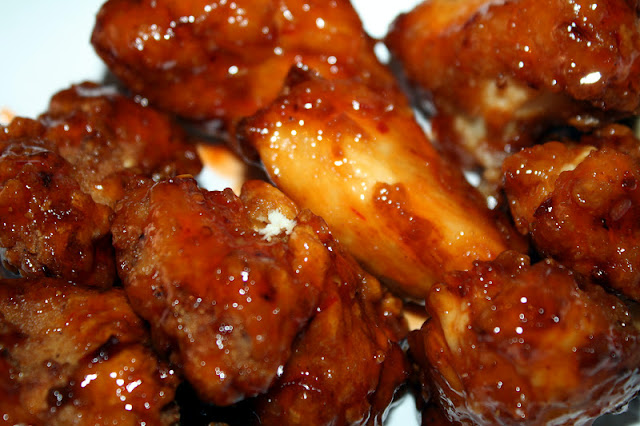 But, unfortunately, they weren't good. The batter was applied as sloppily as any I have ever seen: at least half the pieces weren't fully coated and were mostly bare chicken. If the place had been busy this would have been understandable. But I was the only person there. 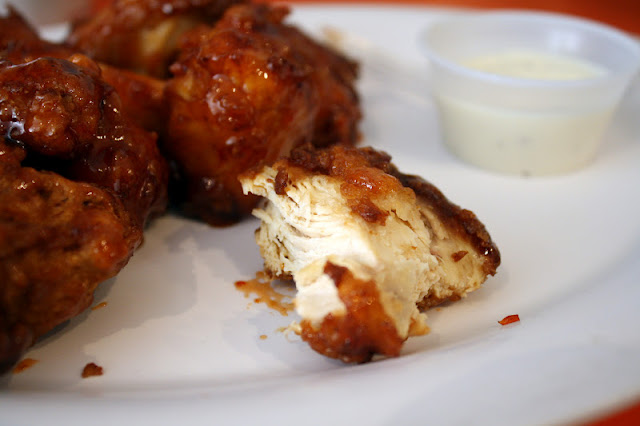 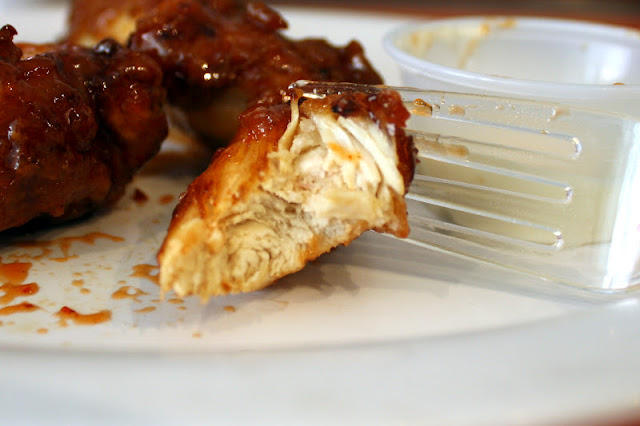 I still would have forgiven the lack of batter if the flavors were good. But they weren't. The chicken was overcooked. Again, I was the only person there. Did they somehow forget about my order and leave it in the fryer too long? It tasted close to jerky.

And the sauce was the sugary, gloopy stuff I can't stand. It was all sweet, not spicy.

I was only halfway done with the chicken - although half is all I could eat - when it occurred to me that there was a reason Atomic Wings was a ghost town while the other restaurants nearby were crowded. If the opportunity arises I would be willing to try one of the other Atomic Wings in New York - my attraction to boneless wings is that strong - but there is no way I'd ever return here.
Posted by JustinM at 9:30 AM

Too bad about the missing sauces, but looks like the wings were delicious and plentiful.

how dissapointing! Croxley's, in the east village, has cheaper and way better wings! And better service, too!

I hate to be crude, but the last time I visited this blog, you were stationed near LA and Pasadena and such. Can I confirm your move to NYC and ask why you did so?