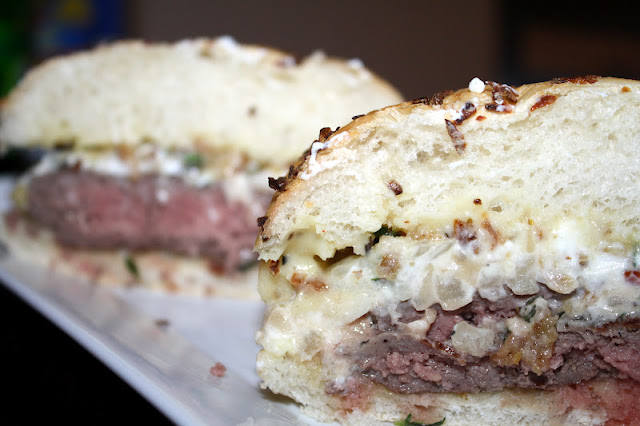 I'm not a big fan of Bob's Burgers but, being that it's often wedged between The Simpsons and Family Guy, I sometimes watch it. A few weeks ago I heard Bob mention the "Onion-tended Consequences Burger" and I thought Hmm, that sounds good. Not good enough to make one immediately - like, say, the Liz Lemon - but I made a note to try it one day.

Last night, Elizabeth and her sister were taking their mom to see Newsies, a belated Mother's Day present. So I was contemplating what to do. The Angels were playing the Dodgers for the first time this season, which means I would be staying home and watching the game. (As I've written every year of this blog on such an occasion, the opportunity to hear Vin Scully call an Angels game is not one I would ever pass up.)

I decided to make the Onion-tended Consequences Burger. I don't make fictional foods nearly enough. (I could see this becoming one of those things with which I get carried away, so I decided to do it when I was dining solo.) On the show, Bob only mentions three ingredients: caramelized onion ("First you have to caramelize the onions, and no, I don't mean add caramel"), thyme, and goat cheese. He certainly gives the impression that those are the only three ingredients, but never says so specifically. So I figured I had some leeway. This is what I mean about getting carried away. Whatever. Here's what I did: 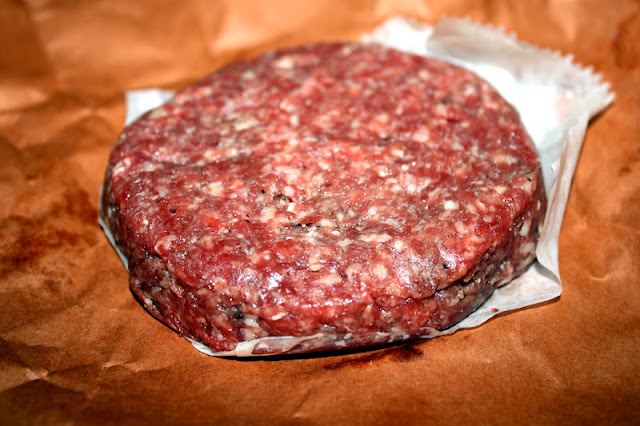 I got a half-pound brisket/short rib burger patty from Paisanos. This should come as no surprise to anyone who has been reading for more than a week. 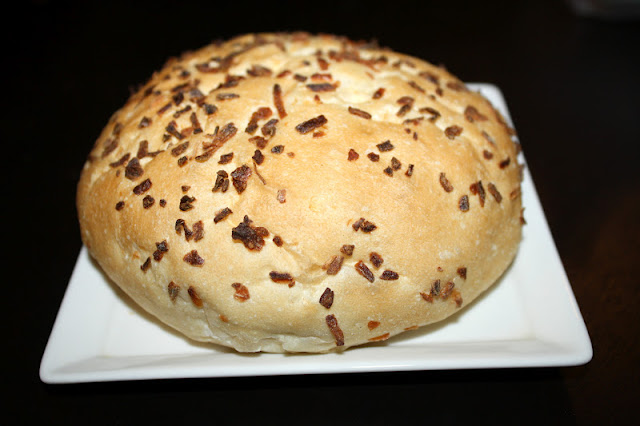 I wanted an onion roll, of course, and I went to a couple of places, with no luck. So I wandered down to a bakery about a mile away. I'd only been there once - I bought a giant black & white cookie for Elizabeth on her birthday last month - but it was a nice day and I felt like a walk. Sure enough, they had onion rolls.

"Do you want the large or the small?" the woman behind the counter asked me.

This blew me away. I don't remember the last time anything cost only 45 cents. 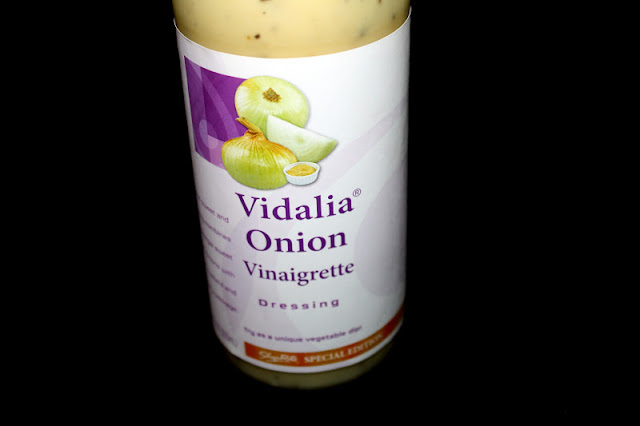 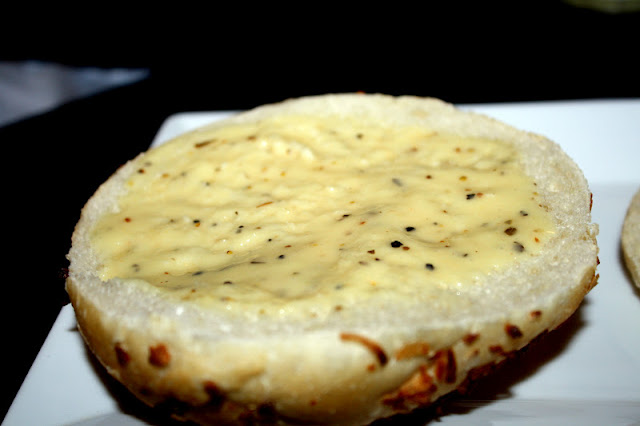 I figured I could use a liquid condiment of some kind, so I got a Vidalia onion vinaigrette. 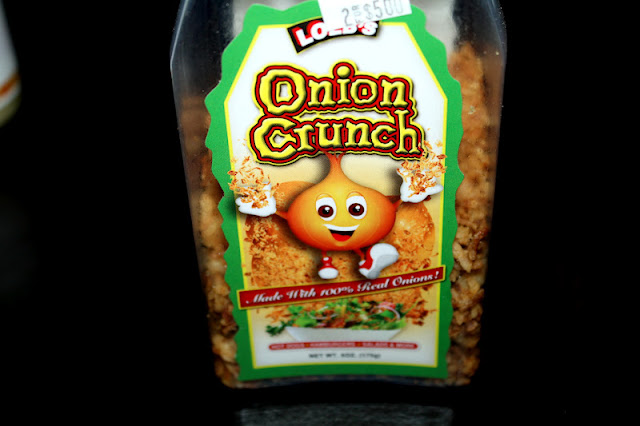 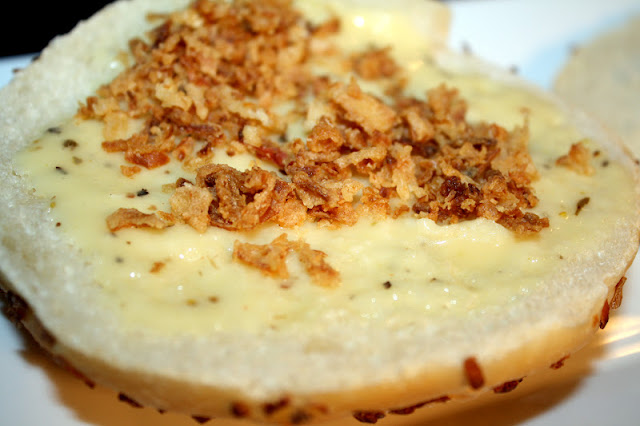 And for some added onion crunch I added... well, Onion Crunch.

(It turned out both of these things were completely unnecessary. They were not bad by any means, but the recipe described on Bob's Burgers was fine the way it was.) 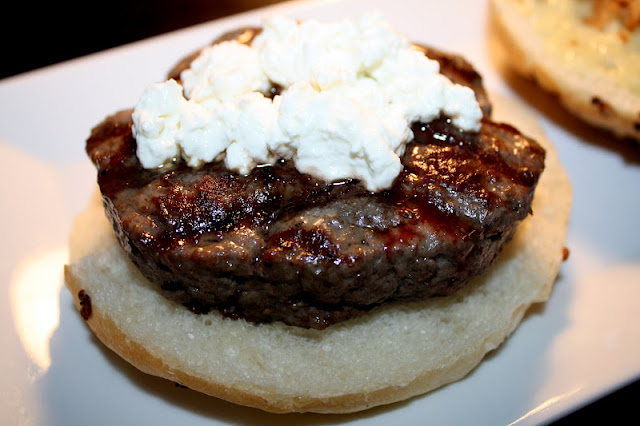 Once the meat came off the grill, I added goat cheese to the top and wrapped it in foil for five minutes before placing it on the bun. 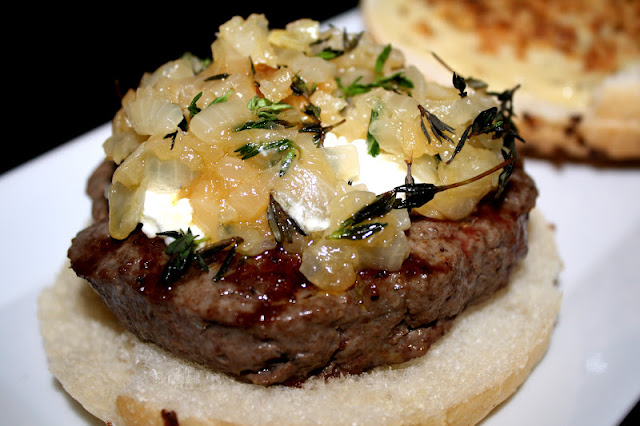 Then I added caramelized Vidalia onions and thyme. 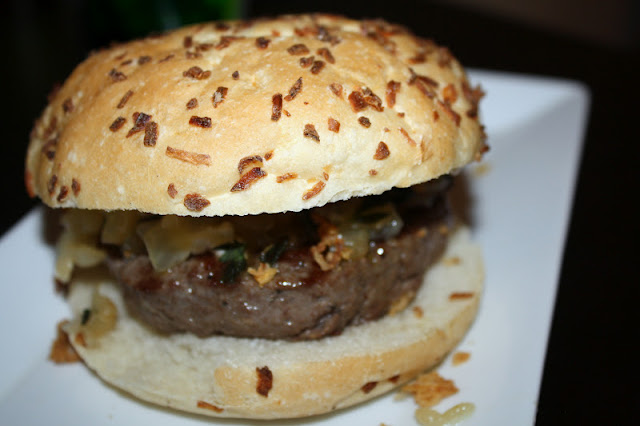 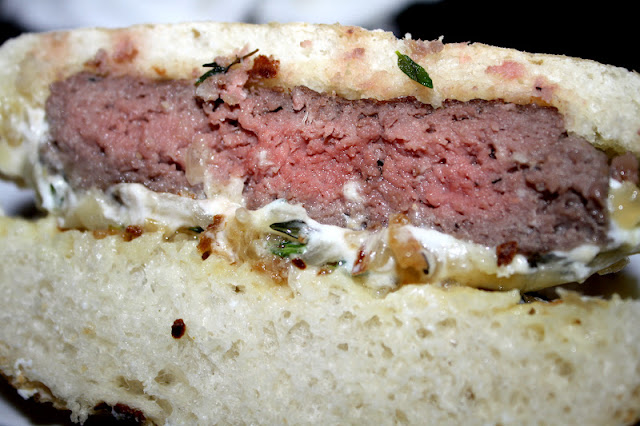 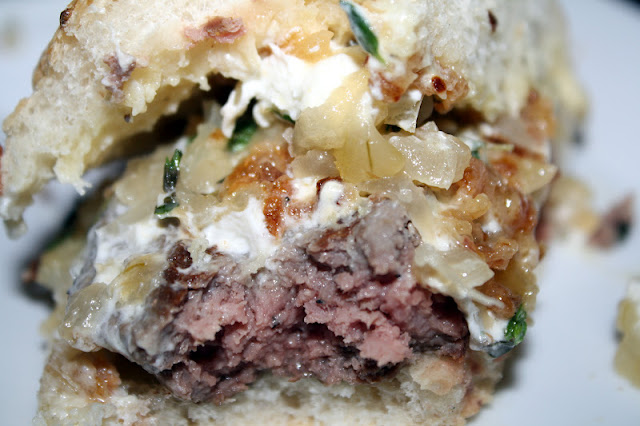 I will be glad to tell you if these burgers were good.

But is that really necessary?
Posted by JustinM at 10:00 AM

Of all the things I've cooked in the last two months, this is the one for which I most wished I'd been with the whole gang.

I've never seen Onion Crunch before -- I could definately see that useful for quick weeknight meals. Is that a local thing?

Rarely does a food pic make me say "oh my God" aloud. So kudos to this burger. OMG.

Mike: I don't know. I think it's the same as any fried onion bits.

Bekah: Thanks. I was pretty pleased and proud myself.