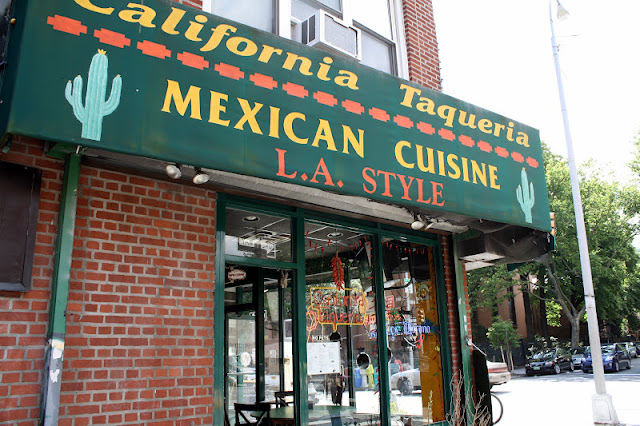 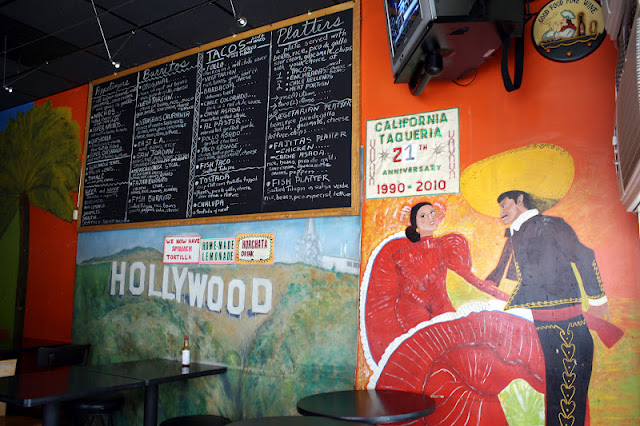 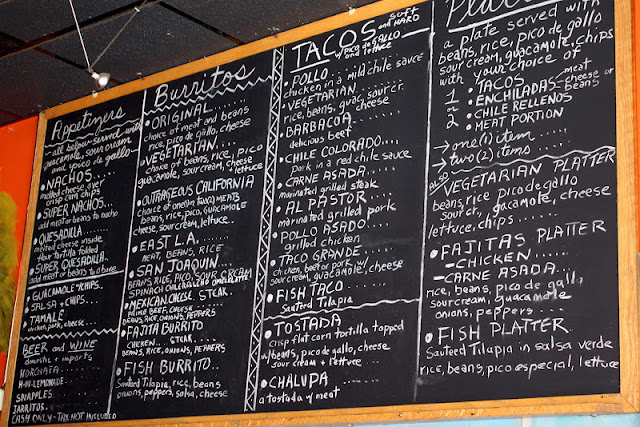 If I was expecting L.A. tacos, I should have stayed in L.A.

Still, when a restaurant calls itself Original California Taqueria - and its banner reads "L.A. Style" - there is an elephant in the room. It wouldn't feel right to write about a place with that name and not mention that it's not like any taqueria I've ever visited in Los Angeles. So let's just get these four things out of the way upfront and then we can discuss the restaurant for what it is, not what it is not:

1) The tacos were more than three dollars each.
2) My tacos took more than five minutes to assemble.
3) I was asked if I wanted lettuce and tomato.
4) Despite the fact Mexico was playing Brazil in a friendly, the TV was turned to baseball. (This one blew me away more than the other three combined.)

Now that I've mentioned those things, I'll tell you the situation: I had noticed Original California Taqueria for weeks - I walk by it almost daily - but nothing about the place called out to me. (There are taco places I want to try in Brooklyn, but they are inconvenient, for more than one reason.)

But the other day it was hot and I was quite hungry, and tacos sounded good. So I entered OCT, stood in front of the fan for two minutes while I studied the menu, placed an order for two tacos and, noticing a cooler sweating next to the register, a Pacifico.

As I mentioned, it took at least five minutes for my tacos to be assembled. I'm not entirely sure what was happening - the chicken was simmering in sauce; I'm not sure where the al pastor was. (I did not hear the ding of microwaves - maybe it was being kept in a warmer somewhere?) 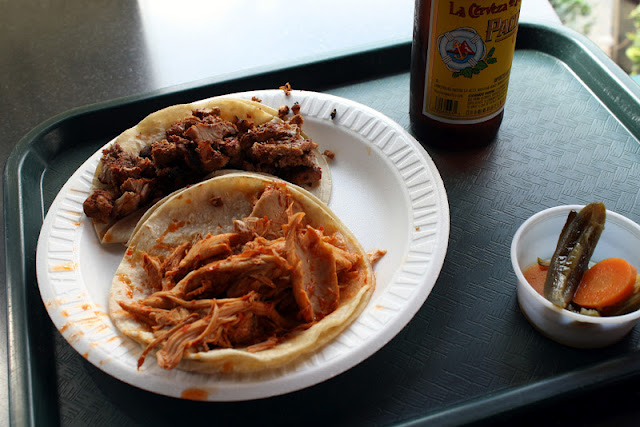 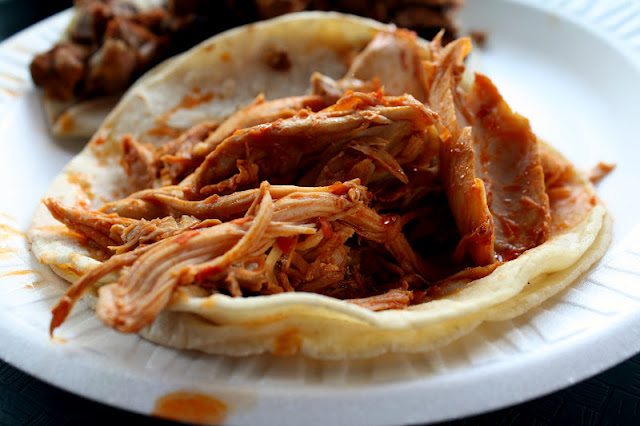 I wasn't a big fan of the chicken. The flavor of the "mild red chile sauce" was pleasant (when they say mild, they aren't kidding - this thing had no heat whatsoever) but the chicken was stringy and overcooked. It probably would have been better if they'd diced it up. 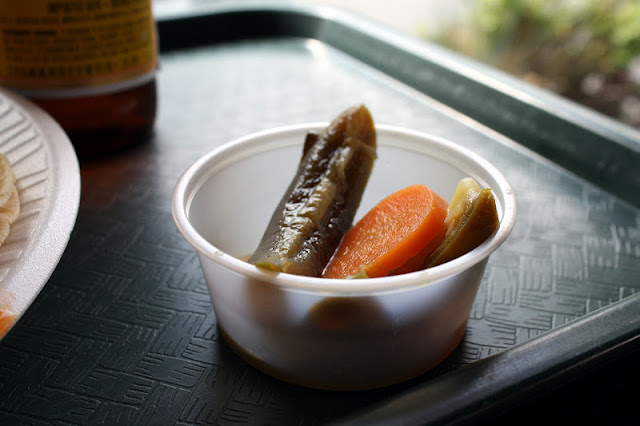 I'd taken some pickled veggies from the container on the counter and after a bite of the chicken taco I did not hesitate to add them. 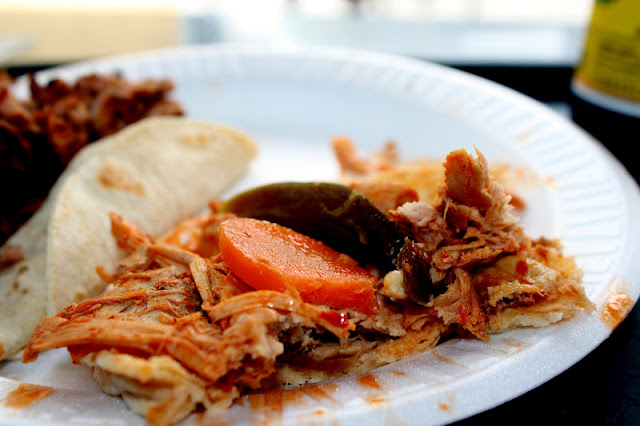 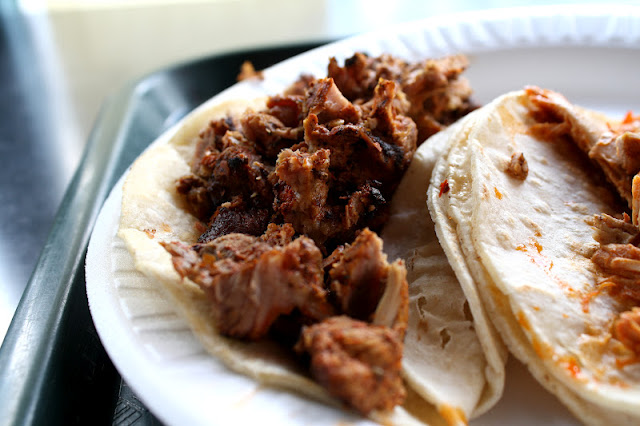 The al pastor was interesting. The menu describes it as being grilled; I did not see the traditional vertical spit (not that this means there wasn't one), perhaps it was grilled on a flat-top. At first bite I was surprised at how dry it was, unlike any al pastor I've ever had. But with each successive bite I noticed the pork flavor more and more. If you like pork, you'll probably like this taco. If you don't enjoy pork but tolerate al pastor tacos because of the sum of their flavors (I have a fried who hates pork but likes al pastor) then you should probably stay away from these particular tacos. 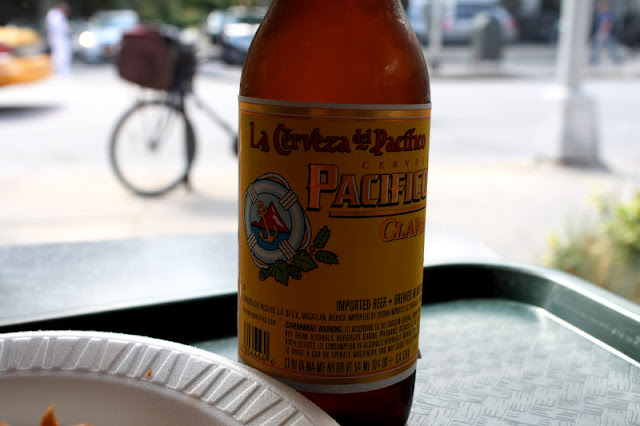 My first Pacifico in months hit the spot beautifully.

I certainly won't be taking any out-of-town guests to Original California Taqueria. (They might be doing more harm than good with the "L.A. Style" lettering.) But for what it is, I don't have any problem with the place and I can see myself going back on a warm day for a plate of nachos and a cold beer. And any place in this part of Brooklyn where you can get lunch and a beer and still get change from a ten is okay with me.
Posted by JustinM at 9:00 AM

My heart leapt in anticipation when I saw the headline, hoping that you had found some decent Mexican food out there. Then I saw the pics. Sorry, amico.

There are a couple of trucks I have seen pictures of that look awesome, but they're not convenient (and they don't open until evening). At some point my longing will be great enough that I will make the trek, but not yet.

It was dryer than any al pastor taco I have ever had, true, but it was good. Think of it more as a "grilled pork taco" than traditional al pastor.

At least you can’t mess up a Pacifico in a bucket of ice. The San Joaquin burrito looks good, but I like the name East L.A. Burrito better.

How 'bout the salsa? Didn't notice any on your plate - - -
Also, they advertise that they now have spinach tortillas. Maybe that's the California angle.

I'm honestly surprised that I've never seen you blog about more traditional taco fillings - tongue, head, tripe, etc. Is it just a preference thing? Any time (most) people around here go to a taco stand, it is usually lengua tacos all around. It's considered sacrilege to go to an authentic taco spot and get beef/pork/chicken. Any thoughts? I should note I don't live in either NY or CA.

Nosh: You are correct, no salsa for me. It didn't look that good.

Anon: Yep, it's a preference thing, but I'm not sure what you mean by "traditional". I have many friends who are Mexican, Guatemalan, and Salvadoran, with whom I have eaten tacos over the last decade, and not once has the word "sacrilege" been used. In fact, not once has anyone ever made any comments on the taco preferences of others.

HA.HA.HA. Very cute though. I am excited to go back to So Cal for some tacos... which wasn't happening in the PNW. Cali is def good for some things...