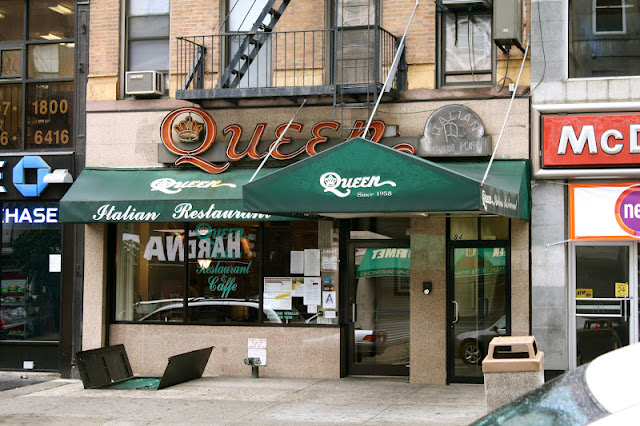 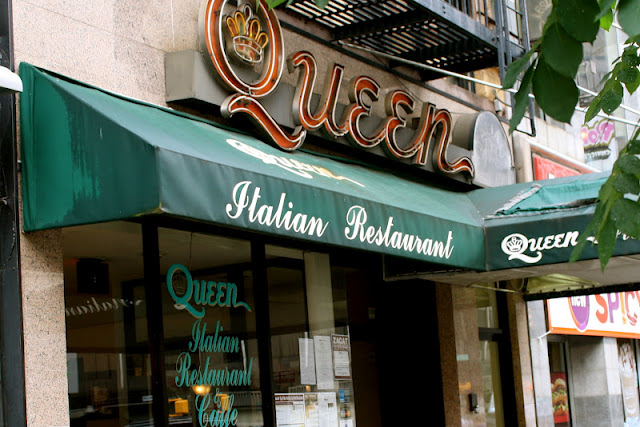 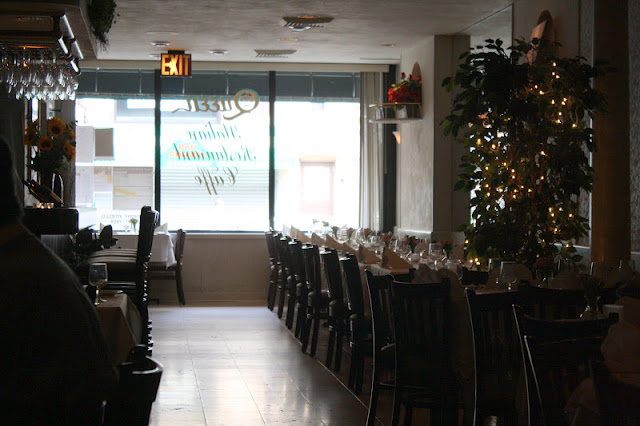 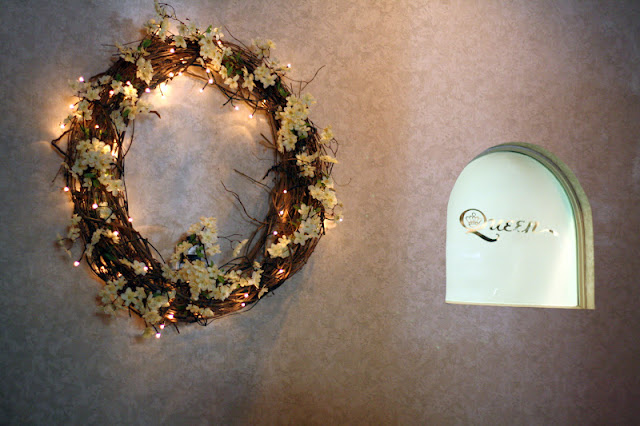 Two years ago, I wrote about Elizabeth's and my trip to New York for her sister's wedding. The first night we spent in Brooklyn with her Uncle George (actually her great-uncle), only four blocks from where we now live. Uncle George was the kind of guy you see in movies: every day he walked around the neighborhood multiple times and was stopped on every block - often more than once - by people saying hi to him, asking him questions about common friends, throwing out comments about the Mets. (I'm not sure how long he lived in the neighborhood but Elizabeth's dad remembers coming to visit his uncle almost 60 years ago, so it was a long time.)

That July day two years ago was brutally hot. Records were set in some parts of the city, but George, just a few days shy of his 82nd birthday, wanted to do everything with us that day. We walked around the Botanical Gardens for at least an hour in the afternoon heat; I asked him several times how he was doing. "Fine" was the answer each time, and I could sense a growing annoyance that I actually thought he might be having a hard time keeping up with two people a half-century younger than he.

Uncle George passed away last week. It was no surprise, he had been ill for all of 2012 and his sickness confined him to a wheelchair; one got the feeling the inability to walk around his beloved neighborhood was a fate worse than death.

Several times over the last months of his life, George had reminded Elizabeth's dad, Rick, of a last order: when he passed, he wanted all of his good friends to visit Queen Italian Restaurant for lunch, on him. Yesterday, 15 of us gathered there for a late lunch.

To be honest, Queen is not a restaurant I would have ever visited myself. Wedged between a McDonald's and a bank, I'd noticed it almost every day but never peered inside, never even looked at the menu in the window. 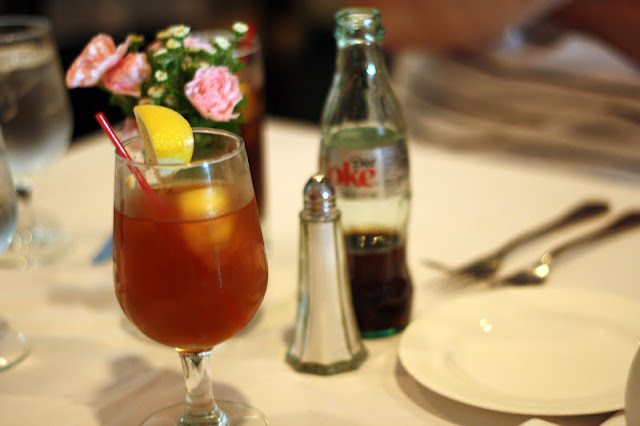 I only wanted an iced tea, but several people had sodas, served in old-fashioned bottles. 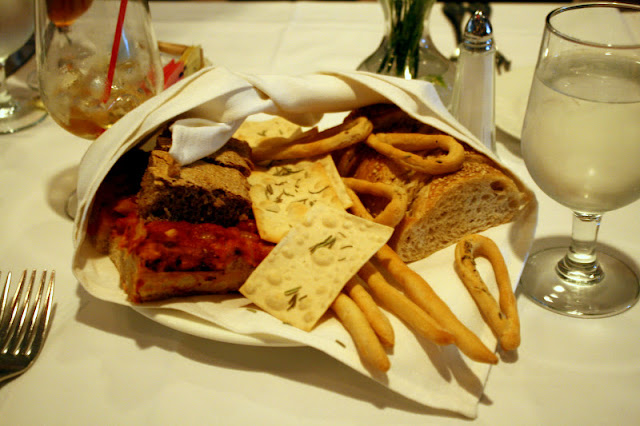 There was a selection of breads from which to choose. 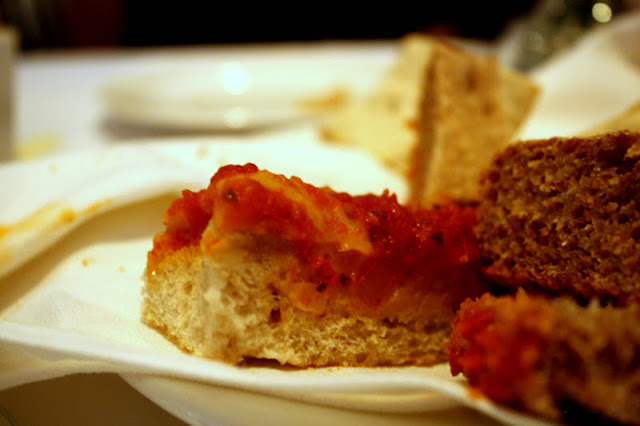 Including a bread already slicked with marinara. I don't remember seeing complimentary bread served that way before. 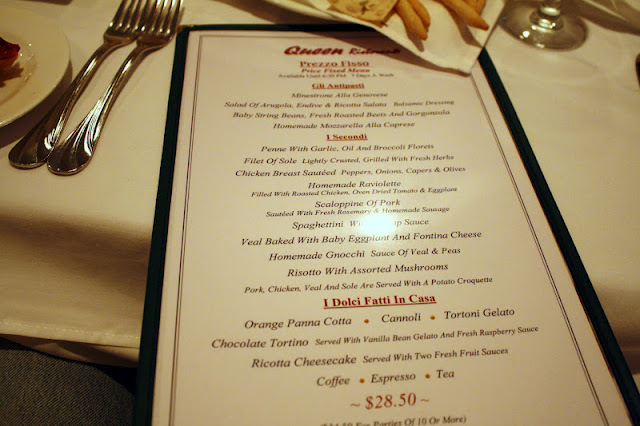 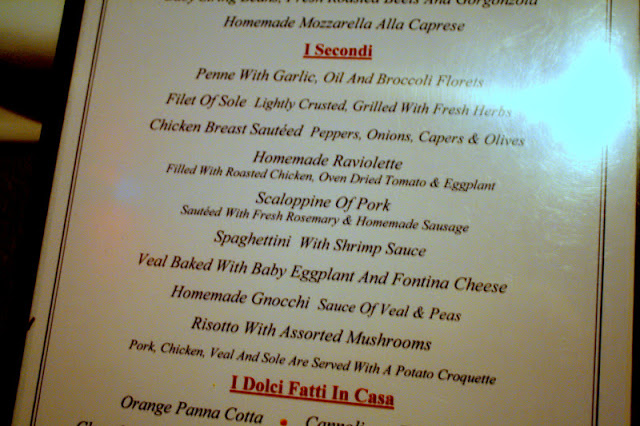 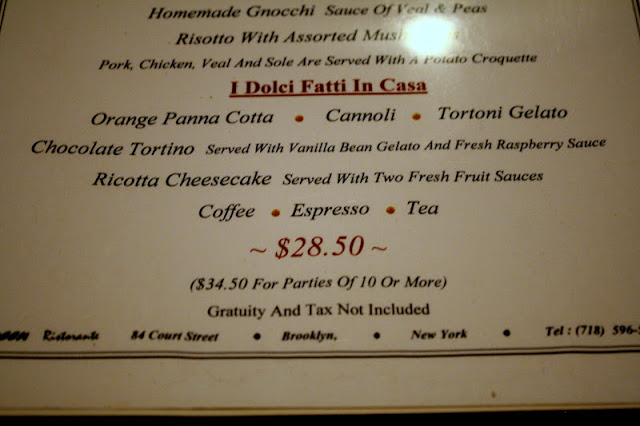 The"prezzo fisso" menus were offered to everyone: antipasti, entree and dessert for $34.50. If there had been less than ten of us, it would have been six dollars less per person, something else I'd never seen before. 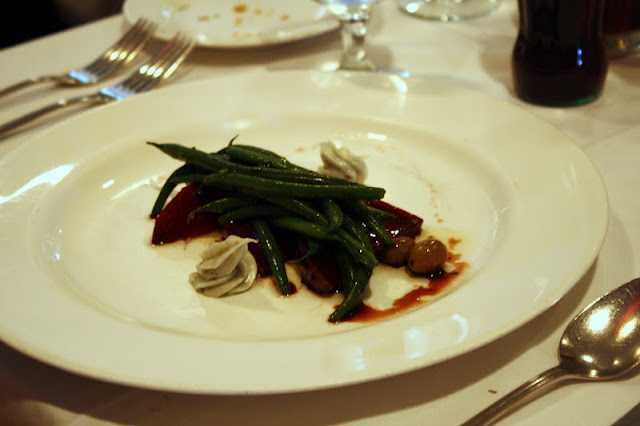 Elizabeth's mom, Kathy, started off with the string beans and roasted beets. She likes beets more than anyone I have ever met, and said these were absolutely fantastic. 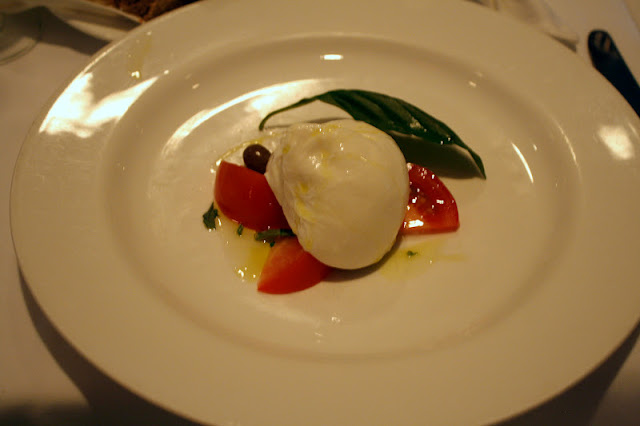 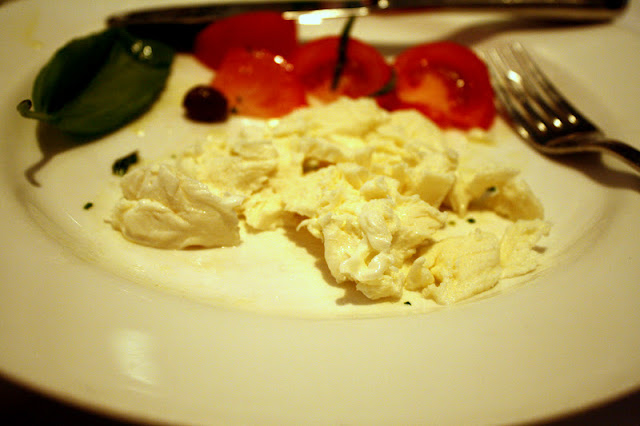 I - and from what I could tell, almost everyone else - started off with the Mozzarella alla Caprese, and I'm glad I did. It was some of the best mozzarella I've ever had. I could have just eaten two of these for lunch and been happy.

"Did you enjoy the mozzarella?" the waiter asked me as he cleared my plate.

"It was outstanding," I said. 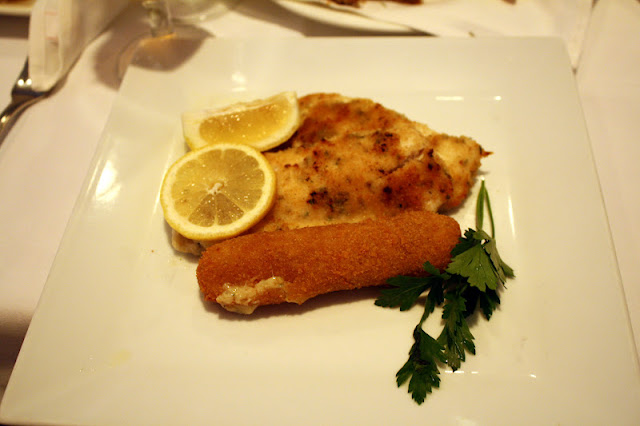 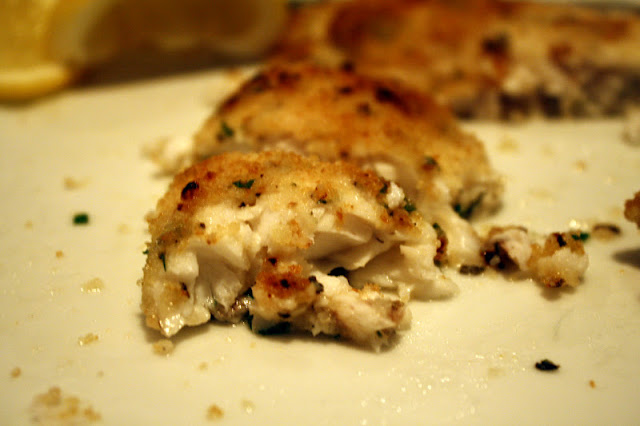 I'd considered getting the chicken breast with sauteed vegetables, but at the last second I decided to get the filet of sole. (I can easily roast a chicken breast at home, I reasoned, but I always seem to screw up lightly-fried fish, so I might as well get it when I can.) It was great, crusted with herbs and doused with a little lemon. I shared some with both Elizabeth and her dad, and they both agreed it was wonderful. 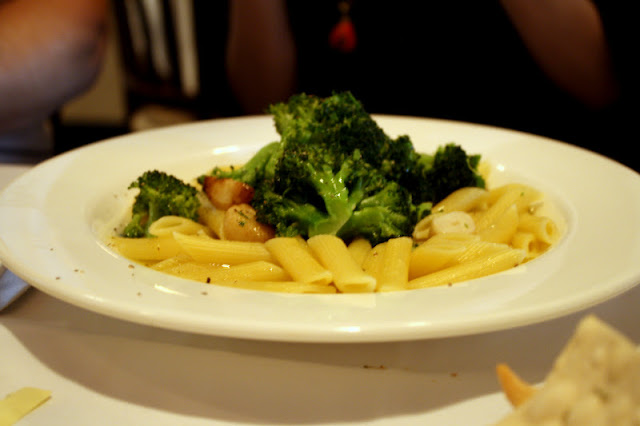 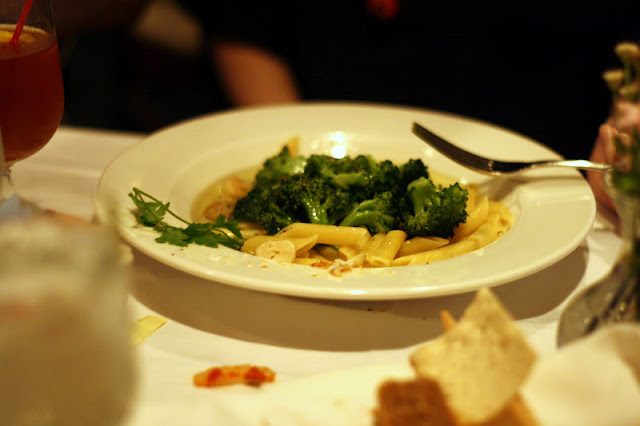 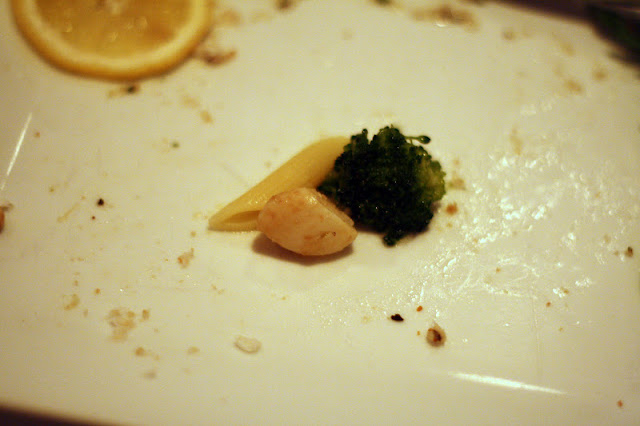 I'd also considered getting the penne with garlic, olive oil and broccoli, but when Elizabeth announced that's what she was getting, I knew I would get to have some - at least a couple of bites and probably leftovers, too. (Both were correct assumptions.) It was really tasty and I loved the roasted garlic cloves, of which I ate several. 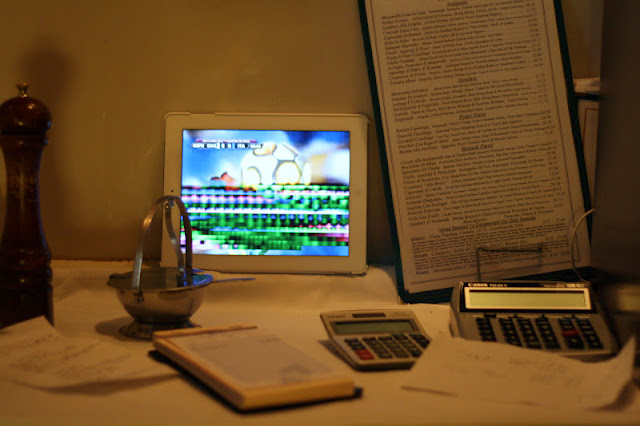 At one point I headed to the bathroom and noticed the waiters station... with an iPad showing the England-Italy Euro Cup game. I cannot tell you how happy this made me. Of course an authentic Italian restaurant was going to have Italian waiters who had to sneak peeks at the game.

(Would it have bothered me that they were keeping an eye on the game if the service had been terrible? Yes, probably. But I can say without a moment's hesitation that the service at Queen was by far the best service I have had in the last ten weeks in Brooklyn. No place else is even close.) 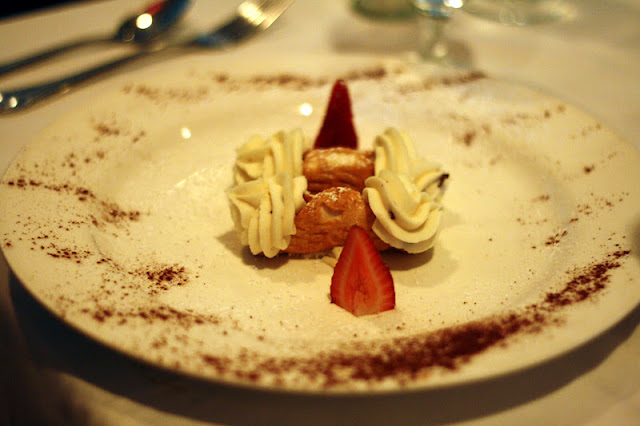 Kathy had a cannoli, which I had planned to get as well... 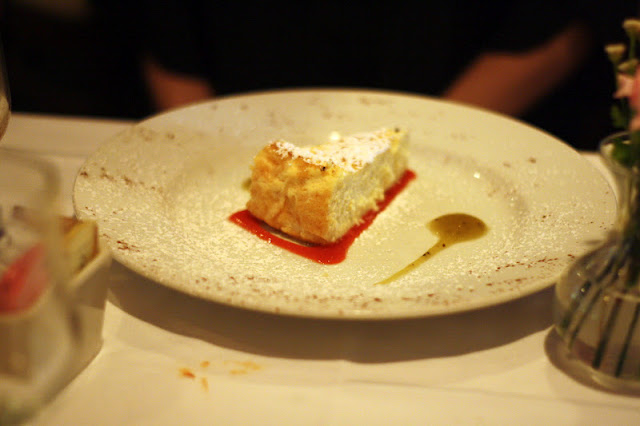 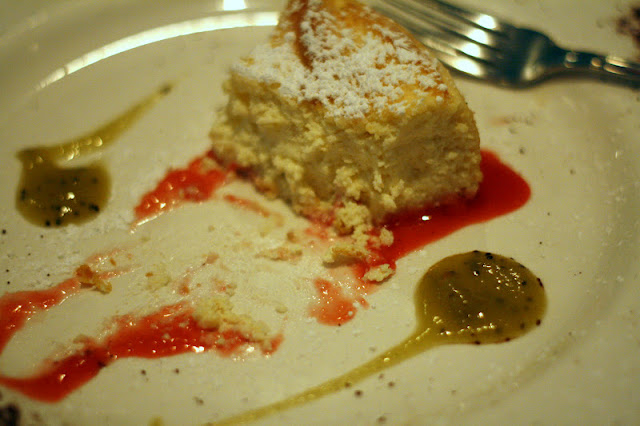 Until the man sitting to my right touched my arm when I was ordering and said "Get the cheesecake, it's the best in Brooklyn."

I have not had cheesecake in I don't know how long. Possibly my entire adult life. So I may not be qualified to make this statement, but then again when do I ever let ignorance stop me from saying something: it was the best cheesecake I have ever had. In my memory, cheesecake is so rich and heavy (wait, do those two adjectives mean the same thing?) and I really didn't have any desire to try it again. But this was really good, surprisingly light, and complemented nicely by the two fruit sauces. 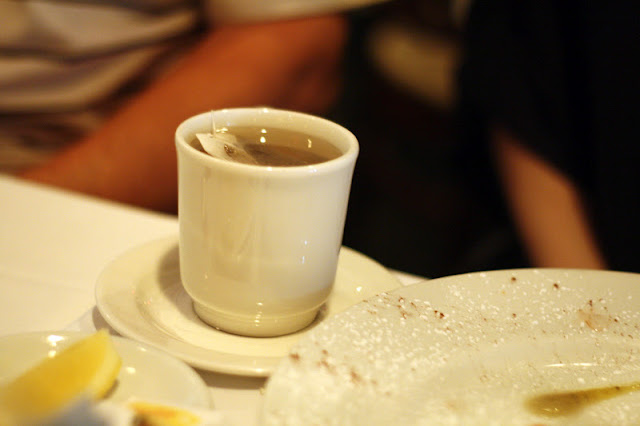 And we finished with coffee and tea, of course.

Everyone enjoyed this lunch. The funny thing is, despite Uncle George stating several times his desire for everyone to come dine here on him when he passed, none of his friends ever remembered coming to Queen with him. Rick, whom as I mentioned earlier had been visiting his uncle in New York City for close to 60 years and shared hundreds of meal with Uncle George, had never been to Queen before.

I am by no means an expert on Italian food. Not even close. I know more about almost all Asian cuisines than I do Italian, and I could tell you at least a half-dozen fast food promotions that are scheduled to be released in 2012 before I could tell you the provenance of Mozzarella alla Caprese. So take my opinion here with a grain of salt, but this was one of the best Italian meals I have ever had.
Posted by JustinM at 11:46 AM

It's almost as though he wanted his friends and family to discover this through a parting gift of sorts. I'm glad that the experience stood up to what he, no doubt, desired for you all. Very nice.

Wow, what a great post. I'm sure it was a bittersweet meal, but it sounds like a celebration of a really loved man, and at a restaurant that you will absolutely visit again. On a side note...I want about 6 of those mozzarella balls.

I really liked this! But wait.. Uncle George wasn't a Yankees fan?

Ania and Fritos: Thanks. I like to think those things, too.

Michelle: Did you ever see Ken Burn's Baseball? Doris Kearns Goodwin explains that when the Dodgers left Brooklyn, no Dodgers fans became Yankees fans. That would have been unthinkable. You either became a Mets fan when they started up or switched to another team (in her case the Red Sox). Uncle George would have been 30 in 1958 when the Dodgers left, so I don't know for sure but I bet that's what happened.

huh. maybe george often got takeout from there?

Very doubtful. I didn't know him all that well but I don't think he was a takeout guy - he liked to talk with the servers and other regulars at diners. He was a diner guy; he loved diners, just like Elizabeth does.

My guess is he went there only a couple of times but loved the food and thought it would be a great place for people to go when he was gone.

What a great tribute.
And that mozzarella looks incredible.

Absolutely, that mozzarella is making my mouth water. Do you think you'll be back?

Emily: Honestly, probably not. Even though it was really good, it's not someplace I would go on my own. And I've read there are more than 20,000 restaurants in New York. I didn't love it enough to return.

This was such a delicious meal, and such a nice way to share our stories about Uncle George, especially how none of us had been to Queen with him! Brooklyn Heights will not be the same without him.

Pouring out a lil liquor for your Uncle George. I have an Uncle George myself who is full character to the 10th power. Yours picked a great place, and funny how nobody remembers him going to Queens. Looks like a GEM! I am sure he is smiling down at this blog post :-)