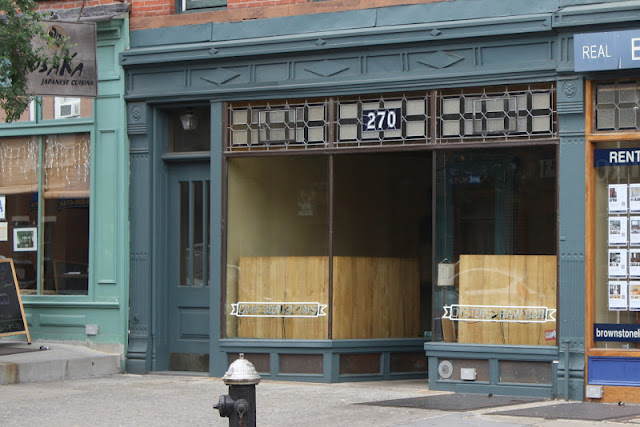 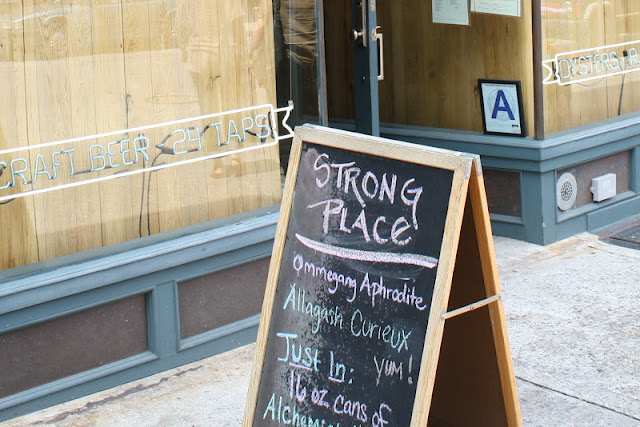 Elizabeth had told me that a lot of people leave town for Memorial Day Weekend, and I believed her, but I didn't realize just how empty the streets would be. They seemed about one-quarter as busy as normal. We had run a couple of errands and were discussing lunch. I suggested we just go for a walk and enjoy the lack of crowds.

We walked past a taco joint and looked at the menu, but I haven't had good luck with tacos here yet, and I was really hungry, not in the mood to take a chance on something. There was a burger place that looked promising, but we'd already purchased ingredients to make burgers for dinner. I had an idea for a place I'd been meaning to try, and we were ambling down the street.

Then we passed Strong Place. I had not heard of it but I noticed, through the long bar, a back patio. I looked at the menu in the window: pulled pork sliders. I heard a familiar series of notes in the air; it took me a second to recognize Van Morrison's "Celtic New Year." 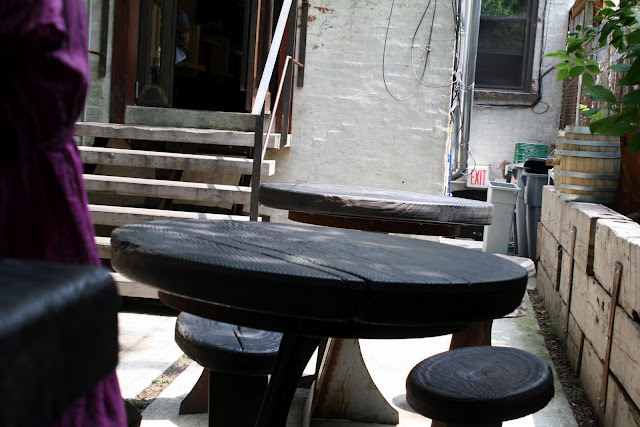 We walked through the restaurant and into the back courtyard. At first we sat at this round table, but the stools were as uncomfortable as any at which I have ever sat. 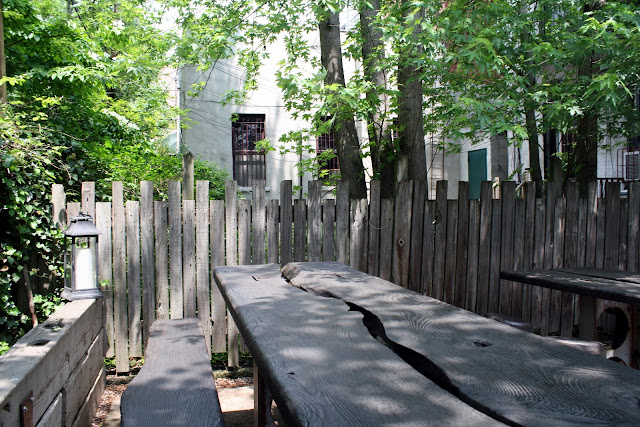 So we moved over to this long table, which was much more enjoyable. 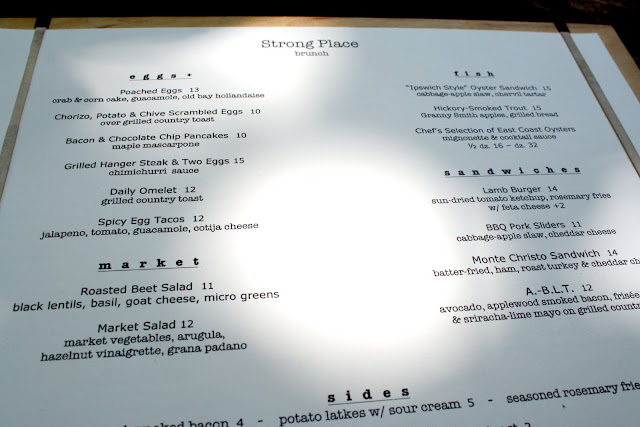 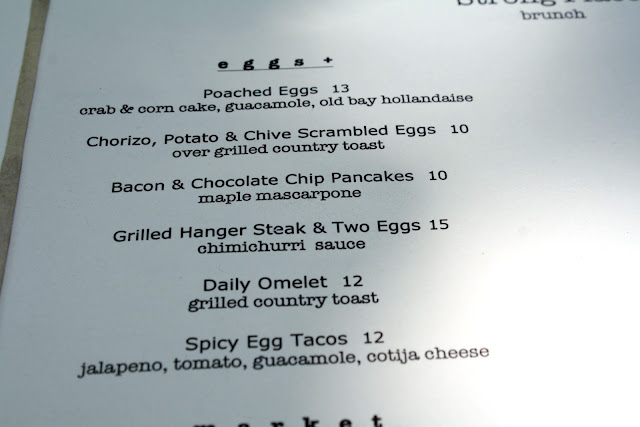 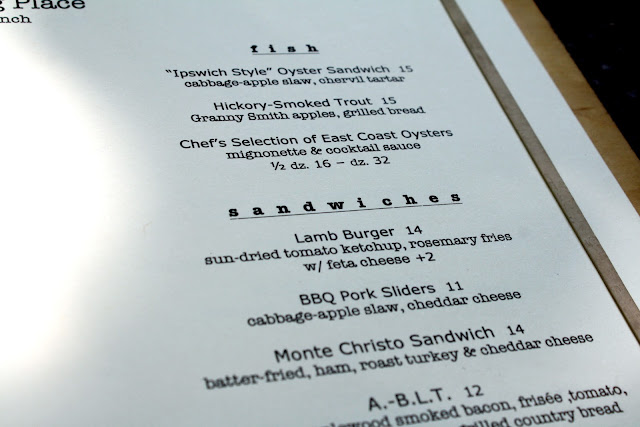 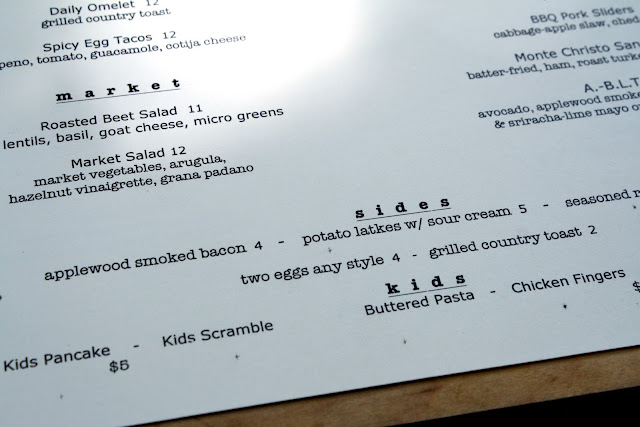 I've mentioned many times how much I dislike brunch, but there are really only two main reasons for that: 1) the crowds, and 2) too many ridiculous items. But as I mentioned, there weren't any crowds on this day, and the food was all pretty straight-forward.

"Should I get the A.B.L.T. or the spicy egg tacos?" Elizabeth asked me.

"Get the spicy egg tacos," I said. (Because I wanted to try those.) 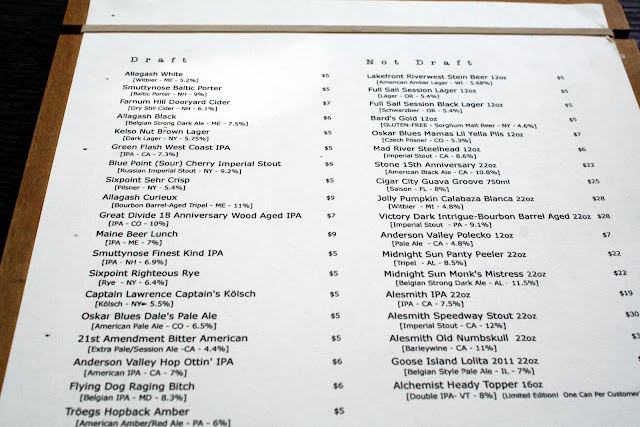 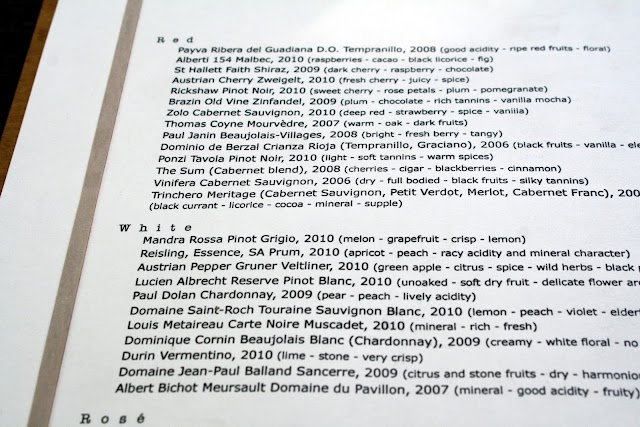 I recognized quite a few of the beers, from locations all over the country. I rarely drink beer with lunch (or brunch) but a cold beer sounded nice on this day. 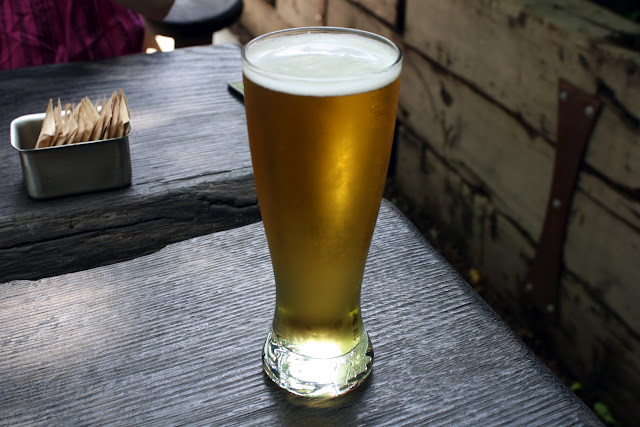 So I went with the Captain Lawrence "Captain's Kolsch." It was wonderfully refreshing. 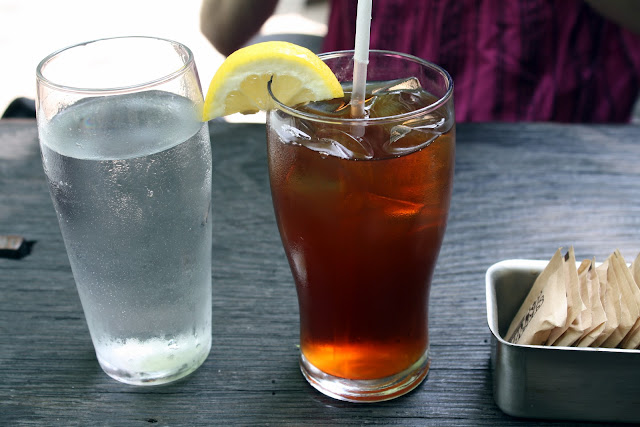 Elizabeth had an iced tea and I took a sip - it was great, some of the best restaurant iced tea I've had. 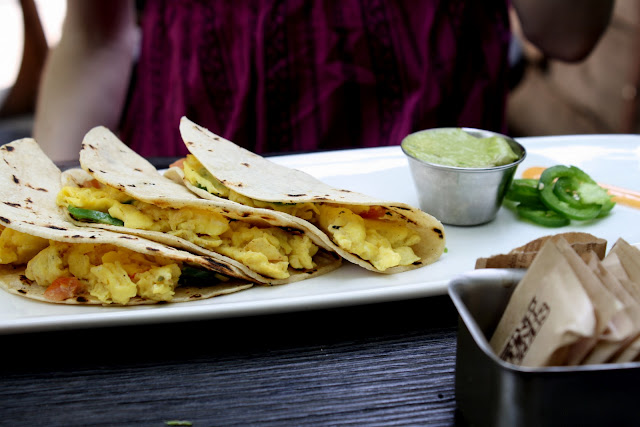 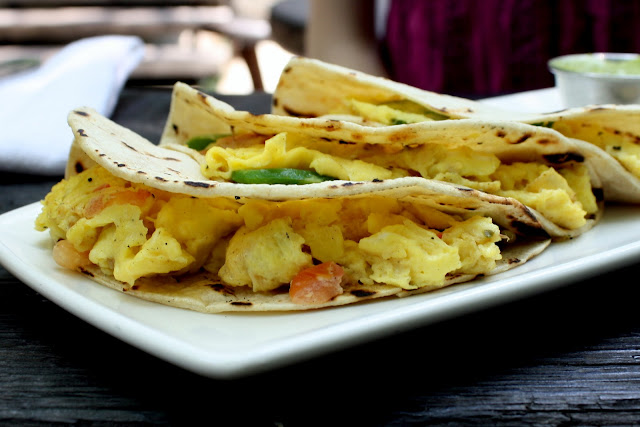 Elizabeth really liked the spicy egg tacos. ("They were delicious," she says just now.) I appreciated that the guacamole came in a separate container so that I could take a big bite of one, which I did. I thought it was just fine, though a little on the plain side. There were jalapenos and a spicy sauce on the plate and if these had been my tacos - instead of, you know, tacos I was stealing - I would have put that all over them. 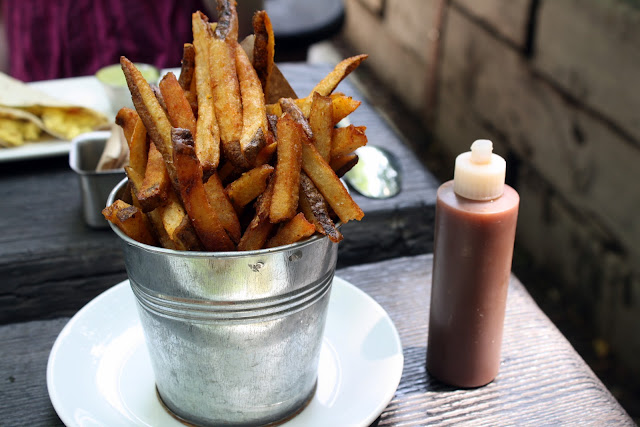 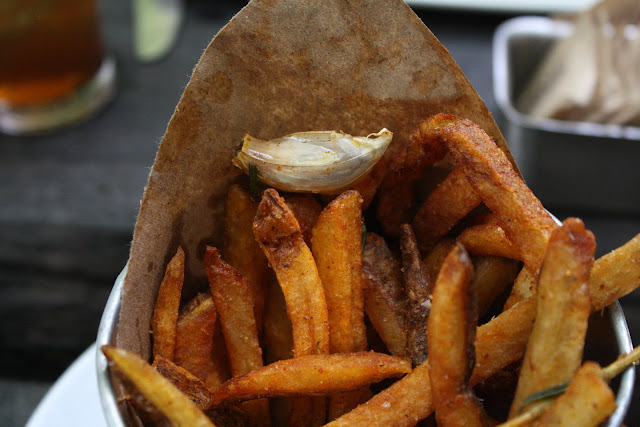 I haven't been eating a lot of fries in the last two months. Partly it's because I've been eating so much New York pizza, and certainly a large part of it is that fast food has been almost eradicated from my diet (the fast food joints are four blocks away; if we were to walk there we would pass by dozens of pizza joints and delis that are all better than anything at BK/Wendy's/McDonald's), but mostly I have realized that I just don't really like the fries at the vast majority of restaurants.

However, there is still almost no food I love more than properly-cooked fries, be they twice-cooked Belgian spuds or hand-cut, spiced potatoes. When I saw the "Seasoned Rosemary Fries" on the Strong Place menu, something about them called out to me.

I knew I'd made the right call as soon as they were set down in front of us. Hot and fragrant with rosemary and the two or three cloves of roasted garlic I found buried inside the order, these looked as appetizing as any fries I have had in years. And they tasted even better. Not overly salty, just crispy on the outside and soft inside. A small plastic container accompanied the fries and I inquired as to what it was.

"Our house-made roasted sundried tomato ketchup," the waitress informed me.

It was fantastic. One of the best ketchups I've ever had. I could have squeezed the bottle directly into my mouth. 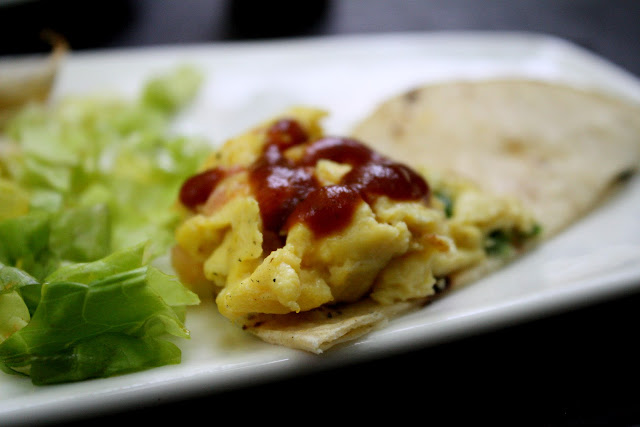 Elizabeth couldn't eat the last wedge of her third taco so she gave it to me. I put some of the ketchup on it. It was much better this way. 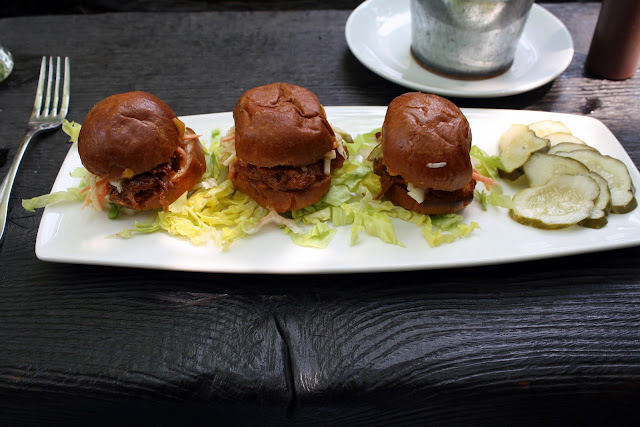 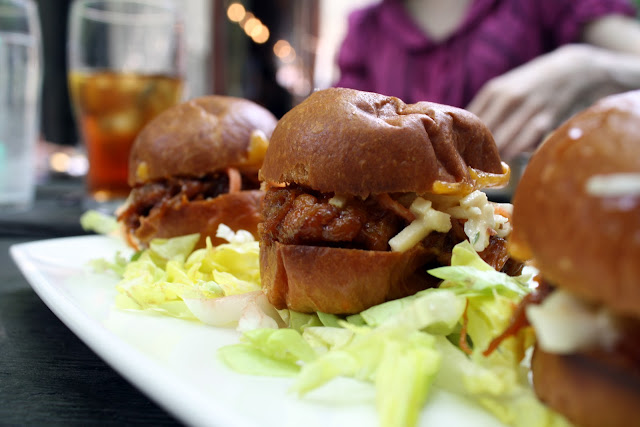 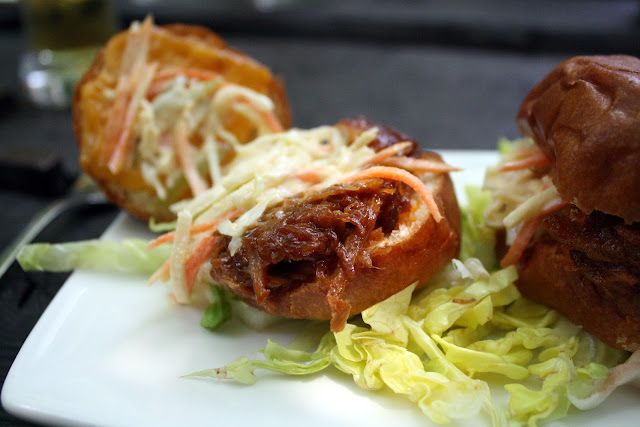 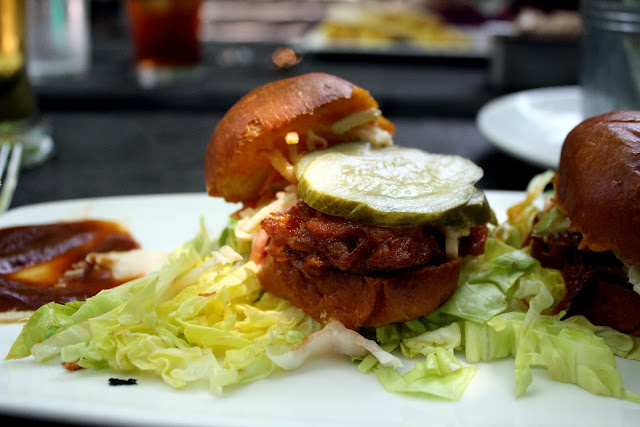 I had come this close to requesting the sliders without cheese: cheese on pulled pork is a flavor combination I have just never gotten. But then I decided not to make any modifications. And it turned out all right - there was only a little cheddar, and it actually played well off the apple-tinged slaw.

The pork itself was quite tasty, or rather the pork in sauce was tasty, as there was plenty of sauce while the porcine portions were rather meager. The buns were soft and the pickles were crisp. Like the egg tacos, the sliders were good, definitely better than average... but fell short of being great.

This was a wonderful place to have lunch on a lazy weekend day, and I would love to return on another similar uncrowded occasion. I'm not sure how much I'd like it during a busy evening, but I imagine I will find out eventually: the dinner menu has mini lobster tacos that Elizabeth wants to try. Strong Place's dinner menu doesn't call out to me like their brunch menu, but another order of those fries, a plate of the house-made pickles and a couple of beers and I'll be just fine.
Posted by JustinM at 9:00 AM

Those fries look awesome! Putting this place on my list.

Those fries are a screen-licking picture for sure.

Really: there are few things I enjoy more than New York City (the neighborhoods, not the touristy areas) on a long holiday weekend.

I really enjoyed this place and the food was really good! And the pickles were outstanding.