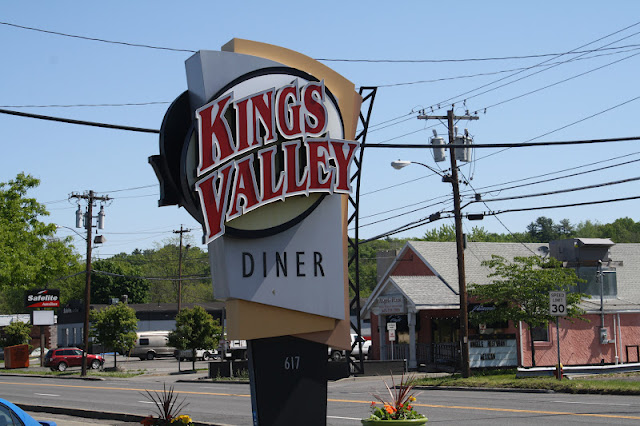 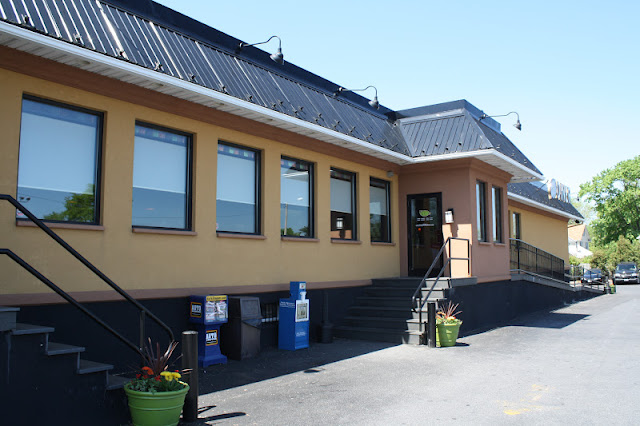 "This place used to be open 24 hours," Elizabeth said. "We would come in after going out for the night. Most of the people here were drunk."

I should have seen that as a leper's bell but I was too hungry to analyze. It would all become clear in a few minutes.

But let me back up a bit.

It was Saturday morning in the Hudson Valley, an absolutely gorgeous morning, maybe 70 degrees and bright blue skies. We had a few errands to run in preparation for a barbecue that afternoon but first we needed food. I was hoping for a return to Eddy's Restaurant, a place I fell in love with two years ago. But Elizabeth said she was not in the mood for Eddy's; she wanted something less greasy-spoon. I said I would go wherever she and her mom wanted. The name Kings Valley Diner was brought up and I thought it sounded just fine. 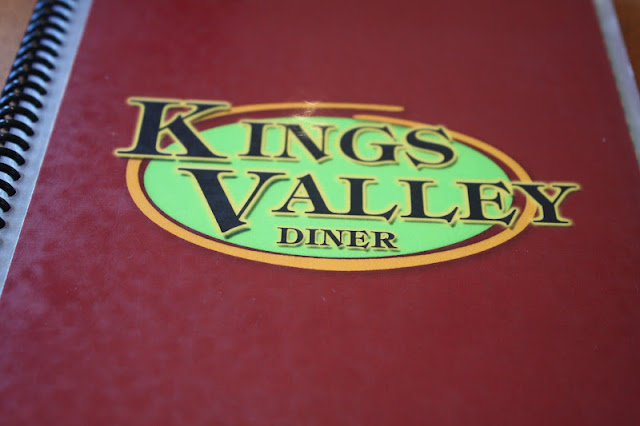 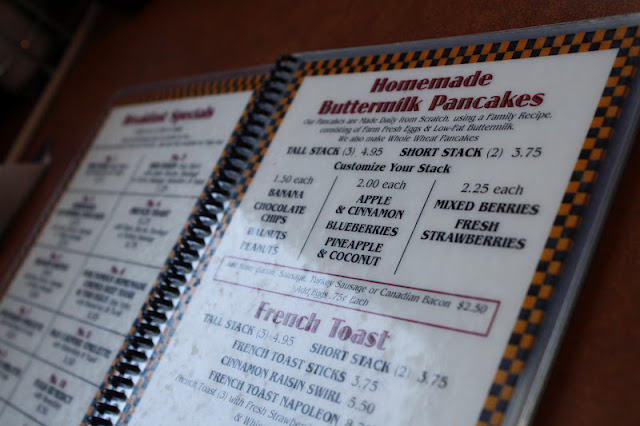 The place was busy when we entered and I thought that was a good sign. Elizabeth mentioned some other, sober memories of the place and I figured the food might be decent if she has been going here a long time. I browsed the extensive menu - the chipotle fried shrimp sounded delicious, though not at 11:30 AM - and decided on a sandwich while the ladies picked out their breakfast items. (Many people I know enjoy breakfast as their first meal of the day, no matter what time it is eaten - even if it's in the mid-afternoon. Myself, I only like it early in the morning or not at all.) 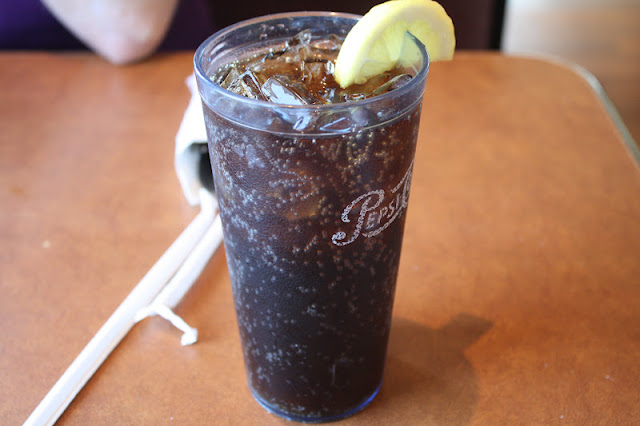 I prefer Pepsi Max, but Diet Pepsi will do. 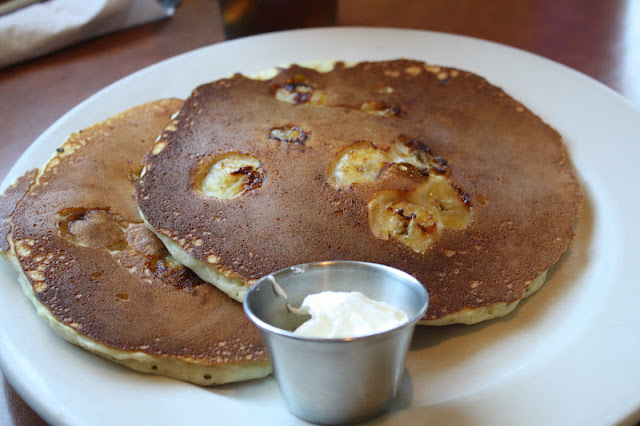 Elizabeth enjoyed her banana pancakes. I'm sure she could have gotten pancakes at Eddy's, but maybe not the banana version. 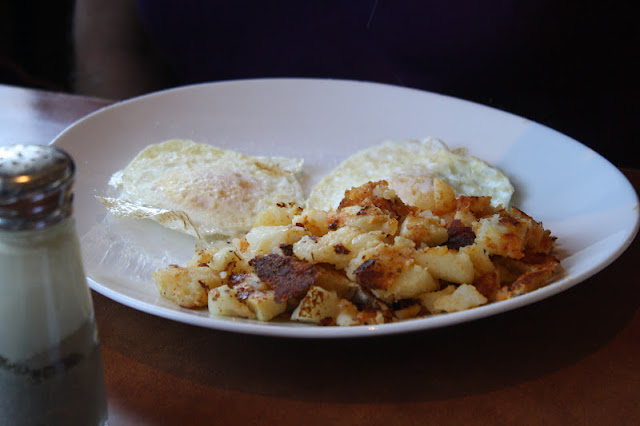 Kathy had eggs and hash browns, and she thought they were fine, especially after she drowned them with ketchup. (I don't believe I've ever seen someone use so much ketchup; more than once she has told us we need to keep a bottle of ketchup at our place for when she visits. We have Sir Kensington's, and a few packets of ketchup in a kitchen drawer, but we are not big ketchup users so we never have a bottle of Heinz or anything like that. One of these days we'll remember to get a bottle for her.) 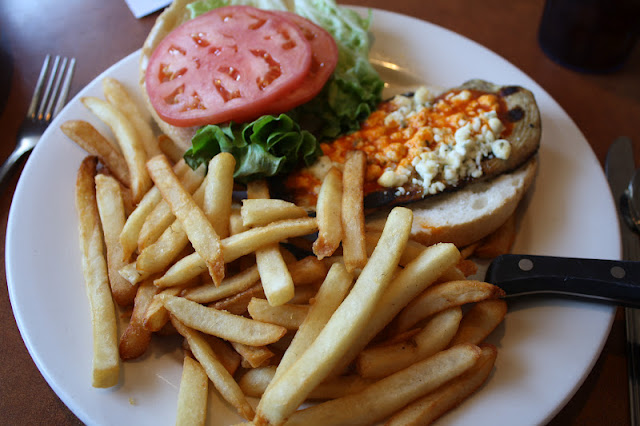 And this was my Buffalo Chicken Sandwich. Let's get some more close-ups, eh? 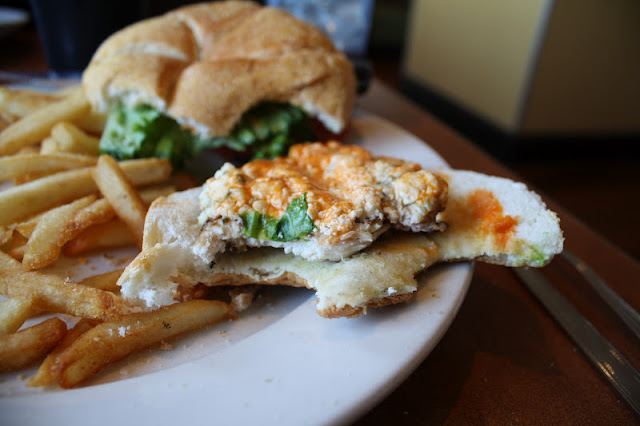 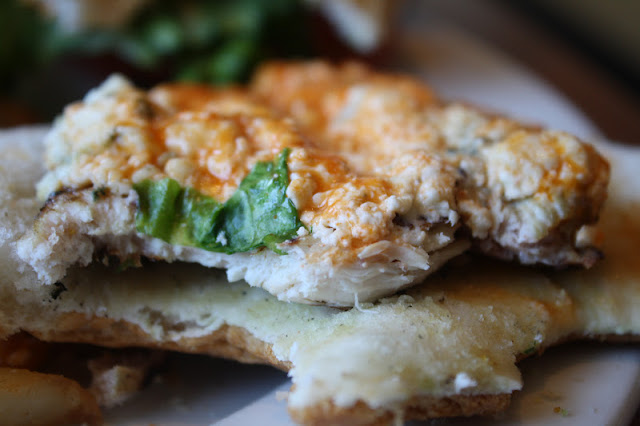 It was every bit as terrible as it looks. The chicken breast was pounded down to less than half an inch and cooked for God-knows-how-many minutes. Five? Ten? Thirty? I do not ever remember eating a more overcooked, flavorless, rock-hard piece of chicken. I briefly tried to imagine the cook who could put this piece of chicken on a bun and not feel embarrassed.

"Terrible," I said, and lifted the plate to show her.

The waitress came by our table. "How is everything?" she asked and then - I kid you not - immediately turned on her heels and floated away without awaiting a response.

Kathy, who worked as a waitress in her youth, put it bluntly: "That's what you do when you already know the answer is 'shit' and you don't want to hear it."

So I inhaled my fries and tried to eat what I could of the chicken... which was not much. It truly was awful. The roll, however, was good: soft and warm. So I ate that, too.

There was a time in my life when I could have seen myself coming to a place like this in the early morning hours - after a night at the bars - and not minding a sandwich like this. But those days are long gone.

"Yes," they both responded in unison.
Posted by JustinM at 10:00 AM

"Drunk food" only is good for the drunk.

In happier news, please obtain a bottle of Trader Joe's organic ketchup for your mother in-law ... she will love you forever (as if she doesn't already!) ... it's way good stuff.

Nosh: You've seen me four sheets to the wind before - you've never seen me pissed enough to think this food would be edible.

Anon 1: I believe at gunpoint I would have eaten those slices before finishing the chicken.

Anon 2: Actually, she's always telling Elizabeth she thinks she could have done better. Maybe the TJ's ketchup will bring her around to my side. I've never tried it before - I sense a new entry for my next TJ's post, eh?

I'm all for a new TJ post... but you knew that already.

I know you are! But I'm not sure when it will be. As I try new TJ's products I put the photos in a folder on the computer... right now it's got three products in it. Not enough. And I'm going out of town all next week. So it probably won't be for at least two or three weeks.