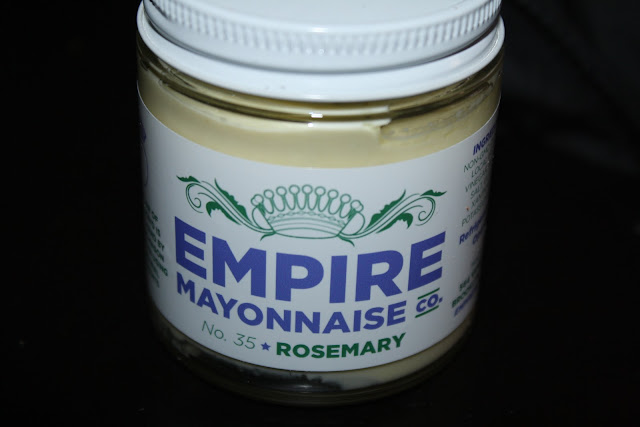 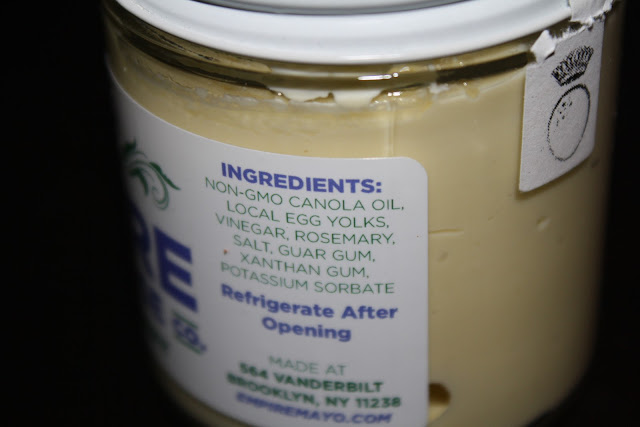 I wrote about this rosemary mayo (from Empire Mayonnaise Co.) the other day. It is a pleasant, rosemary-inflected mayo that I have been enjoying (or rather enjoyed, as it is all gone) on many things. 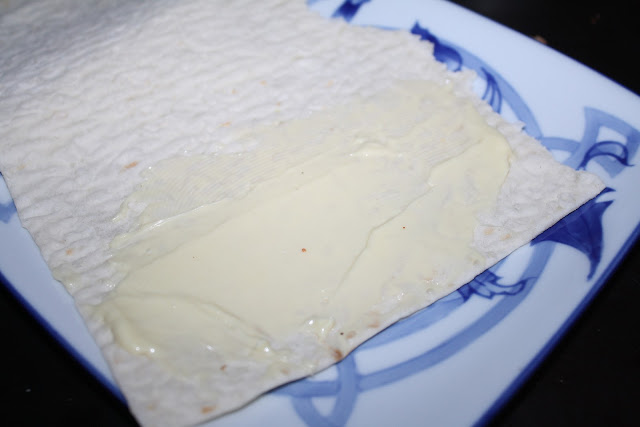 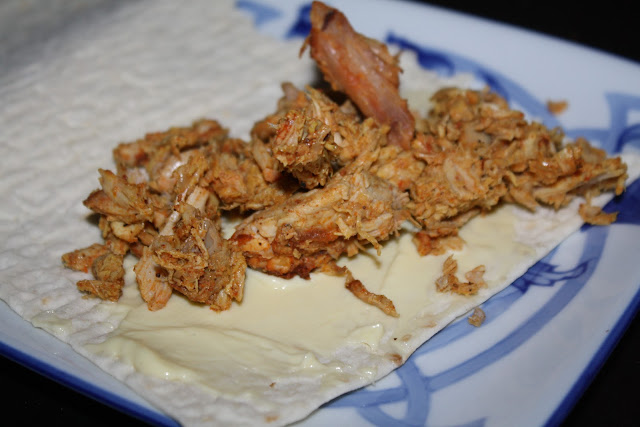 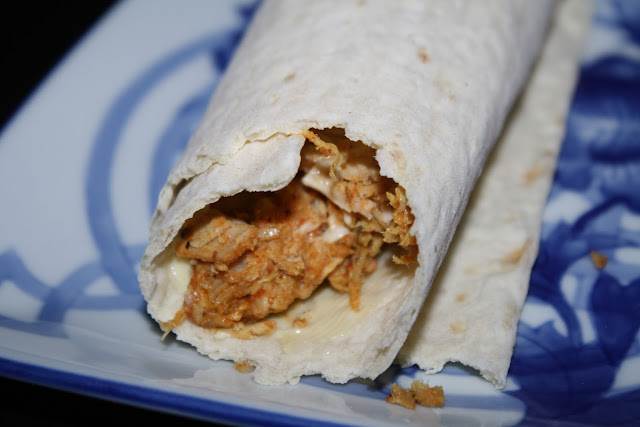 I had leftover pork from the nachos I made, so I slathered some of the rosemary mayo on half a Trader Joe's lavash, added some pork, rolled it up and consumed it. Delicious. 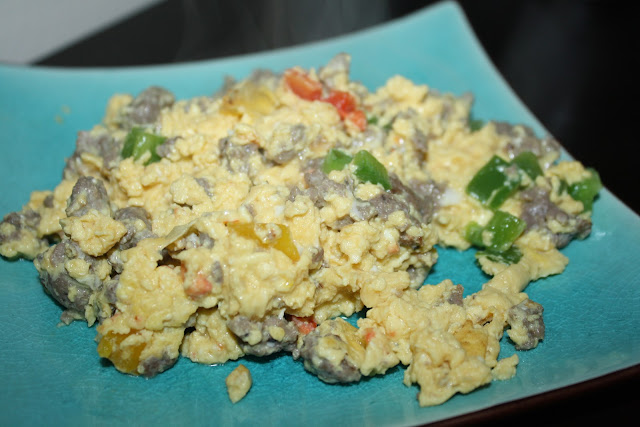 A typical post-workout breakfast: one egg, half a cup of egg whites, diced bell peppers, and crumbled wild boar sausage. 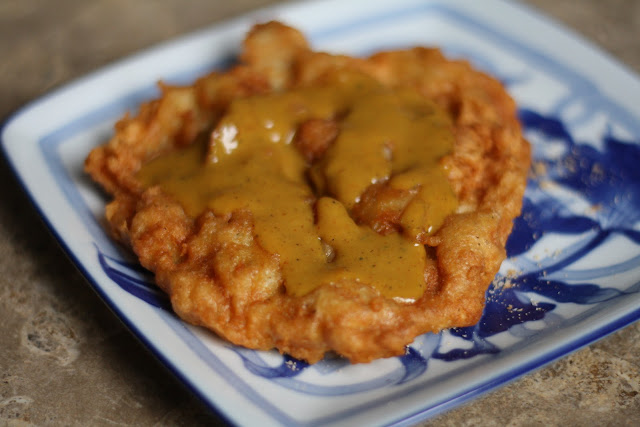 Elizabeth and I both caught what was probably the nasty flu that everyone has been talking about. I had it first, just after Christmas. She had it a week later. One day when she was completely zapped of energy she said latkes from Teresa's sounded good. So I went there (it's less than 100 yards away) and got an order of five. I loved them this time; I've now had them four times over the last two and a half years - twice were great, twice were lousy. I added mustard sauce to one, which I liked much more than the traditional sour cream or applesauce. 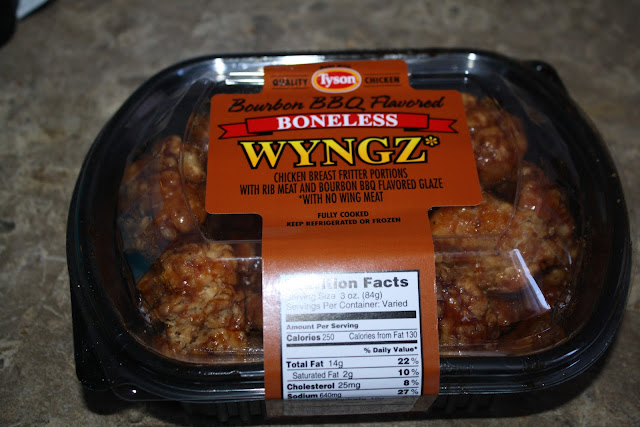 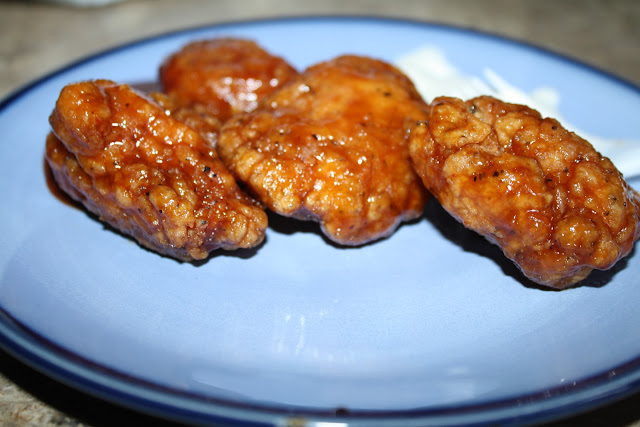 Last weekend Elizabeth attended her sister's baby shower so I was all alone. This was just fine with me: there were two great football games to watch. At the store, this package of Tyson boneless wings was on sale and I snagged the "bourbon bbq" variety. They were just fine, although not as good as the ones I make myself at home. (But already-cooked chicken that has been sitting out can't really expected to be better than chicken that is cooked to order.) 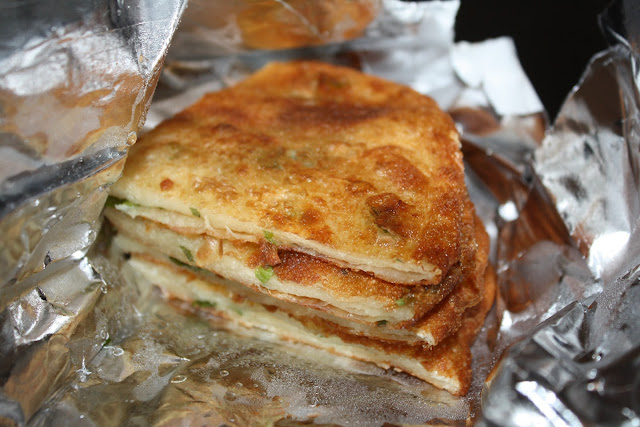 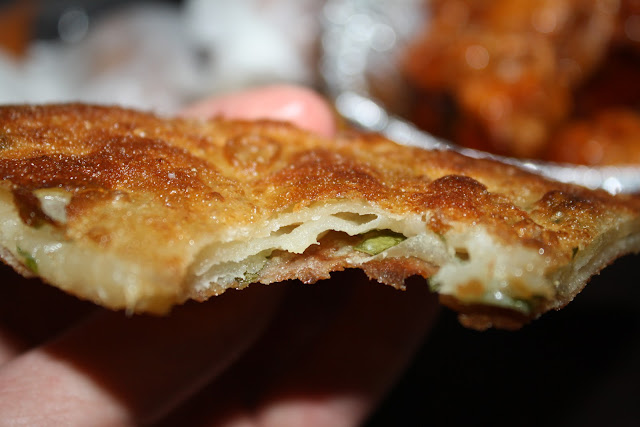 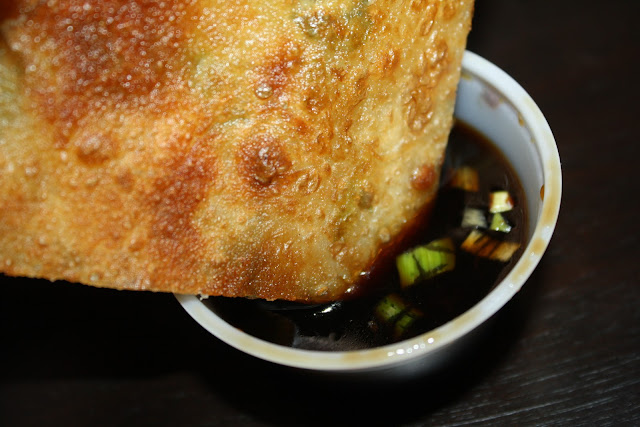 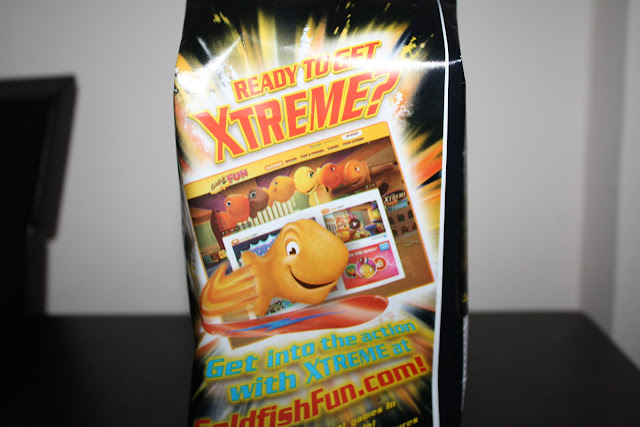 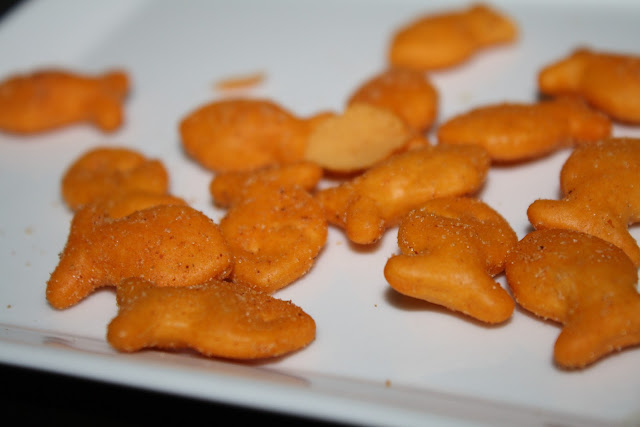 I decided to try "smoked bbq" flavor goldfish. The bag was right next to the checkstand at the store and on sale. Talk about an impulse buy. The name is redundant - true barbecue is always smoked - but the flavors are pleasing. Not really barbecue, but that shouldn't surprise anyone. Just a salty, smokey flavor, like a good barbecue potato chip. 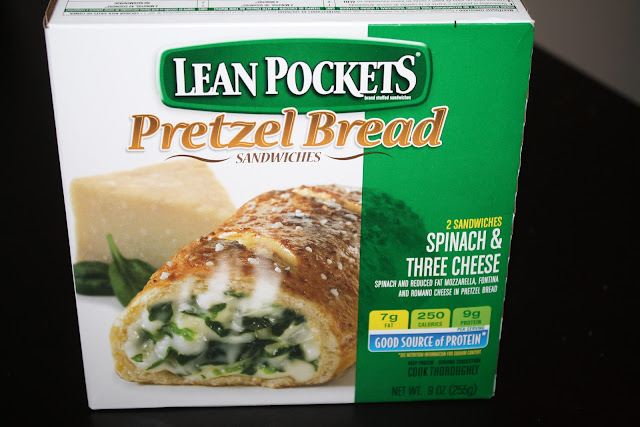 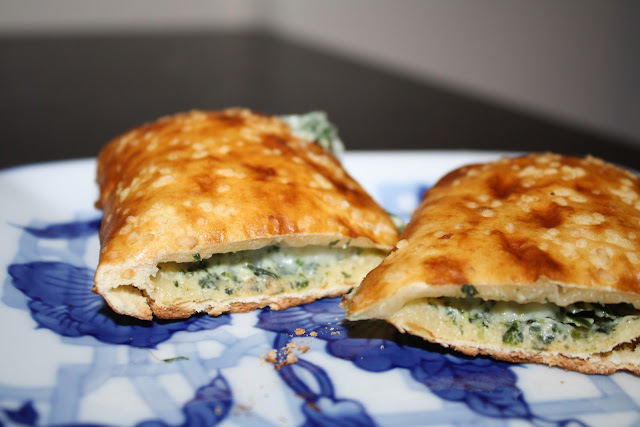 We made it 9 months without a microwave but we finally broke down and got one. It's too damn cold now and the microwave makes it too asy to heat things (like tea, soup, sauces). But the first thing I cooked was one of these Lean Pockets. The spinach flavor was mild but the three cheeses were good. These were on sale - $2 at Target - and worth it at that price. I don't think I would pay full price for this flavor, though. 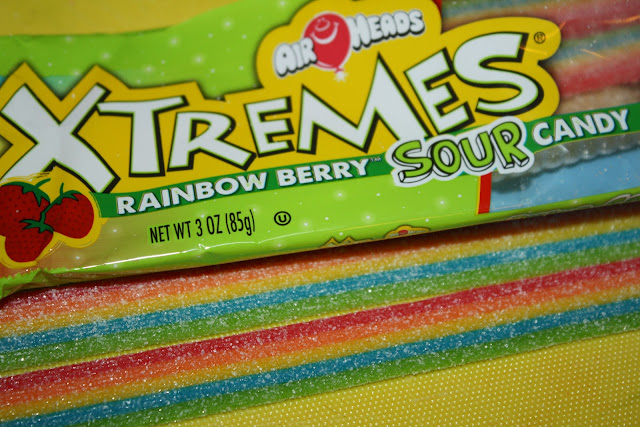 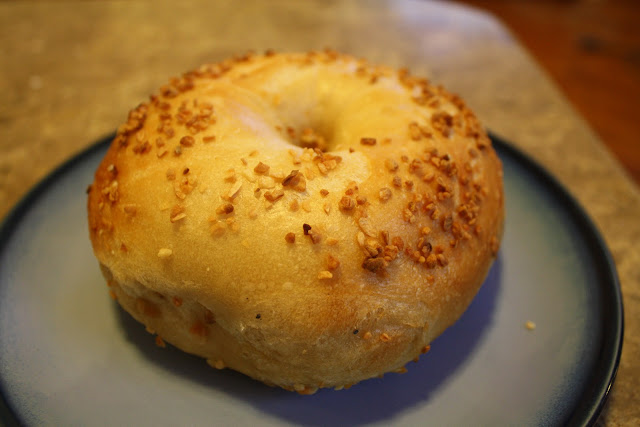 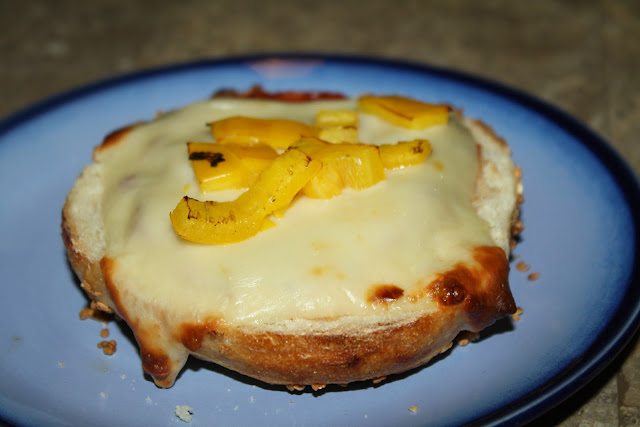 I went to a new bagel shop for the first time and they had aromatic garlic bagels, so of course I got one. I ate half in the morning by itself (it was delicious). Later in the day I ate the other half with some roasted-pepper pizza sauce, a couple of slices of cheese, and roasted yellow pepper. Also delicious. 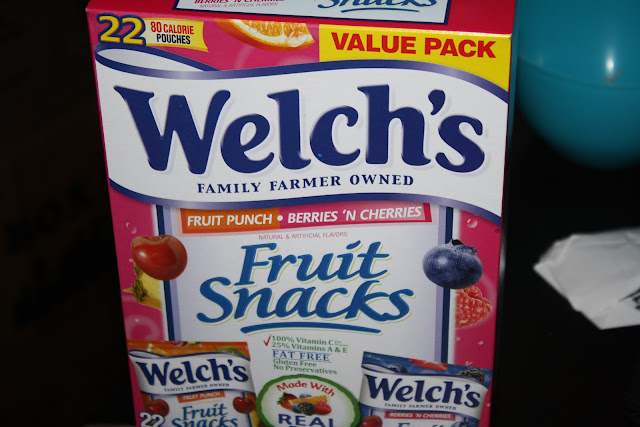 Also at Target, Elizabeth bought a box of Welch's fruit snacks, thinking she could take a pack or two with her to work each day. It was a big box - 22 packs - so she asked if I would eat some, too. I said probably, but wasn't really sure. They looked like something you stick in your kid's lunch box and figure he trades away for half a cookie.

It turns out, they're really good. I ate half of the packets in less than two days.
Posted by JustinM at 12:07 PM

The Welch's are my favorite and my kids' favorite. MMM berries 'n cherries.

Lordie how I miss good bagels.

You get one dirty mag free with each purchase of a family size shampoo.

Wait, scallion pancakes are actually a thing? Like something sold in restaurants? I though they were just something my mom came up with to cater to my fickle eating habits as a kid.

Yes, a good scallion pancake is wonderful. But not these.