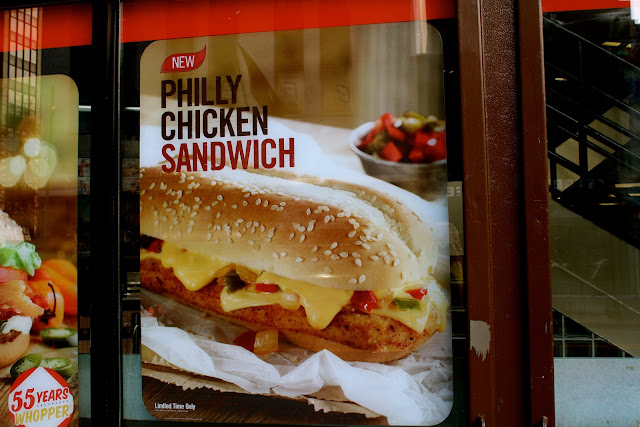 I've been to Philadelphia many times, but my favorite was unquestionably a summer day a decade ago. I spent the bulk of the morning and afternoon doing tourist activities. (As I mentioned the other day, if there's one thing I love more than eating and drinking, it's studying American history.) I took a trolley tour of the city, went to Independence Hall, saw Betsy Ross's house, etc. (Did you know there is no evidence that Ross ever made a flag, that the story was first told by her grandson decades after she had died?)

In the evening I turned my attention to hitting the town. I met up with my friend Tyler, who was going to medical school in Philly at the time. It just happened to be his birthday. Many beverages were consumed. As the evening was winding down, I forced Tyler to have one last to end his evening.

"All right," he yelled, getting up from the table. "But if one of my patients dies tomorrow, it's your fault!"

That's not the kind of comment that falls on deaf ears. Every nearby table turned at looked at us. I decided it was time to bid him goodnight, and I stumbled down the street to Rittenhouse Square to meet up with my friend Tom and some of his female college acquaintances. We stayed at the pub until it closed, when one of the sober girls offered to drive my car to get us all cheesesteaks. (I forgot to mention, I had driven from Pasadena to Philly. It's the kind of thing I used to do back in the day.)

I don't remember where we went for cheesesteaks that night - it wasn't Pat's or Geno's, as I had already heard of them - but it was a culinary epiphany. It was one of the five greatest things I have ever eaten. I have never stopped chasing the memory of that cheesesteak.

When I heard that Burger King was releasing a Philly Original Chicken Sandwich, topped with cheese, peppers and onions, I was relatively certain that it was going to resemble that Philadelphia cheesesteak in name only. (Until recently, when KFC claimed the title with their succession of insipid items, Burger King was my least favorite fast food franchise by a wide margin.) Over the years I have gone to BK on a few occasions because Elizabeth likes their Original Chicken Sandwich, and I've taken a bite every now and then and found it... not terrible. I was curious to see what the addition of peppers and onions did for it. 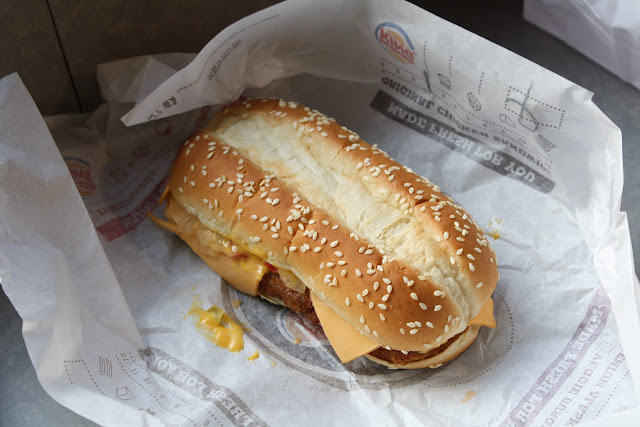 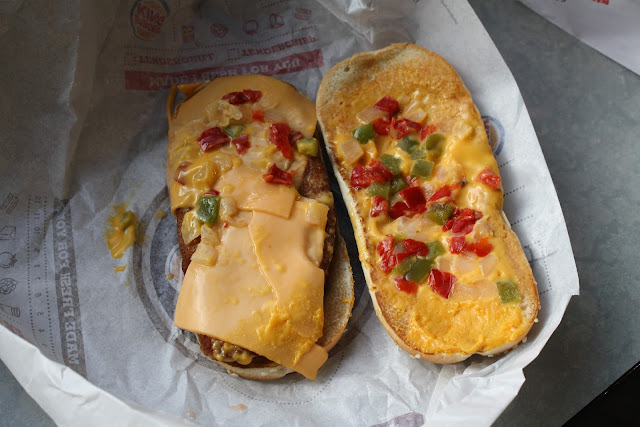 Not exactly a few dollars worth of peppers and onions here. Actually, kind of a measly amount, if you ask me. 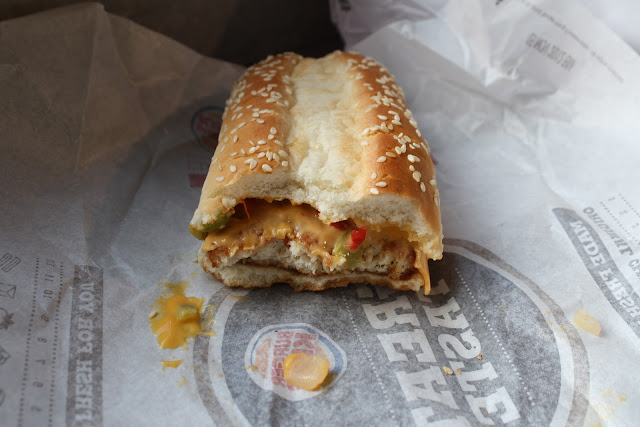 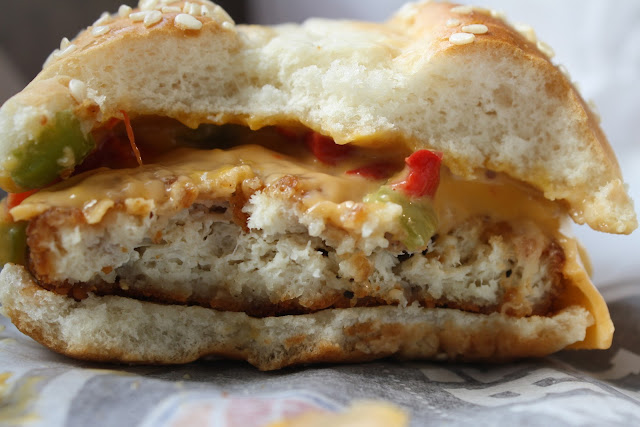 The peppers had a good flavor, I will admit that. But the bread was slightly stale and the (dry) chicken and cheese combination were the saltiest thing I have eaten in a long time. The other day I wrote about heating up some potato chips and drowning them in garlic salt. Those weren't close to being as salty as this sandwich. Within two bites I was craving a drink of water.

I really did not enjoy this. I can't say I'm surprised; with the exception of the Whiplash Whopper that I tried almost three years ago (that was freaking delicious), almost everything at Burger King tastes like absolute lowest-common-denominator cafeteria food.

But I had an idea, so I wrapped up half of it and took it home. 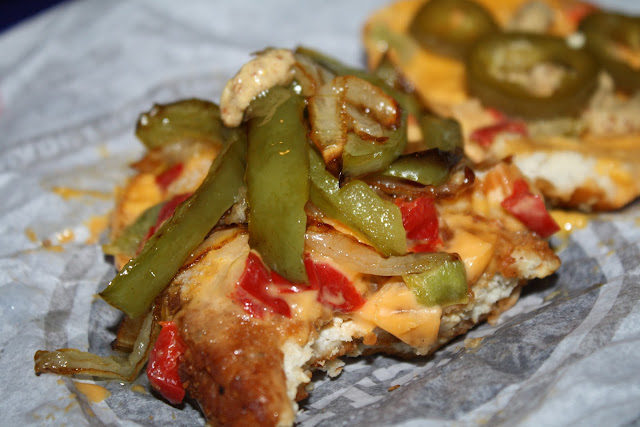 I'm not a big fan of the show Mythbusters, but one thing I definitely like about it is when an obviously apocryphal myth is busted, they sometimes see just to what extreme lengths they have to go to make the myth reality. (For example, when the myth about a cigarette lighter exploding in the backseat of a car on a hot day - and then setting the car on fire - didn't work out, they put five hundred lighters in the backseat and used an igniter to blow them up.)

So back at home I wanted to see what lengths I could go to to make this sandwich good. I sauteed some Vidalia onions and green peppers for a few minutes and piled them onto the meager amount of red peppers remaining on the sandwich. 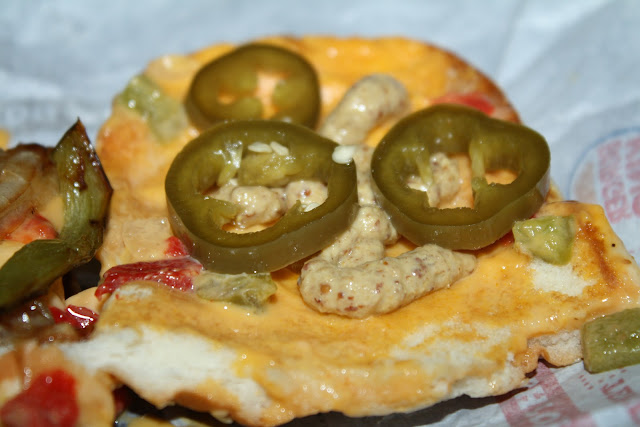 And then added some pickled jalapenos and mustard, as I sometimes do to cheesesteaks. 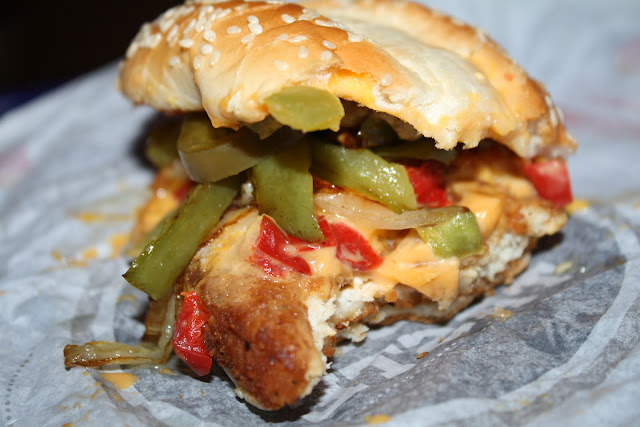 Well, there was no doubt this made the sandwich better, but it still wasn't very good. The saltiness was still prevalent and the ingredients were just mediocre at best. A typical Burger King sandwich. I guess I would get an Original Chicken Sandwich again at $1, but not this thing.
Posted by JustinM at 9:00 AM

I just learned that Betsy Ross fact on the history channel a couple of days ago. Her grandson must have been a rockstar PR dude.

i figured itd be horrible. love the taste of a whopper, though.

I have yet to eat a Burger King chicken sandwich that didn't some with a dry chicken patty.

I also tried this sandwich. I thought it was decent, but the dry chicken patty makes me mad.

that's why you gotta come back to Philly for the real deal!

The "chicken" patty really does taste like some sort of mystery meat. Could be a good sandwich if it tasted even a little like chicken.