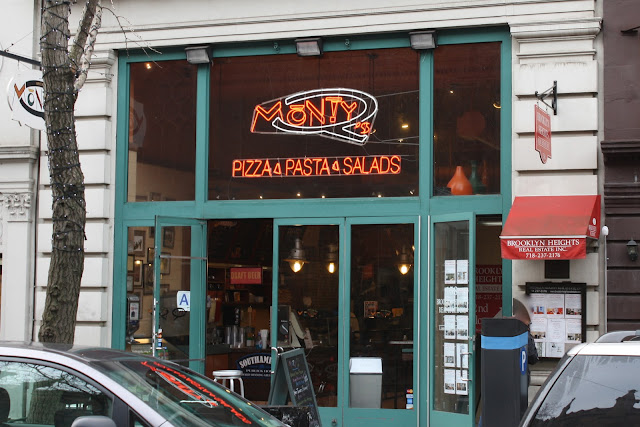 I've written about hundreds of restaurants, but I'm not sure I've ever done this before: I went to a restaurant not because I thought it looked good, but because I heard how bad it is. Three different people have told me that Monty Q's - only one block away from me - is just not good pizza.

Now, I love pizza. It's not my favorite food but it's certainly in the top 5, probably even the top 3. In my entire life I can only remember two slices that I thought were so bad I refused to finish them. (One in Los Angeles, one in New York City.) So part of me was curious: is Monty Q's so bad that I won't even eat a whole slice?

Also, I have walked by the place hundreds of times now - the smell coming out of it is really good. And at lunchtime there is always a crowd. I am being literal when I say that I have never walked by it on a weekday between noon and 2:00 and not seen it crowded.

To beat the crowds, I went on a Sunday in the mid-afternoon; there were only about half a dozen people in the place. 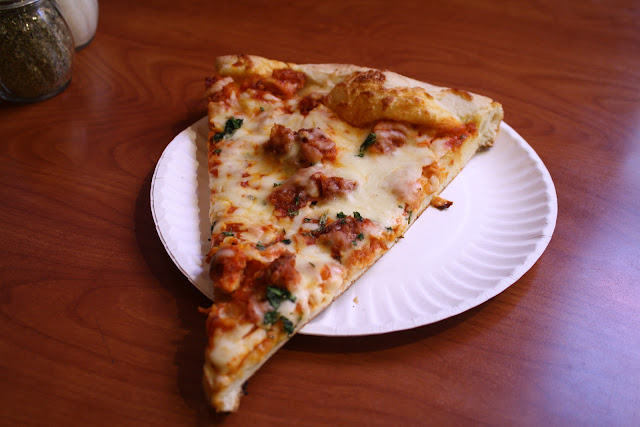 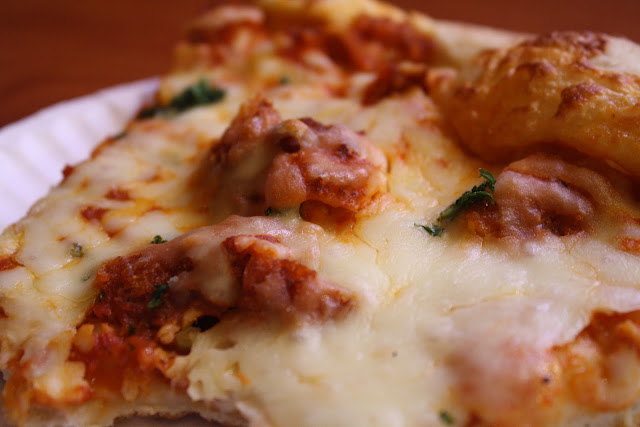 There was a slice labeled as buffalo chicken and I ordered that. The $4.50 price surprised me a little, I thought that seemed high, but if the pizza were good I would forgive that.

After two minutes of reheating I took a seat and dug in. Was it good? No. Maybe it would have been better a couple of hours earlier during the lunch rush, when it was probably made, but the crust was as bad as any I have had in Brooklyn, an overcooked brick that reminded me of a burnt Stouffer's French bread pizza.

I liked the chicken and there was a generous amount of cheese, but no buffalo flavor at all. No heat of any kind, actually.

Sill, it was pizza, and I ate the entire slice. I would not call it bad. Just a not-very-good slice with a bad price tag

But I will never return for a different reason. I interacted with three different people in Monty Q's: the person from whom I ordered my slice, the person I paid for my slice, and the person who gave me the slice when it was ready. I said "Thank you" to all three people. All three people ignored me. Not one said "You're welcome"; not one even smiled. Maybe they're instructed to behave this way. Or maybe they're just assholes. Whatever. It will never be my problem again.

In a place where I like lots of different pizzerias, there is no reason to return to a restaurant with mediocre pizza, high prices and rude service.
Posted by JustinM at 10:00 AM

This slice looks like it's a day old, straight out of the fridge. Jeez, even a slice a few hours old reheated in an oven should look way more appetizing than this.

If you finished this, I'm curious what the two slices looked like that you DIDNT finish, because this looks awful.

Pete: It definitely did not taste as bad as it looks. It just wasn't very good.

Michelle: One slice was the mole pizza I tried in October on the UWS before the Regina Spektor show. The other was 5 years ago at the L.A. Farmers Market, a hideous grease bomb of gummy dough and oily cheese.

Unrelated topic - wine.woot.com has a 12-pack of Brooklyn Brine pickles and after your various posts featuring their pickles, I so want to buy them. I just don't know if my fiance (who doesn't really like pickles that much) and I can go through that many... decisions, decisions.

This looks like diogiornos and for 4.50, I'd better be getting a soda or 2 medium to good quality slices (medium quality NYC pizza is like good quality in other places, or should be). I don't go to Texas expecting shitty BBQ.

DiGiorno is much better than this.