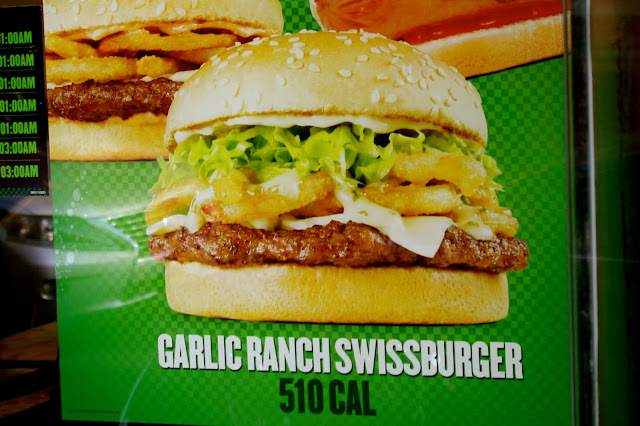 I'd only been to Checker's/Rally's once - those godawful "chicken dippers" that turned out to be rubbery chicken (maybe) pieces tossed in more salt than any fast food product I can ever remember eating. A few people told me that I should not judge the place by that one promotion, that the burgers there are pretty good. I wasn't in the mood to return and try a burger - if I want a burger out, both Five Guys and Shake Shack are closer than Checker's - but then I saw this promotion for the Garlic Ranch Swissburger. I love garlic; I don't like ranch. But it was an interesting combination for a fast food burger. And, at only $1.50, not a bad deal. (Yes, it's advertised as being only a buck, but as I've written many times, the price is always higher in NYC. Whatever - it's still a much better deal than that $4.50 crappy chicken sandwich from Burger King I wrote about last week.) 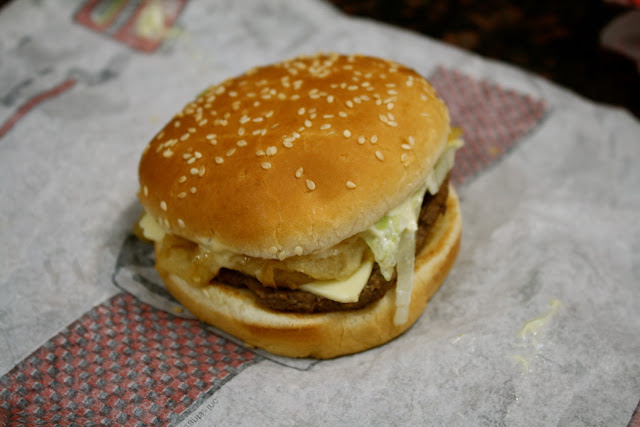 I got to Checker's early enough that there wasn't a line. (On my previous attempt to order something at this Checker's, I stood in a line that did not move for ten minutes before I just left.) I ordered the burger - it took a minute to convince the employee that I just wanted the burger by itself and not as part of a combo; she claimed I had to order a combo because "there isn't a button for the sandwich just by itself" - and then I received it in less than two minutes.

It's not a big burger but I did not expect it to be at that price. 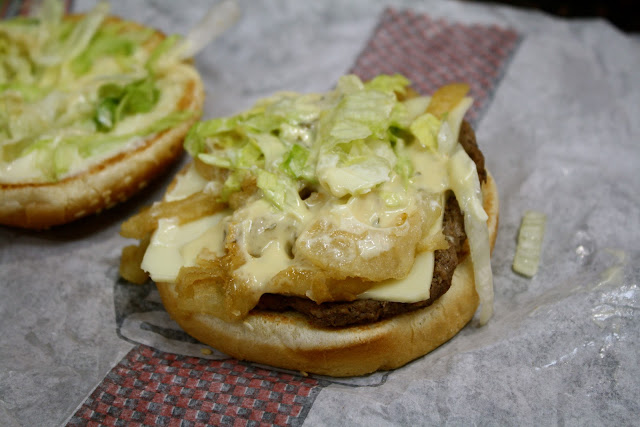 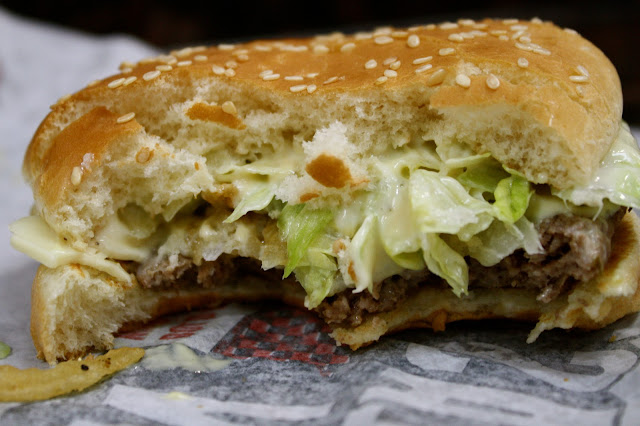 But it was pretty tasty. In addition to the patty were crispy onions, a "roasted garlic parmersan ranch," Swiss cheese and lettuce. The flavor of ranch was quite strong. I wish the flavor of garlic had been more pronounced, but then I say that about almost everything.

When I want a snack in my neighborhood, I usually get a bagel or a slice of pizza, so I don't see myself ever getting one of these again, but I liked it. The price is certainly good. But one things blows me away, and it's something I rarely talk about here: How the hell can this thing contain 510 calories?

I've seen in print that Rally's/Checker's is unhealthy even by fast food standards, but this puts things in perspective. This was one of the smallest fast food burgers I have ever seen. That's not a knock, because this is just a buck (or buck-fifty) and probably isn't intended to be a full meal for anyone but those with small appetites. But a comparable McDonald's cheeseburger has 300 calories; Burger King and Wendy's both offer the same size burger with 290 calories.

Chick-fil-A's Spicy Chicken Sandwich - which is a fried chicken breast - is 490 calories. I don't know how Checker's manages to grill a tiny burger and make it more unhealthy than a fried chicken sandwich, but that's impressive in its own way.

But even with this new information, next time Checker's comes out with an interesting burger promotion, I'll probably try it. Especially if it has "garlic" in the title.
Posted by JustinM at 10:00 AM

I bet you at least 150 of the calories comes from the ranch and 100 from the cheese. Chick-fil-a puts nothing on their sandwich so it only stands to reason it would be a bit less.

How do you feel about their fries?

According to their website, a slice of cheese is 30 calories. You may be right about the ranch, but still, a grilled burger should not have more calories than something that is cooked by submerging it in oil.

I did not like Checker's fries at all the one time I tried them, but I don't like seasoned fries.

i love your blog! read it every day :)

The Checkers by me is horrible. Hollow and limp fries and all. Ive never gotten one of their burger's out of protest for them not following national price promise. But if the sauce sounds promising. Love the idea of roasted garlic.