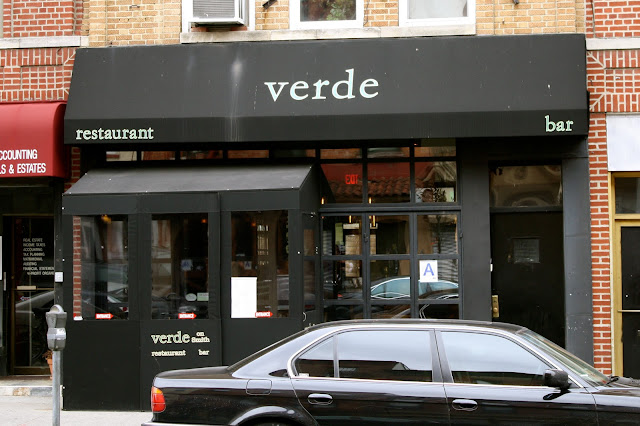 For being a January morning, it was pretty nice out. It was by no means warm, it was probably in the mid to high 40s, but it was sunny, and compared to what it had been just a week earlier, it felt downright tropical. I suggested we go out for lunch and stop wherever we wanted. Nothing was really calling out to me. At one point we passed Verde, and I looked at the brunch menu. It seemed like something right up Elizabeth's alley.

"Does this look good to you?" I asked.

"Of course," she replied. "But does it look good to you?"

She knows that I have a serious contempt for brunch. But I was willing to make an exception on this day. 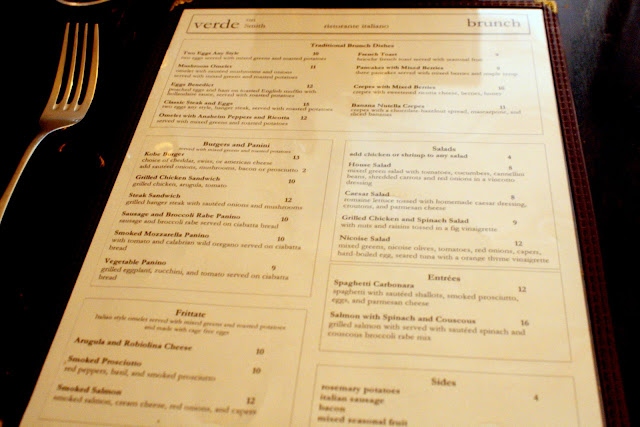 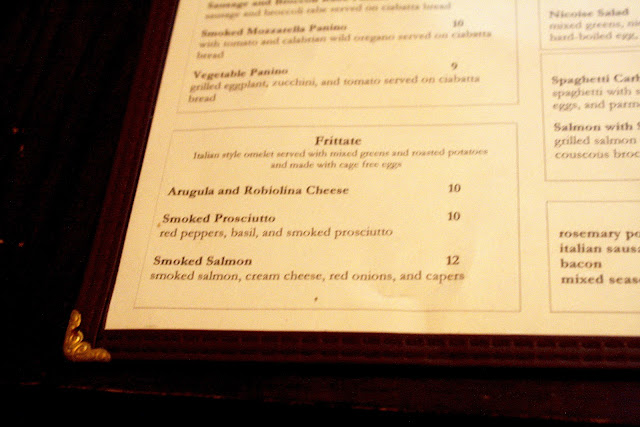 I wasn't really in a burger mood (for a change) and my eyes drifted to the "frittate" section of the menu. The smoked prosciutto sounded interesting, so that's what I ordered. 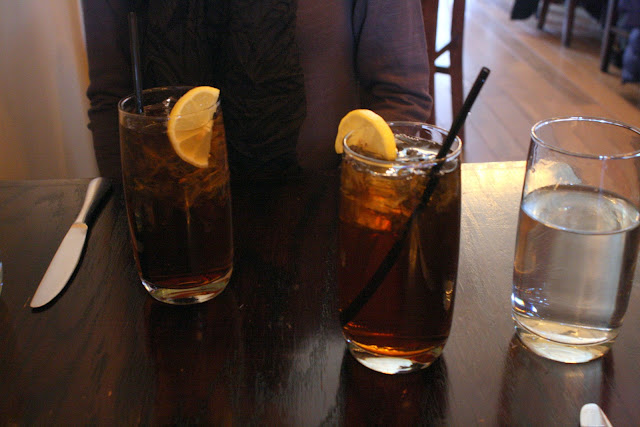 I was in the mood for a beer but I did not like Verde's selection. They also have a $14.95 all-you-can-drink special on the brunch menu, with a choice of champagne, mimosa, bellini, screwdriver, or bloody mary. I encouraged Elizabeth drink a bunch of bellinis. I could tell she was thinking about it. But in the end we both got iced tea. 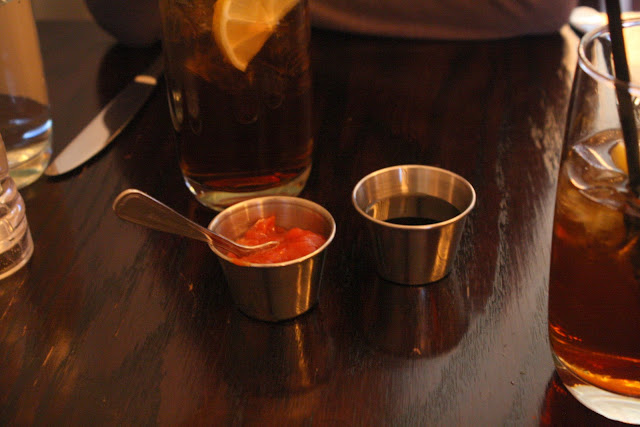 They brought us ketchup and maple syrup about twenty minutes before our food arrived. 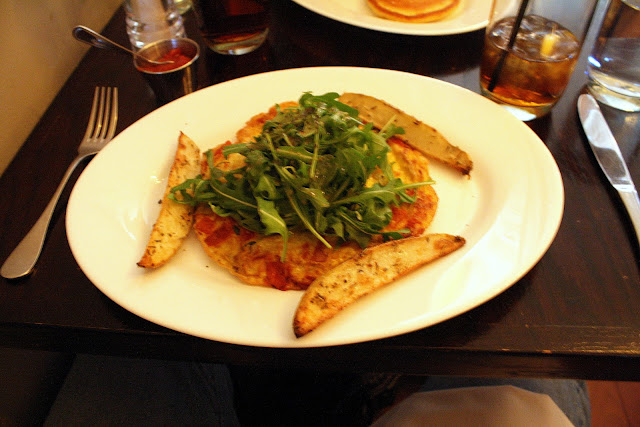 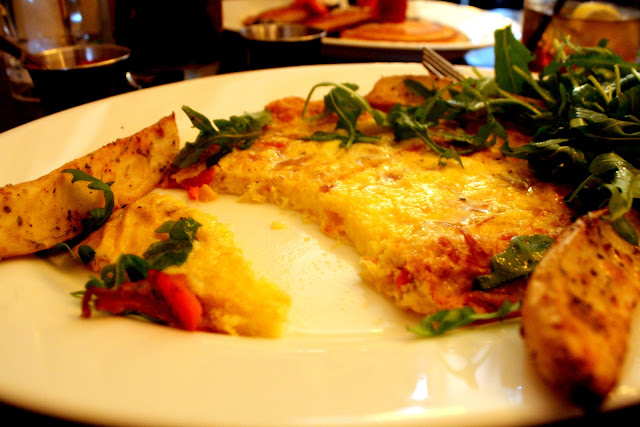 My frittata was average. There was hardly any prosciutto in it and what was there turned out to be stringy, over-fried pieces resembling bacon bits. But at least there were plenty of pieces of red pepper and overall the frittata tasted good. The potatoes were cold. Not room temperature. Cold. They had been sitting out for a while.

On one hand, I had hoped I would receive more than this meager amount of prosciutto for the ten-dollar price tag. On the other, I liked the fritatta, and... at least it was only ten dollars. I can't tell you how many times I have paid much more for inferior dishes at brunch. 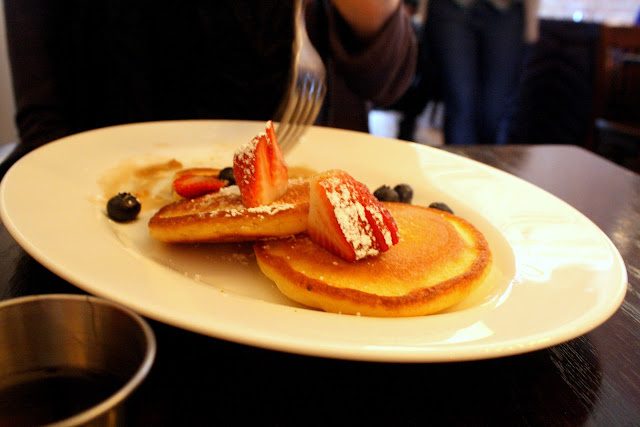 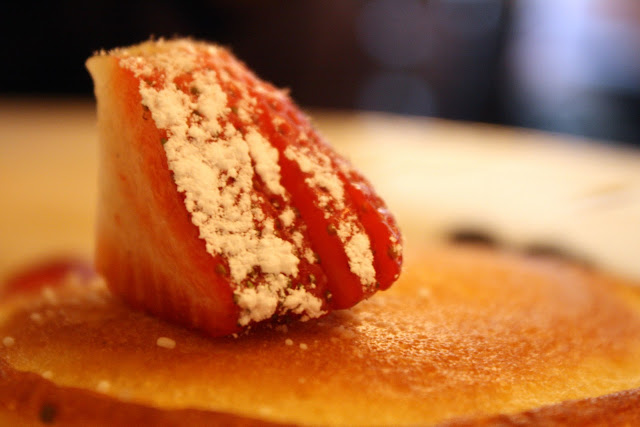 Elizabeth had the pancakes with mixed berries, and she was much more pleased with her choice.

There is an attractive bar at Verde. Actually, the whole place is pretty attractive, with brick walls and pretty chandeliers, not to mention a back patio (that was closed). I wouldn't mind going back for a drink at the bar. But nothing about the food impressed me. I do not plan to eat there again.
Posted by JustinM at 10:00 AM

Unless that plate is massive, those look like some pretty small and pathetic pancakes. I hope she at least got a side with that.

It's not really brunch if there's no buffet.

Or a little baby with a Tecate can, in your case.

This has nothing to do w/this post. But, I was wondering if you ever tried the sausage stuffed jalapenos from that novel as "football eats". My Seattle Seahawks are still in it :) Playing Atlanta on Sunday!

Thanks for your blog Justin, it's a welcome distraction during a usually stressful workday!

I was going to make them while back at my parents' house... I forgot until the last week I was there, when I already had plans for every meal.

I really liked the Seahawks when I was a kid because they always seemed to beat the Raiders. But as an adult I haven't really cared about them. I'll be pulling for them Sunday, though, I've never been a Falcons fan.

Sorry kid, that was brutal.

I hate getting jipped on proscuitto!!