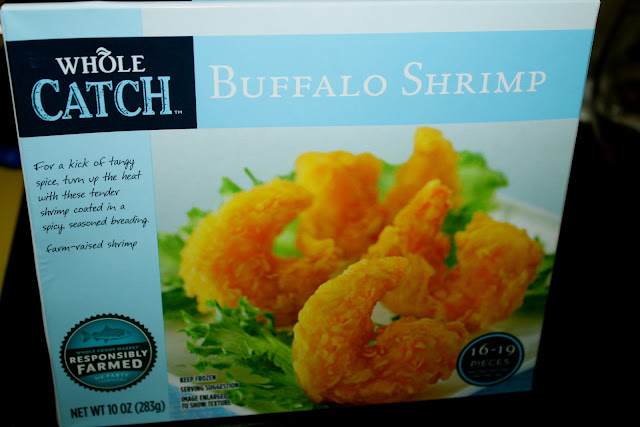 I had tried these "Whole Catch Buffalo Shrimp" (from Whole Foods) a few months ago and I remember liking them, but hadn't really remember just how much. Then, when I was visiting my parents last month, I cooked a package of the non-buffalo variety of these shrimp for my mom and myself. They were fantastic. My mom, who is not a big fried-seafood eater, said they might have been the best popcorn shrimp she has ever had.

So the other evening, when Elizabeth and I were at Whole Foods, I made sure to pick up another package of the buffalo shrimp. A day or two later, when we still had some leftover hoagie rolls (from the lobster rolls I made), I suggested making some shrimp po' boys. Elizabeth agreed. 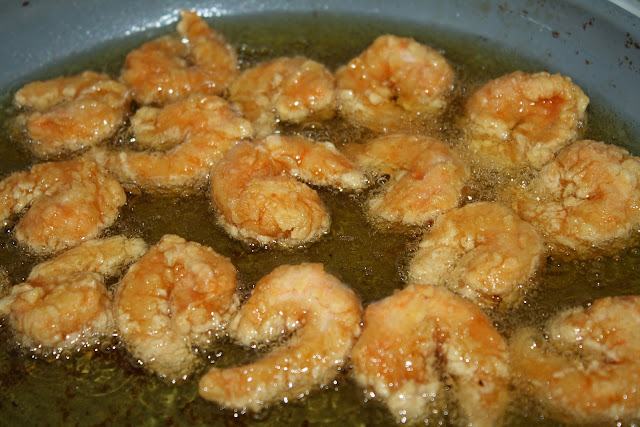 I fried them in the Greenpan, about two minutes on each side. 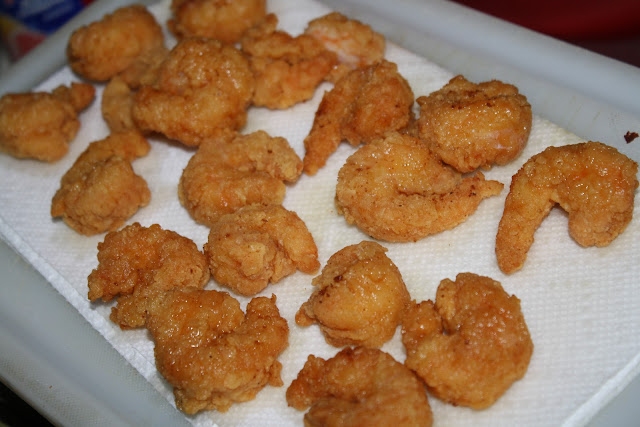 While I like lobster (and probably crab) more than shrimp... there is just something about golden fried shrimp, fresh out of the oil, that makes me extremely happy. 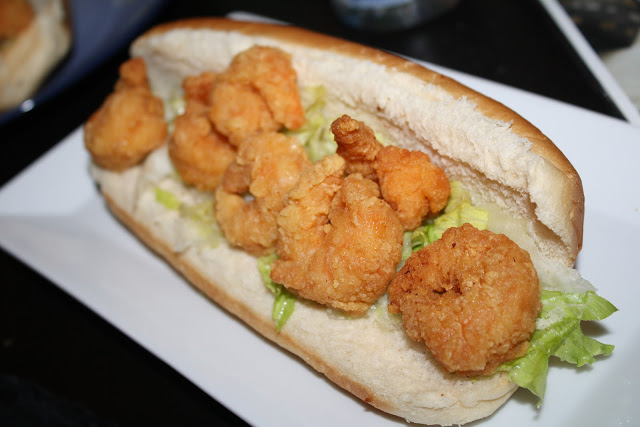 I tucked a handful of chopped lettuce into the hoagie rolls, and then layered several of the buffalo shrimp on top. 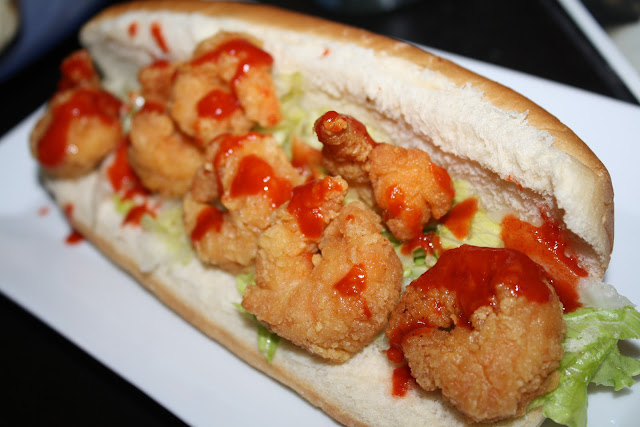 And then several shakes of Tabasco's wonderful buffalo sauce. The shrimp themselves have a bit of a buffalo flavor to them, sure, but a little (or a lot) more can't hurt, right? 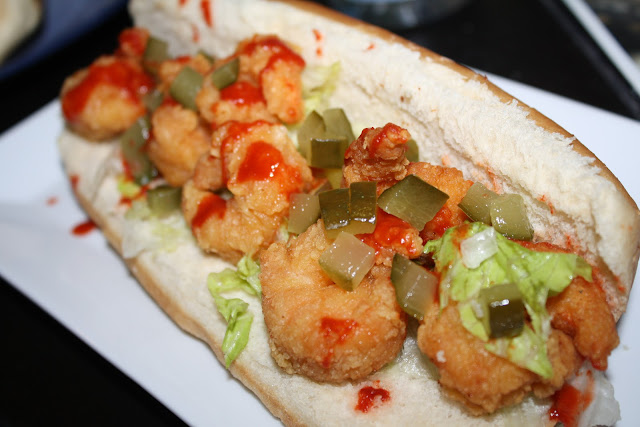 Next, some diced pickles, which I love on any po' boy sandwich. 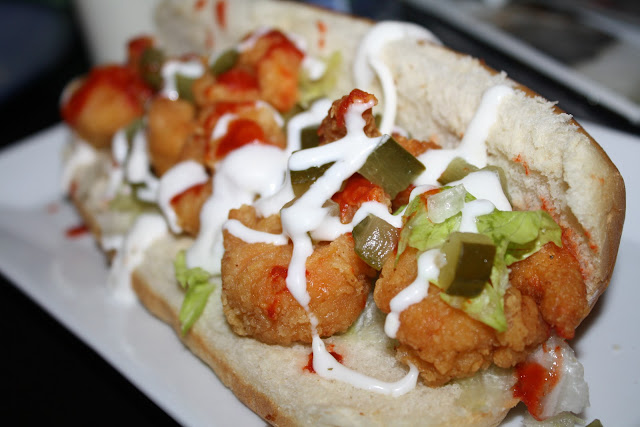 And then a drizzling of Blue Cheese dressing. I know some people prefer ranch with buffalo, but I am all about the blue cheese. (I don't actually like ranch very much. I don't hate it or anything, I just find it quite boring.) 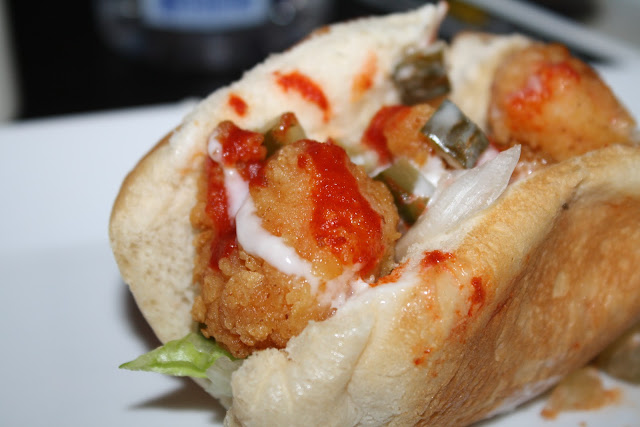 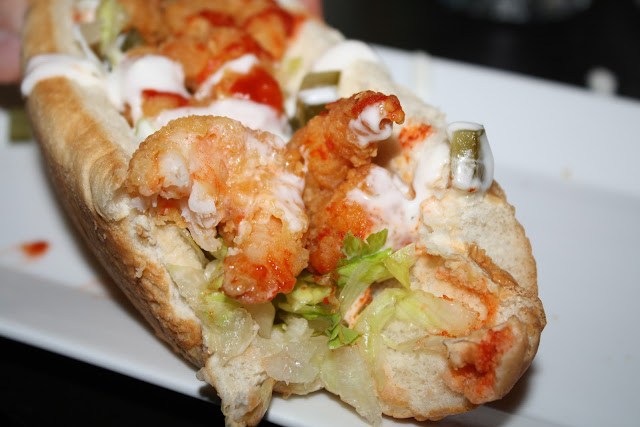 This was one of the best sandwiches I have made in a long time. Crispy, meaty, spicy shrimp, with a slightly-spicy hot sauce, a cooling blue cheese dressing, the tangy vinegar crunch of pickles, and the soft bread and fresh lettuce. I ate the sandwich so quickly I embarrassed myself. Until I realized I didn't really care.
Posted by JustinM at 10:00 AM

Would you recommend the 'GreenPan'?

After "How much do you weigh?" and "Where did you find those Chicken Littles", this is the 3rd most frequently asked question I receive. And the answer is two part. Yes, I absolutely recommend the Green Pan... as long as you are willing to follow the "care & use" instructions that come with the pan. They are very specific. If you're not willing to follow them, save your money and just buy a new $10 pan every year or two.

There are very disparate opinions of the Green Pans. I cannot be sure but I would be willing to bet that many if not most of the negative reviews are from people who neglected to follow the instructions. I have followed them and have not a hand a problem with any of my (5 different) pots and pans over the last 9 months.

I went to Whole Foods at lunch, and made these po boy's after work for dinner. My whole family loves you and told me to tell you that. I used Jalepeno Ranch dressing on ours, and they were great. Thank you! Karee

That makes me really happy.

These look delicious...I'm heading to Whole Foods first thing in the morning!