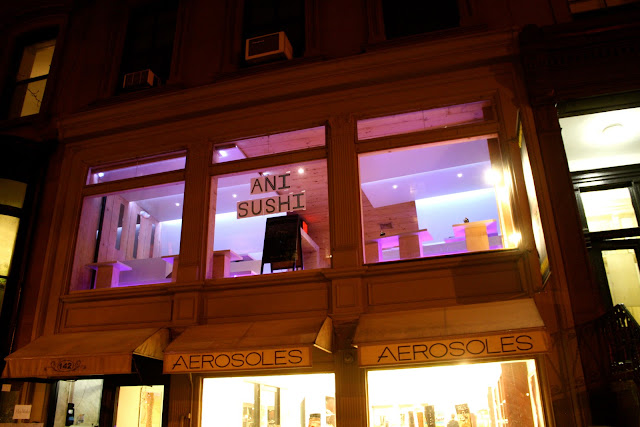 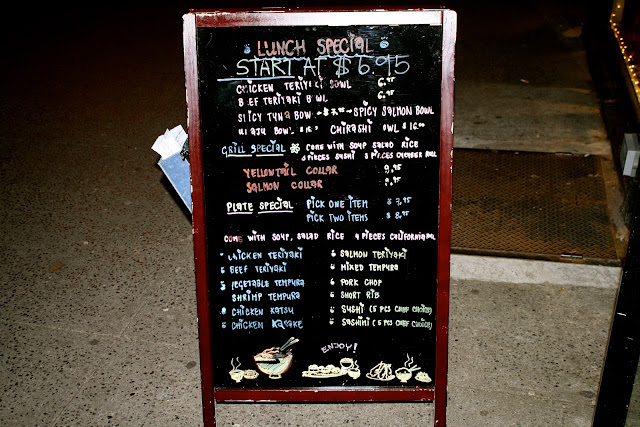 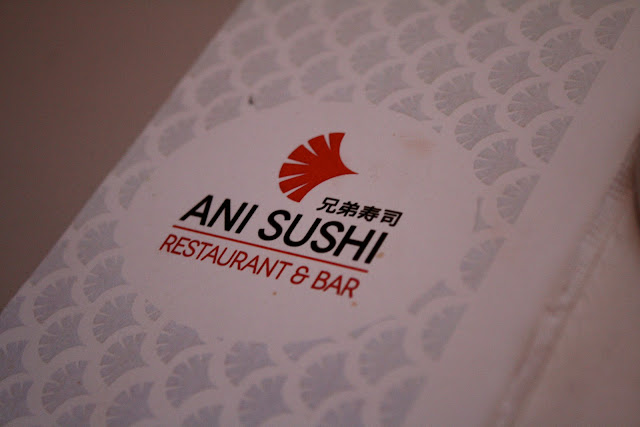 Ani Sushi opened in November, a block away from me. On the second floor of a building on Montague, I'd noticed several times that the place looked full. It seemed popular. So the other night, after Elizabeth and I had gone to Target and returned to our neighborhood very hungry, we were craving sushi. I suggested we try Ani; it was 8:30 and I hoped it wouldn't be too busy.

It turned out only one other table was occupied. 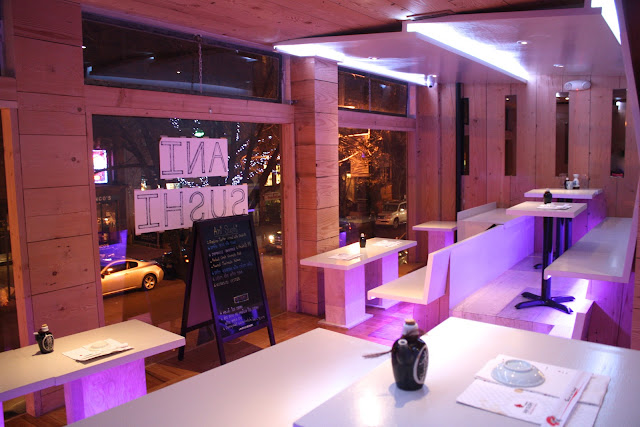 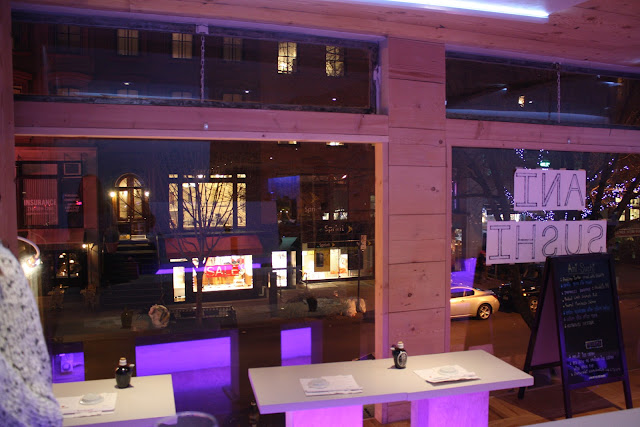 We sat in the room looking out on the street. I loved the way it looks: elevated platforms, sleek white tables, purple-ish lighting. 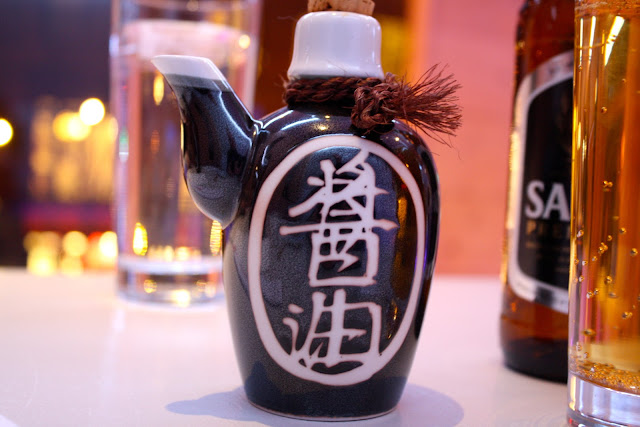 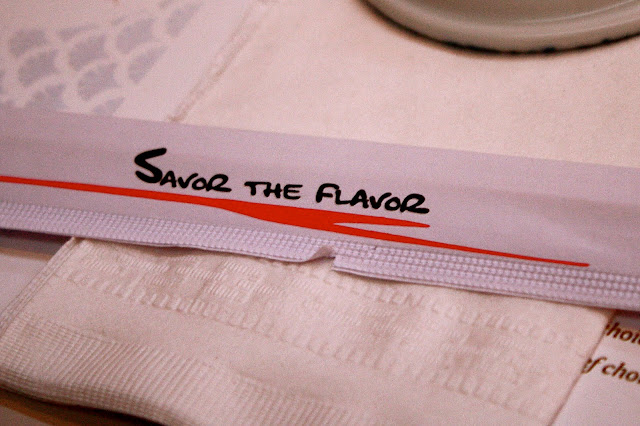 Wanna see some photos of the menu? Okay. 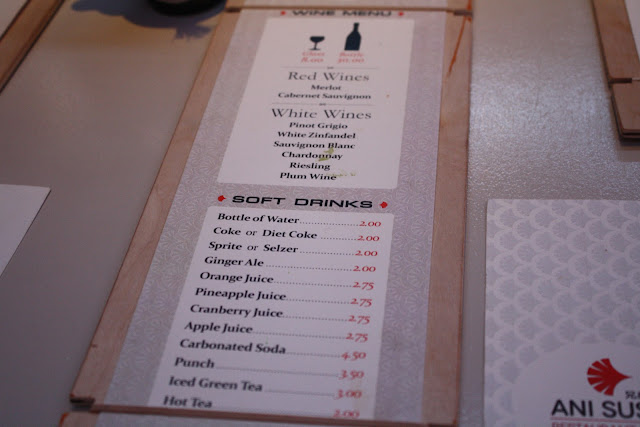 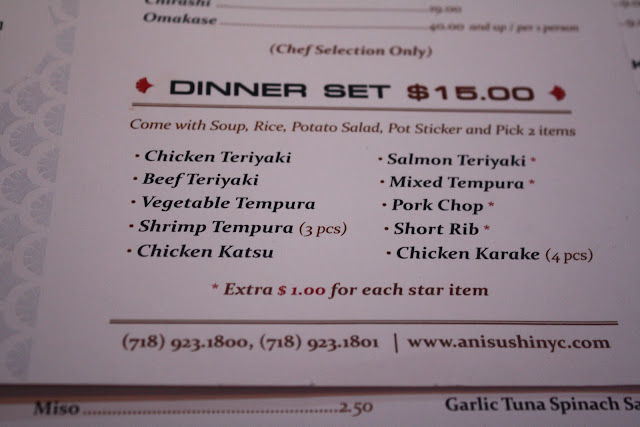 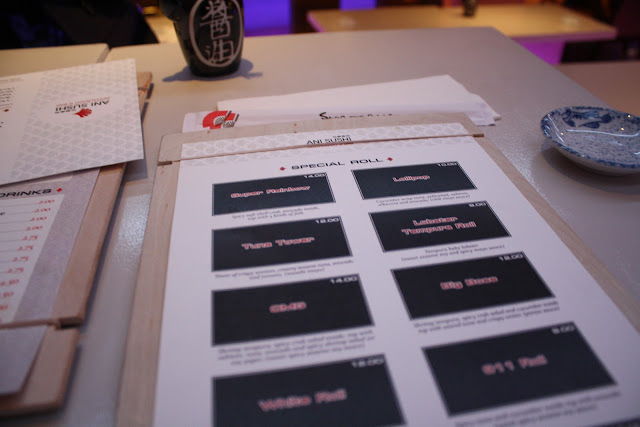 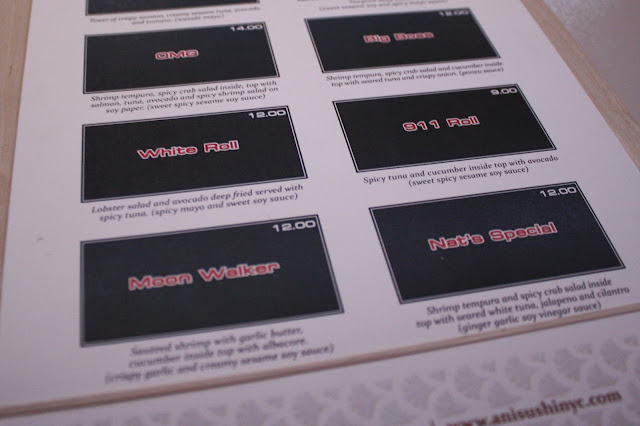 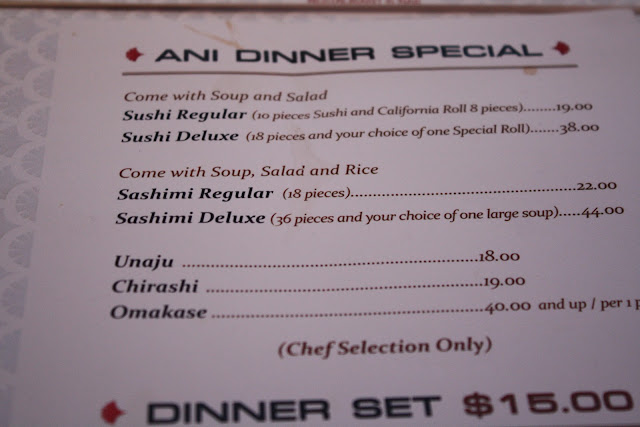 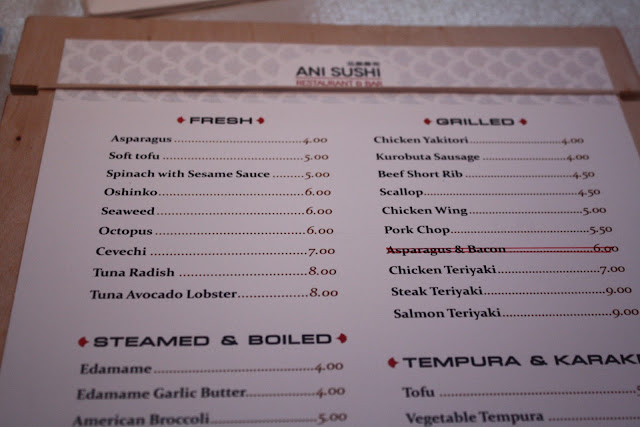 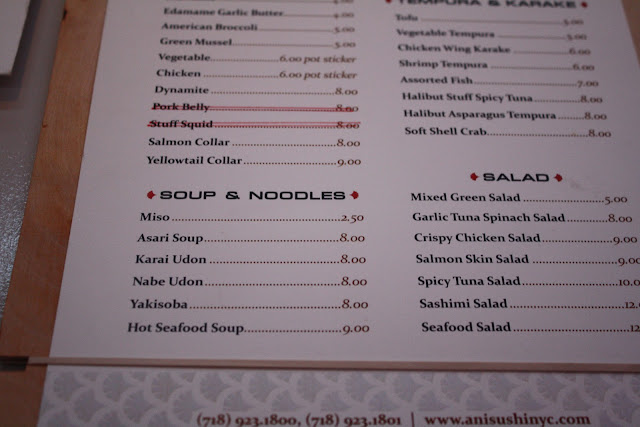 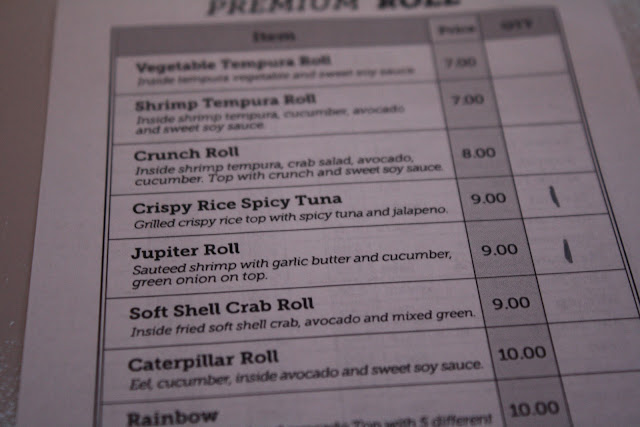 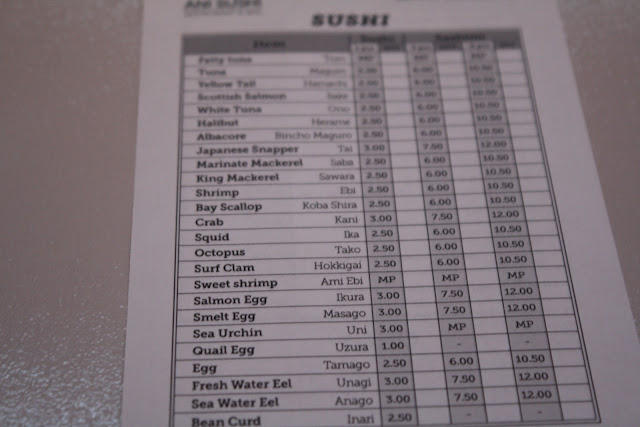 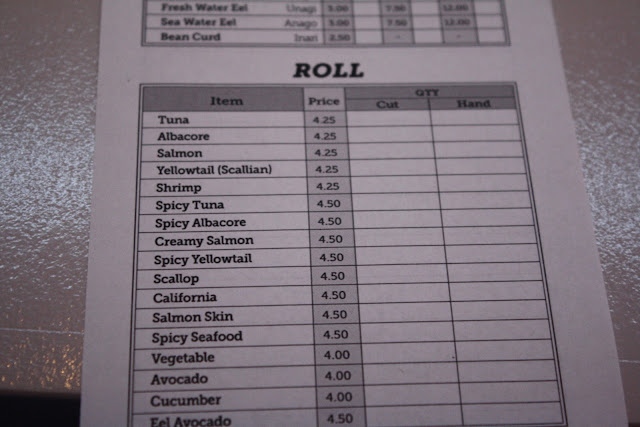 We took several minutes to decide what to order. I was thinking about getting one of the "dinner sets" with tempura and karake, but decided that if I liked the food I would just come back and get those items as a lunch special one day. We settled on three different kinds of sushi, figuring that if we were still hungry we could order more. At the last minute I said I wanted gyoza, too. 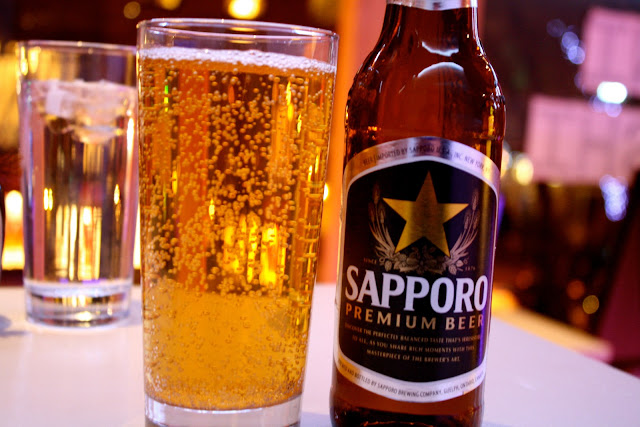 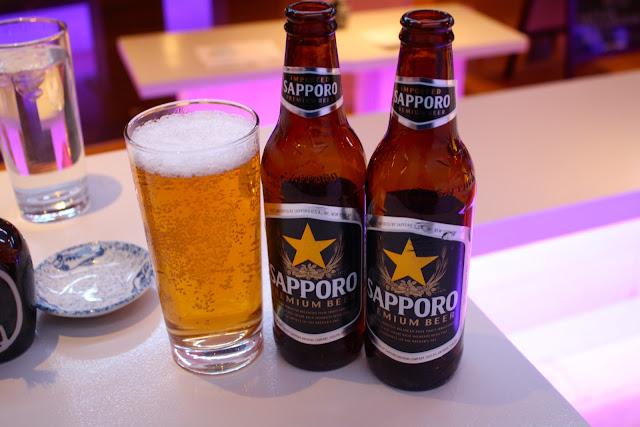 And then I wanted another. 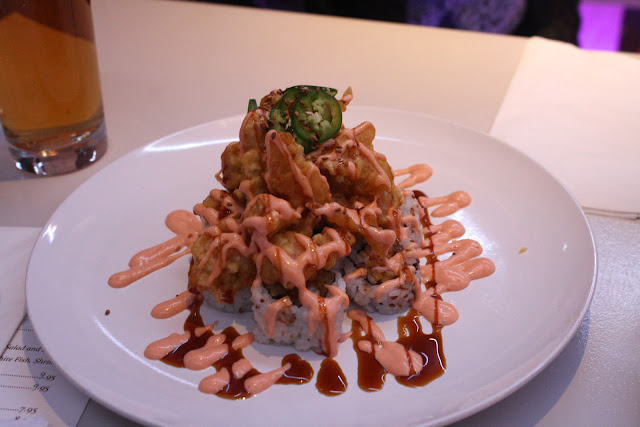 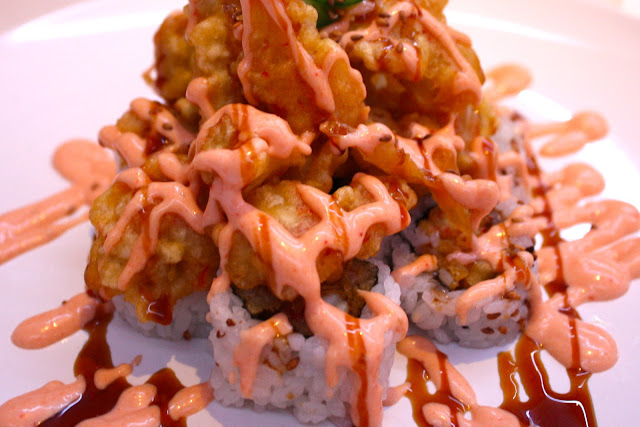 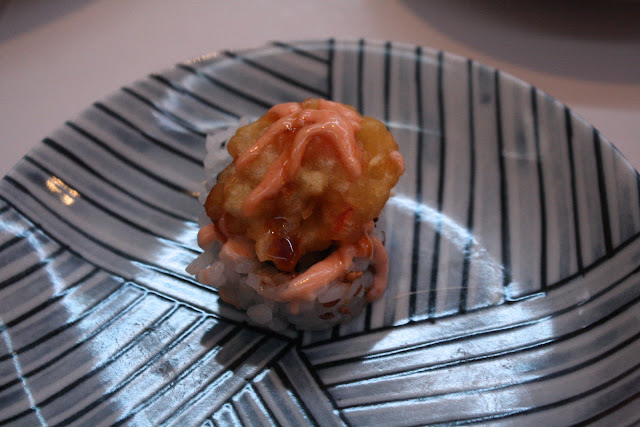 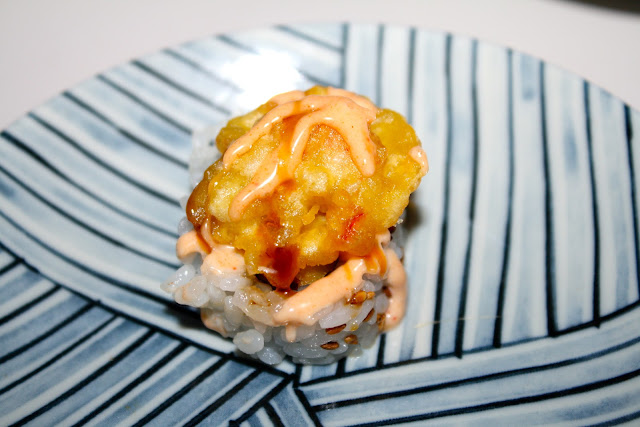 Let's start with the best: the lobster tempura roll was outstanding. We both loved it. Tempura-battered "baby lobster" on top of tuna, with sesame-soy sauce and a spicy mayo (that was actually spicy). I did not like this quite as much as the Fire Snow at B.A.D. Sushi that I wrote about last month, but it was still one of the three best sushi rolls I have had in the last year. 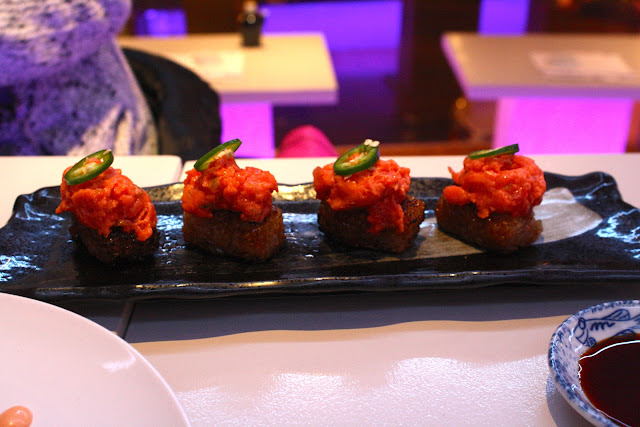 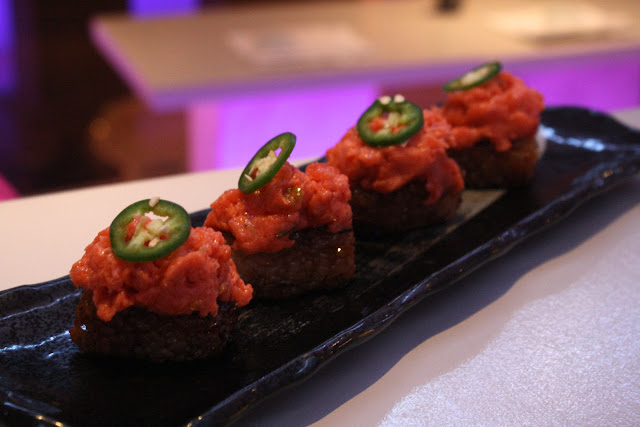 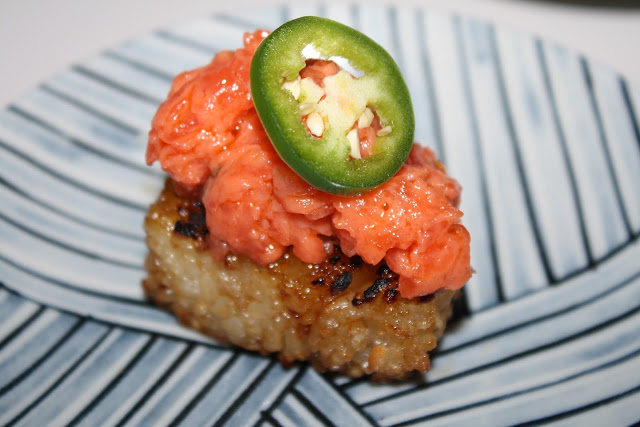 The "Crispy Rice Spicy Tuna" roll was good, too. The crispy rice base tasted like a rice tater tot, topped with decadently fatty tuna and a sliver of jalapeno. When the plate was done, I wasn't left wanting more - like I was with the tempura lobster roll - but I enjoyed these. 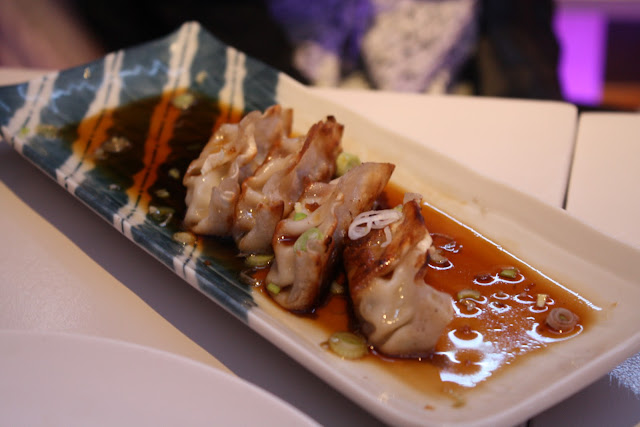 Someone snagged a gyoza before I could take a picture of the plate. The gyoza were fine. Nothing special and no different from scores I have had before at dozens of Japanese restaurants, but still pleasing. The sauce was the highlight: a touch sweet with plenty of vinegar to it. Often these kind of sauces are dominantly soy and thus a bit too salty for me, but this one was great. 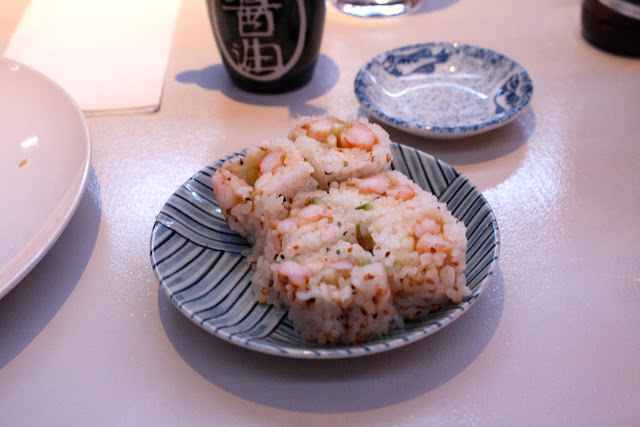 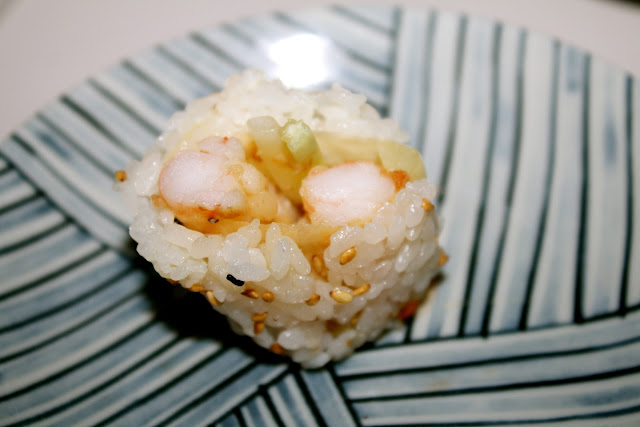 The Jupiter Roll: sauteed shrimp with garlic butter, cucumbers and green onion. I'm not sure how I feel about this one. The flavor was good, no question. Very light with the unmistakable kiss of garlic butter. But something just seemed missing. Maybe I was expecting more shrimp in each bite. Maybe I was getting frustrated at the way every roll fell apart. Or maybe I just found it silly that this cost the same amount ($9) as the tempura lobster roll, which was much larger and much better. At any rate, I liked this just fine, but I won't be ordering it again.

The waitress came to check up on us and saw that we had finished everything. "Wow, you ate that fast," she said with a look of astonishment on her face.

I definitely enjoyed my meal at Ani Sushi. But if not for that tempura lobster roll, I would not return. Within three blocks of me are Iron Chef House, which I love, Nanatori, which I really like, Tenda, which was good, and Ozu, which I did not really like. And there is still another place I have not yet tried. (And this is just within three blocks; if I expand the radius to ten blocks, there are at least a dozen more places I have yet to try.)

I could see myself returning to Ani, but I could also see myself never stepping foot in there again. I loved the tempura lobster roll but I merely liked everything else.
Posted by JustinM at 10:04 AM

Yeah - shopping at Target will drive a person to drink.
I dig the "bleacher" style seats. Everybody has a street view through the big windows. Cool.

Okay that lobster mayo thing looks really good, like make the trip to bk from manhattan good! Usually when I'm in bk it's for some amazing pizza, so this would be different.