Farmer in the Deli 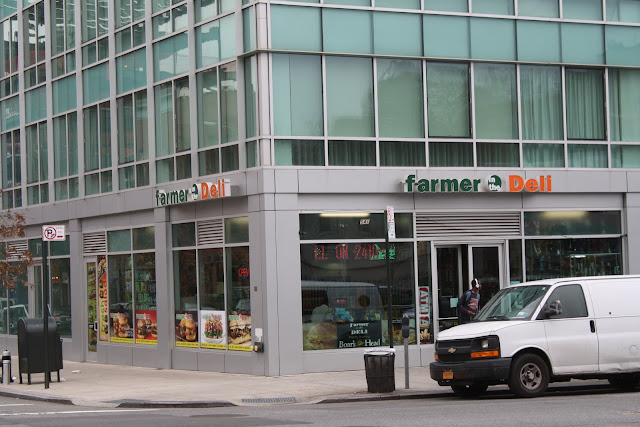 I was doing something in Brooklyn one day, the details are not too important, and at lunch time there were 11 of us in need of food. I volunteered to go pick up sandwiches. After looking on the ipad, Farmer in the Deli appeared to have good reviews. I brought up a menu, showed it to everyone, and wrote down their orders.

When I got there, the man behind the counter didn't like the way my order was written down and asked (actually ordered) me to do it differently. (Well, first he yelled "Why you no call first?" But when I said "Okay, I'll just go to Subway," he agreed to help me.)

I am not sure why he needed me to write down the order in a different fashion: only three of the eleven were made correctly. (One of the guys for whom I picked up a sandwich had been here before. "Oh, that place?" he said. "It doesn't matter what you say, they make the sandwiches however they feel.")

Three people wanted wraps but they only had one tortilla in the deli, so two of them had to settle for sandwiches. And there are other anecdotes I could share about the level of customer service, but you get the point. 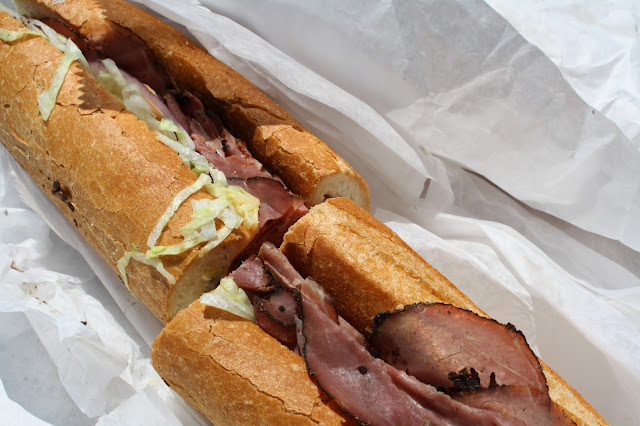 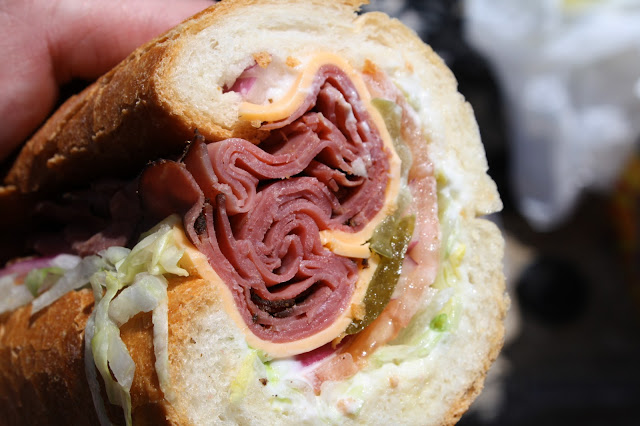 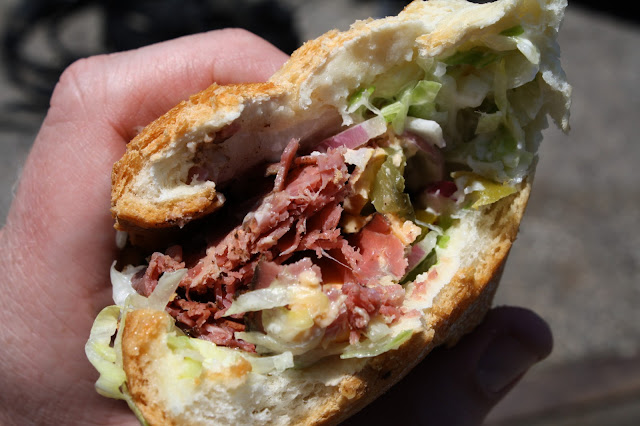 I had a pastrami hero with cheese, lettuce, pickles, mayo and mustard. And you know what? It was damn good. The ingredients were all Boar's Head and the roll was fresh. I also took a couple of bites of my brother's buffalo chicken sandwich because, despite the fact that I had written "chicken and cheese only," they had slathered mayo all over it, and my brother hates mayo. But I like mayo, and I thought his sandwich was good too.

The total for all 11 sandwiches was $54, one of the better deals I have found in the last year. I don't see any reason why I would ever return to Farmer in the Deli - there are plenty of delis around with Boar's Head ingredients and I imagine some have comparable prices - but if I have to, that would be okay. It's an adventure ordering, but at least the product is very good.
Posted by JustinM at 9:30 AM

Do I spy a tomato in that second shot of your sammy?

You do, my friend. Mine was one of the 8 sandwiches that was made incorrectly. Though there was a time when I would have refused to eat such a sandwich (and by "time," I mean until I was about 20), I have no problem just pulling them off these days.

LOL @ "I was doing something in Brooklyn one day, the details are not too important" SHADY!

Justin, you were copping some weed, don't lie lol! At least that would justify your insane munchie tolerance and the fact you were high as hell and ordered everyone's sandwich wrong (ehh, unless all those sandwiches were for you, your bro and wife after blazing a few blunts!) deny it all you want, but you just became cooler in my book. Now I know why you go to trader joes and buy the most random munchies, you smoke before you go and can't make up your mind. NYC got that sour, but obv Cali has better stuff with the medical dispensaries and all, still don't sleep on that NYC sour diesel. You should be able to find some in Brooklyn pretty easily, if not go to Washington heights.

Actually the two people with whom I interacted the most that day were a CHP sergeant and an NYPD officer. So no weed.