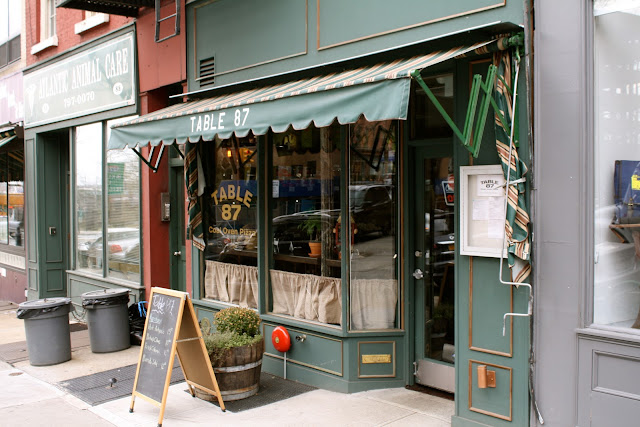 After I wrote about Fascati and Monty's Q last week, a reader sent me an email suggesting I try Table 87 for a slice. It's only five blocks away, down on Atlantic. I was aware of the place - I've walked by it dozens of times - and I knew that it had opened last summer, but I did not realize they sell pizza by the slice. (I thought it was a sit-down restaurant.)

Trying a slice of pizza is never a problem, so I headed down there a few days ago in the mid-afternoon. 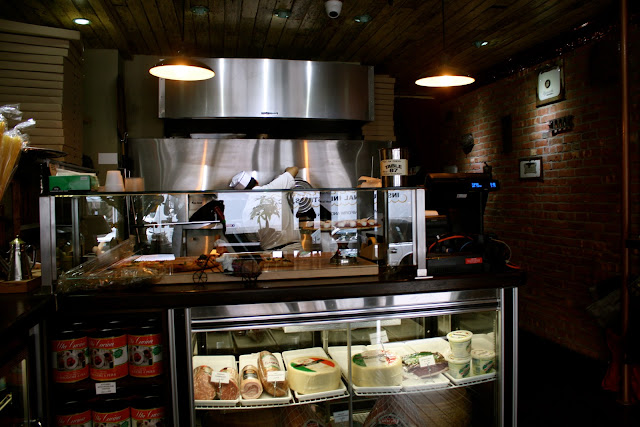 It was about 2PM and no one else was in the restaurant. The man working behind the counter said hello and I noticed a Margherita pizza sitting on the counter. "I will try a slice of that," I said. He slid it into the oven, I paid ($3.75) and took a seat in the window. 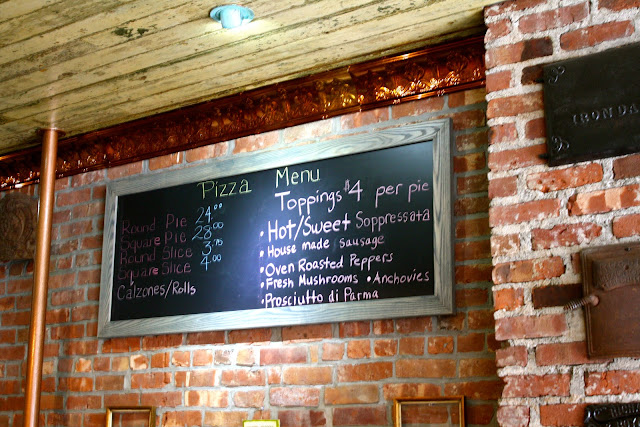 The menu is written on a chalkboard and I snagged a paper menu, too. 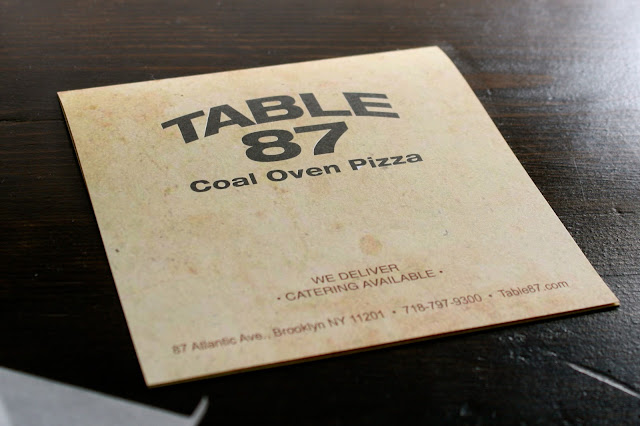 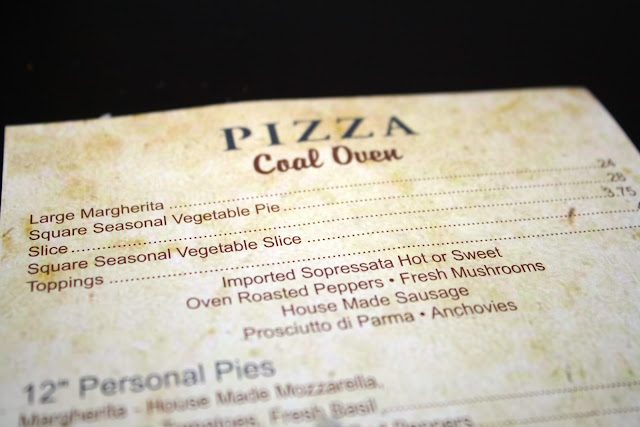 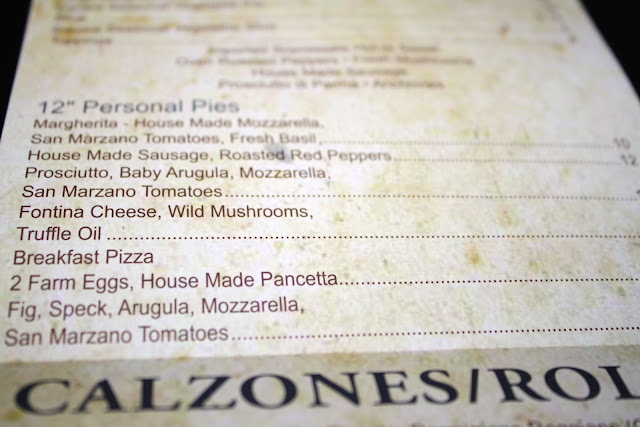 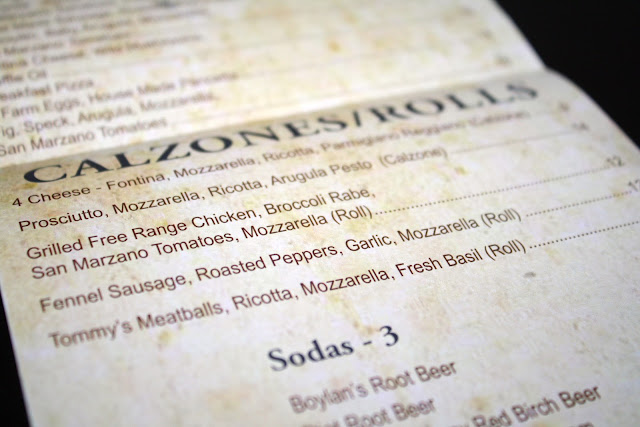 $24 for a Margherita pie seems high (and that's without getting any additional $4 toppings), though I must point out that if it's the size of the one sitting on the counter, it's quite large. Unless I was very hungry, there is no way Elizabeth and I could finish a whole pizza in one sitting. 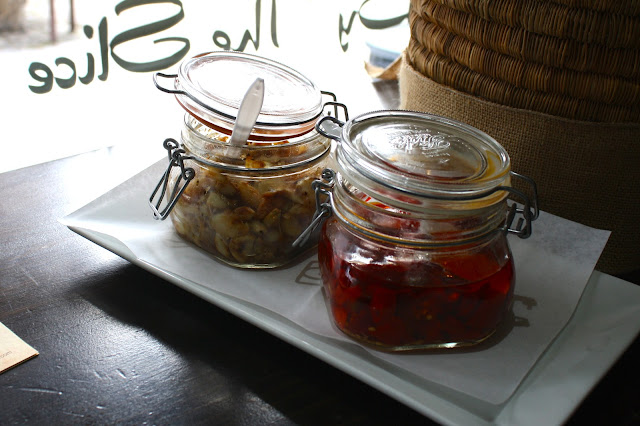 You have to love a place that sets out containers of roasted garlic and spicy peppers for you to use. 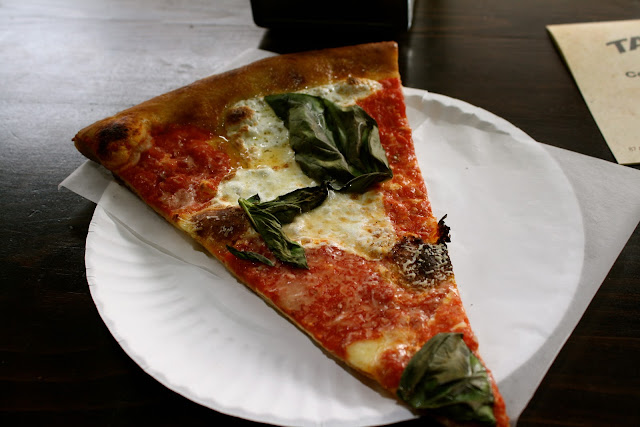 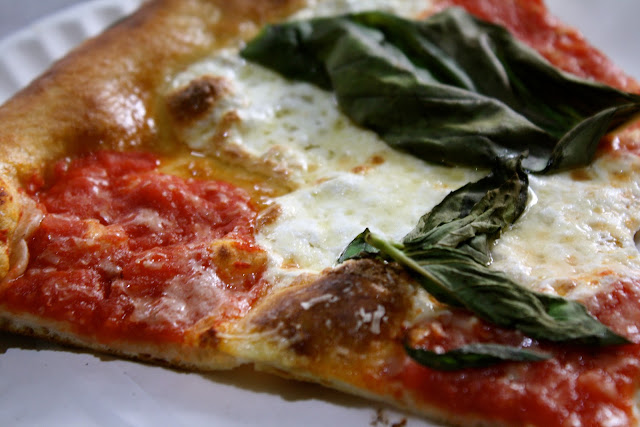 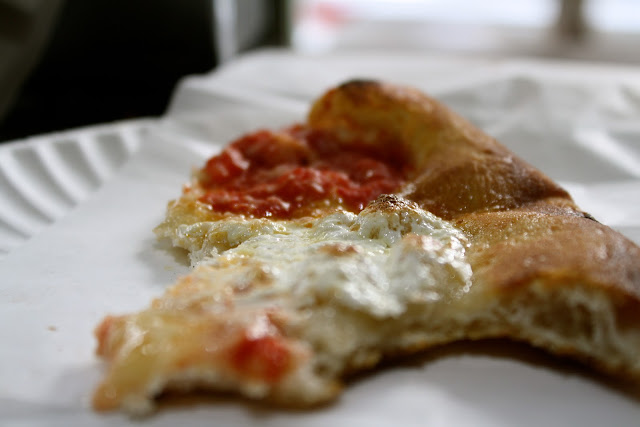 In August of 2006 I caught my first game at Yankee Stadium, the Angels beat the Yankees, and six of us took the subway back to Manhattan and went to Totonno's for pizza. We had four different pies and they were the best I have ever had in my life.

This slice of Margherita at Table 87 reminded me very much of that pizza. I'm not saying it was quite as good - it wasn't - but it was still great: it had the same sweet tomato sauce, high-quality cheese and fresh basil. The crust was wonderful: just pliable enough to fold if you want, but strong enough to hold all the toppings if, like me, you prefer not to fold your slice.

Unlike another place I wrote about last week, the employee at Table 87 was very friendly. He asked me how the slice was when I was halfway done and seemed genuinely happy when I told him it was delicious. I thanked him when I threw away my paper plate and he responded by saying "Thank you sir, have a nice day."

Table 87 probably won't become my go-to place when I want to get a whole pie, but I will absolutely be stopping back in when I want a slice or two.
Posted by JustinM at 9:00 AM

He must not be from New York.

Is their any reheating of a single slice? I've always wondered how places can serve really good, neapolitan or coal fired slices given the logistics of producing the whole pie.

Hi Adam. Yes, single slices are always reheated, although sometimes I request that they not be (if I'm taking them to go) and I go home and do it myself.

Do you have photos of Totonno's? I'm curious how good it was if it was better than this - because this looks awesome.

Hi Michelle. Here's the deal: yes, I do have a couple of pictures of Totonno's - this was 2006, before there was a blog but after I had started taking photos of all my food on vacation. (That habit started with the Memphis in May trip in 2005.) But it was three cameras ago, so they're not as good as these pics. And that particular Totonno's is closed now.

But if you and other people are interested, I will still do a short post on Totonno's

I really want to see those Totonno's pictures!!