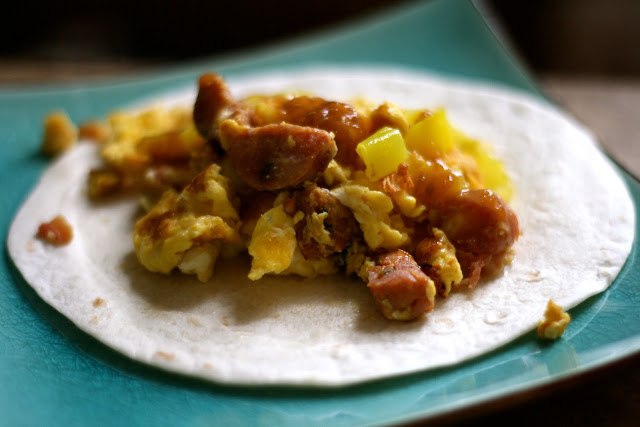 I've never been a big breakfast fan. Breakfast foods aren't my favorite, and at any rate I've just never been too hungry in the mornings. I always preferred a cup of coffee (or several cans of Pepsi Max) and then an early lunch. But so far in 2013 I've been sticking to a decent workout routine in the mornings (the fact that it's almost February and I'm still at it definitely makes it one of my more successful New Year's resolutions) so I've been eating breakfast a lot more. I've easily had more breakfasts in the 30 days of 2013 than I did in the 366 days of 2012.

Monday night I was watching The Layover and Bourdain was in New Orleans. He finished the episode at a taco truck, where one of the offerings was a breakfast taco called "Woke Up In Oaxaca," with eggs, chorizo and cheese. Damn that sounds good, I thought. It was close to midnight but I still considered making one. Tomorrow, tomorrow.

I had eggs and tortillas but no chorizo, so yesterday morning I made sure a stop at Paisanos was near the end of my walk. I picked up some Columbian chorizo. 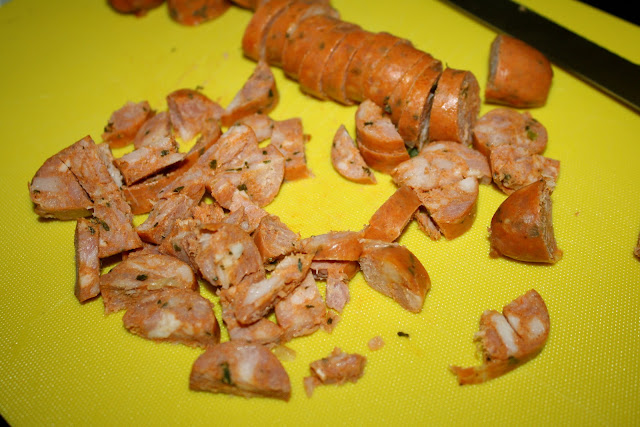 I diced it up and heated it in a pan for a couple of minutes. 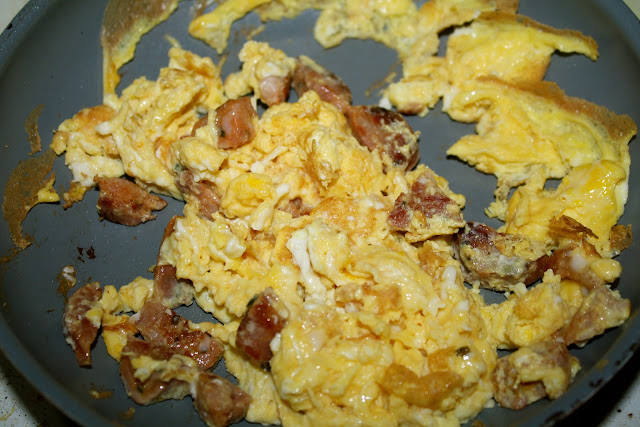 And then scrambled two eggs with it.

I had been thinking about what kind of cheese I wanted, contemplating stopping into a market and getting some cotija, but then I had another idea. 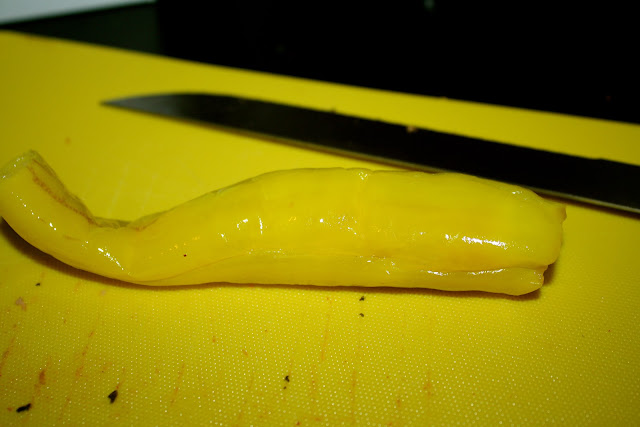 Remember those finger peppers from Paisanos stuffed with prosciutto and cheese? 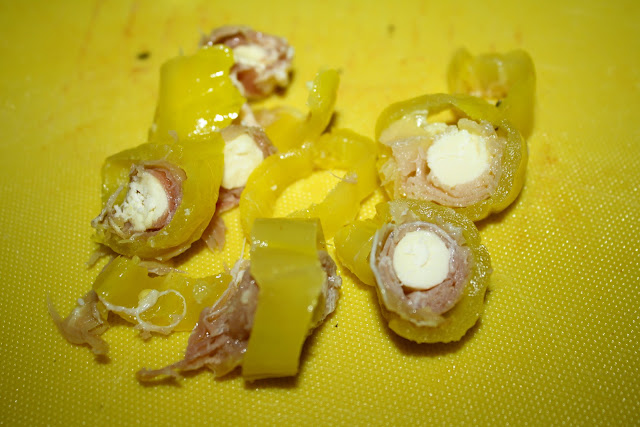 I sliced them up and added them to the pan, too. 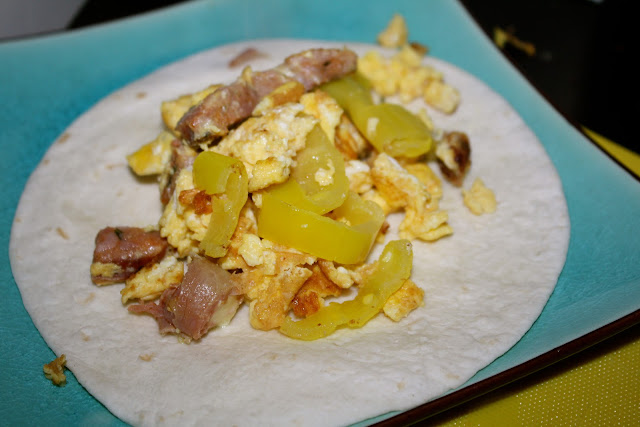 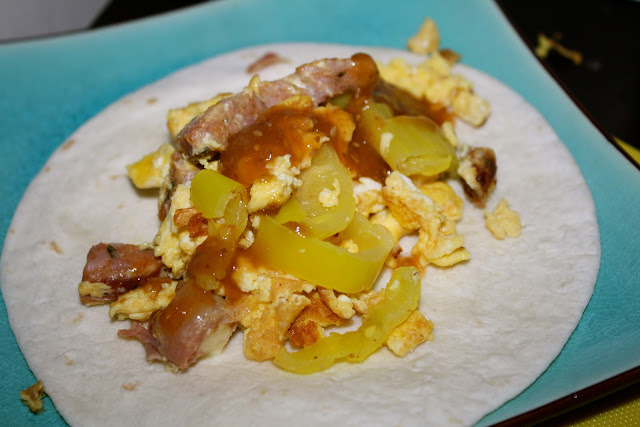 A spooning of Brooklyn Salsa Company's "The Green" salsa, made with tomatillo, mango and lime.

Now this is the kind of breakfast I like. 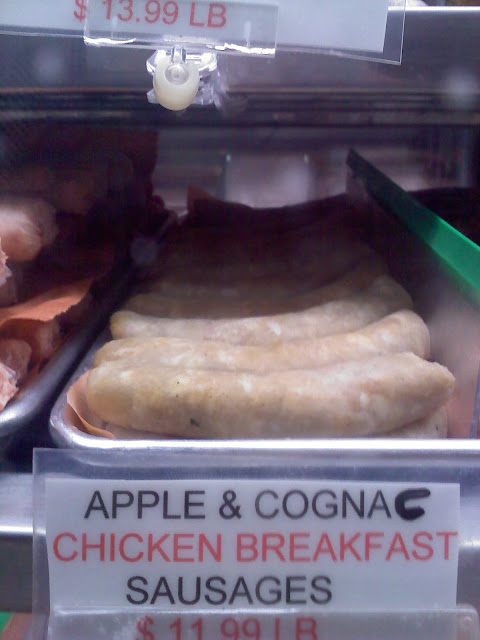 Over the weekend I spotted these breakfast sausages at Paisanos as well. You gotta love the concept of adding fruit and booze to sausage, right?

I broke apart a few links and cooked them in the pan as well, with scrambled eggs. 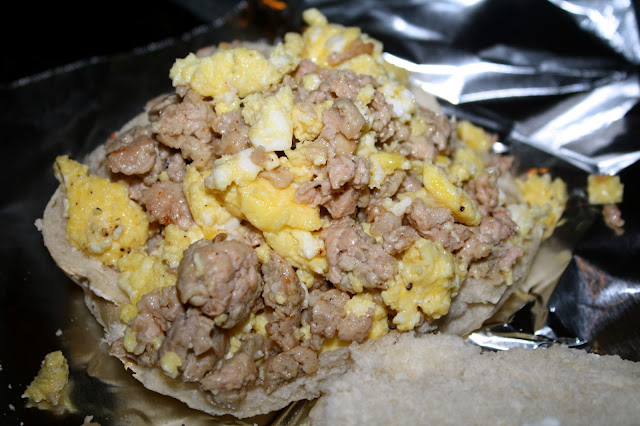 Then placed it all on a white Kaiser roll. 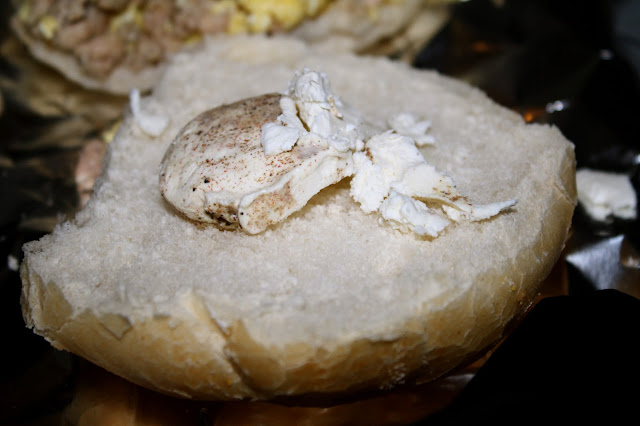 With a dollop of "four pepper" goat cheese.

I wrapped the thing in foil and placed in the panini press. Why wrapped in foil? Well, there is nothing in my kitchen that has been as neglected since we moved to Brooklyn as the panini press. It looked like it needs a cleaning. But I was too hungry to do it then. So I encased the sandwich in foil before pressing it. 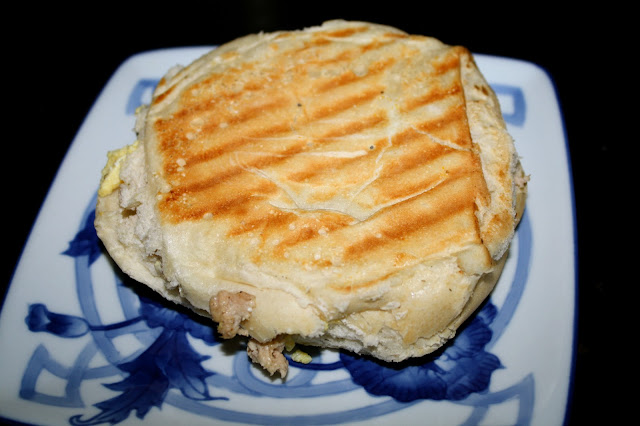 I'd forgotten just how much I love the look and texture of a pressed sandwich. 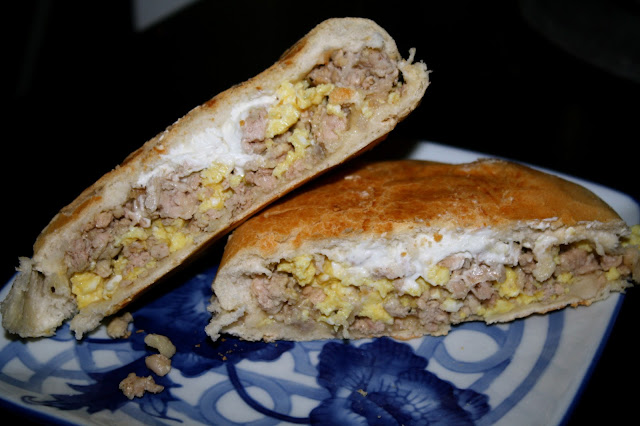 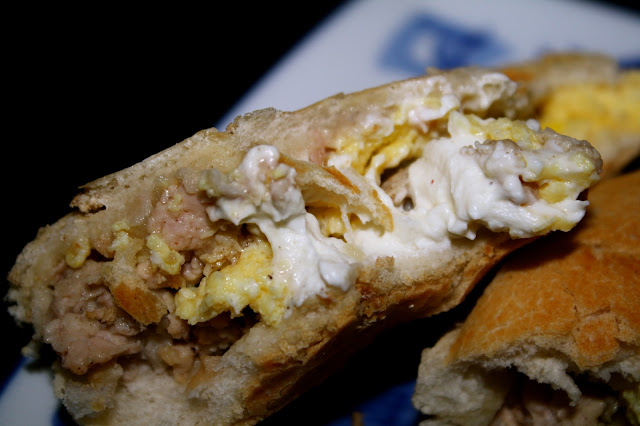 This wasn't quite as good as the taco, but damn was it good. The cognac flavor was noticeable in the sausage and the goeey goat cheese held the components of the sandwich in place, to say nothing of tasting great. The Kaiser roll was perfect when grilled - it firmed up to provide a nice contrast to the eggs and cheese but still retained its airiness.

I should start experimenting with breakfast foods more.
Posted by JustinM at 10:00 AM

Those both look fantastic.
We make a chorizo hash a lot, with potatoes, chorizo, eggs and whatever else I throw in. It's very tasty.

love how they wrote in the C next to cogna

Those stuffed finger peppers look good! Throwing them in the taco was inspired.