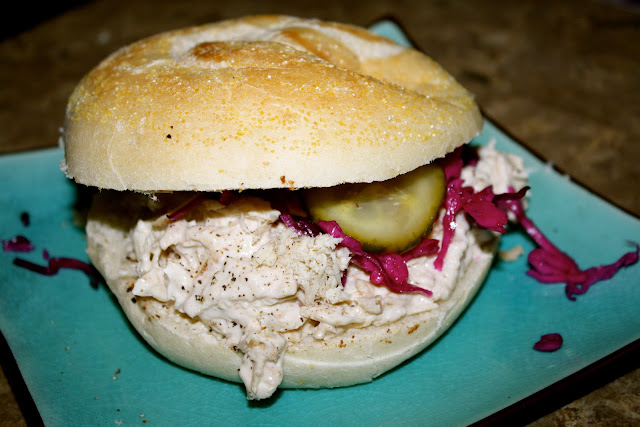 When I wrote about the Carolina barbecue sauces the other day, I mentioned a book I purchased in Memphis years ago: Peace, Love, & Barbecue. The book has several recipes for barbecue sauces, including one that I had not heard of before: an Alabama white sauce, made famous by Big Bob Gibson's Bar-B-Q. Apparently the sauce is only found in northern Alabama. (I've driven through northern Alabama - I once passed by a tornado just outside Birmingham - but I've never stopped anywhere for barbecue.) It sounded good so I made it and loved it.

I haven't made any in years, but decided to give it a try the other night. 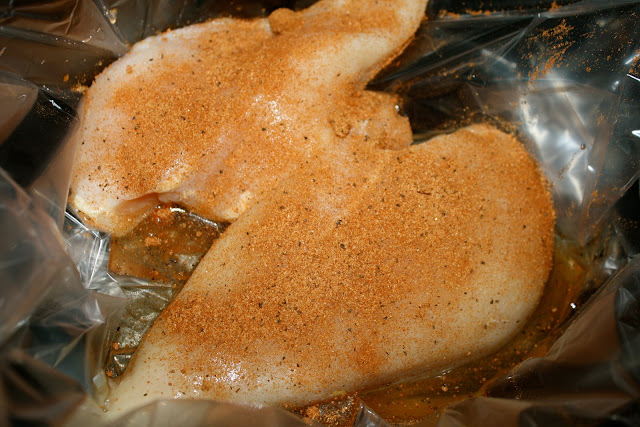 I rubbed two chicken breasts with poultry rub and placed them in the slow cooker with some apple juice. I left them there on low for five hours. 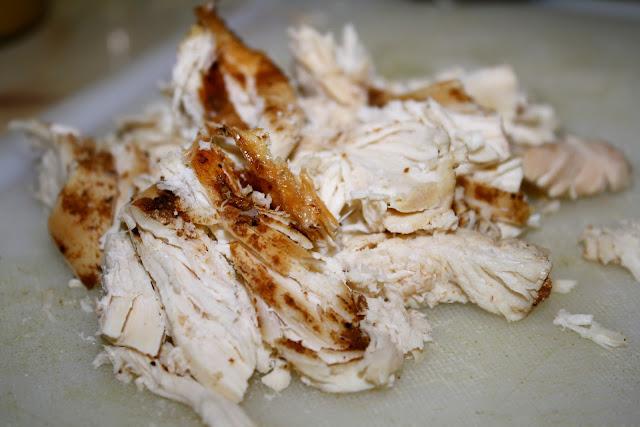 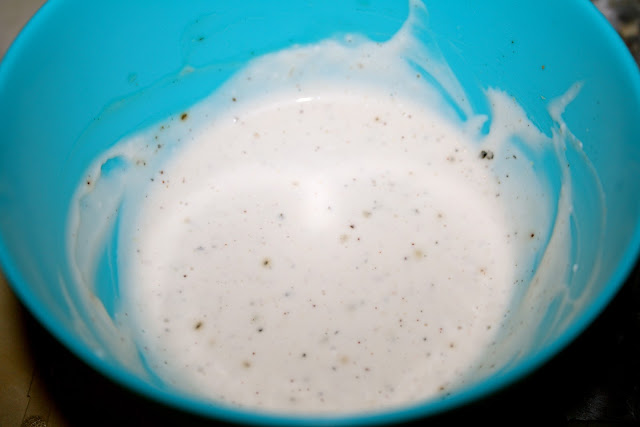 The sauce recipe is easily found online - Big Bob Gibson shared it freely with people. The main ingredients are mayonnaise, vinegar, lemon juice and cracked black pepper. It has the sweetness of mayo (and a bit of added sugar) but the tang of the vinegar and lemon is very noticeable, as is the black pepper. 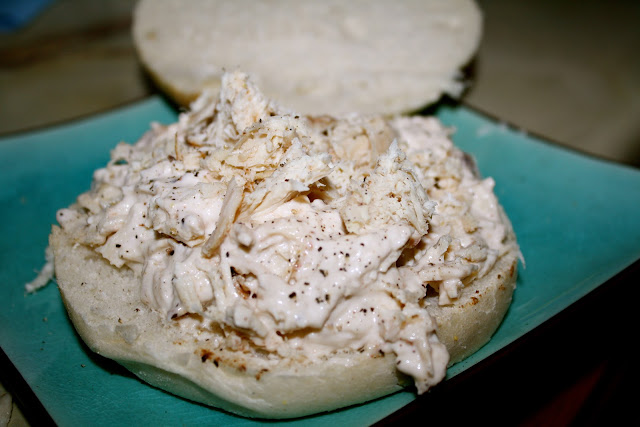 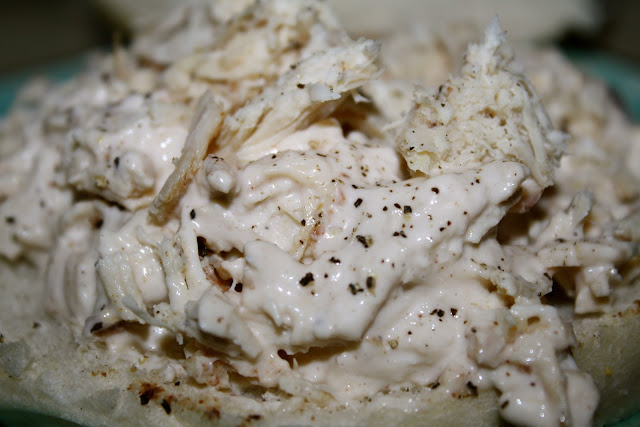 I tossed half the chicken pieces in the bowl of sauce and left half of them without sauce. I placed both on a soft Kaiser roll. 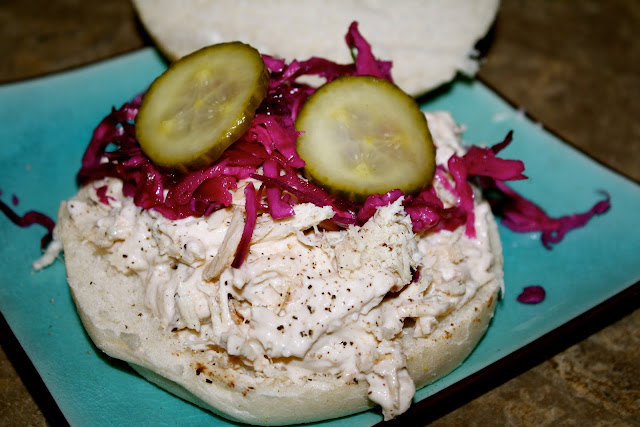 I added some red cabbage slaw and my last two homemade pickles. 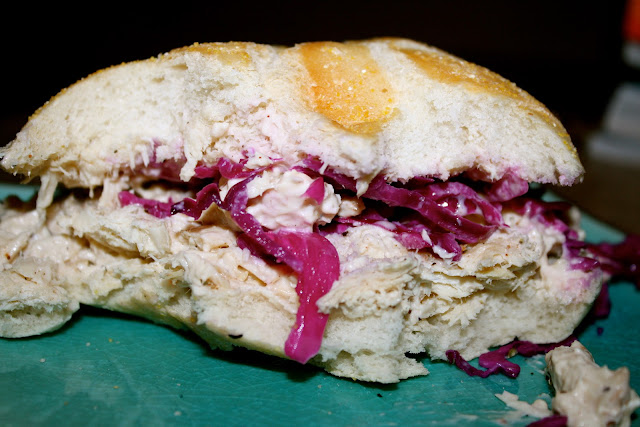 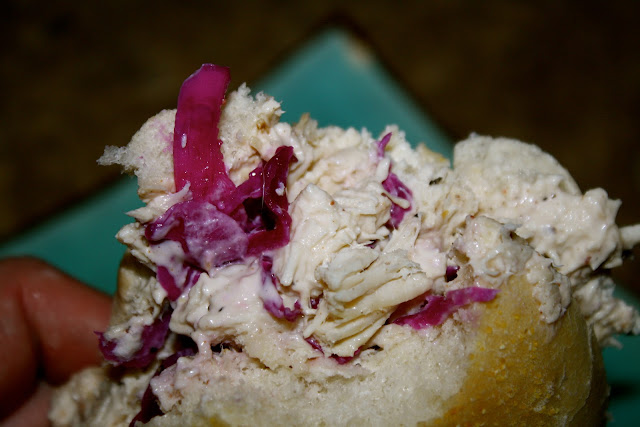 This was a delicious sandwich. I will not be letting another few years go by before I make this sauce again.
Posted by JustinM at 9:00 AM

I love your blog, and I'm originally from Alabama. I'm glad you pointed out that the white sauce is only found in Northern Alabama, because little, if any BBQ joints in Alabama use this other than Big Bob Gibson's. Somehow, the whole state often gets lumped into the "white sauce". Real Alabama BBQ Sauce is usually almost a nice hybrid of Carolina and Memphis. If you are ever in the Birmingham area again, I recommend Golden Rule BBQ or Dreamland. Both excellent, but you can find fantastic BBQ all over Alabama. I just wish I could find some decent BBQ here in Florida where I live now.

Great info, Deano, thanks. I have known about Dreamland for a long time but never been. I would love to make it there one day.

I love the name "Alabama White Sauce" although when I think about it again, it sounds racists! Anyway, this sandwich looks gooooooood. Nice work!

Hey Deano, White Sauce is a real Alabama BBQ Sauce, its just not a Real Alabama TOMATO based BBQ Sauce...

Great Blog Justin, keep it up

Hi Neil, it's a pleasure to hear from you. I saw you on Travel Channel the other day. I hope I get a chance to try your 'cue one day.