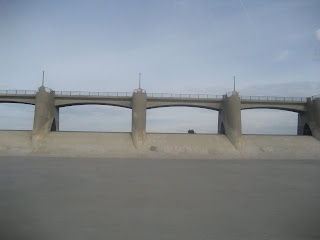 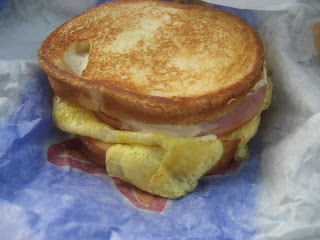 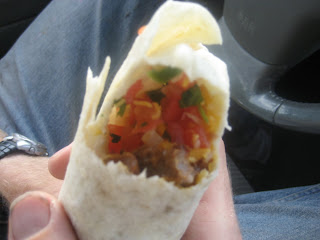 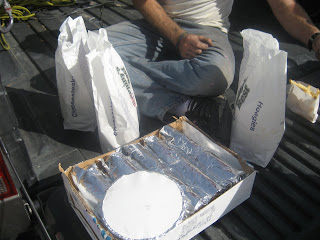 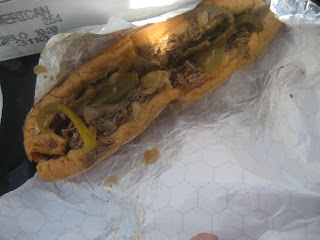 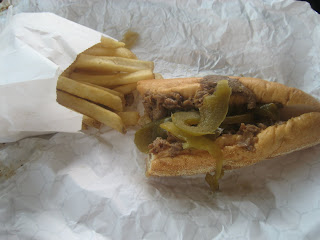 My brother and his buddies sometimes do work for a reality TV show (they are experts at using rope and this particular show creates physical challenges that often utilize rope.) The other day my brother was building a set at Sepulveda Dam and asked if I would help out, which sounded like fun to me.
-
We stopped at Carl's Jr. for breakfast. My brother swore to me that their steak and egg breakfast burritos are awesome. I took one look at the picture on the menu display and decided there was no way I could order something like that. (He ordered it without egg, which made me laugh.) I took one bite of his anyway. It was not good.
-
But neither was my sourdough breakfast sandwich. I certainly was not expecting it to be as good as something homemade, but I was not prepared for just how bad it would be. So the lesson is: don't eat breakfast at Carl's Jr. It really tests my idea of every meal of every day being its own party.
-
It was a nice day at the dam, however, and I worked up quite an appetite hauling around trusses, unwinding rope, and trying to drive a golf cart up the spillway (I could only get it about ten feet.) At lunchtime some of the production crew on the show surprised us with a HUGE box of sandwiches from Philly's Best. I have never had one, but I have several friends who love their sandwiches.
-
The sandwich I grabbed had steak and American cheese. It was absolutely fantastic. Was it better because I had spent hours sweating and I was hungry? Maybe, but maybe not. The steak was tender, there was the perfect amount of cheese, and the handful of peppers I added were great. Even the fries, which had been sitting in a bag in the back of a truck for perhaps half an hour before I took a break to eat, were still good.
-
I will be visiting Philly's Best again in the next couple weeks to try another one of their sandwiches.
Posted by JustinM at 12:34 PM

typo: without should be with

I don't follow. The only place I wrote "without" is in the second paragrah.

Cheese Whiz is THE most underappreciated food item of all time... think about all the things it makes better/palatable:
Philly's Best Steak Sammie - without the CW it's merely good... with - lovely.
Brussel Sprouts - CW is the only reason that I was ever able to finish veggies like this as a kid, and hence leave the dinner table... my pop had some draconian rules about finishing meals and being allowed to leave the table (read "leave the table and get ready for bed")... not to digress too much, but I can still clearly recall the "liver incident" on one fateful night when, with all the balls a 6 year old can manage, I challenged dear old dad and declared I wouldn't be finishing the horrid liver that sat on my plate... long story short, I finished the last piece of liver at approximately 1am while my male parent finished off another Olympia and Johnny Carson signed off for the night...
In any event my mom never made liver again for dinner and I learned that 6 year olds don't make the rules (unless you're that kid from the TV show Webster who was no doubt the main breadwinner in his familia)...
Either way, Cheese Whiz is great and probably saved me from years of therapy caused by not being allowed to leave the dinner table...