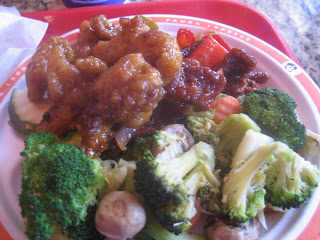 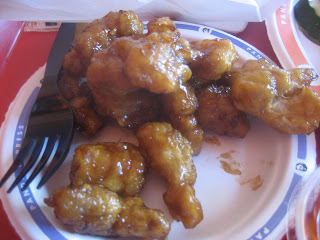 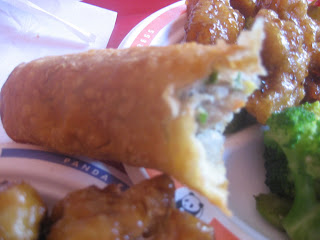 Sometimes you have to love karma. Like when, say, a former athlete kills his ex wife and somehow gets away with it, but then gets sent to jail years later for trying to take back his own stuff. Or, perhaps, when a dislikable football team with an obnoxious fan base cheats, gets caught, and then runs up the score on inferior teams all season long (and gets upset monumentally in the Super Bowl and their classless, asshole coach leaves the field early) and in the first game of the next season their star quarterback gets knocked out for the rest of the season. But sometimes good karma can come your way, too.

The other day I was in the Vons parking lot and an older lady was loading groceries into the trunk of her car. She had two 2.5 gallon containers of Arrowhead water in her cart. I asked her if she wanted me to load them into the trunk for her. She seemed very pleased by that and thanked me several times.

I was starving and short on time so I just went across the street to Panda Express. I am not a huge fan of it, but it was close. I went in and started to order and who should end up right next to me in line but that lady. She said to the girl behind the counter "I am going to pay for this young man's lunch." I thanked her and told her that wasn't necessary, but she insisted. (Both my grandmothers are dead now, but I certainly remember when they were alive there was nothing in the world that made them happier than buying me food. So I agreed.)

She told me to make sure I got plenty of food, so I ordered a three item combo of orange chicken (two orders) and Beijing beef, and also an egg roll. The Beijing beef was fresh and I enjoyed that, but the orange chicken tasted like it had been sitting out for a while. The egg roll was just average.

It was an okay meal. I don't think Panda can compare to Pick Up Stix, but, like I said, I was in a hurry and it was close by. Plus I made a new friend. We're going out for drinks next week. (Only kidding.)

Re: that football team, you left out the team's star QB playing like Daunte Culpepper after his identical injury and getting cut from the team, and its director of player personnel leaving for a quintuple pay raise from Kansas City, and everyone realizing that those two were responsible for the success in the cheating years, and the team settling into a perpetual 5-11 fugue while the Steelers win 4 more and then 1 for the other thumb. But then the fans of the football team would remember that they didn't know football was a competitive sport before 2003, and they'd turn to obsessing over a basketball player with the emotional development of a 5-year-old. Some Minnesota guy named Garnett.

Sorry, was this about food?

Nick (from Boston (via Pittsburgh))