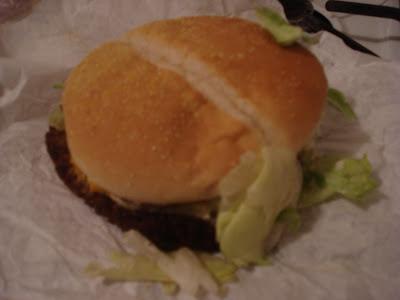 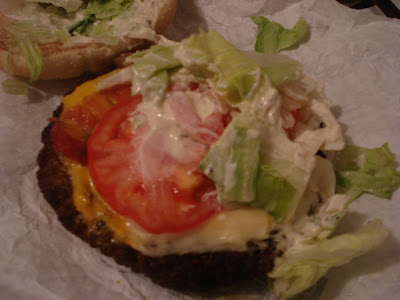 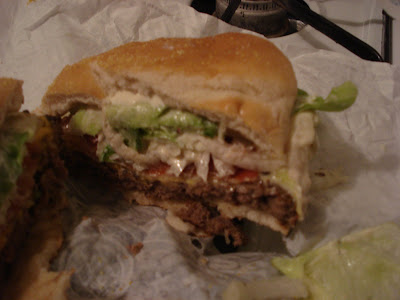 I probably shouldn't even bother trying Burger King promotions; I never seem to like them. The Burger Shots were boring. The Angry Whopper had some tasty parts to it, but overall I found it bland. The Loaded Steakhouse Burger was probably the worst burger I have ever tried. So when I saw that the local BK was advertising the Steakhouse XT, it took me a few days to consider whether I should try it.
As it turns out, it was not bad at all. The patty was larger than usual, and it did not have the dried-out taste that all other BK burgers have. The bacon wasn't great, but I did not immediately rip it off and throw it away, like I do with 90% of bacon on fast food burgers. The cheese was an unnatural-looking orange, but it tasted fine. And the parmesan-peppercorn sauce on the burger was pretty tasty. I actually ate most of it.
Of course, I won't be ordering one again. The burger weighs in at 970 calories and 61 grams of fat. That's as many calories as 7 frozen White Castle burgers. That's as much fat as 6 Del Taco chicken soft tacos. The burger isn't that good. And it's also the most expensive burger I have ever bought at BK - almost 6 bucks. When you consider BK is about a mile from Pie-n-Burger, Wolfe Burgers, and Hutch's, I don't see any reason to spend that much money for this burger unless it's 2 in the morning
Posted by JustinM at 11:10 AM

We don't have them here yet, but when they arrive, I'll maybe eventually try ONE. A thousand calories, not counting fries, onion rings, or whatever else you get with it. Yikes.

The funny (or pathetic) part is, what I actually did get with it was the bacon cheddar ranch tendercrisp sandwich. Which was at least another 1000 calories. I will write that up one of these days.

Does anyone know the calories in a Wolfe Burgers arazona chargrill chicken burger, Criss Cross fries and garlic dips?

You are just an idiot..who cares how mnany calories they are? I inhale them Almost Daily..and you shoulde never throw away bacon, as u claim..no food should EVER be wasted, jerk.

Another internet tough guy. Would love to see you call me those things to my face. But we both know you wouldn't.