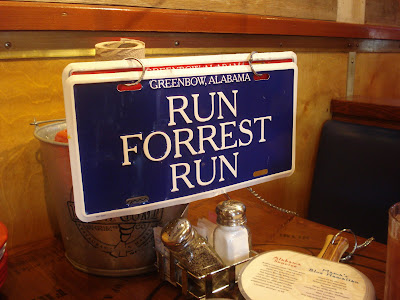 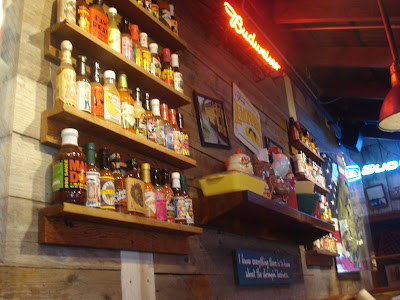 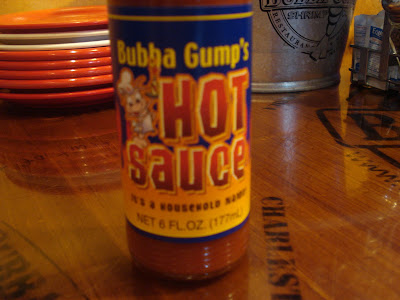 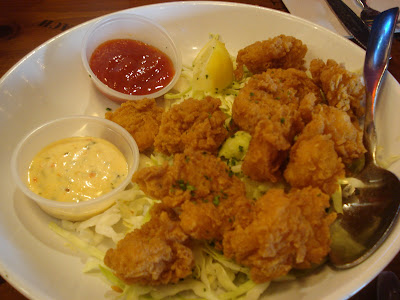 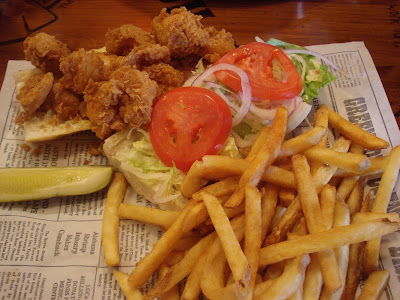 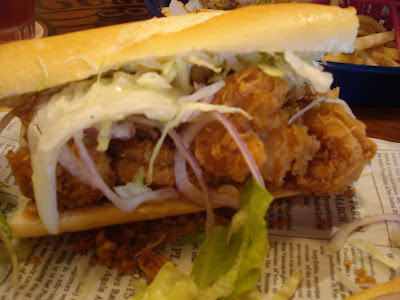 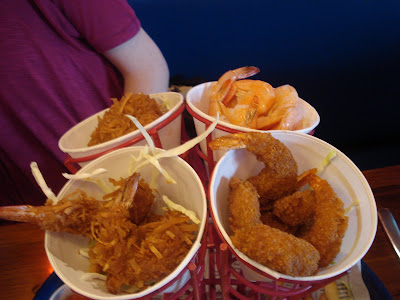 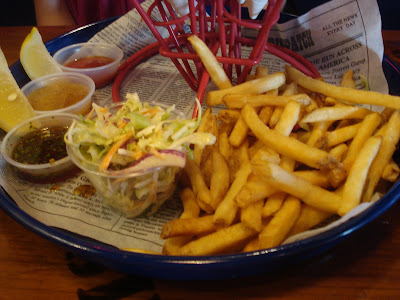 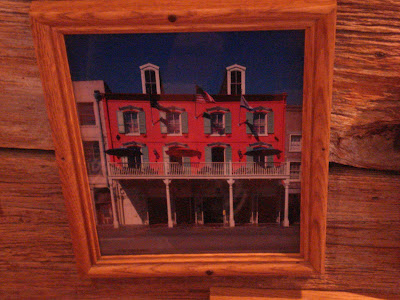 I'm not a huge fan of chain restaurants and I usually detest theme restaurants, so you would think I hate Bubba Gump. But I actually like it. I admit there are several things about it that are absurd (particularly the way they ask you trivia questions about the movie, even when you tell them you have been there before) but almost everything I have ever had to eat there has been good. Shrimp is one of my favorite things to eat, if not my favorite, and, not surprisingly, they have many different kinds of shrimp.
-
I first went to Bubba Gump many years ago when I was in New Orleans for Mardi Gras. After an afternoon river cruise on the Mississippi, we stopped in for lunch because the restaurant had a nice balcony overlooking Decatur Street. I had a giant fruity drink served in a large plastic football with Forrest Gump's number on it (something I still have 9 years later that I put spare change in.) My meal that day was the shrimp po' boy sandwich. My friend Owen had something called the "bucket of boat trash," and he gave me a bite of his fried slipper lobster tail. It was, without question, the best thing I had ever eaten in my life up to that point. I wanted desperately to go back.
-
For the rest of the time in New Orleans I tried to get my friends to go back there, but they didn't want to eat at the same place twice, they wanted to explore the different restaurants of the city. (They were much smarter than I was.) The exception, being, of course, Lucky Dogs, which we all ate every night around 3 in the morning.
-
When I got back to Southern California I immediately looked up Bubba Gump on the internet. There were only about 5 restaurants then (now there are about 30, stretching as far as Bali and Malaysia.) The nearest one was the original, in Monterey, but one was scheduled to open in Long Beach by the fall of that year (2000.) This made me very happy and I couldn't wait to try that slipper lobster again.
-
Then, every few months, the opening date was pushed back. It became "early 2001" then "fall 2001" then "summer 2002," etc. In the middle of 2001 I went up to visit a friend of mine who was working for the California Department of Forestry just north of Monterey, and we visited Bubba Gump. The slipper lobster was every bit as good as I remembered. In the summer of 2002, my friend Tom and I were in New Orleans on my birthday and we went to Bubba Gump.
-
Finally, in February of 2004, the Long Beach location opened. My friend and I went there for lunch on the day it opened. The wait was extreme; I think we waited 2 and a half hours. But it was worth it. In 2005, my friend Min and I walked around the entire Mall of America in Minneapolis then ate at Bubba Gump. In 2006 I ate at the Santa Monica location on my birthday, and last summer Elizabeth and I ate at the Universal Citywalk location, where Gladstone's used to be.
-
Over the weekend we both felt like having some of their fried shrimp, and we wanted to be near the ocean, so we drove to Long Beach. It wasn't a particularly nice day, it was pretty overcast, but the restaurant was still very busy. Although at least half of the crowd were people who work there. (Actually, I should say "people who are employed there." Quite a few of them were not working, unless you consider dancing around, singing songs out loud, and openly hitting on each other to be working.)
-
We started with an order of popcorn shrimp. When I had this in Santa Monica it came served in a movie theater-style popcorn container, which I thought was funny, if a little too cute. These were just served on a plate. I did not care, though, as they were some of the best popcorn shrimp I have ever had. The remoulade they were served with was fantastic.
-
I ordered the shrimp po' boy. The shrimp in the sandwich were the exact same popcorn shrimp we had gotten for our appetizer. I don't know why I expected any differently. I didn't care. I could eat these shrimp every single day. I ate about half of it as a sandwich, then just took the shrimp out and ate them.
-
Elizabeth ordered the "Shrimper's Heaven": chilled peel-and -eat shrimp, coconut shrimp, Tempura shrimp and fried shrimp. Last summer at Citywalk she had this and it was great, although neither of us thought the tempura shrimp were anything special. So she ordered extra coconut shrimp in place of the tempura this time. They were all great. I'm not a huge fan of coconut shrimp, but these were some of the best I have ever had. Her shrimp came with fries and a very good cole slaw (and also the soy dipping sauce for the tempura shrimp, which did not go with any of the other shrimp.)
-
It may be another year or so before I eat at Bubba Gump again, but I'm sure I will. The last picture I posted is of a photograph hanging on the wall in Long Beach: the New Orleans Bubba Gump. It's been a little over 9 years since I first ate there, and almost 5 years since I have been to New Orleans. Hopefully that will be next Bubba Gump I eat at.
Posted by JustinM at 12:01 PM