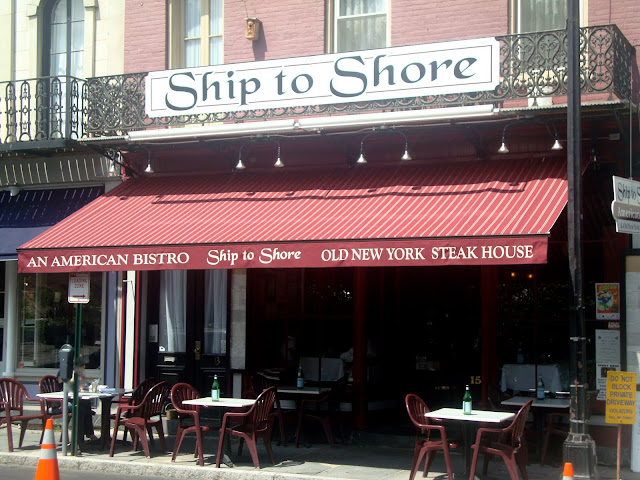 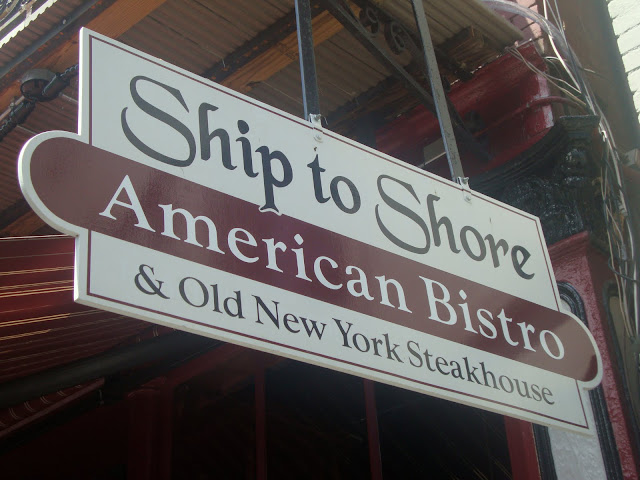 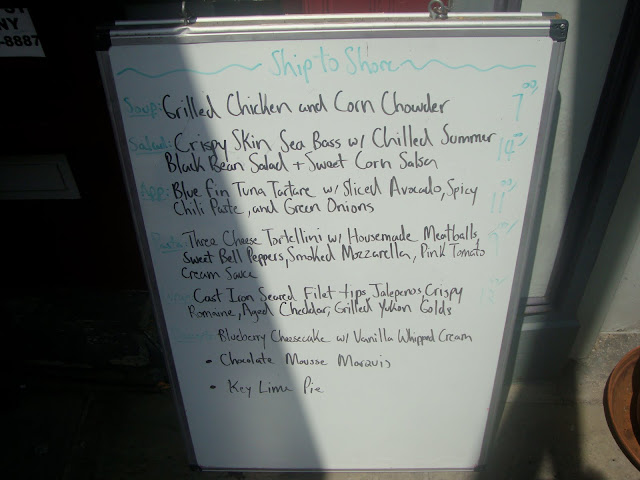 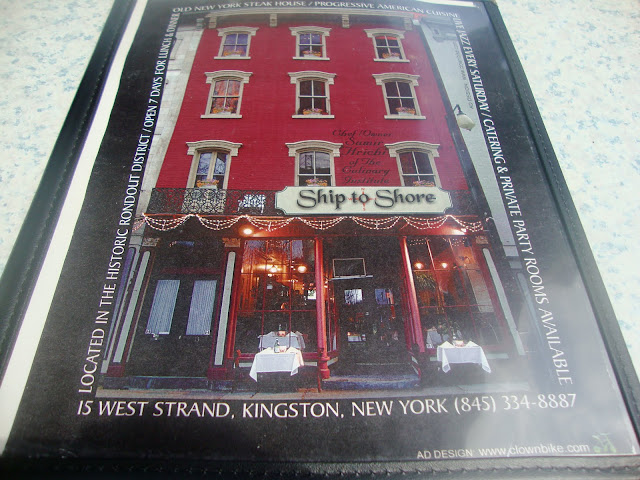 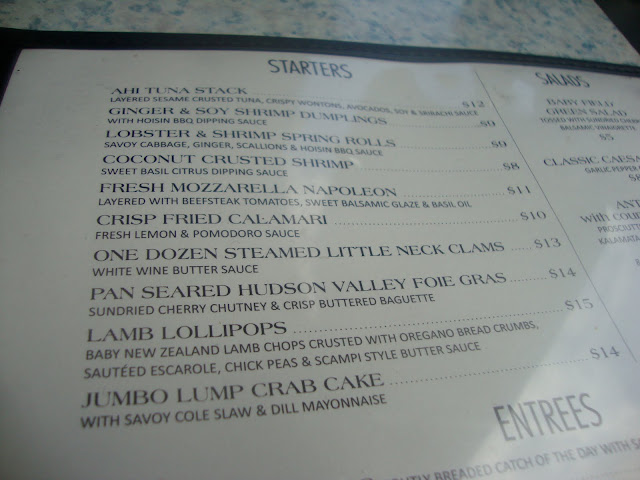 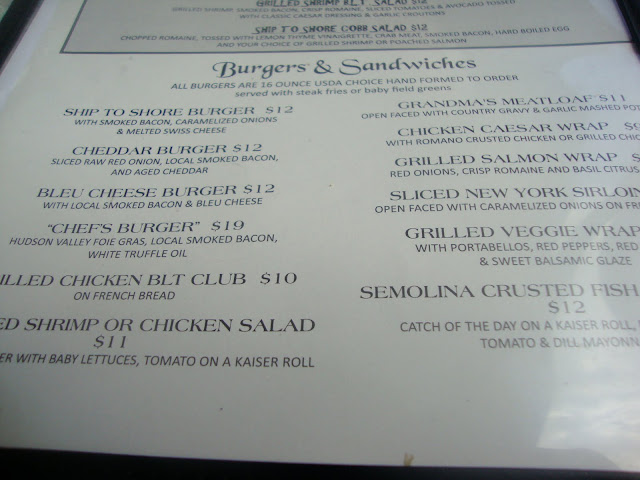 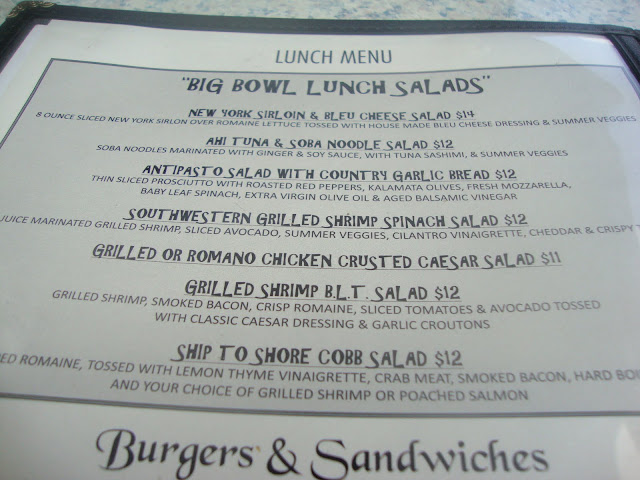 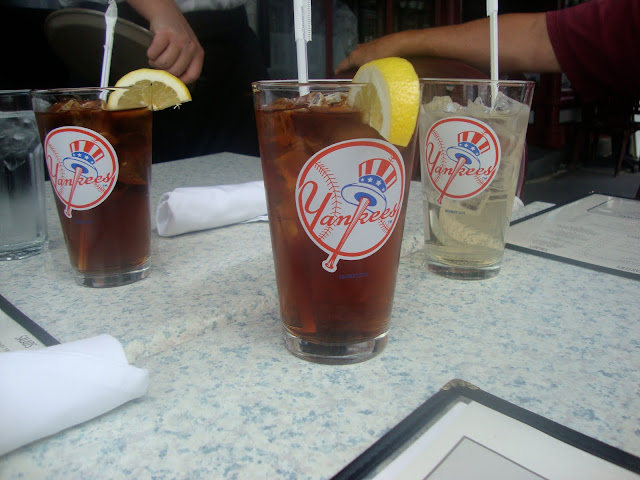 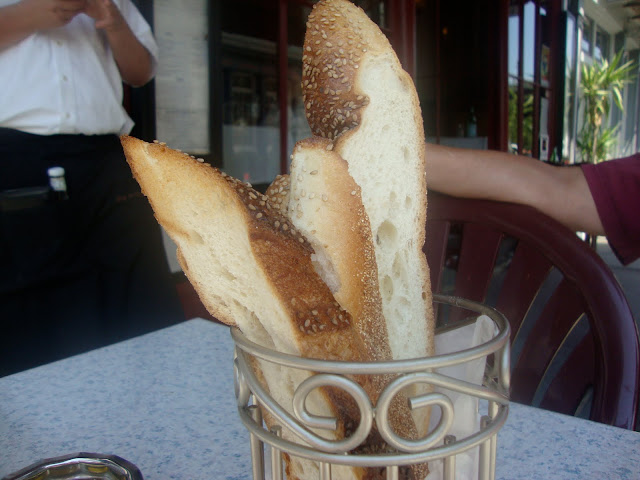 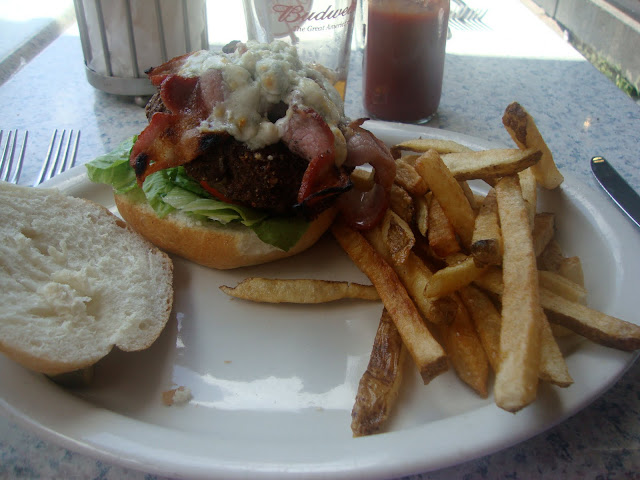 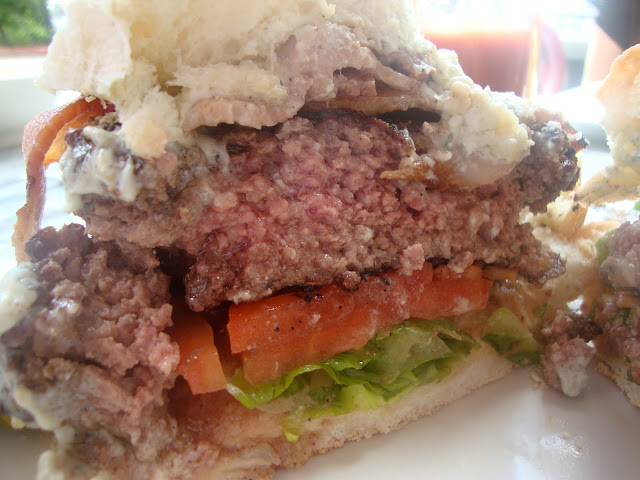 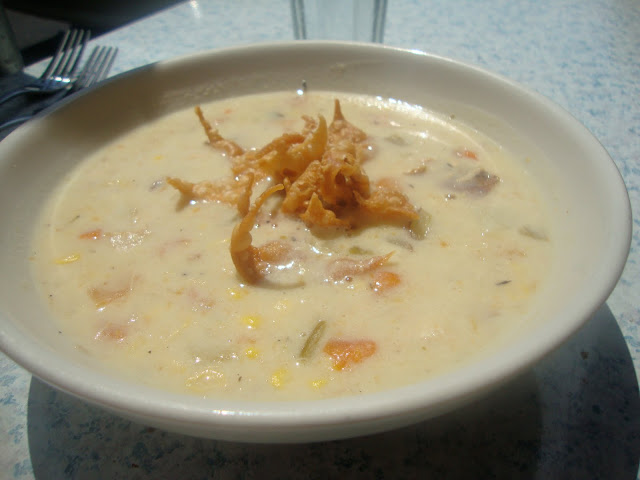 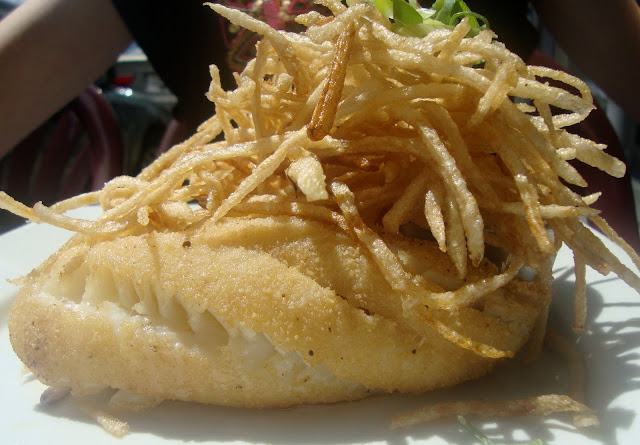 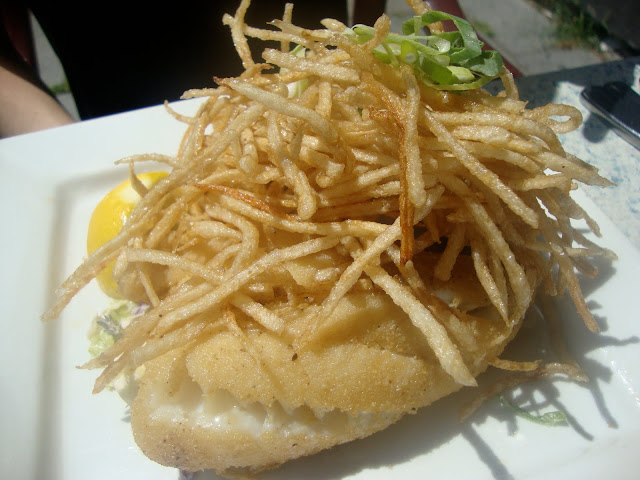 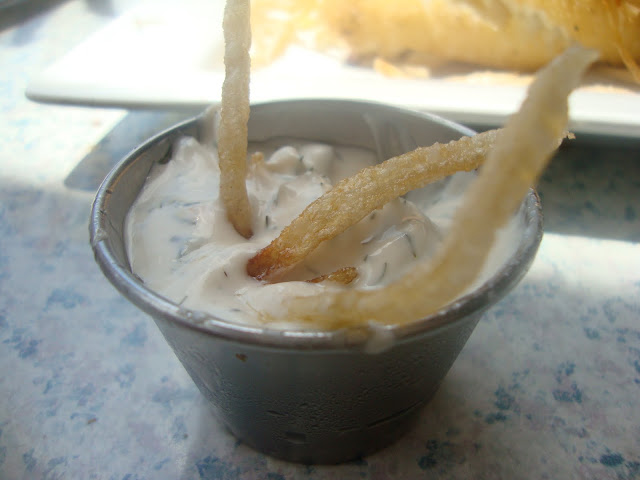 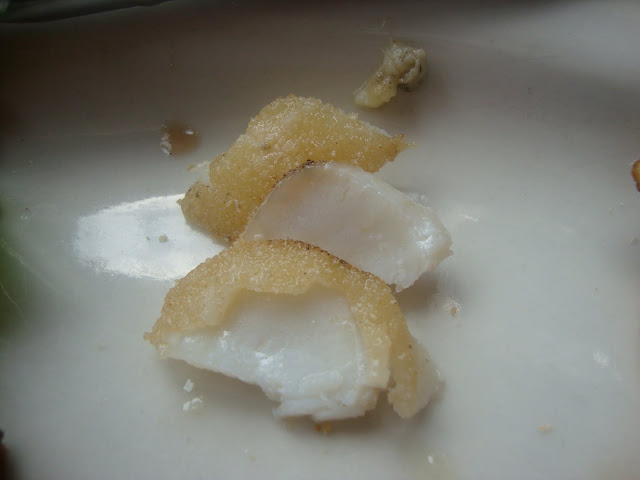 Elizabeth's dad wanted to get some new shoes for the wedding, so we accompanied him to an old-fashioned shoe store in Saugerties, a town whose name seemed awfully familiar to me, although I'd never been. (I still can't figure out why. Either because the house The Band lived in called "Big Pink" was in West Saugerties, or I must have heard it on Law & Order.)

On the drive back we talked about what we should do for lunch. I said I was up for anything, so when Ship To Shore was suggested, I happily agreed. The restaurant is located down by the water in a historic area of town. It was a hot day, but not nearly as hot as it had been, so we sat at a sidewalk table. Elizabeth and I ordered iced teas, her dad a water. All three were served in glasses with Yankees logos.

"Sorry," Rick said, "but the Yankees are the best and they always will be."

I wish the Yankees hadn't won the World Series last year so I could have used the line that has served me well the last few years: "I prefer teams who have won this century."

Whatever. I still drank the iced tea. It's not like it was a Red Sox glass. That I would've refused.

The fish & chips caught my eye and I was thinking about ordering it until Elizabeth informed me she was going to get it. I knew there would be at least a few bites for me so I turned my attention to the burgers. I could not decide between the "Ship To Shore Burger," with bacon and caramelized onions or the "Blue Cheese Burger," with local bacon and blue cheese. I asked the waiter's opinion.

"Well, if you like blue cheese, the Blue Cheese Burger is really popular," he said. "But if you don't love blue cheese, you'll probably hate it."

I do love blue cheese, so I ordered that. Elizabeth ordered the fish & chips, and Rick - who, unlike us, had eaten breakfast - ordered a bowl of grilled chicken and corn chowder.

The food came out at a leisurely pace but we didn't care; it was nice to sit in the sun and look out at the river. So much of the week involved running around doing things for the wedding, it was nice to be able to sit and relax for an hour. When the food arrived it looked impressive. My burger was a thick patty topped with several strips of bacon and a mound of blue cheese. I realized what the waiter was talking about; the aroma of this blue cheese was intense. I cut the burger in half, admiring the juicy pink inside.

Even more impressive looking was Elizabeth's fish & chips. It was a big piece of cod, lightly breaded, gleaming goldenly, and topped with an amusingly large pile of shoestring fries. I knew I would be getting several bites of this.

My burger was outstanding. It's very rare that I order a burger at a restaurant because they're so easy to make at home, and most restaurants tend to overcook the meat and use inferior toppings. This burger was ideal: a little charred on the outside, juicy inside, with the fantastic flavors of high quality bacon and blue cheese. The fries were disappointing, limp pieces of potato, but I didn't care a whole lot since I had a hard enough time finishing the burger.

The fish & chips were - other than the ones I wrote about a couple months ago at The Village Idiot - the best I have had in a long time. The fish was fresh and the light breading enabled the taste of the fish to be the star of the show. The shoestring fries were much better than my fries and I ate several of them, even dipping a few into the lemon dill tartar sauce. (I tried to replicate this sauce not long after we got back home from the trip. I failed.)

Rick loved his bowl of chowder and we even got a salmon wrap to-go for Elizabeth's sister, Kate (the only person I have ever intentionally featured on this blog) which she said was great. I've already selected what I want if I ever return to Ship To Shore: lobster and shrimp spring rolls.

Of all the restaurant meals I had in New York, this is probably the one I enjoyed most. The food was very good and the location was superb. After lunch we walked a couple hundred yards along the bank of the river. I saw a boat named "Proud Mary" and PT-48, the last 77-foot PT boat surviving from World War II.
Posted by JustinM at 9:16 AM

I'd be forever in your debt if you could get me a Bench autograph! I should at least treat you to some Perdue's before they go under :)

The best hamburger I had to travel by Gilboa Dam which is by Windham in upstate NY and it did look alot like that burger you ordered. I doubt that they would have these by Kingston but in the Buffalo/Rochester area they have garbage plates so if you are ever there that's worth a try just once because you probably wouldn't want to try it again...its an experience to say the least.

Have you ever eaten at the Bustaurant in LA? My sister visited me the other week and wanted to check it out but we missed it, went to the Griddle Cafe though - I have to say waiting for an hour for pancakes is so not worth it but at least I can say I went there I suppose.

I was in Buffalo once. I spent the night at my friend's grandmother's house and she made us dinner. The next day we went to the Anchor Bar to eat Buffalo wings. The sign on the building read "open at 10:30" but it was 10:43 AM and the place had another sign saying that they opened at 11. We were so pissed by being mislead that we just left town. We ate at a Subway in Canada. Yes, I was so impatient that I couldn't wait another 17 minutes to try Buffalo wings at the restaurant which invented them. Not one of my prouder moments.

No, I have not been to the Bustaurant, although it looks really good/cool. I would gladly eat at a food truck if I came across one and I was hungry, but I am not as enamored as many people are with the whole concept. I am certainly not going to seek them out, and I would rather go to a Kenny G concert than one of these "food truck festivals."

Now we're talkin'!
I wonder if any other type of restaurant need exist aside from the cacophony of ethnic choices. Even the corn chowder looks yummy.

Yes, one can make an exceptionally good burger at home, but it is a true luxury to sit and relax, with high expectations; knowing that they will be fulfilled, in a convivial environment with friends and not have to prepare or clean up.
That place almost exists here in Pasadena (LGO, Dish come close). I imagine it to be sort of an amalgam of gastro pub and steak house with a wood fire pizza oven.
Hmm, time to get busy...

You know what I think of as being comparable in Pasadena? The patio of Cafe 140 South, née Crocodile Cafe. Admittedly a part of my reason for loving it is that I have been going there for more than 2/3 of my life, and the inside is horrible, a clusterf**k of too-close-together tables and other tables jammed too close to the kitchen. Not to mention being one of the most uncomfortably loud restaurants I have been in when it's crowded.

But the patio, sunk just below the street and shaded, is a beautiful place on a warm day to relax in anticipation of a Kobe burger or a wood-fired pizza.

I have been to the Anchor Bar and was not blown away by their wings, I had better wings in a hole in the wall spot between Buffalo and Rochester where I worked for awhile. But, it's worth it to try at least once if you're in the area..I think they were in some Food Wars show recently as well and lost.

Here I go off on a tangent but that reminds me for some reason, another good thing to try in Brooklyn if you are around during the season is the Red Hook ball fields...google it, I think it is exactly the thing that you guys would love and I am dying to find somewhere like that on the West Coast!