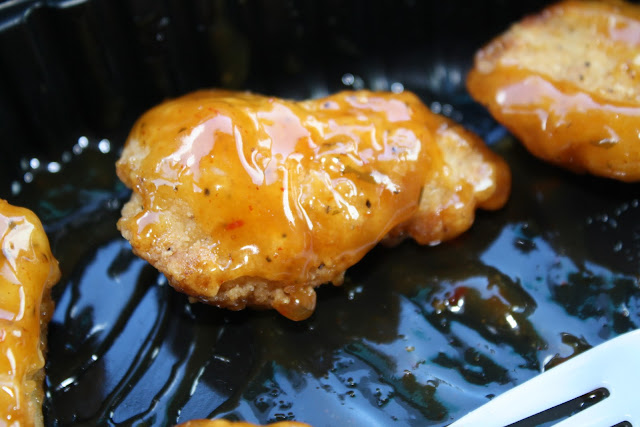 I have long stated that there is almost nothing I love more than boneless wings, that I will always try them. This is why, when a place like Wendy's comes out with boneless wings - basically their chicken nuggets drenched in sauce for three times the price - I do not hesitate to try them. Frozen boneless wings? Sure. Church's keeps shuffling its flavors of boneless wings? No problem, I'll try 'em all.

So you can imagine my reaction when I first read that 7-Eleven would begin serving boneless wings. (I've only eaten at 7-Eleven once in my life: a slice of pizza that I bought, if I recall correctly, on a dare. It was terrible.) Advertised with the not-terribly-clever slogan "Bad to the boneless," 7-Eleven promises that they "don't toss them in sauce until you tell us to." (The contrast with the idea of not cooking them until ordered is obvious.)

Well, I thought to myself, I have to try them or my proclamation about always being up for boneless wings is BS. So I stopped by a 7-Eleven and went inside. Not surprisingly, what I found was a few pieces of chicken sitting out in a heated display case. I told the guy I would like to try the boneless wings in the "Asian Habanero" flavor.

He put six pieces of the chicken in a plastic tray and handed it to me. I had to tell him twice more that I wanted sauce. He walked over to a dispenser and squirted a few drips of the sauce into the tray. There was no tossing involved and he unceremoniously handed it to me. Whatever, it was three bucks. I opened the lid in my car. It was not promising: 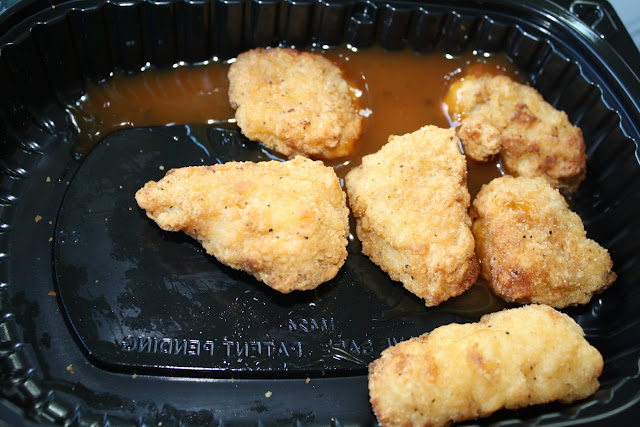 Once again I considered throwing something away without trying it. They should change the slogan from "We don't toss them in sauce until you tell us to" to "We don't squirt a small pool of sludge-looking sauce into a container and place dried-out chicken on top of it until you tell us to." But I guess that's not as catchy.

(I showed Elizabeth this picture last night. "Gross," she said, "it looks like an animal peed on the chicken.")

I placed the lid back on the container and tossed the wings around myself: 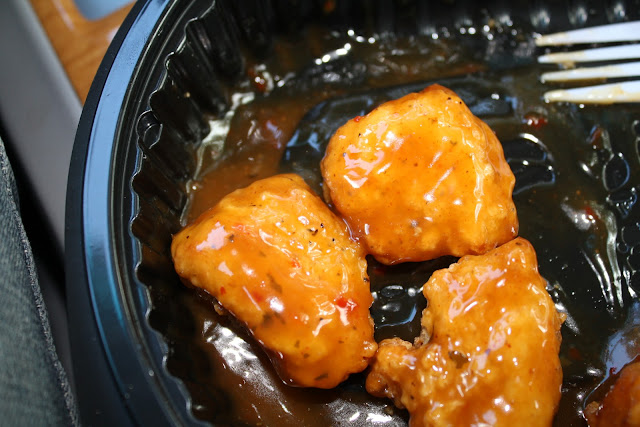 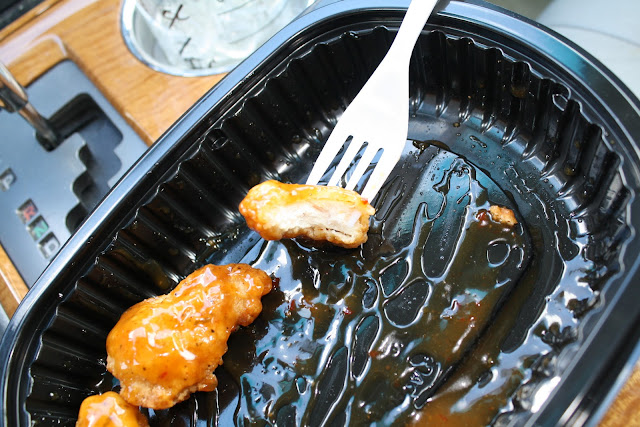 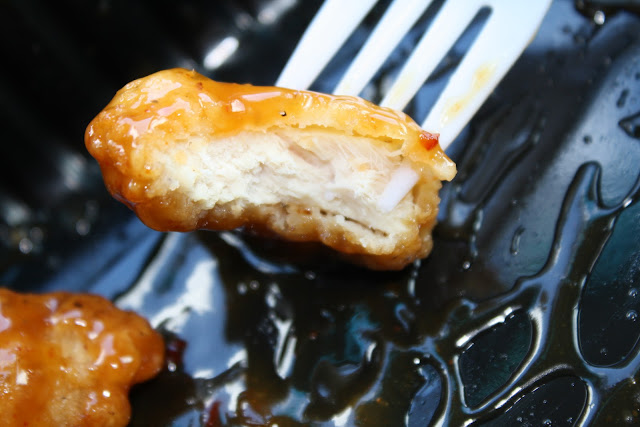 I know this is entirely predictable, but the wings were terrible. The chicken had probably been sitting around for hours and was as rubbery as any chicken I've ever had. The sauce had a nice heat to it, but in order to get there you have to withstand the initial blast of a sickeningly sweet goop. I don't know why the have chosen to call this Asian Habanero; they should probably just call it Corn Syrup Habanero.

I can't really use the word disappointed here: that would mean that my expectations had not been fulfilled. And I didn't have any kind of lofty expectations about an item at 7-Eleven that costs three bucks. But I have to be more careful about expressing my love for boneless wings, because it turns out there are some that I should never, ever try.
Posted by JustinM at 11:21 AM

Very brave.
Amazing how much better they look after tossing, though. (TWSS).

like that old beer commercial "Wingman" - "you're takin' one for the team, so your buddy can live the dream" - the first line applies more so than the second

Yeah but if I had friends it would totally work.

Well, the good news is that you've clearly bottomed-out, that the remaining boneless wing experiences will be an improvement over this.
So let your proclamation stand, it's all up-side now.

Unless AM/PM comes out with them, too. I have a story about that place I will tell you in person. It's far worse than 7-Eleven.

I'm sorry, but I'm going to remain faithful to the only thing I've drunkenly eaten at a 7-Eleven: chili cheese hot dogs at 3am.