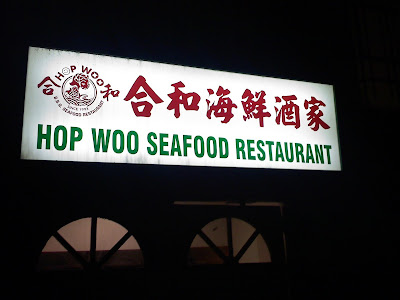 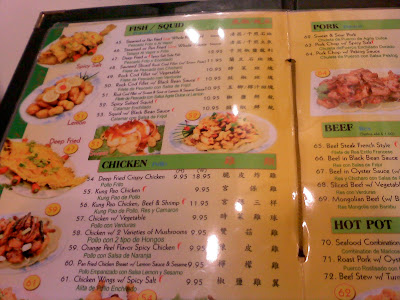 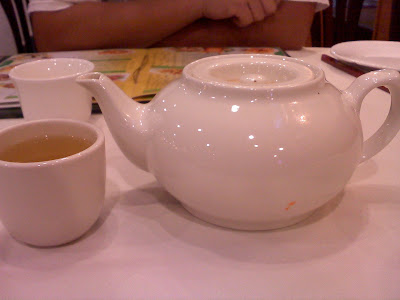 I had a few drinks with my friend Zach at happy hour, something we've been doing for a long time (he's a friend of mine from high school) and our conversation turned towards dinner. Usually we go for barbecue, but we've exhausted all the Pasadena options many times over, so we started talking about Chinese food. Zach is of Chinese ancestry and he knows far more places in the Alhambra/Monterey Park area than I do.
He suggested Hop Woo and I agreed, though I was not familiar with it. We headed down and, in our style, I found that I was the only white person in the restaurant. (I'm not saying this in any kind of ain't-I-hip way, but rather because this has always been a common theme with us. The first time I ever went for dim sum was with Zach when we were 21, a place in Monterey Park, and I was the only white person in the house. They brought Zach chopsticks and me a fork; "It's so you don't have to ask," he commented. Another time years ago his grandmother took a bunch of us out for Chinese New Year's and again this happened.)
After starting with a pot of tea I looked at the menu, though I was prepared to completely defer to Zach. It was also at this point that I realized I'd left my camera at home. So I used my phone. That's why the pictures aren't the best, but hopefully they'll do. 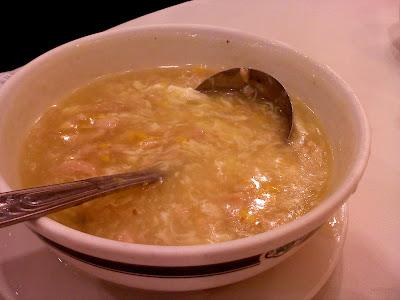 We started with an enormous bowl of chicken and corn soup. It was delicious, one of the better ones I've had in the San Gabriel Valley. I probably ate three bowls worth. 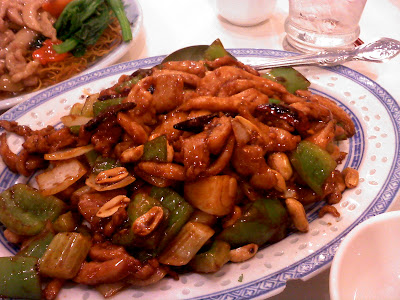 We got an order of Kung Pao chicken, something I haven't ordered in years. (I'm not a huge fan of peanuts.) But I definitely enjoyed this dish, eating around the peanuts, devouring the chicken and the bell peppers. 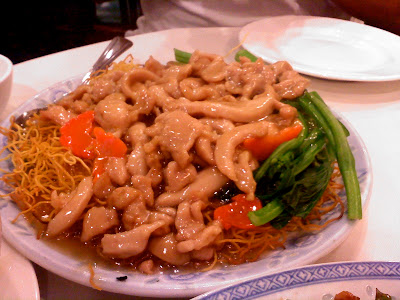 We also got an order of chicken chow mein. This is another dish I have not ordered in a long time (although I remember a lunch about a year ago with Zach and his sister where we got two orders of it). The chicken was tender and tasty and I also ate a fair amount of this. Zach prefers the softer noodles, I prefer the crispy, so it worked out well. 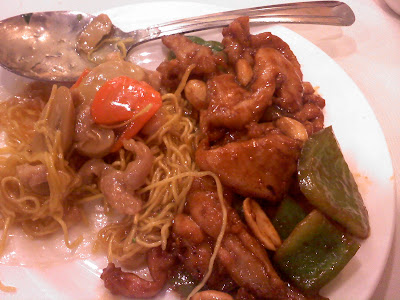 I think I had three plates of food just like this. I was hungry. 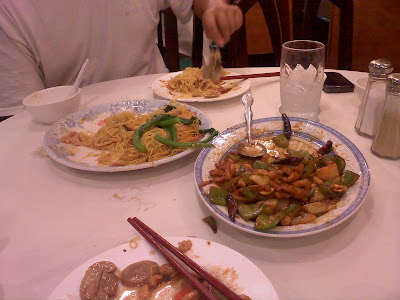 We didn't finish the plates but we came pretty close.

I would be glad to go back to Hop Woo and try some other dishes, but I don't see myself going there again unless Zach wants to. There are far too many Asian restaurants to which I have not been; I would rather experiment with a new place.
Posted by JustinM at 11:45 AM

I'm usually the only non-Asian person as well in SGV asian restaurants.

They need to finally change the policy to allow more non-Asians to eat at Asian restaurants! ;)

The Chicken & Corn Soup looks similar to a recipe that I have from the Madame Wu's Cookbook. She was the queen of Chinese cooking in Southern California in the '70's. The recipe is so quick and easy, and produces an AMAZING result:

Bring the corn, broth and water to a rolling boil. Add the cornstarch blend and mix in thoroughly. Turn off heat. Pour the eggs in a thin stream, stirring constantly. Serve hot.

We add a little soy sauce and some chili paste.

Cafe: They should figure out whatever PF Chang's is doing - that place is always full of white people.

Stephen: Great recipe, I will definitely give it a try.