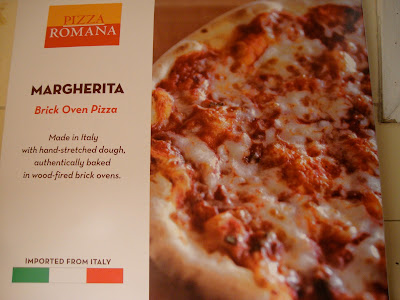 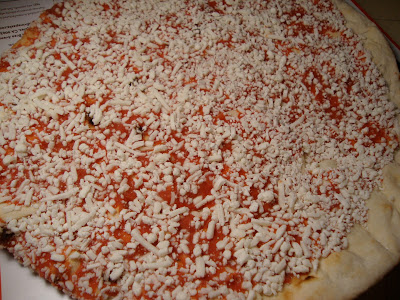 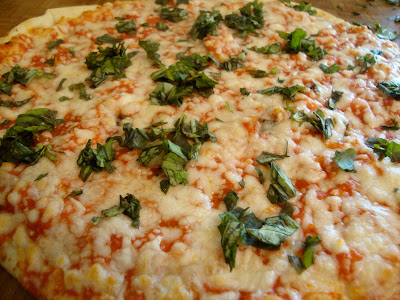 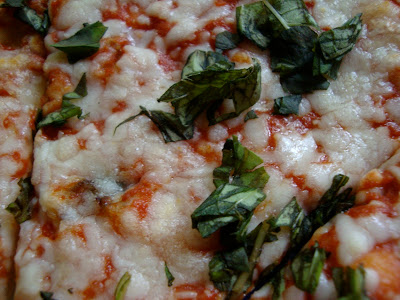 Around the last decade of the 19th century, Margherita of Savoy, the Queen of the Italian Kingdom, noticed in her travels around Italy that the peasants were often eating flat breads. Intrigued, she tried and fell in love with the food, despite the fact that it was not considered appropriate for a Queen to eat the same food as peasants.

To honor the Queen, a local chef created a pizza in the colors of the Italian flag: red tomatoes, white mozzarella, and green basil. It became known as the Pizza Margherita.

At the beginning of the second decade of the 21st century, Justin of South Pasadena decided he wanted to eat several Margherita pizzas at home to decide which he liked best.

The first one was a Pizza Romana frozen pizza I picked up from the outstanding Roma Market up on Lake Ave. Claiming to be made in Italy, this pizza was thin crust with just a slight dusting of cheese. I cooked the pizza in the oven for only a few minutes and then chopped up some fresh basil and topped the pizza with it.

The crust was outstanding for a frozen pizza but there wasn't much flavor in the cheese and sauce. Overall though, it was very high quality and I enjoyed it. Next time I cook one of these (and I definitely will) I will add some sprinkles of fresh cheese to it and at least another handful of basil. 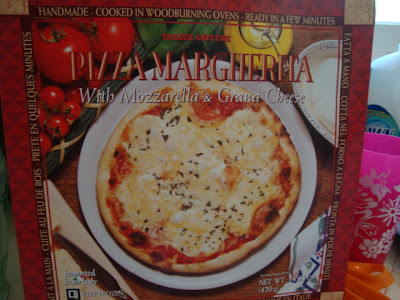 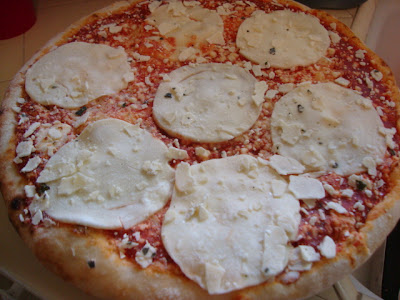 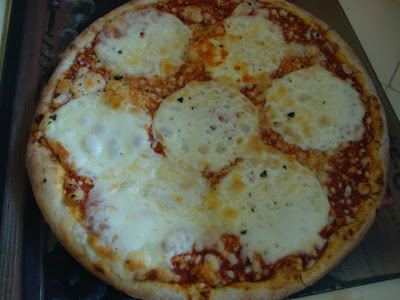 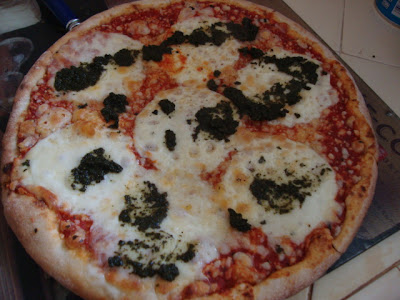 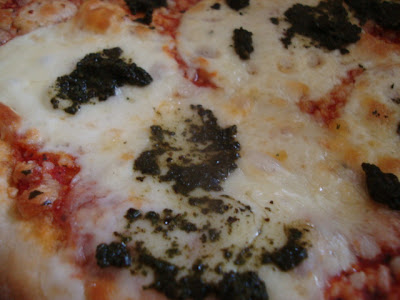 Trader Joe's frozen Margherita pizza has long been a favorite of mine. For $3.99 you get a pizza as good as many restaurants (in California) and with a few slivers of fresh cheese and basil, it is close to being the best frozen pizza I have ever had. But I was out of fresh basil on this occasion. I wasn't in the mood to go to the store.

Then I remembered I had frozen cubes of basil in the freezer, those little things from Trader Joe's that I bought months ago and haven't used. I defrosted a few of them and sprinkled them over the pizza. They tasted good but of course are no substitute for fresh basil. 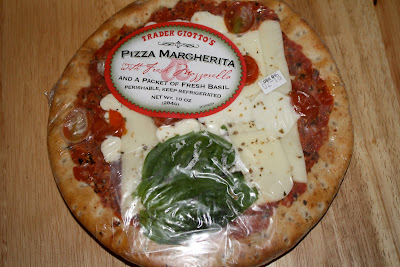 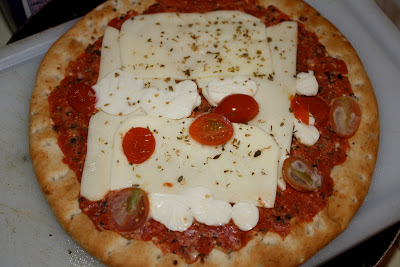 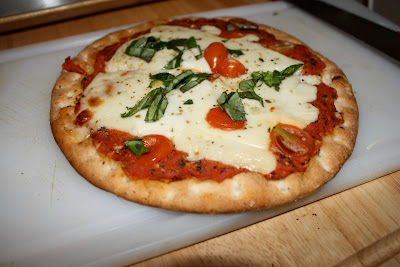 In the refrigerated section of Trader Joe's is a smaller Margherita pizza - resplendent with the "Trader Giotto's" label - with fresh mozzarella and a packet of fresh basil. This one takes about ten minutes in the oven. After it is cooked I chopped the basil and sprinkled it over the pizza. (I like most greens slightly wilted on my oven-cooked pizzas, but never basil.)

The sauce is good on this pizza but that is the only thing I enjoyed: the crust was flavorless, the cheese was watery and it needed more basil. It may seem surprising that a frozen pizza from TJ's tastes fresher and more flavorful than a "fresh" pizza, but that is the case.

As an appetizer for two or three people, I see the value in this pizza, but not as a main meal. 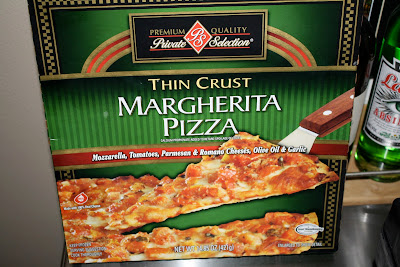 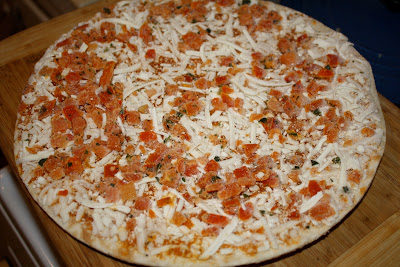 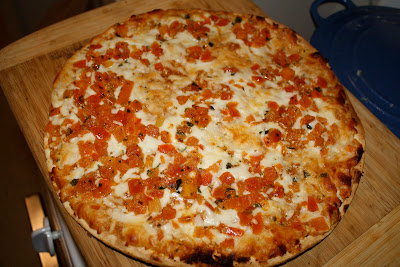 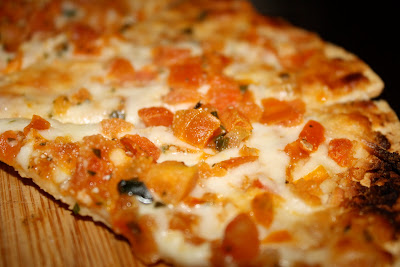 At Ralph's I saw that their private-label ("Private Selection") pizzas were on sale, two for $5. So I made sure to get a Margherita, not expecting much. And when I unwrapped the thing, I was expecting even less: it was a super-thin crust, skimpy on the cheese, with seemingly freezer-burned tomatoes. I put it in the oven for 15 minutes.

Surprisingly, shockingly, the crust and sauce were absolutely delicious, possibly the best of any of the pizzas I had during this experiment. Not surprisingly, the cheese was a watery, flavorless mess and the tomatoes were disgusting. That may sound strange coming from me, since I already loathe tomatoes, but these were as bad as you can get: soggy little bombs that distracted from every single bite.

The companion pizza I bought was an "extra pepperoni" version, and it was outstanding; it had the same crust and sauce but much better toppings. This Margherita was just bad. 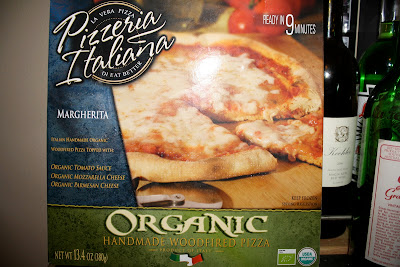 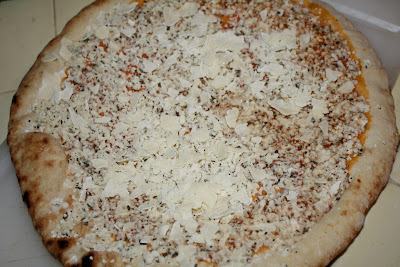 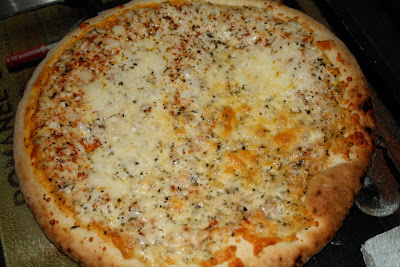 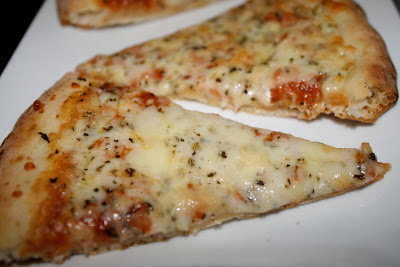 At Whole Foods I noticed the final pizza - La Vera Pizzeria Italiana, an "organic handmade woodfired pizza." Also noted on the box were the words "ready in 9 minutes," a strangely specific promise. When I opened the box, it looked a lot like the Trader Joe's frozen Margherita pizza.

After a few minutes in the oven - slightly more than 9 - I removed it. It also smelled like the Trader Joe's pizza. But it didn't taste as good. I had no more basil to add, and that would have helped, but overall this was a just a bland pizza with lousy crust.

I know it's almost impossible to make good frozen pizza, which is why I rarely eat it anymore; I usually use fresh dough and make my own pies. But I wanted to try these to see if any of them were good. The only two I will ever try again are the Pizza Romana and Trader Joe's frozen pizzas
Posted by JustinM at 11:30 AM

Ew, I know what you mean about those tomatoes. I hate it when pizzas (usually frozen ones) have those tiny cubes on them. They taste of nothing but annoyingness.

Wha!?! Do my eyes deceive me or is that an old bottle of Penfold's Grange Hermitage sitting next to the La Vera Organic pizza???

It is an old, empty bottle, and my was it delicious.

You must know Pizza may be my fav food. My Last Meal!