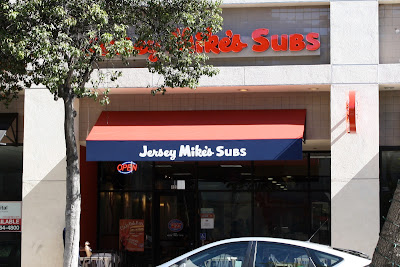 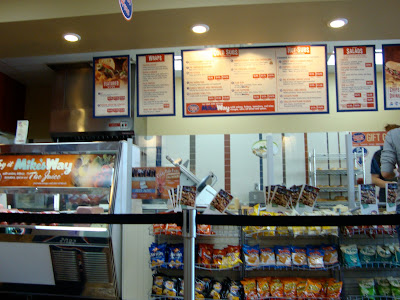 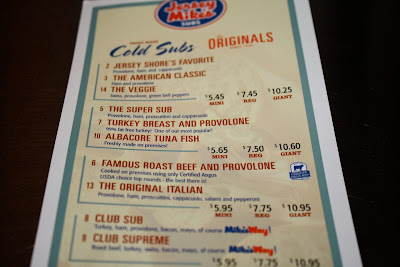 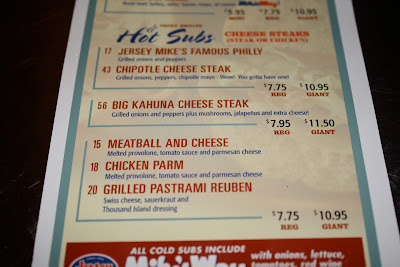 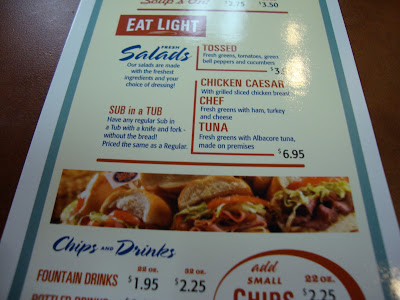 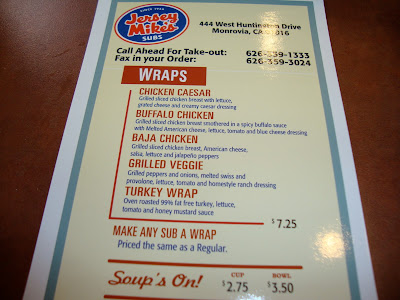 Not long ago, it was one of those cold mid-winter evenings when nothing in the world sounded better than ducking into Philly's Best and having a cheesesteak, some fries dunked in a blend of ketchup and hot sauce (more of the latter), and sitting under the flatscreen TV and catching a few minutes of the Lakers game. I could feel the soft roll in my fingers. I could taste the crispy fries. I could see Andrew Bynum getting out-rebounded by someone ten inches shorter.

But Philly's Best has been gone for months now, a victim of a location (in the Del Mar train station) that never caught on as a fast-casual dining destination. (And I'm sure the apathetic employees who often closed up shop twenty minutes before the posted closing time did not help, either.)

A day or two later, however, I got a text from my friend Zach that I should try Jersey Mike's. Zach is one of my most trusted food and adult beverage accomplices (despite the fact he does not like cheese, seafood or mustard; the mind, she boggle) and I was determined to try the place, despite never having heard of it.

So I Googled it and lo and behold, there is a location on Lake Ave in Pasadena, only two and a half miles away. A few days later, Elizabeth and I stopped by for lunch.

The menu at Jersey Mike's is larger than Philly's Best, with salads and wraps, but we both knew we were going to get sandwiches. I mentioned to the girl behind the counter that this was my first time; she said I should definitely try the #17 - "Jersey Mike's Famous Philly" which, in addition to being fun to say, is their best seller. Elizabeth ordered that so I decided to try something else: the "Chipotle Cheese Steak." 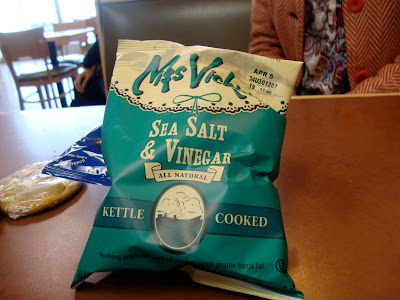 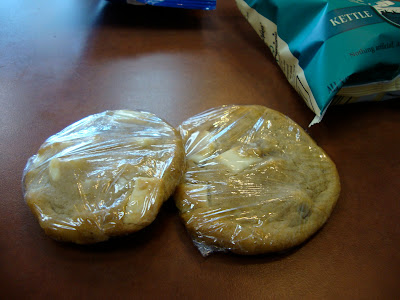 We both asked for drinks and the girl gave us the classic upsell: "Make it a combo for only a quarter more!" We said sure. The combo includes a bag of chips and a cookie; we got different bags of chips but we each selected a white chocolate cookie. 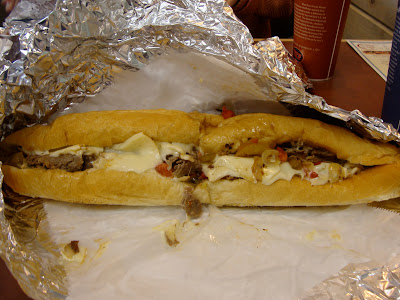 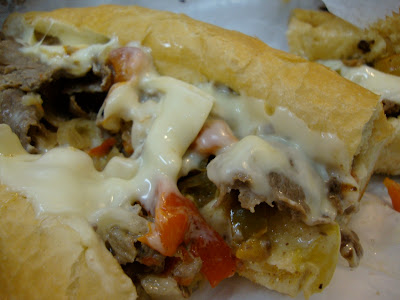 Sandwiches are offered in two sizes: regular and giant. We both opted for the giant size. And it was indeed enormous, at least 12 inches long. Of course, they could have been twice that size and I would not have been impressed unless they tasted good.

As it turns out, they were delicious. The steak - which I understand is the best part of the sandwich - was not the best I've ever had (Philly's Best was better) but the peppers and onions were great, the bread was perfect, and the chipotle mayo, which I was worried would be out of the place, was a great complement to the sandwich. 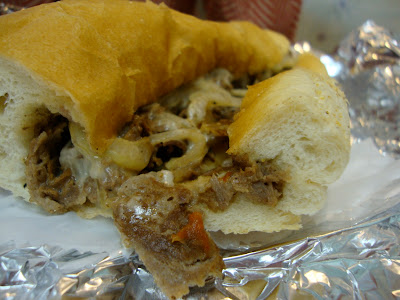 Elizabeth had the same thing she always got at Philly's Best: a cheesesteak with American cheese and onions. She loved it as well. We both only ate half of our sandwiches and wrapped the remainder to take with us. The next night we heated the sandwiches in the oven for a few minutes and ate them; they were just as good reheated, which has always been my litmus test for cheesesteaks.

So, the obvious question: which do I like more, Philly's Best or Jersey Mike's? And the answer is Philly's Best. The meat is a higher quality and they have very good fries. And, it is much less expensive. Our standard order at Philly's Best (two sandwiches, two drinks, one fries) was always $19 and change. This meal at Jersey Mike's was more than $29, a full ten dollars more. Yes, the sandwiches were bigger, but not that much bigger. And the chips and cookies were nothing special.

However, Philly's Best is gone, so the next question is: will I return to Jersey Mike's? And the answer is absolutely. It's a little overpriced but it's still delicious, and I would not mind stopping in from time to time for a cheesesteak. But I will never have the relationship with it like I did Philly's Best.
Posted by JustinM at 10:57 AM

glad to see you got some Canadian potato chips (Miss Vickies!) with your subs. I think your review is almost identical to how we felt. Delicious, but overpriced.

Their roast beef, which is cooked fresh on site everyday, is what I really like. I haven't been able to venture out from getting that yet.

And going there with a coupon is key. Just enough of a discount to bring it back into reasonable.

Ben: There is a Subway a couple blocks from us. I don't love Subway but in a pinch their subs will do. We get two subs, drinks, chips (non-Canadian, sorry) and cookies and the total is almost exactly half of what Jersey Mike's is. Is Jersey Mike's better than Subway? Definitely. Is it twice as good? Nah.

Zach: Where do you get the coupons? Despite the fact there is a billboard just down the hill form me advertising Jersey Mike's (something about supporting the Lakers, actually) I have never seen a coupon. Although I signed up for their email club, will that get me coupons?

I tried it and thought the bread to meat ratio was much too high.

Next time you get the craving for Cheesesteak, consider trying the Philly Cheesesteak at Luigi Ortega's in Pasadena, across from PCC on the north side of Colorado. You have to ask for the "Cheez Whiz" version. In my opinion, this is the only local Cheesesteak that equaled Philly's Best, although I yet to try Jersey Mike's.

Michelle: Although I had no problem with it, I understand what you're saying, especially at $10.75 for one sandwich.

Stephen: I actually was going to write this in response to Ben but chose not to: a friend of mine has told me that Luigi's is very good but I thought it was more of a restaurant than a sandwich shop. Looking at their menu, though, it seems like I'm wrong. Never make assumptions. I will try it soon. And I promise I will order it "Wit' Wiz"

Justin: It is an interesting place. When I went in, and saw 80-90 things on their menu, I thought to myself that there was no way, with that many things, that they could do anything particularly well. I did make the mistake of getting the cheesesteak to go, and it was a bit of a mess by the time I ate it, but still very good.

There's a Jersey Mike's literally a 1 minute drive down my road. I love it so much (and the manager is cute...). Although I always get the same thing (turkey & american or swiss on wheat with lettuce and extra oil, vinegar, and spices), it's always good. Their wheat bread is awesome.

However, I agree; it's extremely expensive, at least in my opinion. Getting a mini sandwich (they have that size here - half the size of a regular) and drink easily costs over $7.

It's still nice to have once or twice a month though!

My wife and I went to Luigi Ortega's this afternoon. This visit produced a cheesesteak that was more Cheese Whiz than meat, and very inferior (this time) to Philly's Best. I must withdraw my previous recommendation and will now be driving to the Philly's Best in Monrovia for all future cheesesteak cravings.

Funny - Elizabeth and I drove by it today and almost stopped - this would have been a little after 1 - but we decided to hit up La Estrella for tacos instead.

I tell you what: I will still visit and take pics, but if I don't like it I will not hold you responsible.

I only went to the Philly's Best in Monrovia once and I was disappointed. They were really busy so maybe they rushed things, but it was worse than any meal I ever had at the Pasadena location.

If I'm gonna spend $30 for food for two, then I'd rather get something more than subs & potato chips.

Definitely - those are restaurant prices, not sandwich shop prices. But, like everyone has pointed out, it's pretty damn tasty stuff.