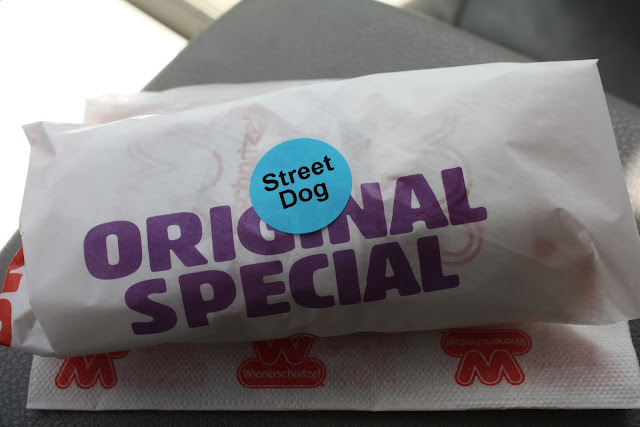 I've been aware of the Danger Dog, the Jersey Ripper, the Tijuana Dog, for many years now - hot dogs wrapped in bacon, often deep-fried, topped with an assortment of onion/chili/mayo sauces. I once ate a hot dog in New Orleans (not the legendary Luckys Dogs) similar to this, and I once ate a comparable hot dog in Manhattan at two in the morning from a guy who, in my memory, was cooking them in the trunk of his car. (I may be wrong on this point.)

But I was surprised when I read that Wienerschnitzel would begin selling bacon-wrapped hot dogs. It seemed to me the charm of such things is the spontaneity of buying them at street fairs or soccer games or places where you're really hungry and the smell of frying bacon entices you. The idea of going into a national chain and purchasing one did not seem as fun to me. But then again, what the hell do I know?

At any rate, I had to try one. So I headed to Wienerschnitzel, one of those locations with actual indoor seating instead of an A-frame stand. There were no advertisements for it on the outside, but I went inside and there was a poster on the menu board, advertising a plain bacon-wrapped dog or the "street dog," loaded with onions, ketchup, mustard and mayonnaise. In bold print it read "$1.79 each."

"I would like the bacon-wrapped street dog to go, please" I said to the girl behind the counter. I paid and stood around for five minutes before receiving a bag and walking out to my car. I unwrapped it to find this: 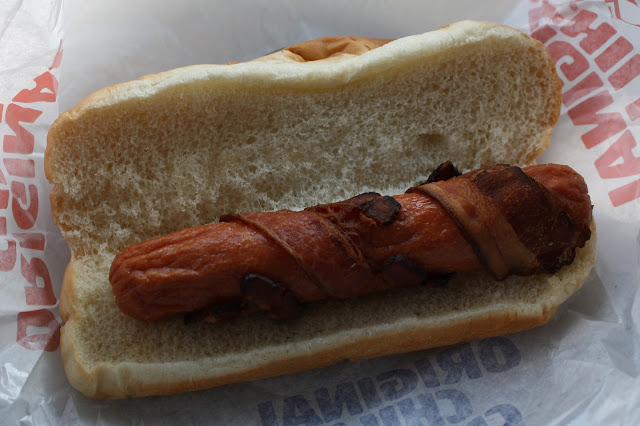 It didn't look terrible (although it didn't look great), but of course it had nothing on it but bacon. I considered simply ducking back inside, grabbing some packets of ketchup and mustard, and eating it that way. But I wanted to try the real thing, the way it's supposed to be served. I walked back in and handed it to the girl behind the counter.

"I asked for the street dog, this is just bacon," I said.

"You ordered it plain," she replied.

I did not point out that never once have I ordered a hot dog plain in my entire life, I simply repeated my order from before, verbatim. She swiped the dog off the counter with an annoyed grunt, as if making me the proper dog would be a labor akin to cleaning the Augean stables.

"I know you didn't order the street dog," she said again.

There are three ways you can go here, other than asking for your money back and/or leaving, and I have certainly done all three: get angry and argue, say something rude and condescending, smile and be polite. The first option feels good but gets you nowhere. The second feels better at first; later in the day you just feel like a dickhead. The third option is usually the best.

"Okay," I said, "Can I please have the street dog this time?"

This is when that advice about taking a deep breath before you speak is crucial.

"It doesn't say that," she replied.

Now I was starting to lose my patience. It's not like we're debating whether to start Gasol at the 5 and bring Bynum off the bench; she's making a claim that is demonstrably false.

I extended my finger towards the sign over her shoulder, the one clearly stating the hot dogs are $1.79 each. "It says it right there."

I mean, what the hell else was I going to say at this point? She was clearly in control and I was not willing to challenge that control for twenty cents, an amount I learned earlier in the day - when I made my first phone call from a public phone in perhaps a decade -  won't even pay for half of a local call.

(I should also point out the obvious risk inherent in being rude to people preparing your food behind closed doors, a risk that rises exponentially when the item costs $1.79 $1.99 and involves bacon and mayonnaise.)

Another few minutes later I had my correct dog and unwrapped it in the car while listening to Charlie Sheen calling in to a sports talk radio show. The things you do for your blog, my friend's words echoed in my ear. This is what I got this time around: 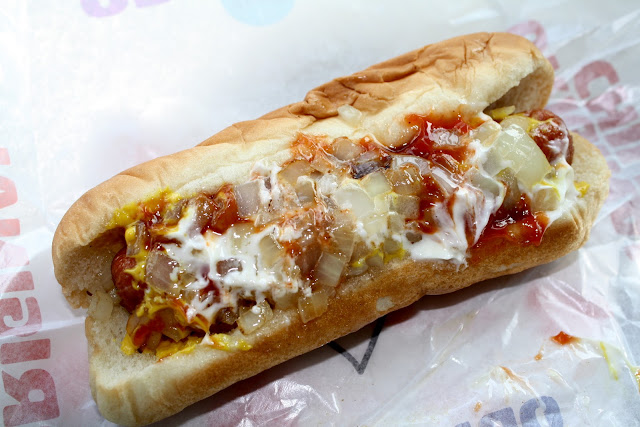 Only a small handful of times have I ordered a product, been presented with it, and seriously considered not eating it. This was one of them. But what the hell... Buy the ticket, take the ride, as the Doctor used to say.

And, predictably, at first bite I almost spit the thing out. The deluge of toppings - toppings that I had insisted on getting - were not a good flavor combination. I've had street dogs before, ones slathered with mayo, even ones with crushed potato chips, cabbage, mayo and ketchup... but none tasted this funky. It was a creamy, semi-solid mass that simultaneously tasted of familiar flavors while at the same time something I have never had before, something no person in a state of sanity or sobriety should ever ingest. 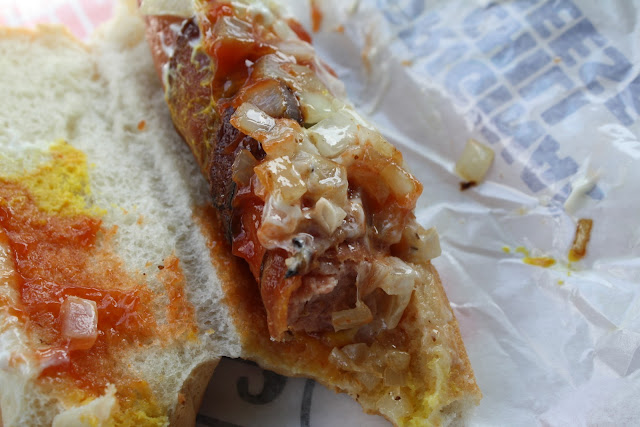 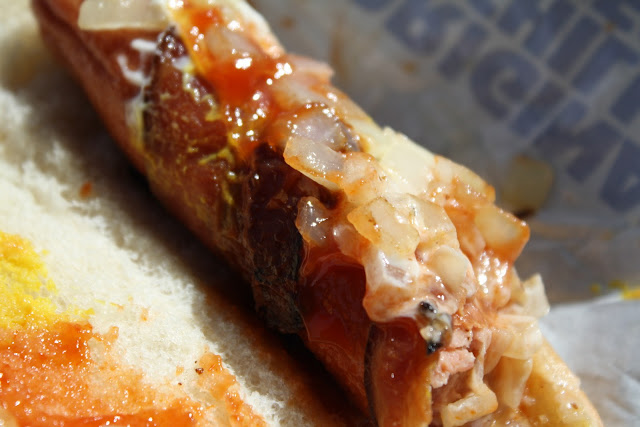 The hot dog and bacon, however, weren't bad, even... good. I like Wienerschnitzel's wieners and this one was no exception. The bacon was crispy and complemented the wiener. And with the second bite I did not mind the flavors of the toppings as much. (I fully allow for the fact that I may have just been numb to them by this point, the way that second spoonful of cough syrup never tastes as bad as the first.)

I did not finish the dog, though. It just wasn't worth it. I can respect what they're trying to do, to make a fast food hot dog like you might buy off the street... but something is definitely lost in the translation here.
Posted by JustinM at 10:50 AM

You showed good restraint. I probably would have torn that girl a new one.

that chick coulda been like "oh ok sorry about that" and everything would have been fine.

as for the hot dog, i dont like schnitzels dogs. to me, theres zero taste. they taste like nothing to me. i prefer a&w's much fattier, more sausage-like dogs. lots of yummy flavor.

but i think ill try a wienerschnitzel street dog, no doubt.

Jesus. That looks horrible. I assume you have seen the movie Road Trip?

SuperLarge: Yeah I hear you.

Nosh: I hear you too.

Michelle: Did you ever read The Great Gatsby? I try to remember the second line of the book. It helps me almost every day.

Anon 1: You know, I haven't been to an A&W in at least a decade but I remember liking it. I'm gonna Google right now... Baldwin Park, 12 miles away. Maybe one of these days I will make it there.

Anon 2: I saw it many years ago. To what scene are you referring? I remember Horatio Sanz putting something (French toast?) in his pants and shuffling around.

In my younger and more vulnerable years my father gave me some advice that I've been turning over in my mind ever since.
"Whenever you feel like criticizing any one," he told me, "just remember that all the people in this world haven’t had the advantages that you’ve had."

They made a book out of it?

Man. I totally got excited when I saw the bacon dog...but after reading it I'm kinda down haha. Hopefully it gets better!

Yeah, Justin. The book is almost as good as the movie. But I think Redford might have been mis-cast in the book.

oh wow, what an episode! You really took one for the team here. This looks very, very bad. I think you're better off getting one from a little cart outside a hollywood club at 2am.

I agree, although my days of being at Hollywood clubs are done. If I'm up at 2AM these days, I'm probably getting up to do something.

I was thinking about trying one of these but now I'm not so sure.

I think if you troll around Spring Street near Cesar Chavez you can find a lady selling these. During the day no less!

That sucks that you didn't like it. I thought it was great and wished i had ordered two of them instead on only one plus a deluxe dog!

Did yours have that many toppings, Dave? Because I liked the wiener and bacon, just not the toppings. I felt it could have used way less mayo. I should have stuck with the original one and just put mustard on it.

Wut weinerschnitzel did u go 2? That street dog looks nothing like the ones here in San Diego, and they are amazing!

I can tell you where to get a great authentic LA street dog in downtown LA.

I had the bacon wrapped street dog at a DW near the Ontario (Calif.) airport and it was actually pretty good. I think it depends on the employees. Clearly, you were dealing with some people who "Haven't had the same advantages that you've had." Was she a teenager, or in her early 20's? The employees where I went were at least in their 30's.

Well it was almost three years ago, but I remember her as being late 20s. Certainly old enough to be better at customer service, but at the same time probably not happy with how her life has gone.