Jack in the Box Fish & Chips 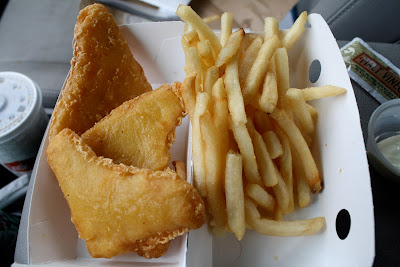 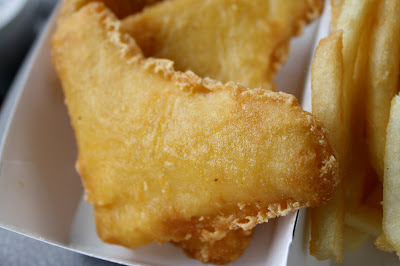 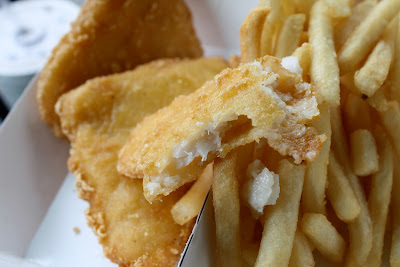 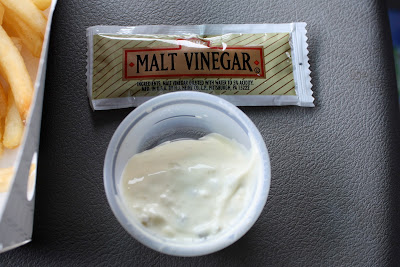 I was craving some fried seafood. It's one of those things that I get an intense desire for and nothing else will do. I have to have it. Like the Lakers going after a loose ball, only the opposite.

I was thinking of returning to Pasadena Fish Market, where I'd had spectacular fried shrimp a couple months ago. I wanted to try the catfish, which I've heard is even better. But it happened to be pouring down rain at the moment I got there. I was wearing a sportcoat with no umbrella in the car and I thought Ah, hell, I will just go through a drive-through somewhere. I remembered reading that Jack in the Box is promoting their fish & chips for Lent. I was just hungry enough that I decided it might be a good idea.

I ordered the combo ($6.01 with a drink), waited several minutes at the window, and pulled over to the side of the road to eat. I know pictures on a fast food company's website are deceptive, but this made me laugh even more than usual; the battered fillets I had seen in the ad were instead three triangles about the width of a matchbook. If they were any thinner they'd only have one side.

I squirted the packet of malt vinegar on the fish and took a bite. It wasn't bad. It was actually kind of... good. Not good in the I'm-gonna-tell-all-my-friends-about-this way. But better than I was expecting. Sure, the batter was not crispy and it disintegrated like cotton candy, but the fish was moist and tasty. The tartar sauce was like most other chain tartar sauce: it tasted like mayo. Without the vinegar I probably would not have liked the fish as much. And if I hadn't been so hungry, who knows? (I may well have found it disgusting.) But I ate them all and I was happy.

Would I ever get this again? On a rainy day and in one of my fried-fish-craving moods... maybe. But any other time? No. for about the same price I could have gotten a styrofoam box of cornmeal-battered fish, fries and slaw at the Fish Market, and that would have been a whole lot better.

I always order the Fish and Chips! I usually though sub the fries for zucchini though.

"Not good in the I'm-gonna-tell-all-my-friends-about-this way."

Well, you posted it on your blog, so technically... lol

Hell, Jarrett, my friends don't read my blog. They say it sucks.