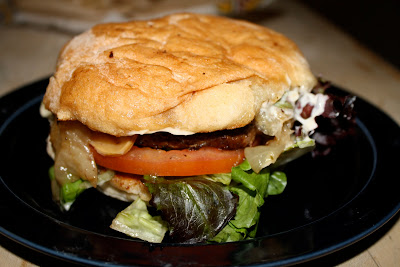 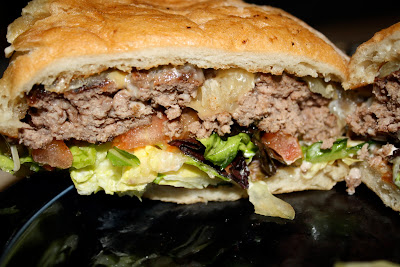 Friday night, Elizabeth said that a Kobe Bistro Burger from Tops sounded really good to her. While waiting for her to get home, I looked at their menu online to see what I felt like getting, and discovered that they are donating $1 from every Kobe Bistro Burger they sell to the Red Cross in the name of the Japanese earthquake/tsunami relief. So we ended up each getting one of them. As usual, they were quite tasty. 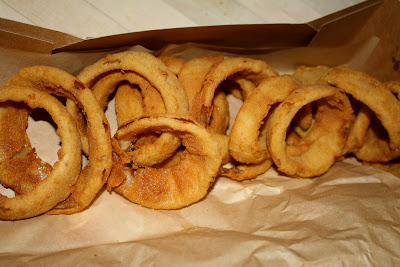 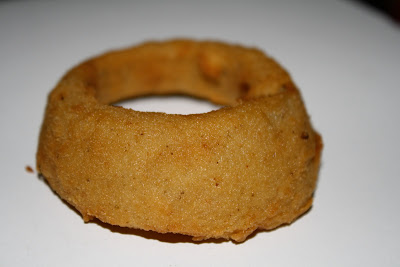 We also got an order of onion rings, which were a tremendous disappointment. They were barely warm, the breading (of which there was too much) barely adhered to the onion, and the flavor was definitely not onion-y.

It was Friday night at 8 o'clock when we'd ordered the food (in the drive-through) and it was busy. We had to wait in line for just under twenty minutes; I'm guessing our onion rings were made immediately and then sat in a cardboard box waiting for us to get up to the window. I will not make this mistake again. 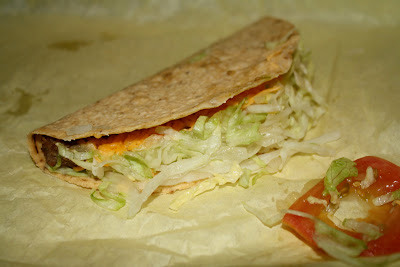 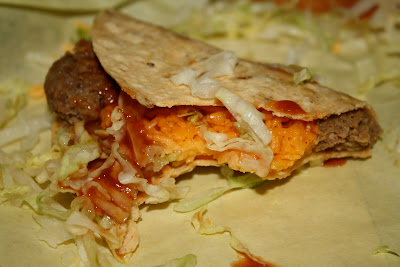 We went by my parents' house to eat the Tops food, since it's only a little over a mile away. It was Friday so that meant my dad had gone to Taco Lita and gotten a bunch of tacos. I took one of the leftover tacos (leaving part of my burger in the fridge as a fair trade). The taco was just as tasty as it has been for the last two decades. 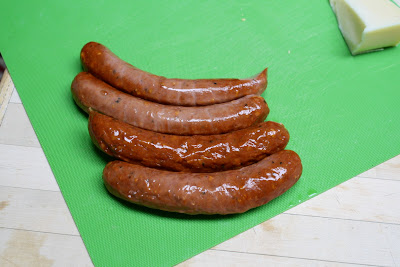 Saturday morning we had to take one of our cars to the dealer for service, so we went up to my parents' house to watch the UCLA-Florida game in the meantime. I thought it would be good to eat gator for the occasion. I went up to Harmony Farms in La Crescenta and bought a package of alligator sausage. 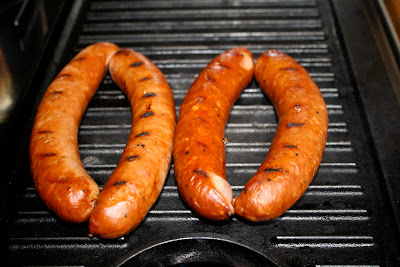 The sausage is already smoked, so I reheated it on the indoor grill for just a few minutes to warm it up. 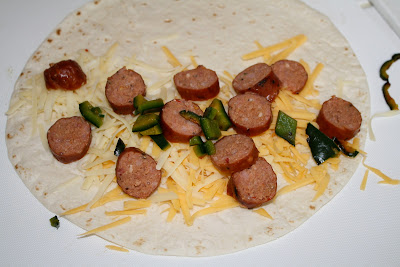 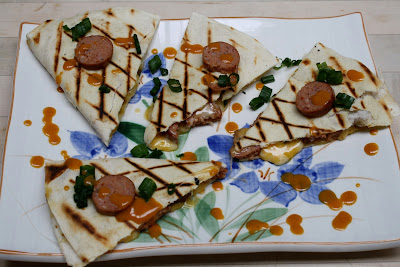 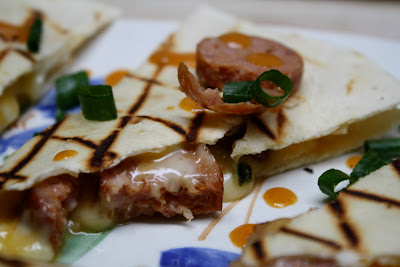 I sliced the sausage and placed it in a tortilla with two kinds of cheese and grilled pasilla pepper. Then I grilled the quesadillas for a few minutes, drizzled them with a mustard-barbecue sauce I threw together, and served them. Elizabeth and I loved the quesadillas; my parents thought the alligator was too spicy.

At any rate, the Gators beat the Bruins. 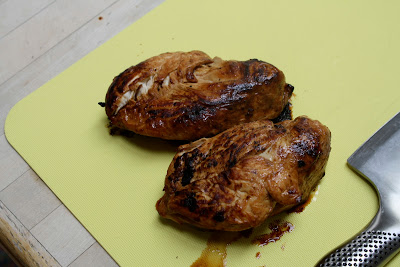 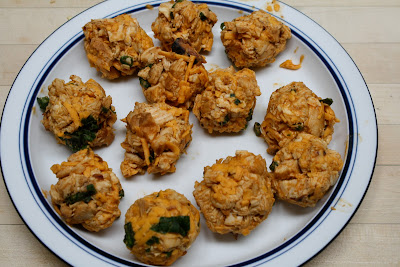 I roasted two chicken breasts from Taylors, let them cool, and diced them up. I rolled them into balls with hot sauce, chopped green onion and extra-sharp cheddar. I dipped each ball into flour, then egg wash, then bread crumbs, and I fried them in a shallow pan. 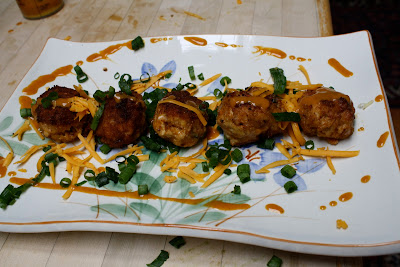 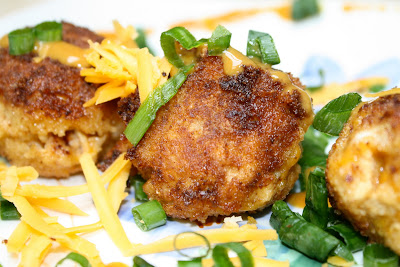 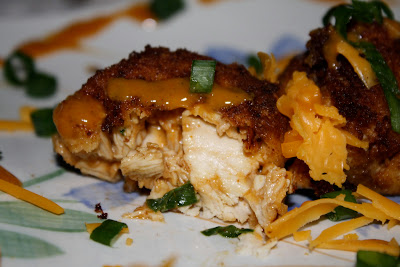 I was disappointed in my effort. I should not have done something like this while making quesadillas and trying to watch basketball. The first thing is that my preparation was pathetic: I should have diced the chicken finer, I should have used more hot sauce and cheese to bind them (a few of them fell apart faster than UCLA in the final three minutes) and I should have made sure the oil was hotter before I started frying them. They weren't bad - they were still fried balls of chicken and cheese - but they weren't very good, and they could have been. 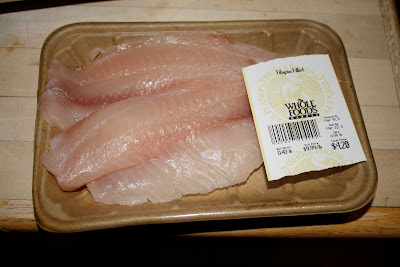 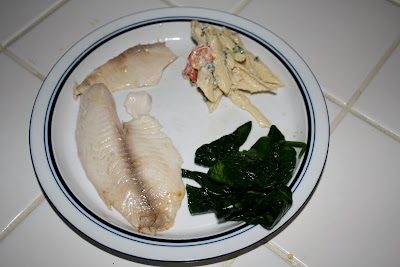 Elizabeth said we should eat something healthy for dinner Saturday. I don't know where she gets her ideas. But we went by Whole Foods and got some tilapia, one of our favorite fishes. I grilled it, she prepared some sauteed spinach, and we shared some pasta salad we also got at Whole Foods. What a terrible dinner. Nah, I'm just kidding, it was delicious. But too damn healthy. 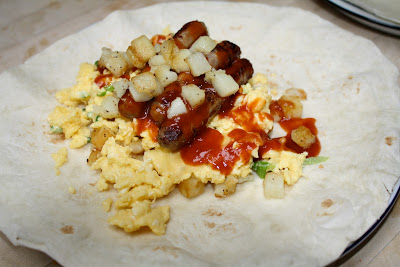 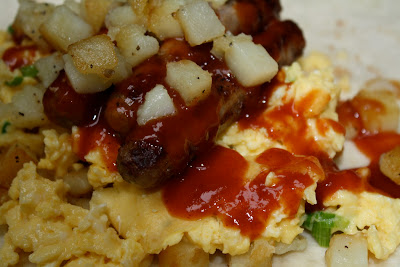 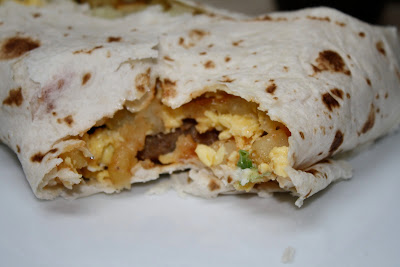 Sunday morning, I was craving a breakfast burrito. I cooked some potatoes in a wok for ten minutes (from a bag I got at Ralph's that was nowhere as good as I was hoping for) and placed them in a tortilla. I added scrambled eggs (with plenty of cheese and green onions) and some turkey sausage, then added a few more potatoes and Taco Lita hot sauce. It was a delicious creation but it fell apart quickly and I ended up eating most of it with a fork. 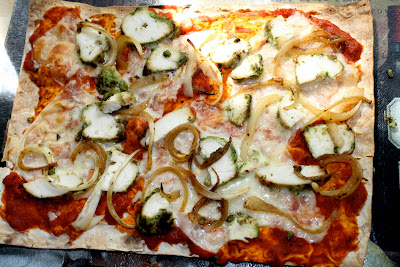 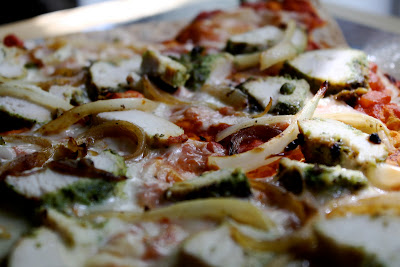 We went out for fish tacos for lunch on Sunday, but that deserves its own post. For dinner, I wanted something simple, to watch basketball on the couch, listen to the rain and relax. I cooked a chicken breast in a pan with olive oil and cilantro, sauteing some onions as well. I chopped the chicken and placed it on a lavash with roasted garlic tomato sauce and fresh mozzarella. It was an outstanding, easy dinner.
Posted by JustinM at 10:16 AM

I apologize for my healthy addition to this weekend's eats. Ha! It was delicious though.

Nom. (even the healthy stuff)