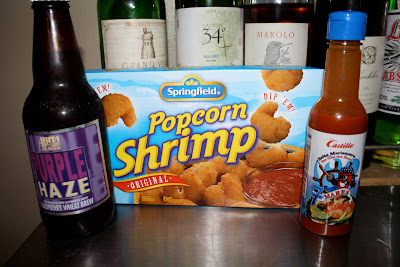 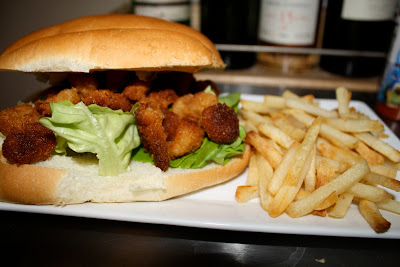 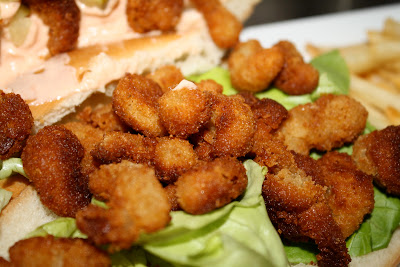 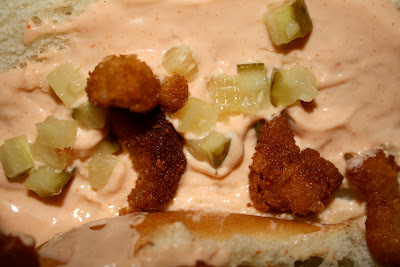 I wrote about the history of po' boy sandwiches a few months back. I ate my first po' boy almost exactly 11 years ago when I was in New Orleans for Mardi Gras. This year for Mardi Gras, I wanted to make something to celebrate the day. I considered gumbo but didn't feel like making that much effort. Shrimp po' boys seemed much easier.

I got a package of frozen shrimp that were on sale at the store and two other important things: 7 Mares hot sauce and Abita Purple Haze. The former is a hot sauce I learned about at Tacos Ensenada, claiming to go particularly well with seafood. I'm not sure why, but it does seem to complement seafood a little better than most. The latter is a New Orleans beer, the only fruit-flavored beer I like in America. (I was hoping to get Abita's Turbodog, but the store was sold out.)

On a bolillo roll I spread a mix of mayo and the hot sauce, along with some chopped pickles and pieces of butter lettuce. I fried the shrimp in a pan for about five minutes, drained off the excess oil and layered them on top of the lettuce.

It was a very good sandwich. Did it take me back to Bourbon Street? Nah. It wasn't that good. But the hot, crispy shrimp, the soft roll, and the spicy sauce were wonderful complements to each other. I offered to trade Elizabeth some beads for flashes, but the only beads I have are Lakers beads, and she said she didn't want them. Oh well.
Posted by JustinM at 10:43 AM

HAHAHA best ending to a post ever! I need to get myself to N'Awlins...everyone I know says the food is amaaaazing.

What's the best meal you've had in New Orleans?

These were delicious. I think you could have gone even a little more spicy with the sauce, even though I'm the one usually saying to ease up on the hot sauce.

Fritos: I have been to NOLA five times and have yet to have a bad meal.

Michelle: That's hard to say. The shrimp po' boy at Acme Oyster House was amazing, but really all the food I ate at Jazz Fest - and I ate a TON, like crawfish tails, Natchichitoches meat pies, fried alligator - were the best meals.

Liz: In retrospect, maybe I should have put a thin smear of mayo on the buns and then we could have doused the shrimp with as much hot sauce as we saw fit. Next time.

Did the sandwich hold together or were popcorn shrimp dropping all over the place – one of my pet peeves, an incompetent sandwich (or burrito or taco)?

I like purple beer – Great Divide from Denver has a good one.

Well, it was a two-handed sandwich to be sure, but I did not lose any shrimp. I think the spicy mayo might have glued the shrimp in place.

When I lived in Colorado I drank Great Divide's pale ale sometimes, but mostly I stuck with New Belgium's beers (although not Fat Tire, which we all called Frat Tire), with the occasional Odell's 90 Shilling mixed in.

So far the best Po' Boy I've had in the L.A. area was from Uncle Darrow's in Marina Del Rey. My mom is from Louisiana. Her gumbo is killer but she never makes Po' Boys. I should start begging for one.