Pizza Al Pollo Asada, Foccacia Verdure, and Another One Bites the Dust at Trader Joe's 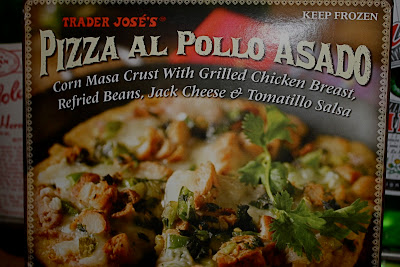 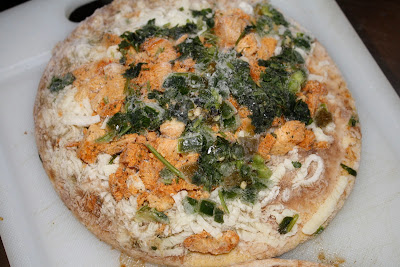 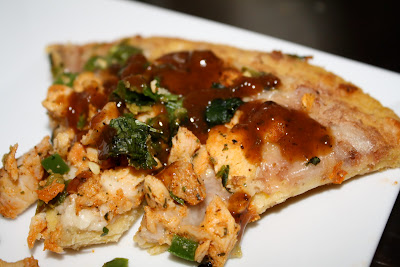 The other evening I headed down to Trader Joe's to get some things for dinner. There was a slight drizzle and it was colder than I remember it ever being in late March, so I had no desire to cook anything on the grill, and the idea of cooking something in a hot oven sounded good.

I noticed a product I had never seen before, a "Pollo Asado" pizza, promising to be made on a corn masa crust with grilled chicken, refried beans, jack cheese and tomatillo salsa. I'm always up for trying a new TJ's product and, like most of them, the price tag on this one was attractive: $1.99.

I followed the instructions at home. Unfortunately, the instructions yielded a disappointing pizza. The crust was soggy mess and at least half the toppings were cold. I reheated it a little more, but by the time the toppings were warm - not hot, just warm - the crust was burnt in lots of places (and yet still cold and soggy in others). I added some roasted pepper salsa to the slices to try to disguise the taste of the crust.

Maybe there is some trick you can figure out to make this work, but I don't think I will ever buy this again. But, as I mentioned, it was only $1.99, so it wasn't that big a deal. (If this had been one of those $8.99 CPK frozen pizzas, I would have been a lot more upset.) 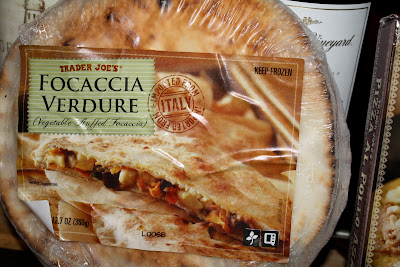 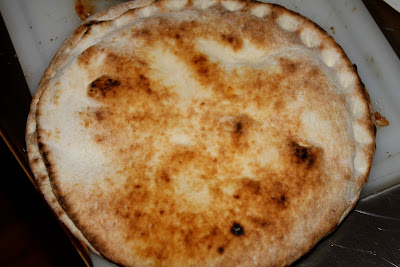 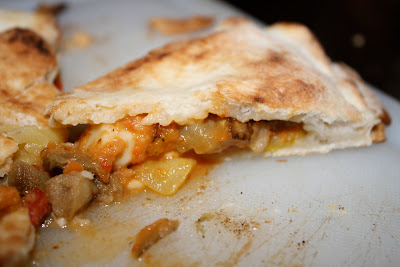 I also picked up a package of focaccia verdure, a vegetable-stuffed piece of foccacia resembling something like a pizza with crusts on the bottom and top. Think of a very thick quesadilla. I've eaten them a few times - they are better cut up and served as an appetizer than as a meal, in my opinion - and I even wrote about them a year ago.

Once again it was delicious, cooking up perfectly in less than 15 minutes. And it was on sale for only 99 cents - great, right?

And anyone who has been loyal to Trader Joe's for years can guess why.

There was only one of these left in the freezer case and it was marked down to 99 cents, so I had not hesitated to grab it. But waiting in line to pay for the groceries I started to think about that.

"Why is this so cheap?" I asked the guy at the checkstand. "You're not getting rid of these, are you?"

"Yeah, we're almost surely getting rid of them."

So, yet again another item I really like at Trader Joe's is probably being discontinued. This doesn't sting like the goat cheese empanadas or the chimichurri sauce, both of which were the best I have ever had. But it's just as annoying as the disappearance of the chicken chile verde, mojito simmer sauce, lemongrass chicken stix, and quite a few other items over the last decade.

I dream of a world in which you don't fall in love with TJ's products only to have them disappear forever. I haven't found it yet.... but that’s no matter — tomorrow we will run faster, stretch out our arms farther. . . . And one fine morning —

UPDATE 2:43PM - I was just at TJ's a half hour ago and what did I find? The lemongrass chicken stix - probably the first time I've seen them in over a year. Cool. Now if they would just get back those empanadas and chimichurri sauce.
Posted by JustinM at 10:39 AM

great gatsby! (i googled it)

Just saw on the news there is a recall for the Pizza Al Pollo Asada. Something about it being made w/ wheat. So only really a concern if you are allergic to wheat. But I'm sure your blog is getting lots of hits bcuz of it.

Yeah - I'm almost up to 18 readers today! (Only kidding, it's definitely a higher than average number for something that I cooked at home and isn't fast food.)

Have you blogged about your fav frozen pizza yet??

My favorite ever was Chicago Bros. when I was a kid, but they haven't made that for years. I'm not sure what my favorite is now... I think you might have inspired another massive post on my part. Give me a week or two.