One week shy of one year ago, to celebrate the fact that I briefly appeared on Food Network talking about Trader Joe's (and I mean briefly), I wrote about a bunch of different Trader Joe's items that I love.
Friends are frequently asking me if I have tried new Trader Joe's products. And it has always been the case that some of the most common things people are searching for when they happen upon my blog are Trader Joe's products about which I have written. So I figured I would do another post about several TJ's products that I frequently eat (and one I just had yesterday for the first time). 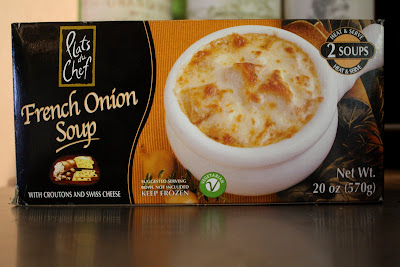 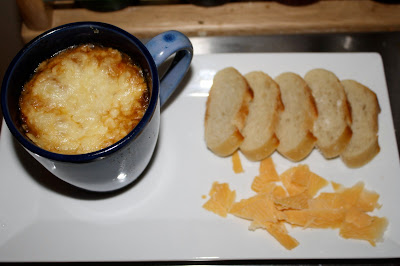 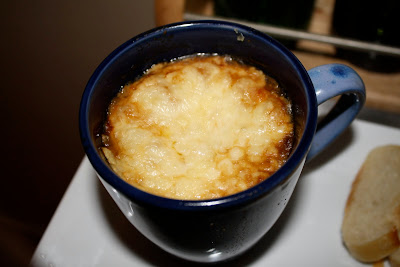 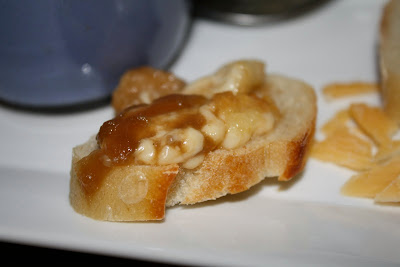 I can count on one hand the number of times I have had French onion soup at a restaurant that I have enjoyed. I have always found it much too salty, too full of broth and not enough onions or cheese. But the French onion soup at Trader Joe's is better than almost any restaurant version I have ever had. (Full disclosure: I haven't had that many at restaurants.) Once I cooked it in the microwave - a device, I've noted before, that I use probably once a month, even less frequently than I bathe - and I hated it. It tasted like salt water.

But when I prepare it in the oven, which takes about 40 minutes, it is much better. I can't explain it. A while back, before the weather got warmer, I baked a cup of the soup in the oven, melting some additional cheese on top of it for the last few minutes, and served it with some sliced bread and a few pieces of sharp cheddar. It is an outstanding, easy meal, and in true Trader Joe's fashion only costs a few dollars. I could live off of this soup in the winter. Hell, probably the summer, too. 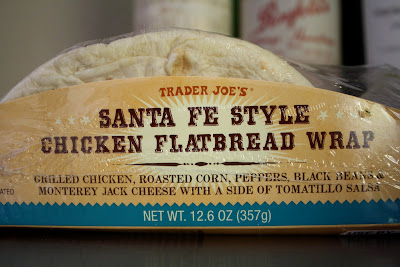 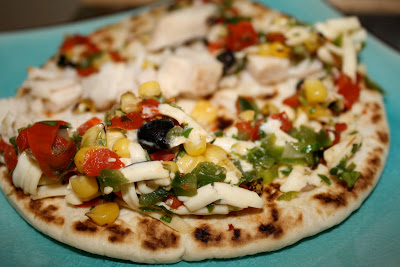 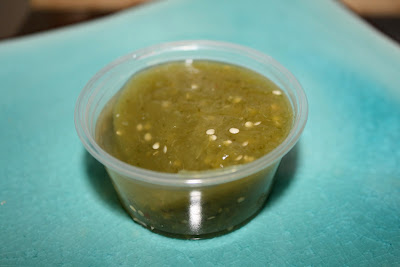 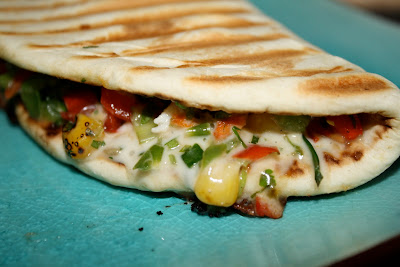 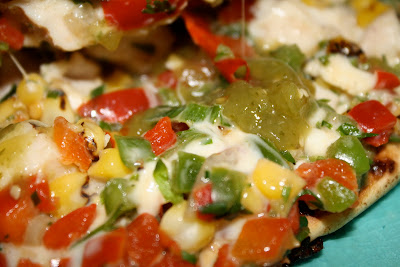 I think the "Santa Fe Style Flatbread Chicken Wrap" is brand new to Trader Joe's. Why do I think that? Because, as sometimes happens at TJ's (maybe two or three times per year), when I was checking out, the cashier picked it up, turned it over a couple times and said "Hmm, this looks good, I haven't seen it before." (The last time it happened was with the pork buns about six months ago.)
Like most of the wraps at TJ's, this one seemed substantial: two pita breads with chicken, peppers, corn, beans, and jack cheese. I'd actually picked it up thinking that Elizabeth might like to take it to work for lunch. But she told me to go ahead and eat it, that it looked like it would be too much food for her.
So I decided to eat it for lunch. As it turns out, it was too much food for even me. I intended to eat one and, if I was still hungry, eat the other. Even though it was a 90-degree day, I had no desire to eat this thing cold. Room temperature pita bread is fine with me; cold is not. And there was no way I was going to heat it in the microwave. But I didn't feel like turning on the oven, which raises the temperature of our already-hot kitchen by at least 20 degrees. So what to do with it?
Then it occurred to me: use the panini press. The thing heats up in two minutes and takes far less than five minutes to press a sandwich. So that's what I did. It turned out beautifully.
And it tasted great. It was a little on the bland side - the tomatillo salsa added only a touch of flavor to it - so I shook a few drops of Tapatio onto the wrap. Much better. (Keep in mind that I love hot sauce; it's possible that most people will not find the wrap bland at all.)
I only ate one of the pieces and I was almost full. Not completely full, but full enough that I decided I wouldn't need to eat the other. So I'm saving it for tomorrow. Which, by the time you read this, will mean today. Unless, of course, I get a better offer for lunch...
Chicken Shu Mai 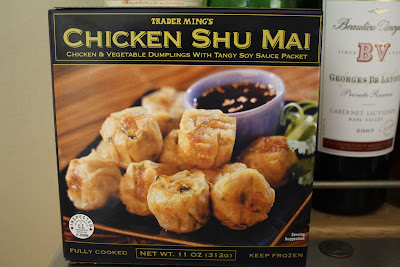 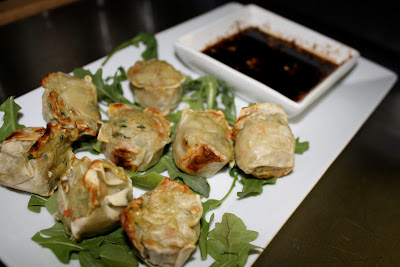 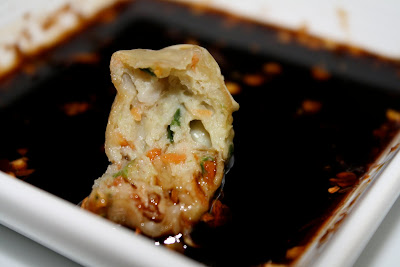 Every year that goes by, it astounds me more and more that there was a time when I hated Trader Joe's. I'm not sure what my problem is, though I can guess: I had no spirit of adventure with trying new foods. Then, after a Sunday-evening trip with a friend of mine during which I picked up a whole week's worth of groceries for $25, I fell in love with the place. Specifically their Asian appetizers and snacks.
Years later I still always seem to have a box of chicken shu mai in the freezer. It is always a great snack, large enough to serve two people. The other day I baked them in the oven - I have steamed them before but I always make them too gummy; I prefer the crunch of them baked - and placed them on a plate with some arugula, filling a sauce dish with the "tangy soy sauce packet."
I love the chicken and vegetable mix inside, the carrots and green onions. And the soy sauce is very good, not too salty and even a touch spicy. I'm not sure this would make a good meal - unless it was split between two people with some side dishes, but it is always a good snack. 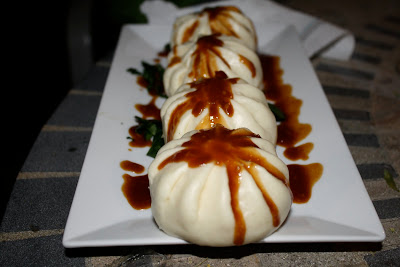 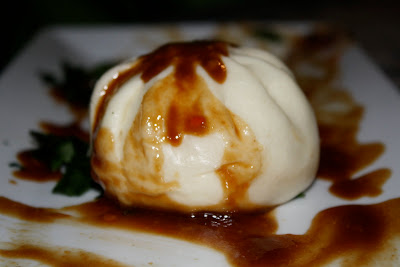 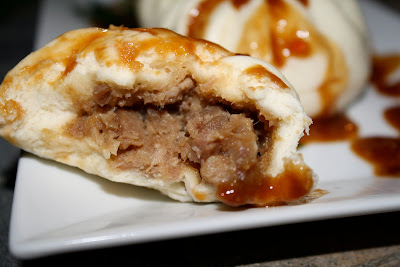 I have written of Trader Joe's pork buns before: when I first started eating them I wasn't sure how to make them. Baking them turns the dough into something that could be mistaken for a softball. Microwaving them wrapped in a wet paper towel was tricky: doing it long enough to get the interior hot usually left the exterior a pasty mess.

Then I got a bamboo steamer for Christmas and everything worked out. Steaming them is the only way to go. After ten minutes at a medium/medium-high heat, I can get them to taste like a dim sum restaurant's pork buns.

The other night my friend Tracie was over and, after we'd had a few glasses of wine, I turned my attention to making a snack. I steamed the buns and mixed up a sauce of soy, vinegar and mustard, spooning it over the finished product. They hit the spot perfectly, and went surprisingly well with a 2000 Ravenswood Cabernet.
Green Chile Cheeseburgers 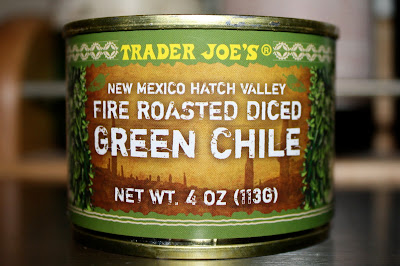 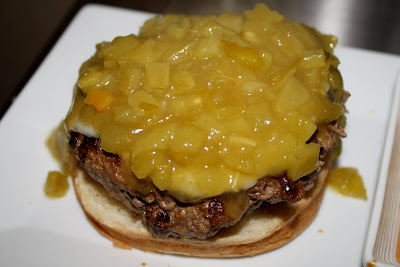 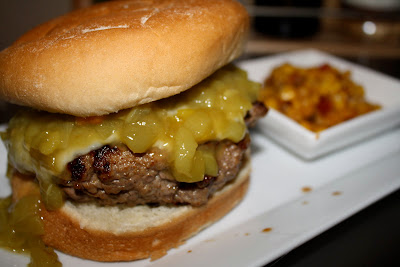 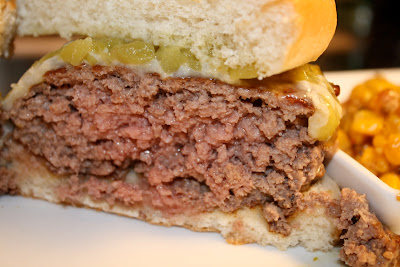 Elizabeth and I were watching one of those shows on hamburgers that mostly feature the same places and are all indistinguishable from each other. I could not tell you what we were watching if my life depended on it. It might have been Hamburger Paradise on Travel Channel; it could have been The Best Thing I Ever Ate on Food Network. Or maybe it was Hamburger America on Sundance. But then again, it could have been American Eats on History Channel.
You get the point.
At any rate, the burger they were showing at that particular moment was a Green Chile Cheeseburger. Elizabeth remarked that it looked great, and when I asked if she'd ever had one, she said no. So I decided to make one for her. It wasn't an immediate plan, but a few days later, when I came across a can of New Mexico fire-roasted green chiles at Trader Joe's, I decided that would be a good night for burgers.
With the chiles already roasted, there wasn't a lot for me to do. I formed ground beef into hunks and grilled it to medium-rare (for me) and burnt-to-a-crisp (for her). During the last minute of cooking I let slices of Swiss cheese melt on the patties. Then I added the green chiles.
It did not taste as good as green chile cheeseburgers I have eaten in New Mexico, but that should come as no surprise: the chiles on those burgers had been roasted in a drum and pulled fresh out to make my burger. Not much can compete with that. But for what these burgers were, they were very good, and I would not hesitate to recommend making one this way should you feel so inclined.
Crab Cakes & Spinach
With Champagne Vinaigrette 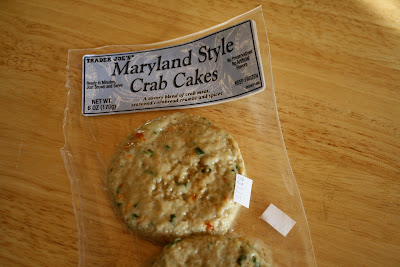 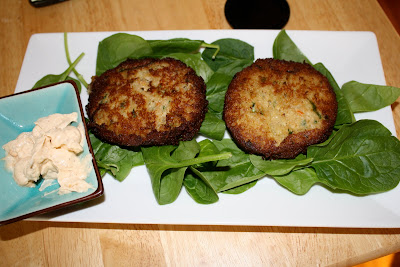 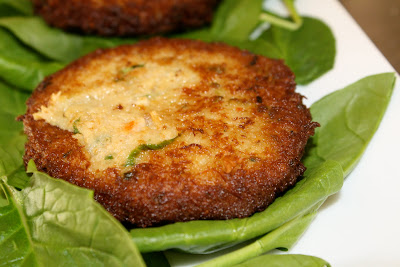 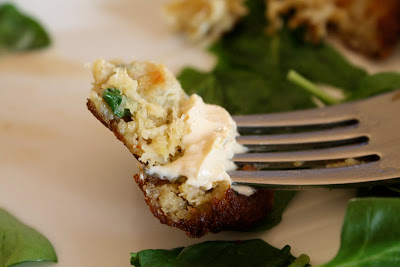 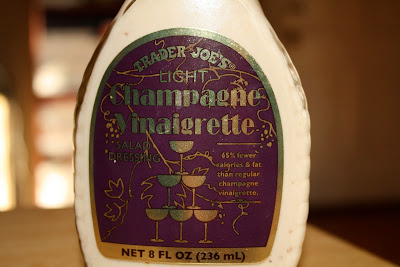 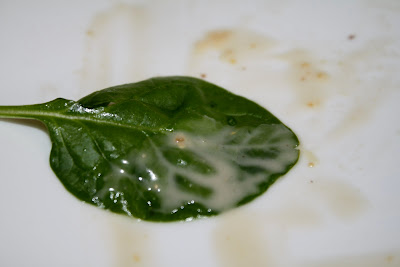 Finally, I present to you the dinner I made Elizabeth last night (I was so angry about the Angels rolling over yet again to the Red Sox - they are now 1-15 in their last 16 games against the Sox - that I had no appetite): Trader Joe's crab cakes. These are found in the freezer section and, I believe, are only $2.99 for a package of two. I always defrost them overnight in the fridge.
I heated some oil in a skillet and then slid the crab cakes into it. If the oil is hot enough, they take about 90 seconds on each side. I removed them, drained off the oil, and put them on a bed of spinach. I did not dress the spinach, preferring to let Elizabeth do that herself.
She really enjoyed the crab cakes and, predictably, as soon as I smelled them and she started eating them (with Trader Joe's tartar sauce, of course) I began to wish I'd cooked myself some. Luckily, she only ate about one and a half so I was able to finish off the second one.
And I was able to drench the remaining spinach with Trader Joe's "Light Champagne Vinaigrette," a tasty dressing that goes well over small green salads or a side of vegetables. (On anything larger, like a full salad, I think the dressing would be too distracting; it is intense with bubbly flavor.)
Well, that's it for this rundown of Trader Joe's products. Maybe I'll do another one in a few months when I have more products to share with you.
Posted by JustinM at 9:40 AM

Thank you for the TJ reviews.