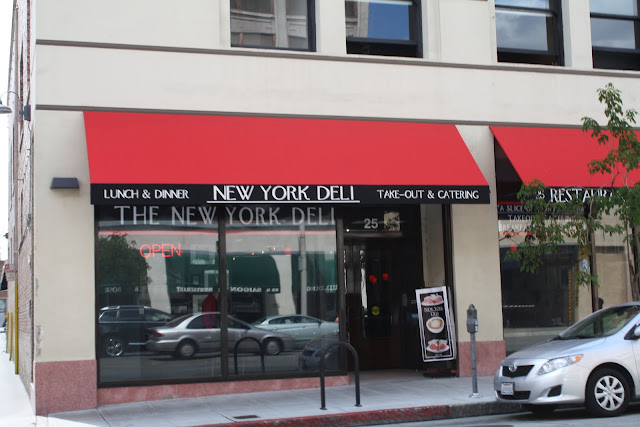 It's not often that I go out for sandwiches. Sure, every once in a while I need a Philippe's turkey dip or a Langer's pastrami, but most of the time I am disappointed with the sandwiches I get. Even well-known places in town that are defended passionately by some of my friends, I often visit for the first time and think That wasn't anything special, or, more likely, Wow, that would have been good if they had any pride in their bread.

When New York Deli opened on Raymond Ave, in the space that used to be Famima!, I didn't have any strong desire to check it out. I have written before that I am skeptical when restaurants borrow the name of a city in their title. Barbecue joints using the name "Memphis" are always a disappointment. Pizza places with "Chicago" in the title inevitably leave me wanting something better. Philly's Best was the only exception to restaurants using "Philly."

So New York Deli just wasn't at the top of my list. To be honest, most of the time when I'm craving a sandwich, I am perfectly fine with going to the deli counter at Ralph's and picking up some peppered turkey breast and Genoa salami and slapping it between two slices of Webber's bread with a few condiments. For ten bucks I can make five sandwiches that always make me happy.

I accompanied a friend to New York Deli a few months ago. We were going out for a couple happy hour beers and she hadn't eaten yet, but I had already had lunch hours earlier. So she grabbed a quick bite and I sat with her but did not eat anything myself. Her sandwich looked unremarkable and her order of fries, while looking good, could have filled a shoebox. I had a bit of a hunch that maybe New York Deli is one of those places that gives you massive portions in the hopes that you won't pay any attention to the fact that their food is absolute crap, like a certain Italian restaurant not too far away.

The other day my friend Zach was in town - if you read Monday's post, you know that he was here to celebrate his grandmother's 90th birthday. He snuck away from helping set up the party for an hour so we could grab lunch together. I suggested giving New York Deli a try. He loves sandwiches and readily agreed. 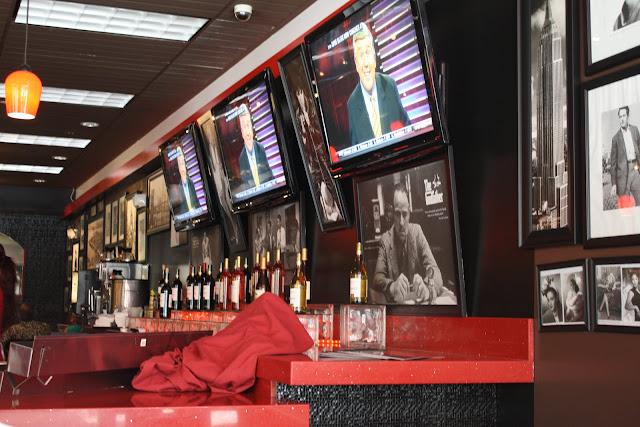 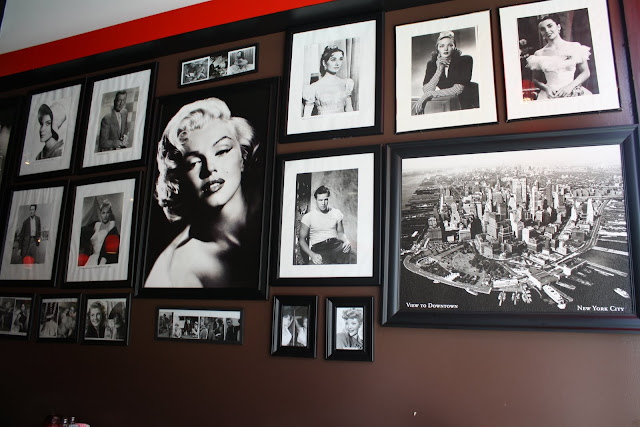 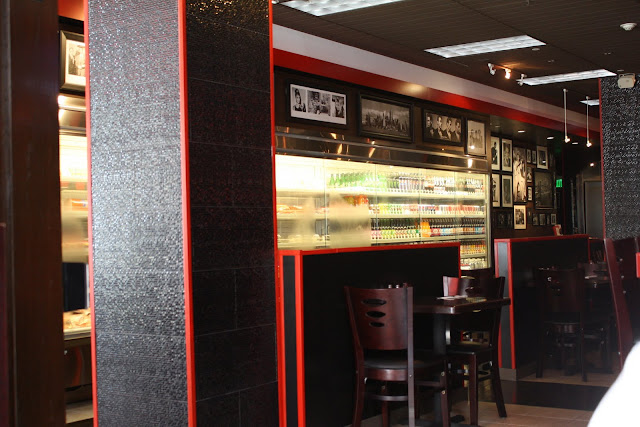 We arrived shortly before noon. There were only two other tables occupied and we took a seat by the window on Raymond. But after just a few minutes the place began filling up and by the time we left, 40 minutes later, it was packed. 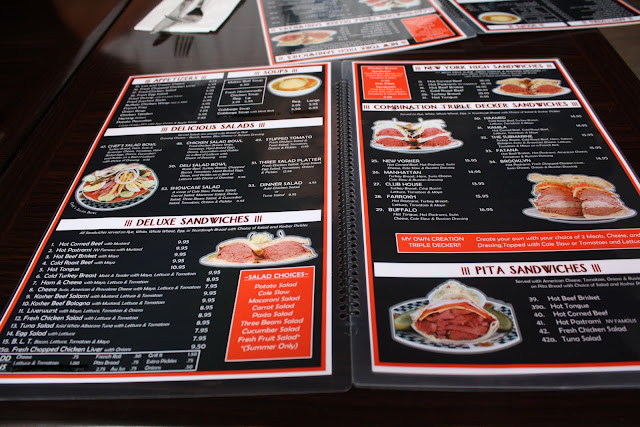 "I think we need to get the triple-decker sandwiches," Zach commented. Correctly. 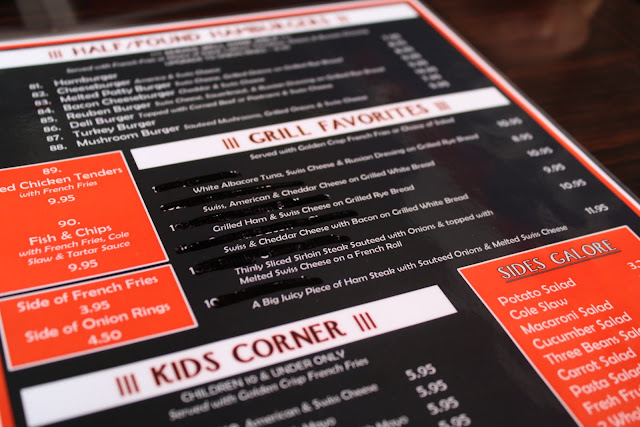 I guess the grill wasn't working. 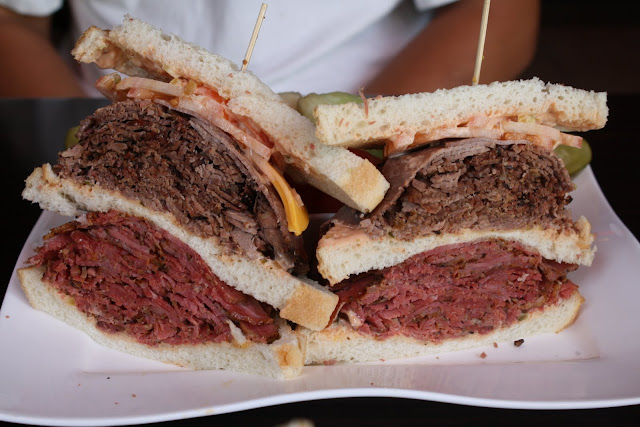 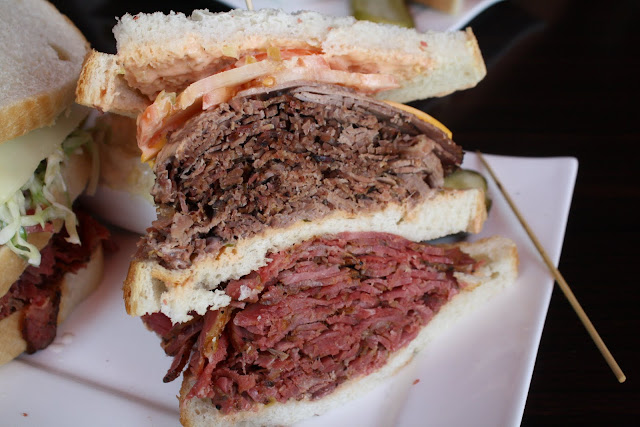 We decided we would each get a different triple-decker and share them. Zach ordered the Fatana: hot brisket, hot pastrami, tomatoes, American cheese and Russian dressing.
It was towering more than six inches high when it hit the table. It took a while to determine how to attack the sandwich. I think I bit into the corner of it first. It was good. The sourdough bread was great and I really liked the pastrami, but the brisket was on the dry side. After a few minutes I squirted some mustard onto it, which helped. 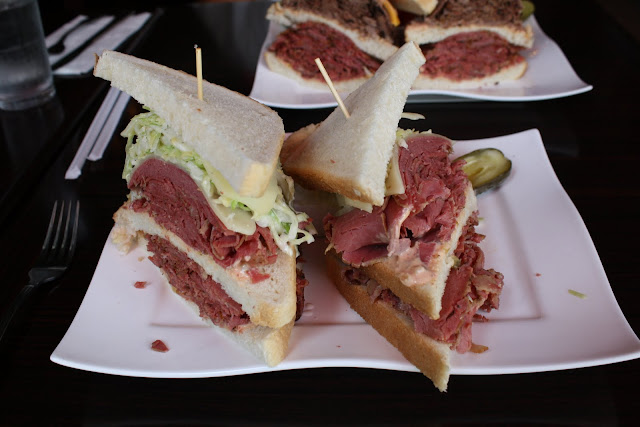 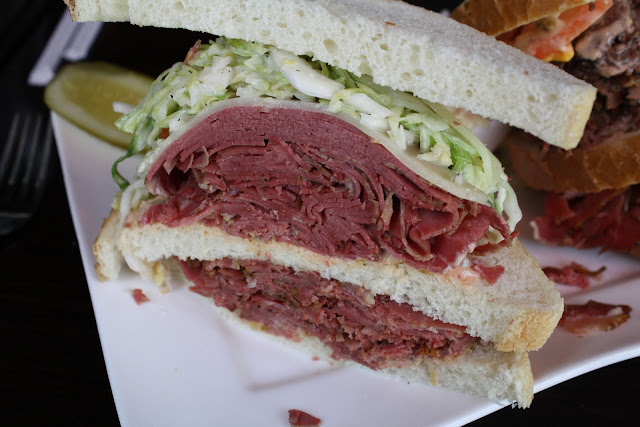 I ordered the New Yorker: pastrami, corned beef, cole slaw, Swiss cheese and Russian dressing. Now this sandwich was fantastic. Both of these meats were better than the brisket and the slaw/dressing combo worked beautifully with the salty meats. This is the best sandwich I have had in Pasadena in a long time. 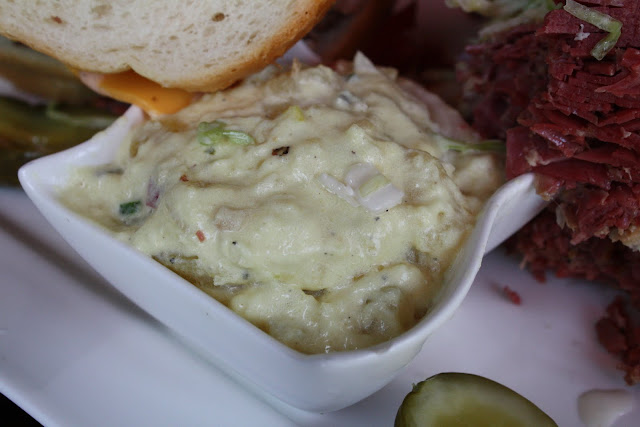 The potato salad that I had requested as my side was delicious, but very sweet. "It's much more of a New York-style potato salad," the waitress explained to me. "It's going to be sweeter than most you may have had around here."

The smallish container (not that it was very small, just tiny in comparison to the mammoth sandwiches) was the perfect size vessel for the potato salad - I'm not sure I could have eaten a lot of it. I've always been more of a mustard-potato salad lover; I can eat that by the gallon. This sweet stuff? Only a little at a time. 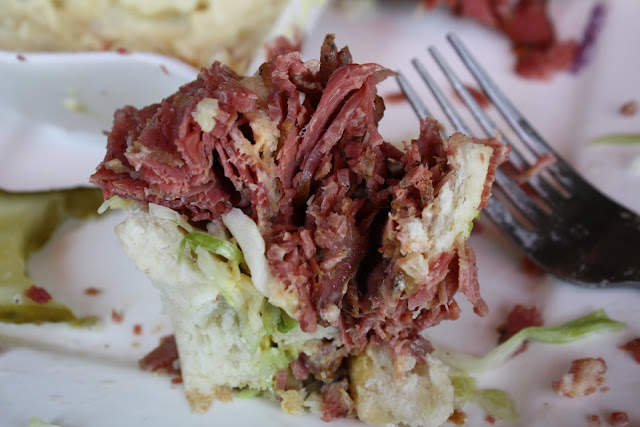 I added a bit of deli mustard to my last bite of sandwich. It wasn't necessary; the flavors of the sandwich worked very well by themselves and nothing else was needed.
I am not sure why I have avoided New York Deli, but I definitely will remember it as an option from now on. It's not cheap - each of our sandwiches were $15.95 - but the portions are huge: I took home almost half a sandwich, along with all of Zach's fruit and two giant pickles. I tried to eat it all for breakfast the next morning but couldn't manage and it took me an afternoon snack to finish it. So I guess you could say I got 2.5 meals out of my sandwich.
(That being said, Pasadena Sandwich Company is half the price and their sandwiches are almost as big. But then again, that's East Pasadena and comparing restaurants in that part of town to ones in the outdoor mall that Old Town has become is not fair.)
One day I will take Elizabeth here to get her opinion of whether or not this place is worthy of its name. In my (admittedly limited) experience with New York delis, I would say that it is. At any rate, it is certainly a nice option to have in Old Town.
Posted by JustinM at 10:56 AM

You definitely got the best sandwich! That is my standard deli choice - good pastrami is just a thing of beauty

At first we were BOTH going to get that sandwich, because we both thought it sounded the best. But then we decided we should get something else and share, just to try another kind of sandwich. In retrospect we would probably both have been happier just getting the New Yorker.

Good God y'all! Those sandwiches (good or bad) are a week's worth of fodder for me - $16.00 is not a bad price for a week's grazing. Too bad about the potato salad though, good PS can be a great meal on its own.

I went there a few weeks ago. I think they did a really nice job with the interior renovation. It feels like a nice restaurant. I probably ordered the wrong thing. I only wanted a little something. I got the Fried Zucchini. It tasted and looked very much like frozen Z-sticks which I guess should be expected but because the place looked so nice I guess I was hoping they’d make them fresh. Also it seems odd to me that they still have the beverage fridge/wall/isle thing.