Tabasco Buffalo Style Sauce & The Rest of the Weekend Eats

I couldn't eat every meal at the Crab Cooker over the weekend, unfortunately, so here are some of the other things I ate. 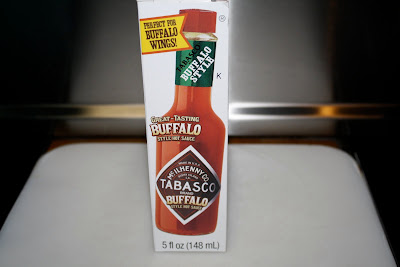 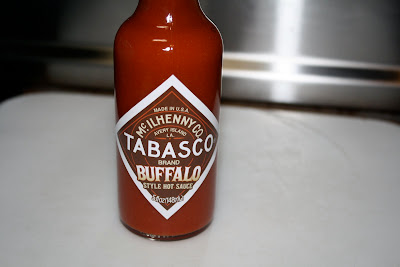 I have mentioned more than once the Tabasco Sweet & Spicy sauce I got last summer in New York and fell in love with, the flavor that apparently can't be purchased in California. Well, recently I read about a new flavor: Buffalo. I immediately went online to use Tabasco's product locator to see if I could get it anywhere around here. Nope, nothing.

So you can imagine my happiness Friday evening when I found it on sale at Ralph's. I grabbed it immediately. (This makes me wonder, though: Tabasco says you can't buy the Buffalo sauce in Southern California, but obviously you can. Does this mean you can also buy the Sweet & Spicy sauce here, too?) 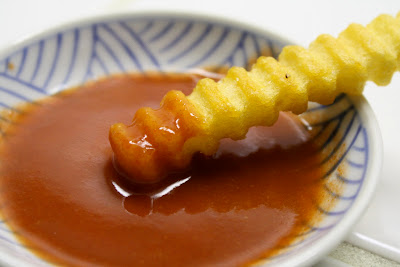 The first thing I tried the sauce on were some crinkle-cut fries. Like every other Tabasco sauce, the new Buffalo flavor is delicious. It's not very spicy but it's full of flavor. 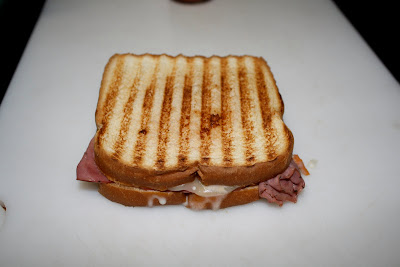 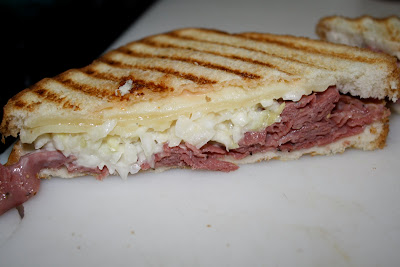 I had been craving a Reuben sandwich for a few days, but instead of going out for one I opted to make my own at home and watch baseball. I used thinly-cut pastrami, cole slaw, Russian dressing, and Swiss cheese. I cooked the sandwich on the panini press. Wow was it good. Elizabeth isn't a big fan of pastrami but she took a bite and also liked it. 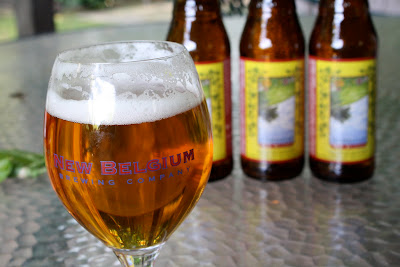 After we got back from the Crab Cooker with my parents on Saturday, we decided to have a drink on their patio. I had a Somersault and it hit the spot perfectly. So I had another. And then I had a third.

"Sure," Elizabeth said. She was enjoying Abita Purple Haze. 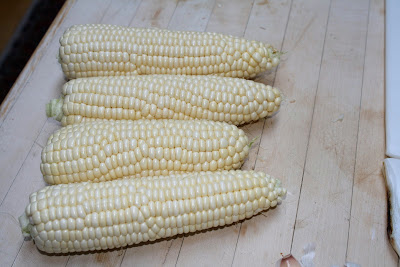 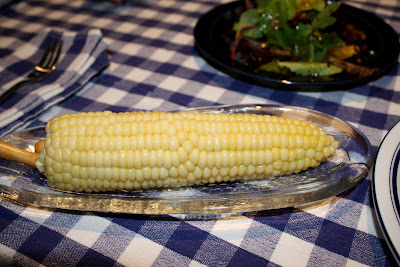 My parents had some sweet corn from the farmers market at their house, so I rubbed the ears with butter and roasted them in the oven. I had just read an article the day before than sweet corn is starting to taste great for the first time this year. And I agree, based on these ears. 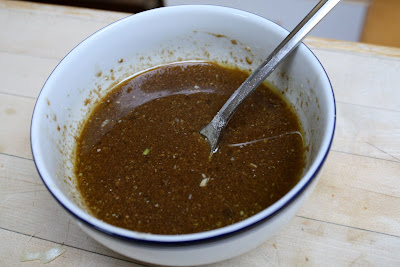 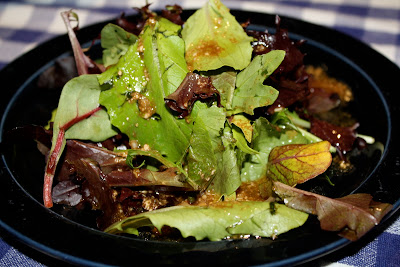 There was a bag of spicy greens from the farmers market as well, so I mixed up a dressing of mustard, garlic, Parmesan cheese, oil and vinegar and spooned it over the greens. Also excellent.

I decided to make burgers for dinner. 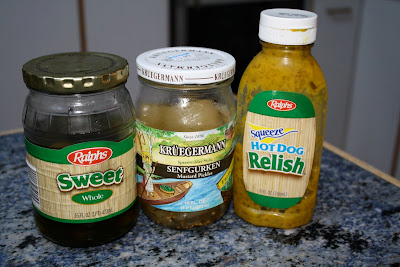 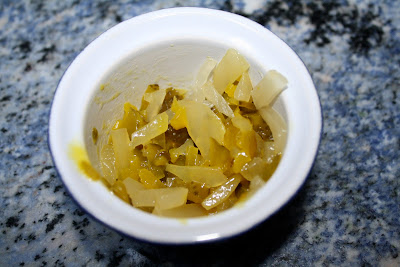 I looked in the fridge to see what kind of pickles or relish my parents had. There were three kinds: sweet, mustard, and hot dog relish. So I decided to mix them all. 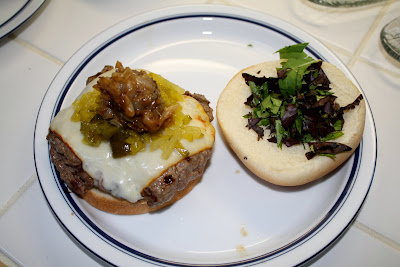 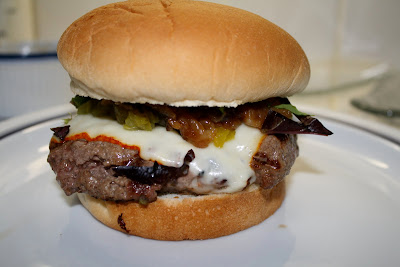 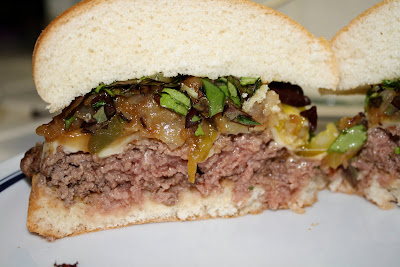 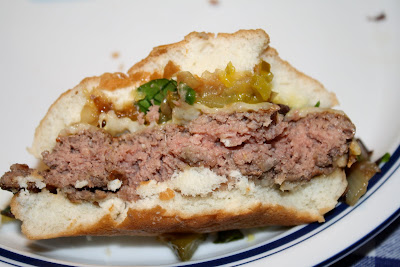 I grilled a burger patty, melting Muenster cheese on top. I then assembled it with onions (I caramelized two sweet onions, turning them into a golden paste), some of the spicy greens, and my special relish blend. It was a fantastic burger, one of the best I have made all year. 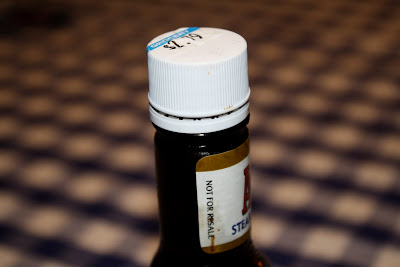 I added a little A.1. Sauce to the last couple bites of burger. Notice how the bottle says "NOT FOR RESALE" on it - it's a "Food Service" bottle, packaged for the industry. And yet there's a price tag on top. Somebody is selling something they shouldn't! But I won't say who. 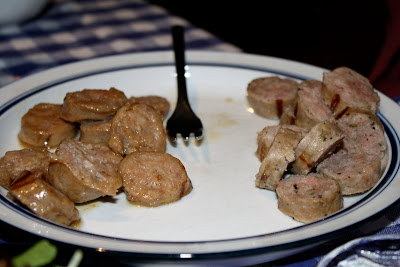 My parents did not want burgers, they wanted sausage. So I cooked them two kinds: Sweet Italian sausage that I grilled and bratwurst that I cooked in a pan of beer. 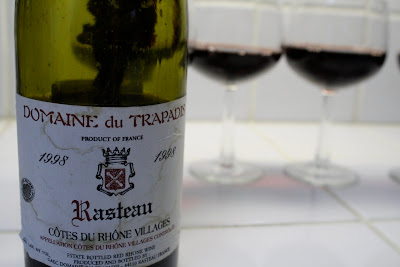 I thought about opening something very extravagant - or his bottle of Thunderbird that he has kept in the wine closet for twenty years as some kind of joke that I have never gotten -  but I'd already had a few beers so I went with something nice but much younger. A Domaine du Trapadis "Cotes du Rhones" red wine. My parents could not remember where it came from, but it was outstanding. 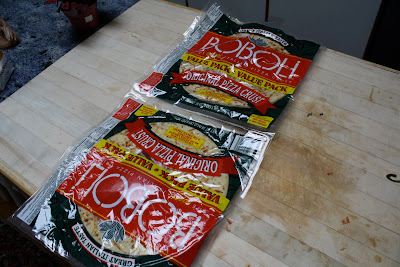 Have you ever felt really, really lazy on a Sunday? So lazy that you couldn't even be bothered to roll out pizza dough, you actually bought Boboli crust, something that you swore off years ago?
I stayed up really late on Saturday night, later than I have in quite some time. I watch the season finale of Saturday Night Live and then noticed Spy Game was coming on at 1 A.M. There are only a handful of movies that I cannot stop watching, and that is one. So I don't know what time I finally fell asleep, but it was late. And I was dragging on Sunday.
So instead of getting pizza dough and making pizza that way, I just went up to Albertson's and bought a twin package of Boboli - an overpriced, not-that-good pizza crust that I have not eaten in about a decade. 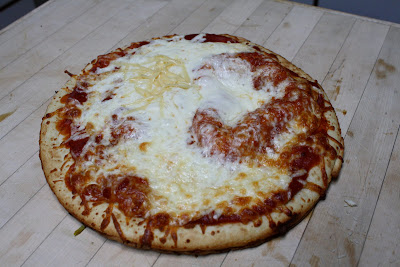 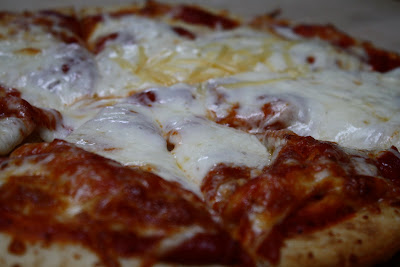 I made one pizza with just cheese. It was mostly mozzarella, but when it starting puffing up in the oven I poked it with a knife and threw some Gouda on top. It was good - I mean, it's still pizza - but all I could think was Wow, I just don't like Boboli very much. 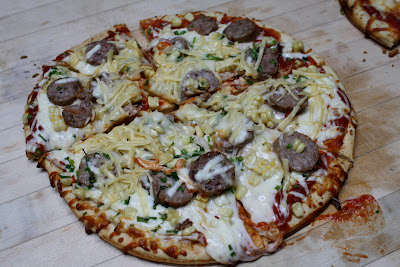 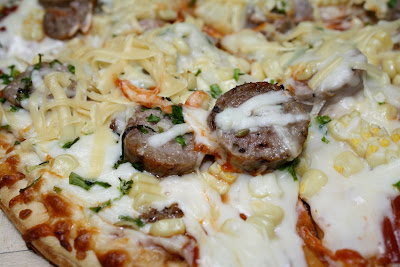 For the second pizza, I used the leftovers from the night before: sausage and corn, with mozzarella, Gouda, and chives. This was a little bit tastier than the cheese pie. 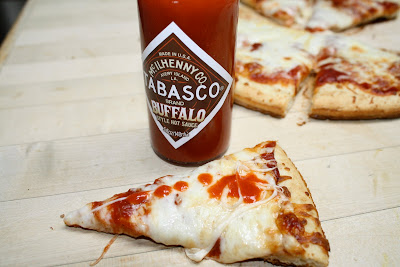 But the cheese pizza went wonderfully with the Tabasco Buffalo sauce. If I'd had more energy I would have made a Buffalo chicken pizza. But I didn't. 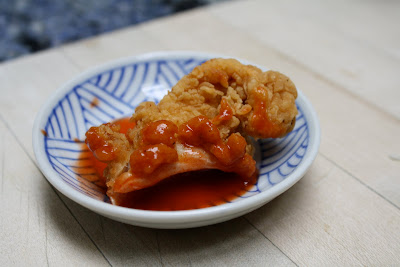 I also got two chicken tenders at the Albertson's deli so I could try one with the sauce. It was also very good. 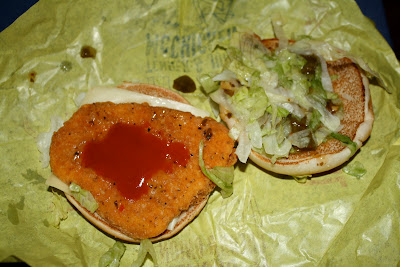 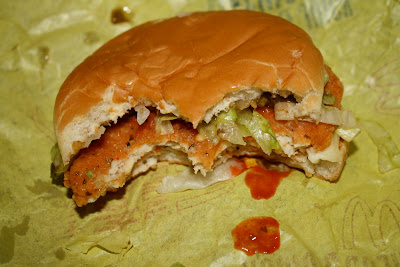 Sunday evening I still didn't have much energy, and we just wanted to sit on the couch and watch basketball (me) and cartoons (Elizabeth). So we went by the McDonald's three blocks away. I got my jalapeno-cheddar McChicken and added several slugs of the Buffalo sauce. It was good but I prefer the heat of the jalapenos on this sandwich. 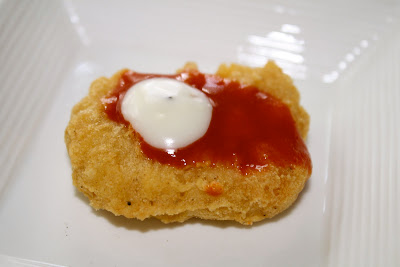 Did I roll a McNugget in the sauce and add a dollop of blue cheese? Why yes I did. Did it taste like a Buffalo wing? You know, it kinda did.

That's all for the weekend. I went through half the bottle of Buffalo sauce in 48 hours. But, unlike the Sweet & Spicy sauce, I know where I can get more.
Posted by JustinM at 10:11 AM

I stumbled across your blog last week and am so impressed by your photography (and your writing is great too!). May I ask what camera you are using? I just want to reach into my monitor and take a bite of all that food but then i sadly realize, I can't!

Hi Augustina. Thanks for the compliments. Since February I have used a Can Rebel XS - basically the low-end of Canon's DSLRs.

For the first 2.5 years of the blog I used a succession of point-and-shoots (two Sony Cybershots and a Canon Powershot) but I wanted to step up to something a little fancier, a camera that I could learn/grow with.

It may be the "low-end" but I don't see my needs or skills ever necessitating anything fancier or more expensive. I'm sure I'll get a different lens at some point, probably something with a better macro lens than the lens that came with the camera, but that's it.

I'll never understand why that movie didn't do better. It came out only two months after September 11th, so maybe nobody was in the mood to see something about CIA moral ambiguity?

At any rate, I love the movie.

I agree this is the best burger you've made this year. It was fantastic.

Motivated by a coupon in the Sunday Times, I too went in search of the Tabasco Buffalo sauce a couple of days ago. Von's did not have it, so I found it at Ralph's as well. Unlike your qualified test at home, with various food types, my test was at an intersection on Huntington. I splashed some into the palm of my hand and very much enjoyed it. It is a very good addition to their stable of flavors.

Stephen, not fifteen minutes ago I carved a roasted chicken, placed some meat on bread and topped it with greens, pickles, a slice of Muenster cheese... and several slugs of the Buffalo sauce. It was great.

That sounds AWESOME. Your sandwich reminded me that years ago, KFC had a very good buffalo sauce in small packets that was quite comparable to the Tabasco Buffalo sauce. Although I am not 100% sure, I believe that their formulation has since changed.

I think that the green Tabasco sauce deserves a feature as well. Your posts always make me soooo hungry, especially late at night! :)

Irina, that's my LEAST favorite Tabasco sauce. It's not spicy like the original/habanero/chipotle and it doesn't have any great flavor like the garlic/Buffalo/Sweet & Spicy sauces.

But maybe I should pick up all the sauces and do a comparison.

Thanks, Bryce. You can also get a personalized gallon of it from Tabasco.com. I just would rather go to a store and pick it up. I can't explain.

The thrill of the hunt.