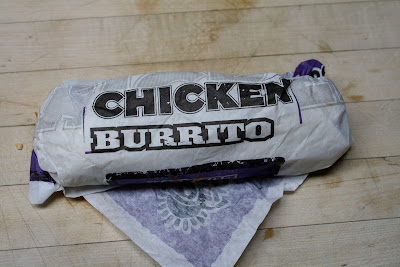 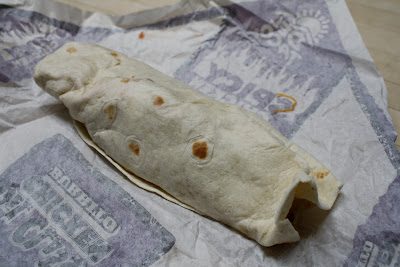 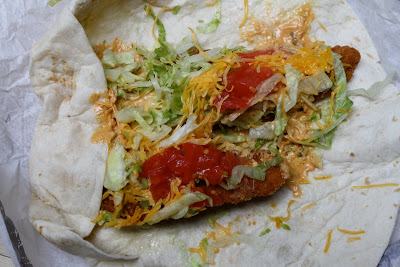 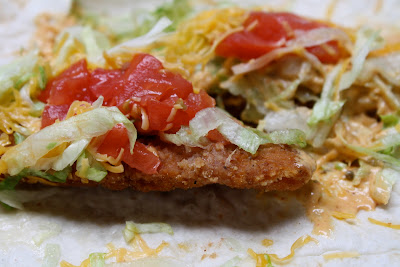 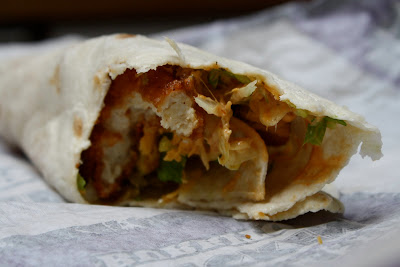 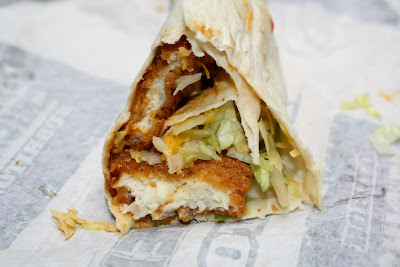 Last September I tried Del Taco's "Big Fat Crispy Chicken Taco" and, while I liked the spicy sauce, I thought the taco was pretty average: the chicken was overcooked and flavorless. Del Taco almost always comes out with great promotions, but that wasn't one of them. The taco disappeared after a few weeks and I was sure it was just a failed idea that we would never see again.

As usual, I have no idea what I'm talking about: a couple of weeks ago, the Big Fat Crispy Chicken Tacos returned. And this time, they were accompanied by a burrito version. Now, why would I possibly think that if I did not like the taco I would like the same ingredients stuffed into a tortilla and called a burrito? I dunno.

But I still decided to try it. So I went by Del Taco and waited in line for an inordinate amount of time before receiving my food. (Two hours later my brother called me to report that he was getting a root beer float and some mac & cheese bites at Del Taco. "This is not the Del Taco of my youth!" he said, somewhat dramatically. At any rate, he stayed on the phone with me while waiting for his food; he waited less than 60 seconds, about one-tenth the time I did.)

The first thing I noticed were the bright red, fresh tomatoes sitting on top. Luckily for me, they were all in a neat little pile: easy to remove, which I did. In doing so, I touched the chicken. I could tell it wasn't going to be very good.

One bite confirmed that. The chicken was overcooked all around and inedible in a couple of rock-hard places. I pulled off those offending scraps and resumed eating. The chipotle sauce was delicious, I have to say that. But overall these were a disappointment, just like the Big Fat Crispy Chicken Tacos were last fall. You know what they say about doing the same thing and expecting different results.

So if you want to try these, I recommend getting the tacos. Well, I don't recommend getting either, but you know what I mean. I love Del Taco and their promotions are usually great, but these Big Fat Crispy Chicken ideas are a strikeout.
Posted by JustinM at 10:50 AM