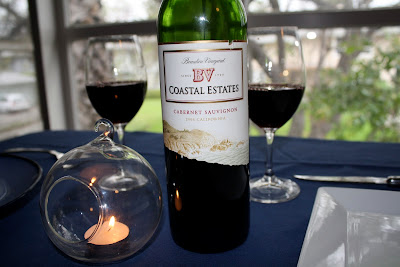 I emailed Elizabeth on her birthday and asked what she wanted for dinner. "We went out Saturday, we don't have to do anything special," was her response. "Want to just pick something up and be lazy at home?"

I responded that that sounded good, but I had another plan. I set the table and my friend Tim was nice enough to give me a bottle of BV cab. 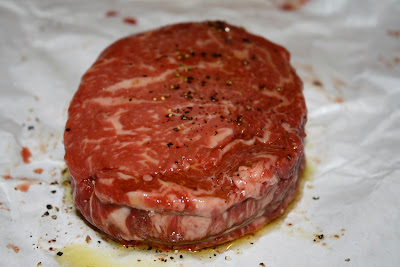 I got a USDA Prime Spencer (or Delmonico) cut of ribeye: similar to a filet mignon but richer and more moist. I rubbed some oil and cracked pepper on it and let it rest out of the refrigerator for two hours. 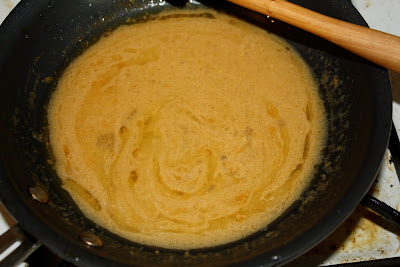 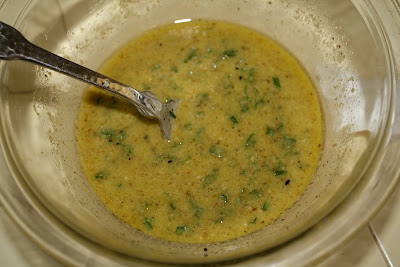 I made two sauces: a whiskey-butter sauce that I heated in a pan and a green onion-mustard-black pepper vinaigrette that I mixed together and let sit at room temperature. 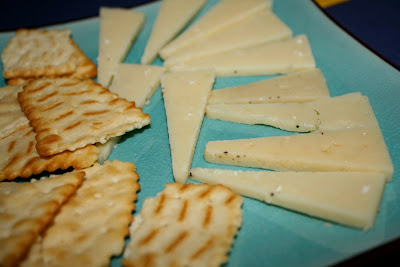 When Elizabeth got home I started the cooking process but gave her one of her favorite cheeses to tide her over: Trader Joe's Toscana with black pepper. 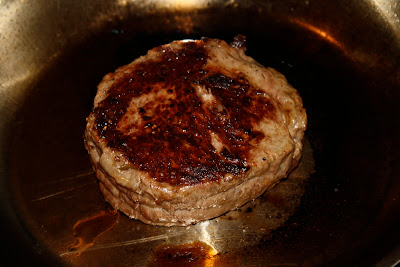 I heated a stainless steel pan in the oven at 500 degrees for quite a while, then put it over high heat on the stove. After a minute I slapped the oiled steak onto the dry, blisteringly hot pan. It started smoking and sizzling immediately, an impressive site.

With only a minute on each side it browned and formed a bit of a crust. Then I put the whole thing back in the oven for four minutes, flipped it and let it sit for another two. I removed it, wrapped it in foil, and let it rest five minutes. 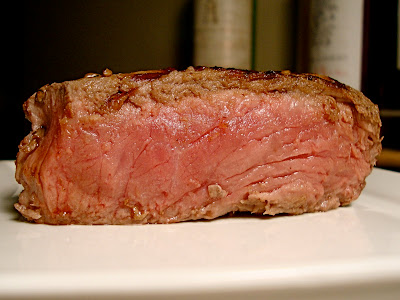 Yes, this will do. 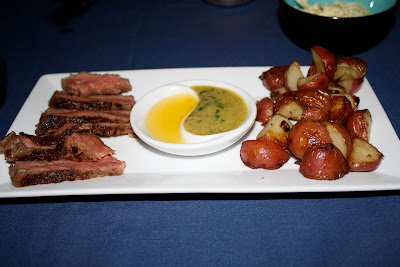 I roasted some quartered red potatoes in the oven with garlic and olive oil. I meant to take a picture of them pre-cooking, but I was doing a lot of other stuff and forgot. Whatever. They're potatoes, I'm sure you know what they look like. 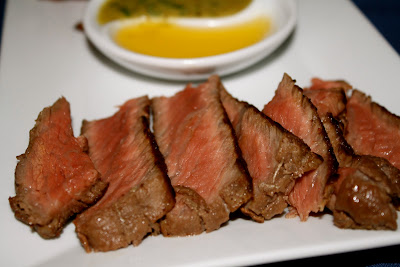 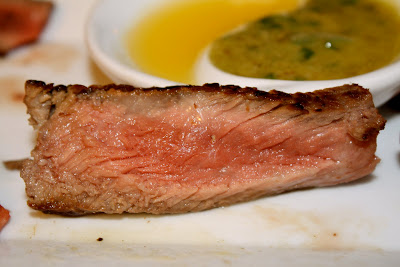 The steak was almost perfect. It needed only a fork to cut it. Prime steaks may be pricey but the quality is appreciable: this melted on the tongue like butter. 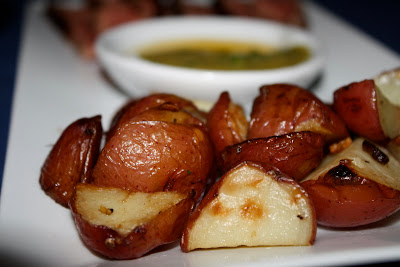 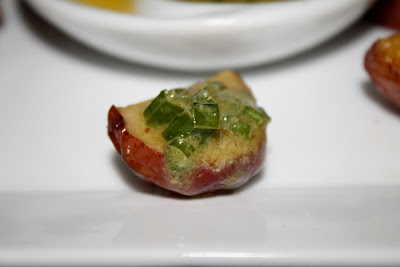 The potatoes were great, too. I have a particular hatred for undercooked oven-roasted potatoes. Far too many times I have been served potatoes out of the oven so frustratingly close to perfect, just undercooked enough to make their centers solid. I am always sure not to undercook potatoes when I roast them. And as a consequence, I often overcook them. (Still, I'll take that over undercooked every time.)

But on this occasion, I pulled them out just in time. Most of the pieces were browned and some were not, but all were delicious. And they were made even better (in my opinion) with the mustard sauce.

I made this dinner for Elizabeth, but I think I loved it even more than she did.

And Joey loved the steak most of all: 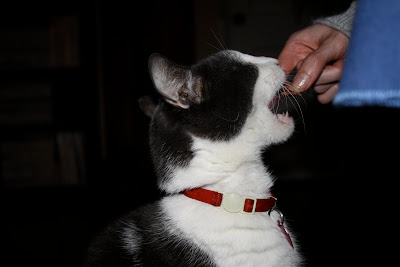 You say "almost perfect" on the steak. How could it have been made better?

I've never tried to preheat the pan in the oven. I'm going to give this a shot!

TJ: I don't think I will cook it this way again. I will go back to my tried-and-true way: cooked on the indoor grill with a slab of butter melted on it.

Anon: Every once in a while I liked to browse recipes and pick and choose what I feel like doing. This sounded cool, but... see above.

Next time you get a much better bottle - that steak deserves it (you two, too).

Thank you for the birthday wishes! The steak was amazing, the butter with whiskey was drinkable, and the potatoes were perfect with the mustard sauce. And Joey was one happy kitty!

Ahh happy birthday to Liz! Great meal here.. I am no meat eater but that piece of red looks amazing. Curious about the BV - was it an 2007 cab? Hope so! I will have to try the Toscana pepper from TJ next go 'round.