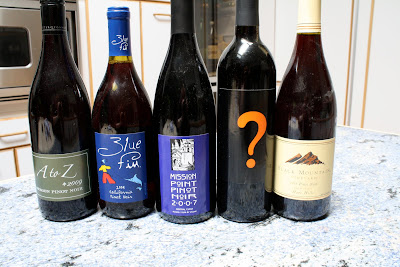 Before coming over to my parents' house, my mom had asked me to pick up 6 bottles of "A to Z" Pinot Noir, an Oregon pinot that she likes that is sold at Whole Foods. Now, I have had it several times and it is fine, but it is not that good. And at $20 per bottle, it is certainly no bargain. I picked up two bottles for her and came up with an idea: we would do an informal, blind tasting to see if there is a pinot that my mom might like more than the A to Z.

Later in the day I went by Trader Joe's and picked up three bottles of less-expensive pinot as well as a bottle of Oreana ?, a Santa Barbara red table wine that my friends and I have enjoyed over the years. 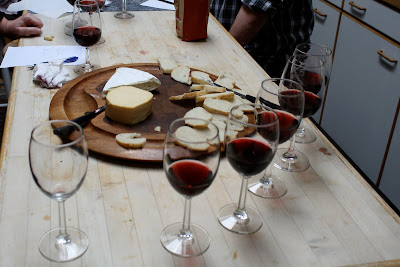 I put the wines in bags and numbered them.

"Are you including the A to Z in the tasting?" my mom asked.

My parents, Elizabeth and I and our friend Carla all tasted them. We made notes and ranked the wines in order of our least-favorite to favorite. I tallied the scores. Would you like to know the results? Okay. 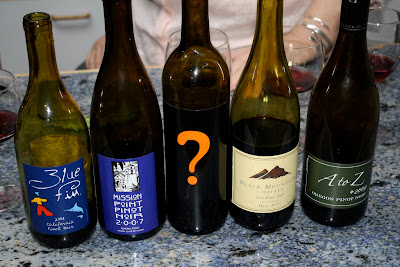 #5 (Dead Last): The A to Z. I know I said I didn't include it in the tasting. I lied. At $20 per bottle, this was by far the least popular of the wines. My dad, mom and I judged it our least favorite, Carla her second-least favorite, and Elizabeth thought it was right in the middle of the 5.

#4: Black Mountain. This was a $5.99 bottle, one that I know I've had somewhere before - although I can't remember where - but I do not think I will ever buy this again. TJ's has too many good wines to bother with this one. It was the least favorite of both Elizabeth and Carla.

#3: Oreana ?. Another $5.99 bottle, everyone detected cherry flavors, and extreme sweetness that mellows after a few minutes. I will certainly continue to buy this wine.

#2: Mission Point. My dad was the last person to finish his scoring. In fact, he took longer than everyone else put together. He takes this stuff seriously. So, while waiting, I tallied up the the scores for the rest of us and realized two wines were tied for first. My dad's voting would determine the winner.

As it turned out, he did not care for this wine. He correctly identified that it was from the central coast, but noted that it is just "much too young" to be taken seriously. And I suppose he has a point, though everyone else liked it more than he did (his was the lowest of the scores this wine received) and it was only $8.99 for the bottle. I would have no trouble purchasing this again, if it weren't for one fact:

#1: Blue Fin. This was the top choice for both my mom and dad, and the second-favorite for me, Carla and Elizabeth. And it's only $3.99 per bottle, the cheapest of the wines we tried. The most common words used on the notes were "mellow" and "light."

My mom was blown away by the results, not just because the pinot she claimed to really like finished in last, but because the clear winner was something that costs one-fifth the price. The six bottles she asked me to get at Whole Foods would have cost $120. Six bottles of Blue Fin, that we all liked much more, would have cost $24. 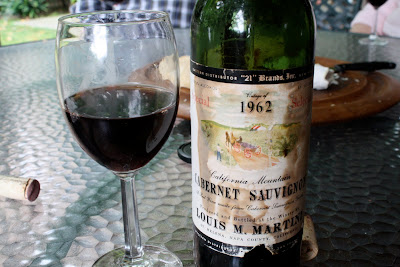 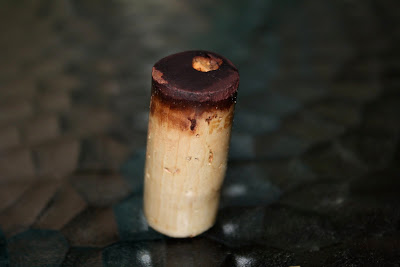 After our informal tasting, we moved out to the patio and my dad opened a bottle of 1962 Louis Martini Cabernet that he said looked like it might still be good. He was particularly impressed with the condition of the cork. And it was still good, a little harsh on the nose at first but mellowing significantly as it breathed.
Posted by JustinM at 11:43 AM

There's nothing like a blind tasting to dispel preconceived notions about one's "favorite" wine.
I've seen this happen a gazillion times beginning when Jordan Cabernet was the knee-jerk choice for Pasadena yuppies. It ALWAYS finished last in the blind tastings (much to my delight)!
Once I gave a case of inexpensive Merlot to a couple for a charity dinner they were having. They refused to serve the wine because they though it wouldn't be good enough. I later served it to them in a blind tasting among some heavy-hitter Merlots - they chose my cheap stuff as their favorite!
How's that crow tasting, eh?

My only fear was that the A to Z would win (and that I would rank it #1) and my mom would say "See, I told you!" And I would have felt foolish on insisting that she could get a better wine for less money.

But I never, ever would have expected it to come in last. Nor to have a $3.99 wine be the winner. I almost didn't buy that one because I thought it was too cheap. We're all clowns in the long run.

when i saw this post and saw the blue fin i got all excited. i love blue fin petite syrah..always pick up a few bottles at trader joes. in terms of oregon pinot noirs... ill be honest, i havent found a decent one yet and the going rate is about $20 a bottle. the only pinot noir worth that much that iave had is cambria (from california) which you can find at trader joes also. excellent post here!

Thanks. I don't mind spending $20 for a bottle that I really like, I just think there are a lot of wines out there that are affixed with that price tag that just aren't that different from the much cheaper Trader Joe's wines.

Cambria is actually my least favorite winery from the Central Coast, though their Pinot Noir is the least offensive of their wines to me.

Good idea, wine tasting.
I like the ratio of bottles to guests.
The thing I’ve found with wine though is that it’s not always about comparing best tastes. Some of the process for me is getting to know the wine over time, a glass, a bottle. A sip here and a sip there, for the untrained like me, often leaves me voting on the cheapest, and as you mention, “mellow” and “light”est. Which might taste the best at that moment but may not indicate the best wine. Wine being something deeper. Some wine for drinking at parties, some for drinking alone, some for drinking on the deck at Ventana in Big Sur at sunset…

But, obviously, this wasn't a serious wine tasting, just a fun thing to try to see what other, cheaper Pinot options there are for my mom when she just wants to have a glass of wine at the end of the day.