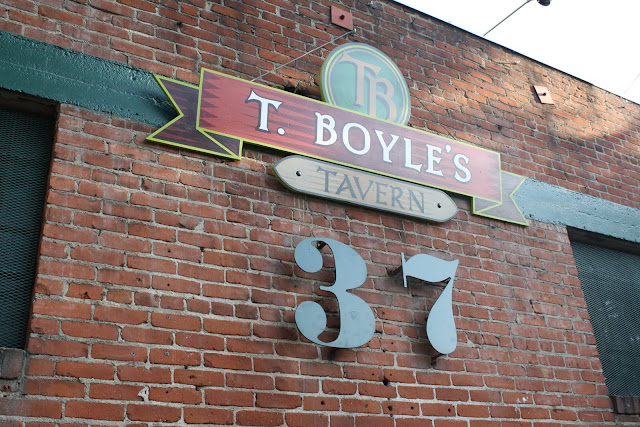 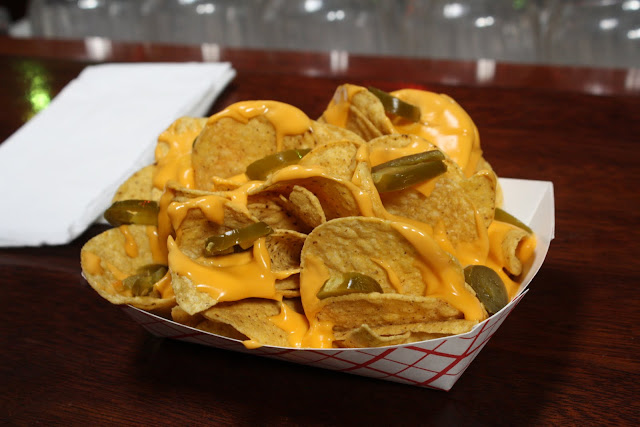 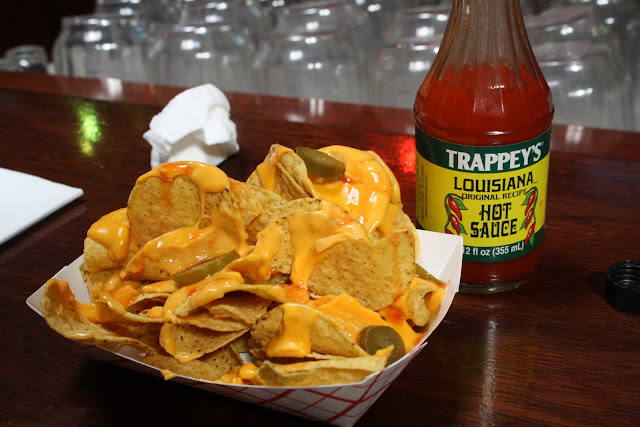 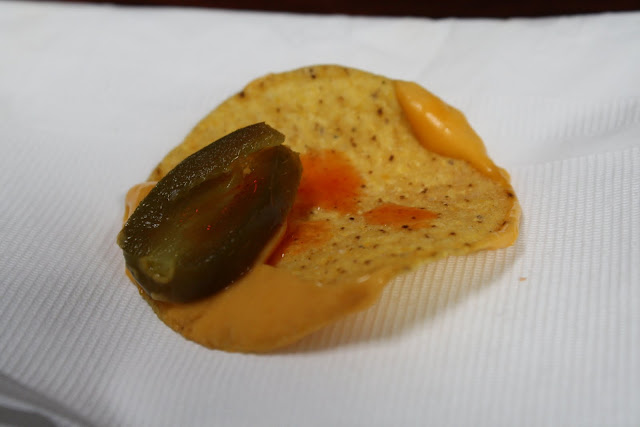 Friday afternoon I was up on Lake Ave doing some things, when I got a text from my friend Tim that he was at El Taquito getting tacos - right across the street. "I'm going to T. Boyle's to meet up with my sister-in-law, wanna come?" he asked me. I said I would go for a bit.

Our friend Carla met up with us, too, and we felt like getting a salty snack: we ordered nachos with jalapenos. They were nothing more than your typical ballpark nachos - we saw the owner carrying a giant bag of chips and two cans of nacho cheese sauce into the back right after we ordered; "It looks like dog food," Tim added. - but still a decent snack.

The surprise was the Trappey's Louisiana Hot Sauce. I know I've had it before in the past, but I had no recollection of how delicious it is. Carla and I liberally doused it over the nachos. I considered getting a shot glass and pouring the hot sauce into it. Mostly because I thought it would be funny, but a part of me actually thought the sauce would be tasty enough to drink. 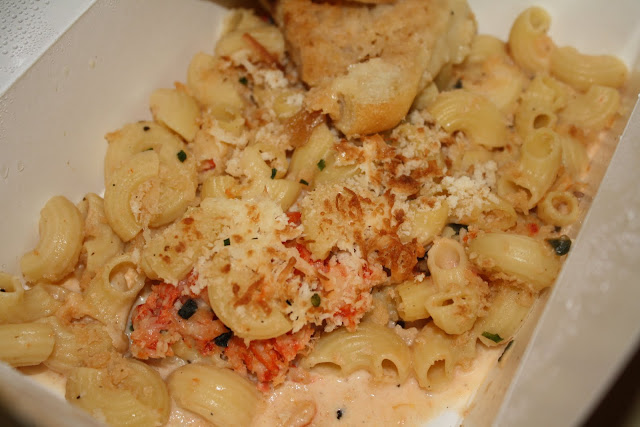 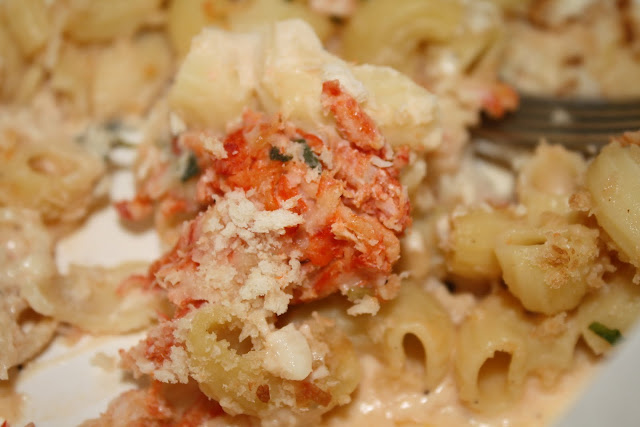 When Elizabeth got home from work she showed me her lunch leftovers: lobster mac and cheese from Larchmont Grill. We both grabbed forks and started picking at it. It was delicious, even cold - there was plenty of lobster meat and I could taste cheddar and Fontina. (According to the website, there is white cheddar, Fontina, mascarpone and Parmesan in the dish.) 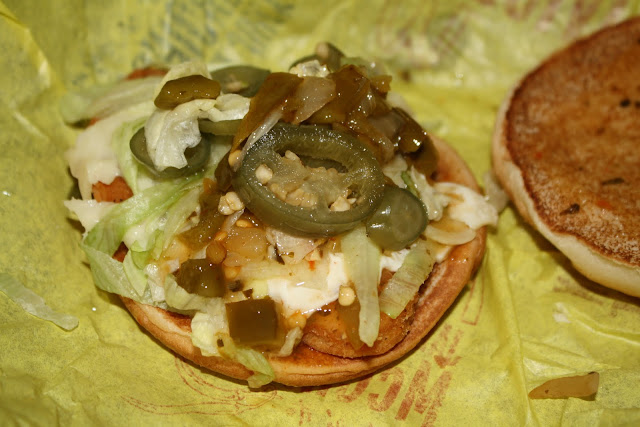 After running a bunch of errands Friday evening, we were planning to eat leftovers for dinner - the lobster mac and cheese and a massive piece of sandwich I had left from lunch (you'll see where tomorrow). But I was craving something spicy, and we happened to pass right by a McDonald's. One month ago I wrote about the jalapeno cheddar McChicken, something I liked very much. But I didn't think it was spicy enough. I went back a couple weeks ago and bought two of the sandwiches, combining the toppings from both onto one sandwich. A friend pointed out that I could just get some jalapenos and make my own version of the sandwich.

So I got a container of pickled jalapenos at King Ranch - I mean Baja Ranch; it's gonna take me years to stop calling it King Ranch - and sliced up one particularly large jalapeno. I added it to the McChicken. Now we're talking: it was the perfect amount of heat. I sent a picture message of it to my friend, telling him how great it was.

"You're easy to please," he replied.

I've been called worse before. 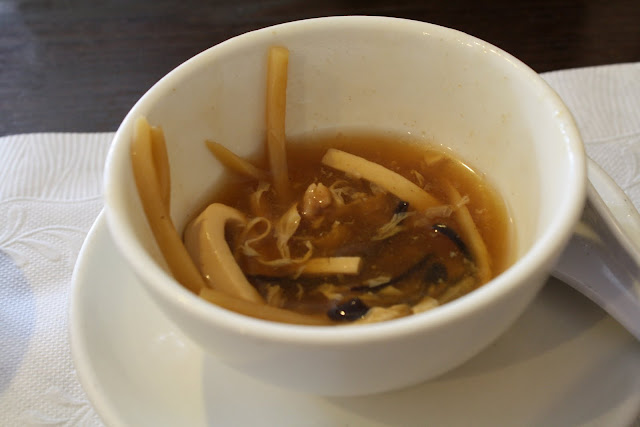 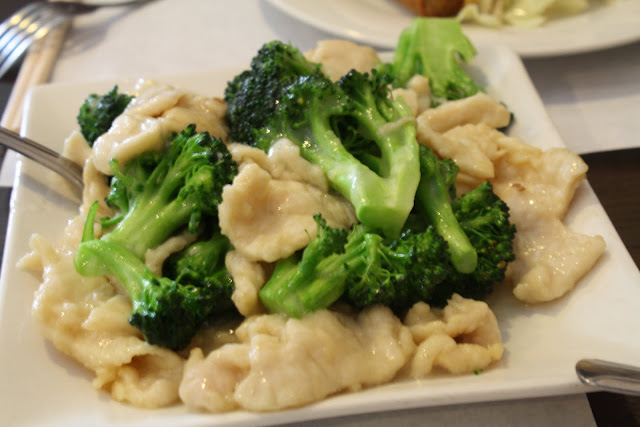 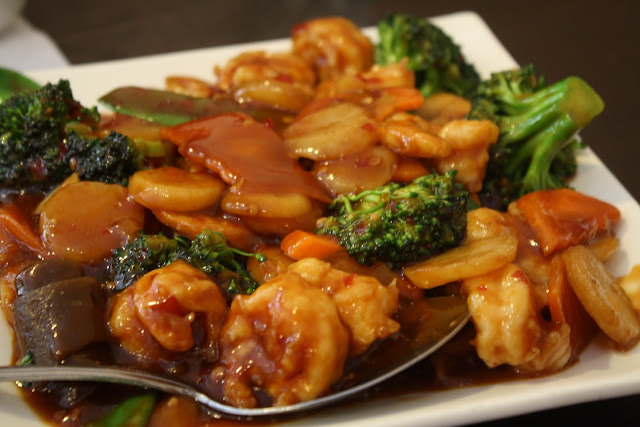 There had been some warm days during the weekend, but by the time Saturday morning hit, the temperature had dropped quite a bit and it was cool. I suggested that we go to Golden China for lunch - some soup and an egg roll sounded to to me, along with one of the lunch specials.

Elizabeth ordered the sliced chicken with broccoli, one of her favorites. And I ordered something I'd never tried before: shrimp with garlic sauce. I really liked it. The shrimp were plump and tender and the garlic sauce was a nice mix of spices. 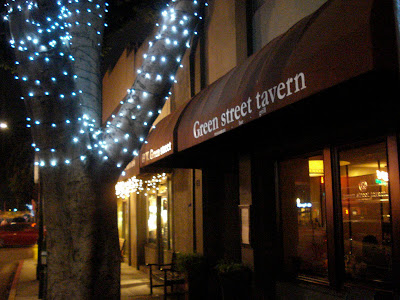 I didn't feel like lugging my camera to dinner with me so I just used a several years-old point-and-shoot. And it was dark inside and I didn't want to use the flash. So the pictures didn't turn out very well. But hopefully well enough to make the point. 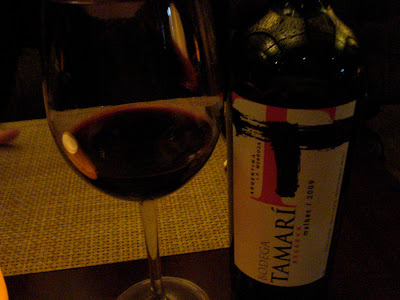 We started with a bottle of Tamari, an Argentinean malbec. It was very tasty, a slightly-floral, nutty red. 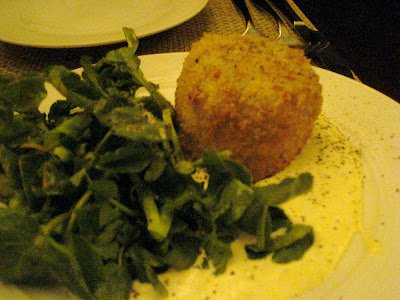 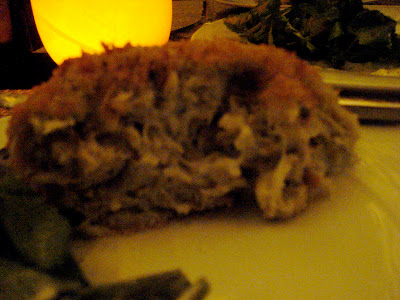 As an appetizer we split a "spicy crab cake." There was nothing spicy about it but we didn't care: it was great. The crab meat was fresh and plentiful and the tartar sauce and lemon vinaigrette were a nice combination. 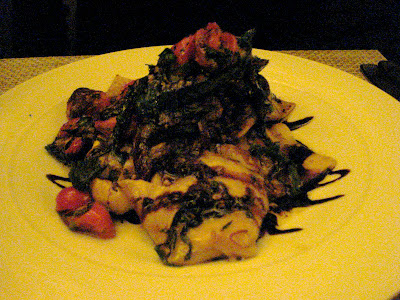 Elizabeth had the ravioli. She loved them and was nice enough to give me one. I loved it, too. The goat cheese interior was creamy and went well with the balsamic onions and vegetables. 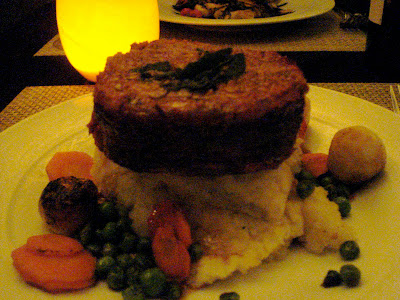 I have almost always ordered the filet mignon for dinner at Green Street Tavern. But Saturday I went with something different: the wild boar meatloaf. This was one of the best things I have eaten in weeks. The wild boar was slightly gamey and very tender. Wrapped in a salty bacon, I could have eaten at least two pounds of this. The garlic mashed potatoes were good, and under other circumstances I probably would have been raving about them. But all I was concentrating on was the porcine meatloaf.

It was a great dinner. 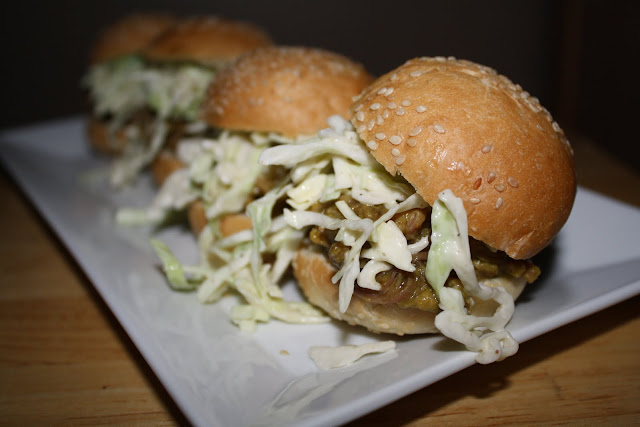 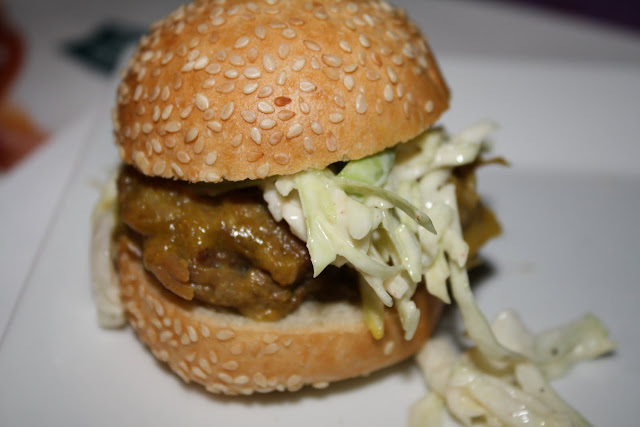 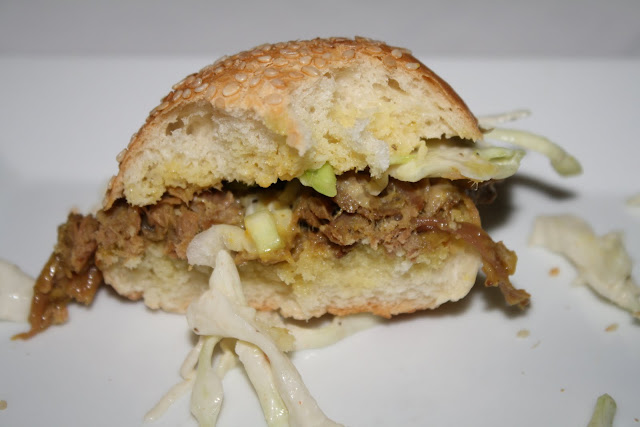 My friend Zach - one of my best friends from high school, who has featured on this blog many times over the years - was in town for his grandmother's 90th birthday. They were cooking several kalua pigs for a big party and he told me to stop by after the party for some leftovers. Never one to pass up free pork, I took him up on the offer.

So I stopped by in the afternoon and he fixed me a doggie bag full of pork. Sunday afternoon I made myself a sauce with Bone Suckin' Mustard, cider vinegar and cracked black pepper. I mixed it in with the pork, heated it in pan, and placed it on Trader Joe's mini buns, topping it all with a quickly-made cole slaw. 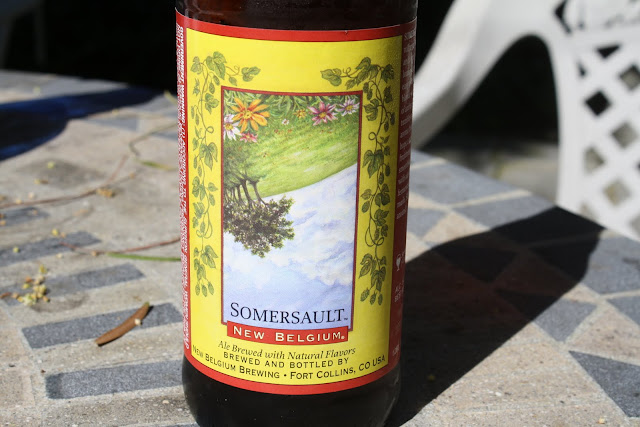 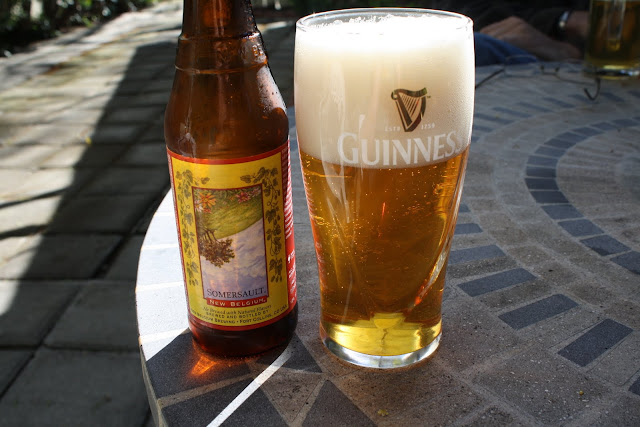 It turned into a beautiful Sunday afternoon, so Tim and Tracie came by for some beers. I drank New Belgium's new Somersault. Replacing the Skinny Dip summer ale of years past, Somersault is a fantastic blonde ale. New Belgium promises flavors of apricot (which I did not get) and ginger (which I got a lot of). Skinny Dip was great; Somersault is even better. 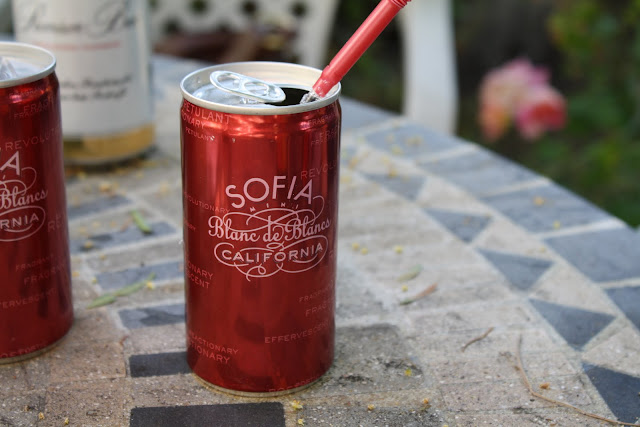 Tracie brought two cans of Coppola "Sofia Mini Blanc de Blancs." They looked kind of ridiculous - particularly with the plastic straw attached to the can - but she really enjoyed them. But not as much as she enjoyed the fact that she was carded when buying them at Whole Foods, despite the fact she is ❚❚ years old. 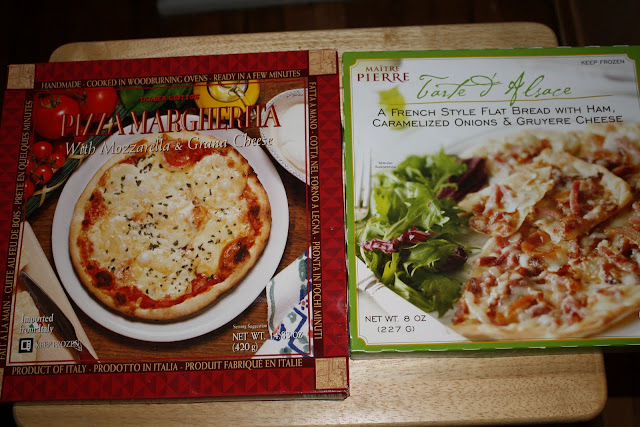 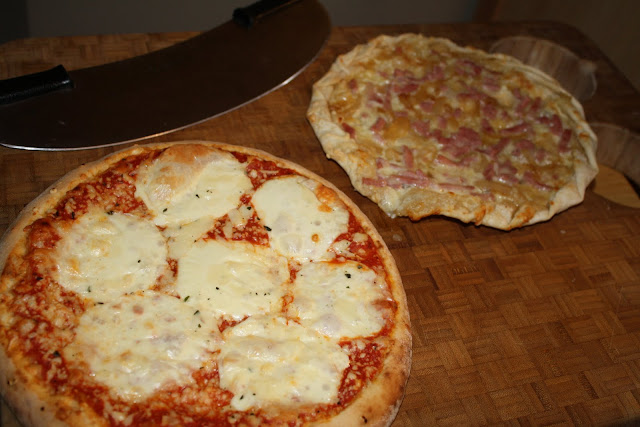 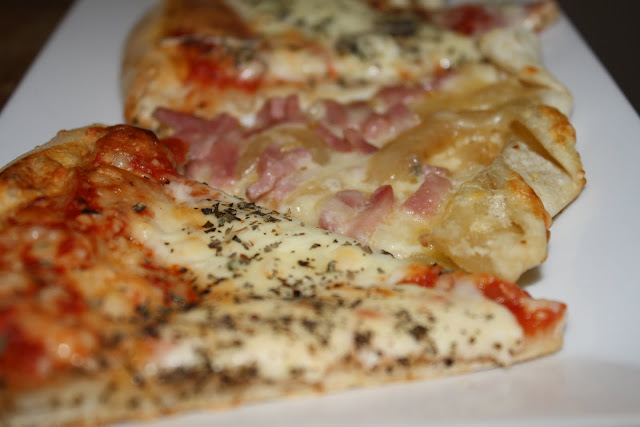 We did not feel like exerting much effort for dinner, so we just got two frozen pizzas from Trader Joe's: Margherita and Tarte D' Alsace. Both of them cooked in the oven in ten minutes and were very tasty... for frozen pizza. I know it would have been better if I'd just made a pizza with fresh dough, but hey, it was Sunday evening, I didn't want to.

The ravioli was amazing. I think there was a little citrus mixed in with the goat cheese which was a nice balance to the balsamic.

And that pork was pretty tasty too!

Bone Suckin mustard is absolutely the BEST! Love their BBQ sauce, too. And ps...I want to have a friend whose family roasts whole pigs!

Happy Birthday to Elizabeth! Your post is full of all things I love: Nachos, Lobster Mac, Crab Cakes, Mashed Potatoes, Beer.... Good weekend for you guys!