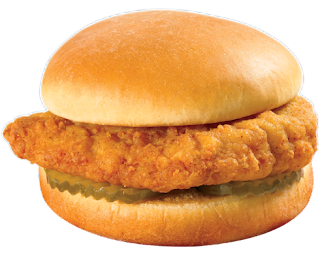 Months ago I was excited to learn that Church's was releasing a "Southern Style Chicken Sandwich." It was prominently displayed on their website, with splashy graphics and sound. The next day I went to Church's and inquired about it. I was met with a blank stare that I have seen many times over the years in such places: the employee had no idea what I was talking about.

So the following weekend I went to another Church's. And then another. In total I think I visited at least five Church's that weekend. (I never claimed to be cool.) Nobody had it; only one person had even heard of it.

So I returned to the McDonald's sandwich of a similar name, wrote about it, and put the Church's version out of my mind.

Then yesterday I read that the Church's sandwich was finally going to be released nationally. I was inspired again to seek it out. I ventured to the Church's closest to me. There was a sign for the sandwich in the window and a decal on the door reading "southern style chicken sandwich has landed." See: 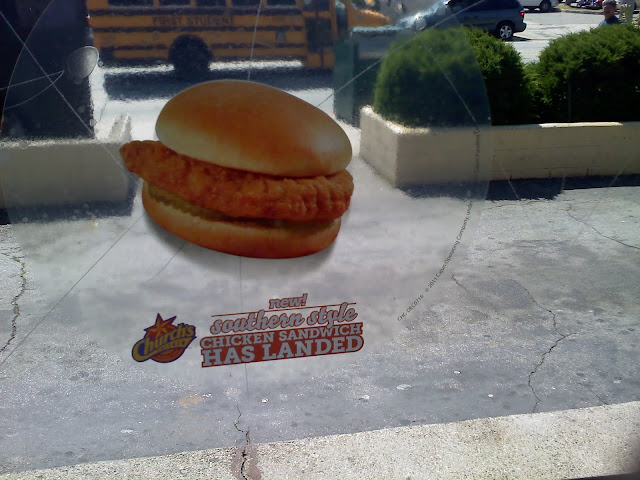 The guy behind the counter told me I would have to wait five minutes; I said "No problem." (Like I wrote about Popeyes yesterday, Church's has lots of fried chicken pieces just sitting out under heat lamps. If waiting five minutes assured me a fresh chicken breast, I had no problem with that. Plus, you know, I'd waited more than four months for this sandwich, another five minutes wasn't going to kill me.) They even offered me a free small soda while I waited.

(He also asked me if I am Jeff Jarrett. I said no. Because I'm not. But I had no idea who that is; I had to look it up when I got home. He is a professional wrestler. He's 11 years older and 35 pounds heavier than I, but we're both roughly the same height, we both have blonde hair, and we've both wrestled Hacksaw Jim Duggan.) 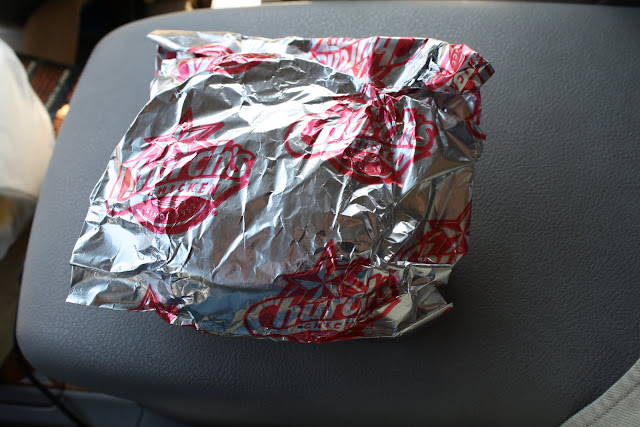 I took the sandwich to my car to eat it, since there was an Angels game on the radio and a crazed woman in the restaurant repeatedly asking me for money. I immediately noticed the size of the sandwich: it felt hefty in my hand. 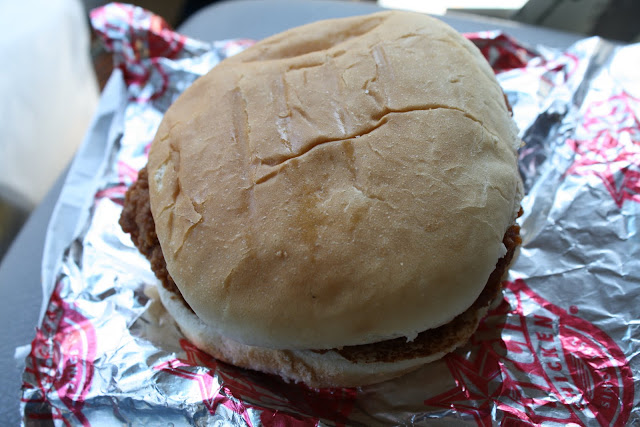 It was nice-looking when I unwrapped it. The bun was soft and large, though the chicken still poked out from underneath. And the smell was fantastic, that unmistakable scent of freshly fried chicken. 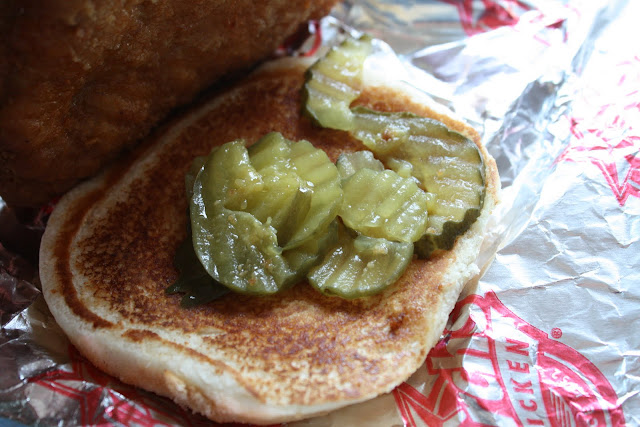 Unlike McDonald's sandwich and the two slices of pathetically thin pickles, there were three crinkle cut pickles on this sandwich. They weren't attractive - they looked like they had been diced up - but they tasted much better. 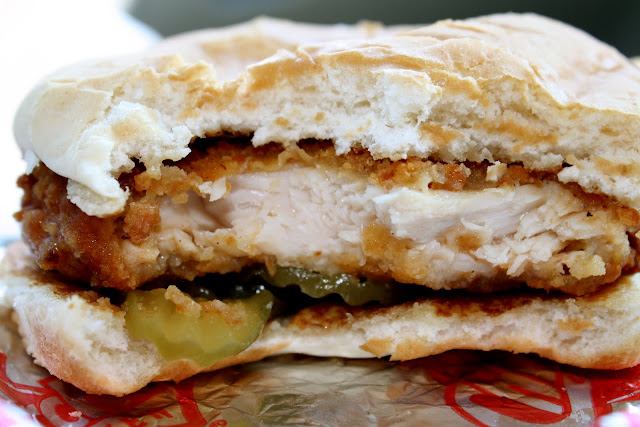 And the chicken was just awesome. A thick, juicy patty of white meat, it was very hot, medium-spicy, and full of flavor. I have had many fried chicken sandwiches in my life. A few from Chick-fil-a, some from barbecue joints, one from a famous restaurant in New York City... and none were better than this sandwich. At $1.99, it is a phenomenal deal. 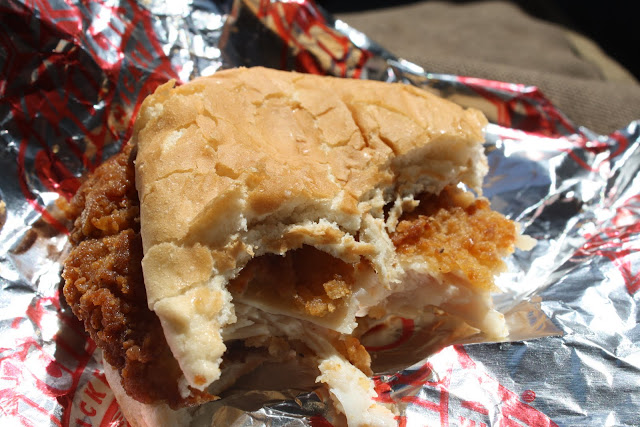 My original plan had been to only eat half the sandwich then take it home and put the leftovers in the fridge. (I'd had Japanese food for lunch and wasn't particularly hungry.) When I saw how big it was, I thought I might only eat a couple of bites. But it was so damn good I just kept eating and eating... and eventually finished the thing. And I have no regrets. This was a delicious sandwich. I cannot wait to try it with Church's creamy jalapeno sauce.

That really does look fantastic! And, hello...creamy jalapeño sauce only ever adds to deliciousness. Damn...now I gotta find me a Church's!

Church’s always smells delicious when I ride by. I forget about its existence (OrangeGrove/FairOaks) until I’m like hey it smells like fried chicken I’m starving oh its Church’s again haha. Glad it was worth the wait.

I feel like Church's definitely flies under the radar and people don't think about it, which is too bad because it is MUCH better than KFC, and a lot of the time it's better than Popeyes.

I only went to Church's once in the first 28 years of my life, and that was to buy someone else food. So I'm guilty of forgetting about it, too.

The Pasadena location ALWAYS has a cast of characters inside or in the parking lot, though. Most of the time it's comical, but sometimes it gets uncomfortable.

That's hilarious. You need to start your third blog--Fries and the Figure Four Leg Lock.

20+ years ago I used to do that to my friends sometimes. They didn't think I could actually do it - it's pretty simple - and once I got it on they would howl out in pain. I haven't tried it in more than two decades but I bet I could still do it.

The jalapeno sauce might be my fav fast food sauce.

Ever since my dad and I would sneak off to Church's (in Dallas and on weekends), I've had a soft spot for that place. That's my joint! Well, when I'm craving fried chicken and find myself near one.

Thanks for the write up. I stopped by yesterday (my FIRST visit to Church's) and bought the sandwich. The chicken was excellent and I liked the sauce. The bun was sad and it needed more pickles.

The people working there were very nice but I have never been in a fast food place with bars before...

No problem, Sue. I loved the bun both times I've had this; sorry yours was sad. But I agree, it needs more pickles. The Church's in Monrovia is bigger and cleaner - and doesn't get nearly as hot - but Pasadena is certainly much closer to me.