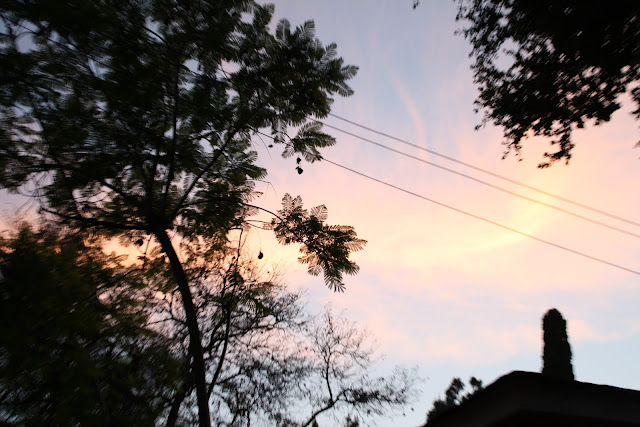 I could think of no better way to celebrate the longest day of the year than having some friends over and cooking pizza on the grill. 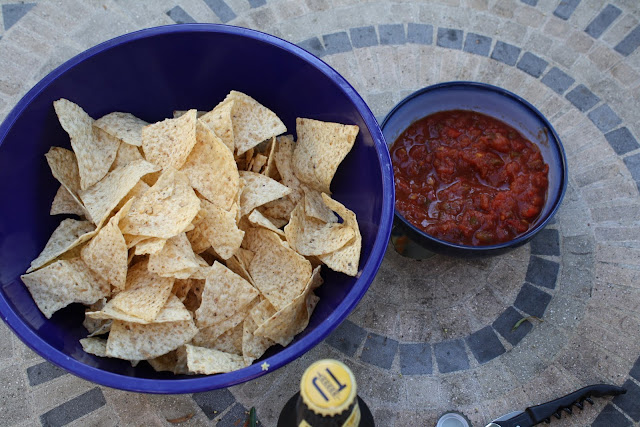 You can never go wrong with chips and salsa. 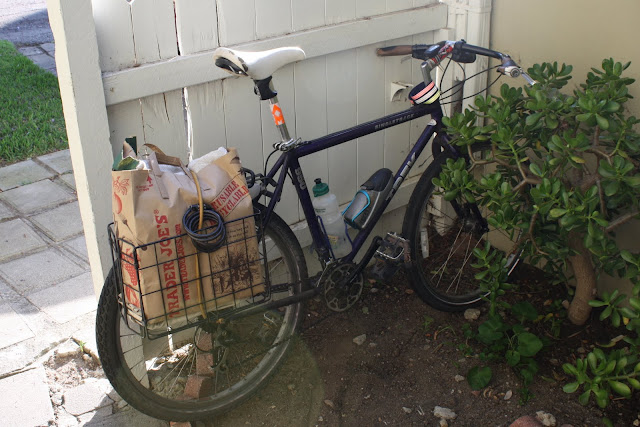 Mindful Mule was there, with a basket full of beer. 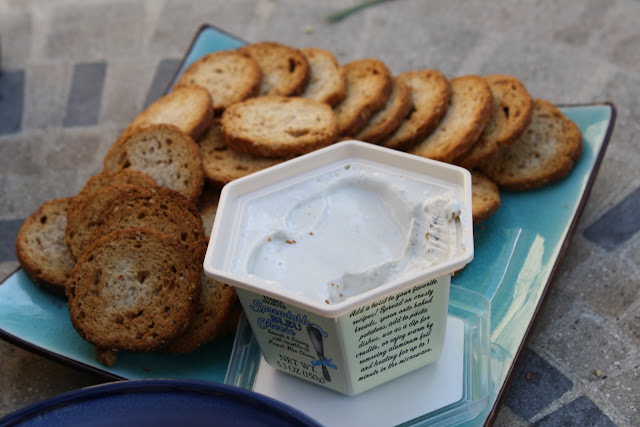 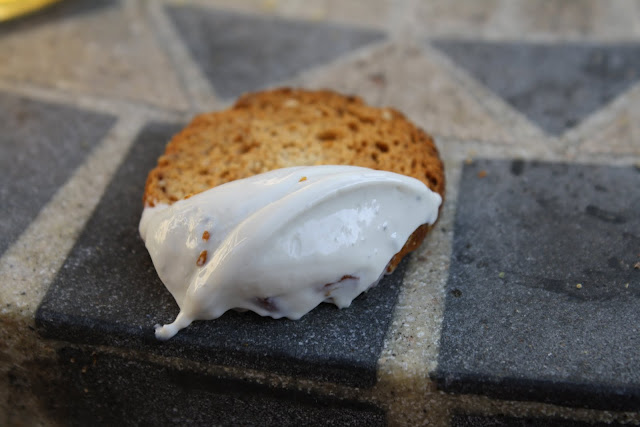 Rob brought a Trader Joe's spreadable blue cheese: something I'd never had before but was delicious. 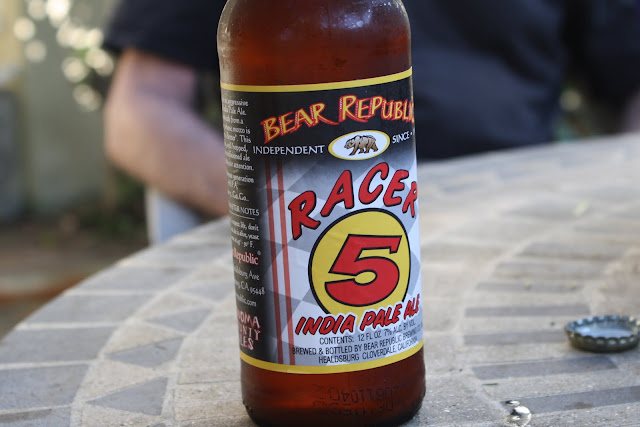 There is probably no IPA in America that I like more than Racer 5. 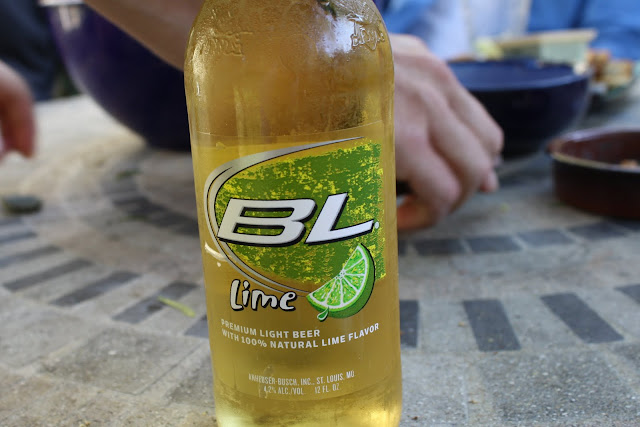 Hillary loves Bud Lite Lime. It's not for me, though. 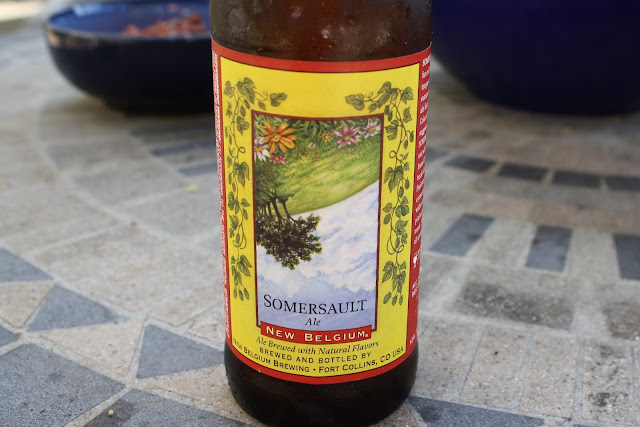 Somersault, on the other hand, definitely is. 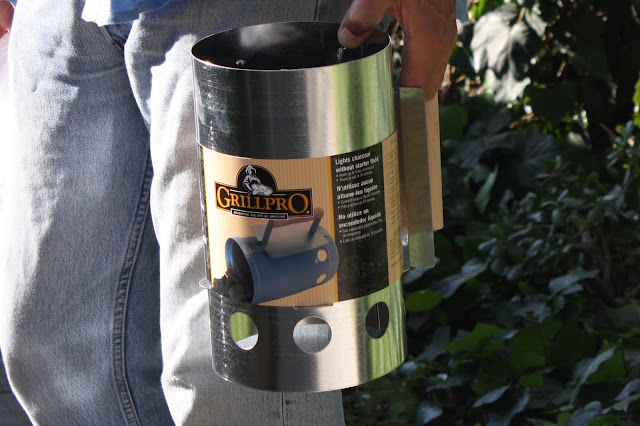 I asked Tim if I could use his chimney starter. He brought one for me, saying he was planning to give me one for my birthday, which isn't for a few more weeks, but he gave me an early present. I'll take it. 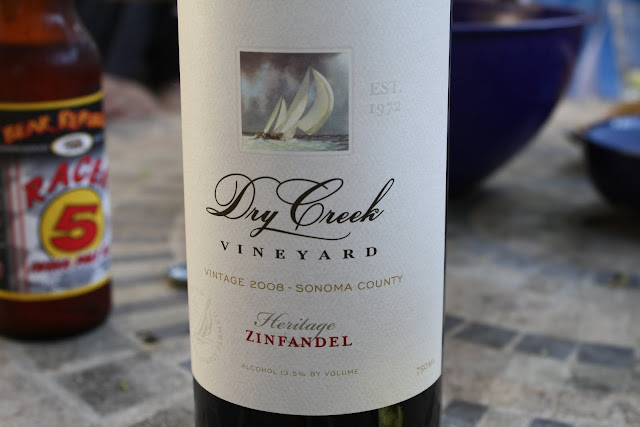 And he brought some Sonoma zinfandel. 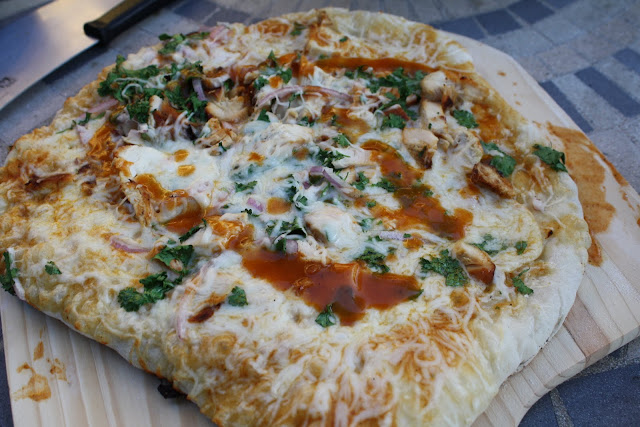 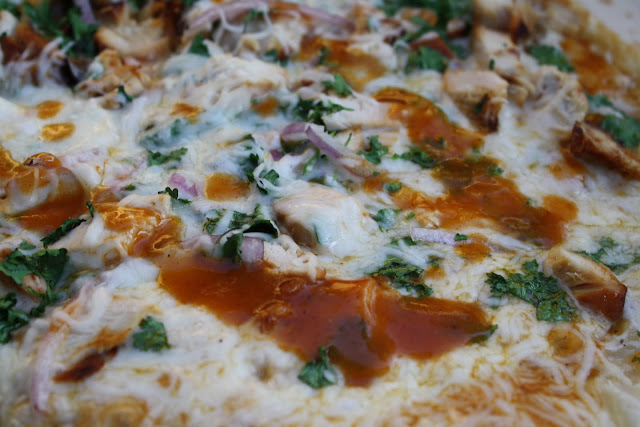 The first pizza I made was BBQ chicken: barbecue sauce, chicken breast, red onion, cilantro, and mozzarella. I used Memphis Championship Barbecue's bottled sauce, which I felt was a mistake: it's too thin. I prefer a thin sauce when I'm eating barbecue, but for a pizza, I should have used a thicker one. But nobody else seemed to mind. 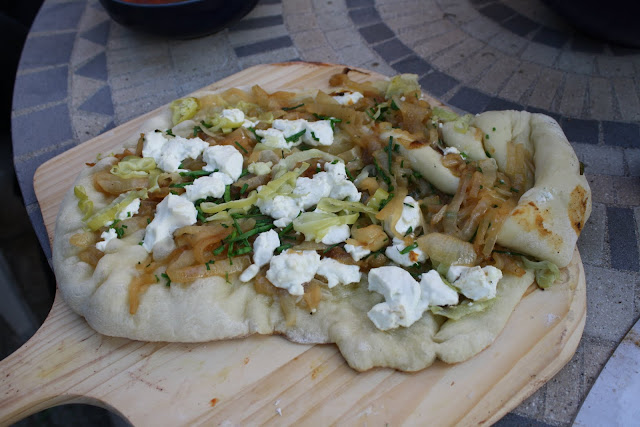 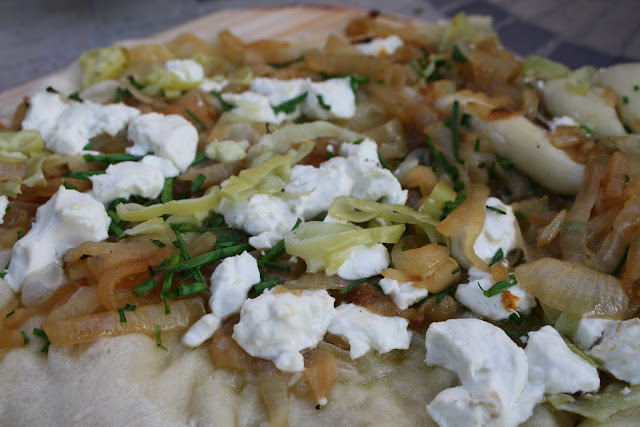 A few months ago, Tim's daughter, Dana, was telling me that she loves pizza but she isn't crazy about pizza sauce. I told her I would make her this pizza, which has appeared many times before on the blog: goat cheese, caramelized onion, chive, olive oil, and spicy peppers. This pizza disappeared quickly.

(This pie did not slide off the peel very well when I put it on the pizza stone, which is why it looks messed up. I saved it as best I could, but it still was deformed. Oh well: "It's rustic," I told people.) 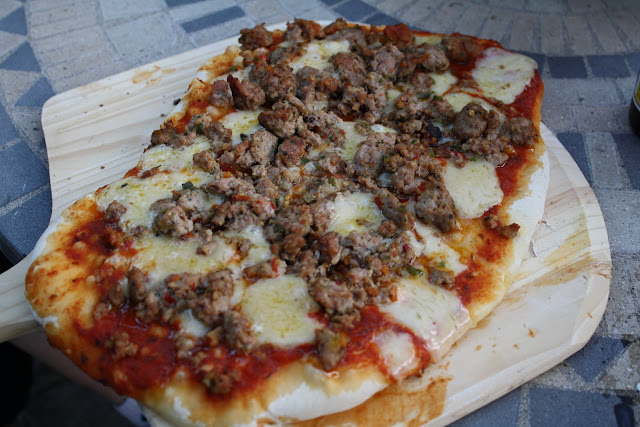 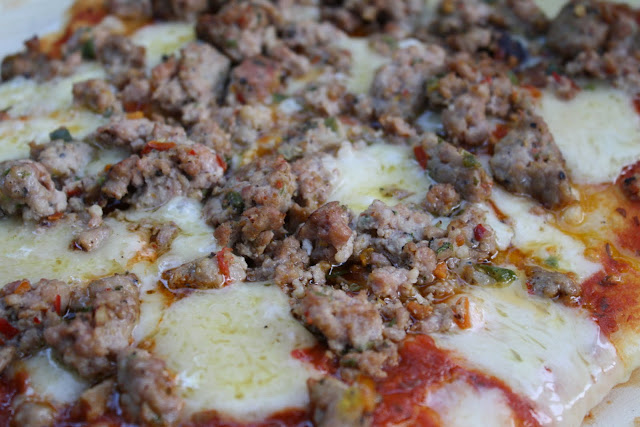 The third pizza of the evening was a spicy sausage pie. I took the sausage out of the casing, cooked it in a wok and drained the fat. I wanted a sweet cheese to offset the spicy pepper in the sausage, so I went to Fresh & Easy and got a package of English cheddar with onion marmalade.

This seemed to be the most popular pizza of the evening, and it was certainly my favorite. "Unbelievable," Murph exclaimed - the same adjective he has been using about my cooking for years, but one that nonetheless never fails to make me pleased. Next time I think I might add some mini sweet peppers to this pizza, but if I have to make it again just like this, I won't complain. 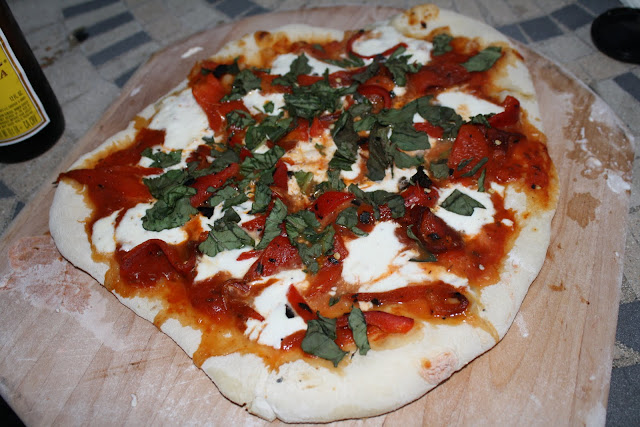 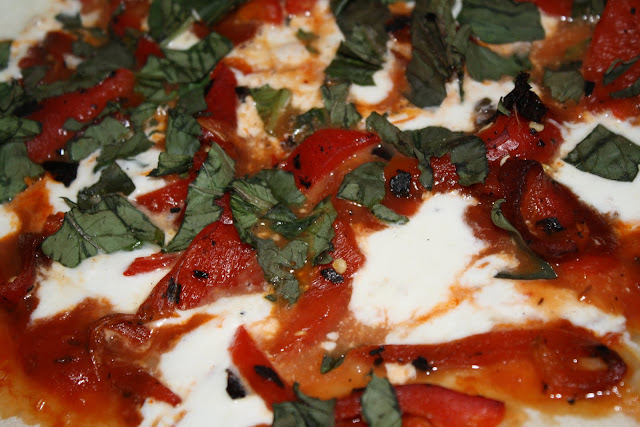 The final pizza of the evening contained burrata, roasted red peppers, and basil. This was very good, too. Two people claimed they weren't hungry any more when I placed this on the table... but they both ended up giving it a try because it was just so pretty. Rob, a vegetarian, gladly helped me finish this pizza. 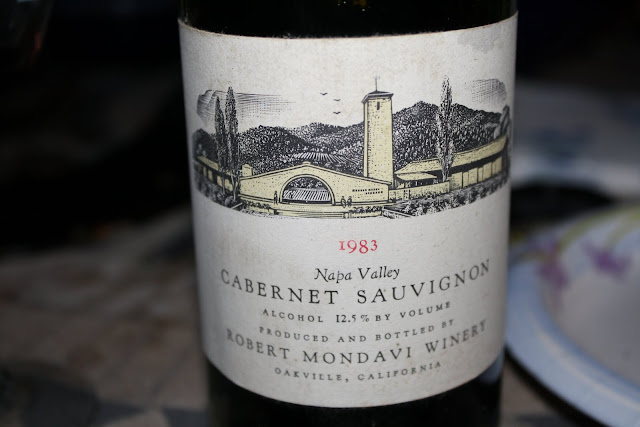 Finally, around 9:15, it was completely dark. Tim brought out a bottle of '83 Mondavi cab. I'd had several beers at this point - I just don't do well mixing beer and wine anymore - so I only took a little sip. It was beautifully smooth. 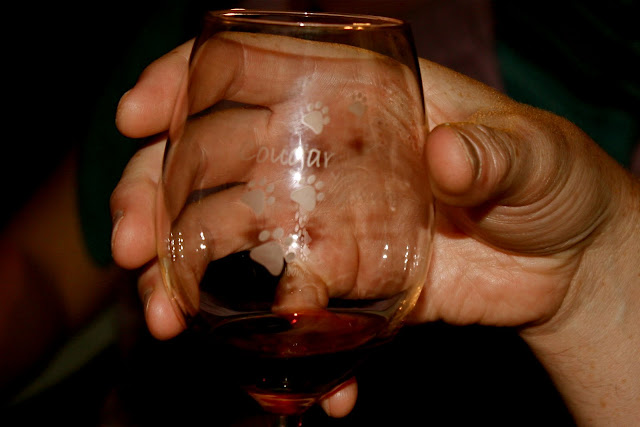 I had been so busy cooking pizza for everyone that I neglected what I consider my main duty: making sure Tracie gets the Cougar glass. Somehow Dave ended up with it. I promise this will never happen again.

Overall, as you can probably guess, it was a great time.
Posted by JustinM at 2:55 PM

Looks so great. I love how much you use your grill. So many people have them just sitting at their house and NEVER use them.

All of the pizzas were terrific; the crusts perfectly cooked. Slightly crunchy outside but chewy (but not raw) middle.
Credit for the Dry Creek Zinfandel goes to Rob, and it was mighty tasty too!

I apologize, Rob! I did not know the Mule carries beer and wine. Thank you all for providing beverages.

Michelle: The funny thing is, it's actually Tracie's grill - she's just never used it. I bought it for her 4 years ago at Target because it was on sale for a great price and I wanted her to have it... but then she moved to a place where she didn't have room for a grill, so it sat in the box for almost a year. Then Elizabeth and I needed a grill, we took Tracie's "gift" and never looked back. But at least I cook for her on "her" grill, so it's all good.

Fritos: I can't believe, as much as I stalk the aisles at TJ's, that I'd never seen this before. Any ideas what I should do with some? Spread on a burger? Steak sandwich?

A sensuous evening!
I wish it could be Summer Solstice every night…
And to hint away my love for musical theatre: “wine and beer!”
Sorry I missed the Cab!

There will be other Mondavis, of that you can be sure. And perhaps we will pour oh pour the pirate sherry next time.

Spread on a burger for sure!