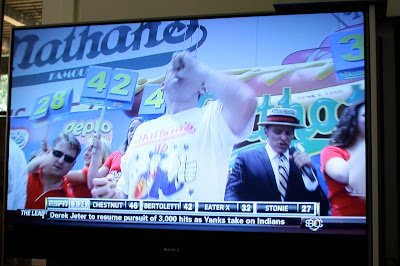 No collection of 4th of July weekend eats would be complete without brief mention of my annual tradition of watching the Nathan's Famous International Hot Dog Eating Contest. This year the telecast on ESPN was a beauty, full of gems like "Competitive eating is the fastest-growing sport in America." And when Joey Chestnut was "only" able to eat 62 hot dogs - 6 short of the record he set in 2009 - there was a serious discussion of how this year's heat may have been a factor in his performance. 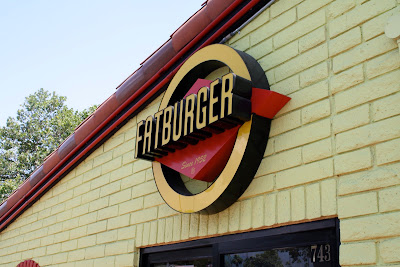 Lunch on the 4th was a bit of a struggle. We went for a drive with no particular destination in mind. I asked Elizabeth - who has recently decided she really likes the McDonald's Southern Style Chicken Sandwich - if she would like to try the Church's version, which I think is vastly superior. She said sure. So we went to Church's. Only Church's Chicken was out of chicken. Go figure.

So I thought Chinese food sounded good and we headed over to China Express to see if they were open. The lights were on - including the neon sign reading "Open" -  and the door was wide open, so we parked and started to walk inside. There was a small hand-written sign on the door reading "We will be closed on the 4th of July." No one was inside. Oh. 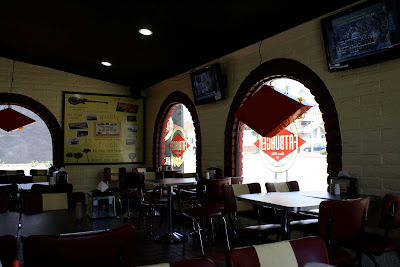 So we went to Fatburger. They were open but it was surprisingly empty. (Although there seemed to be a fair amount of traffic going through the drive-through.) There were two sporting events on the TVs, both of zero appeal to me: the 1986 Slam Dunk Contest and professional bowling. 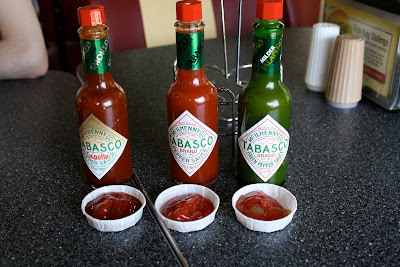 Last time I mixed myself Chipotle Tabasco and ketchup; this time I used all three varieties of Tabasco to make flavored ketchups. It turns out the chipotle version is the best. 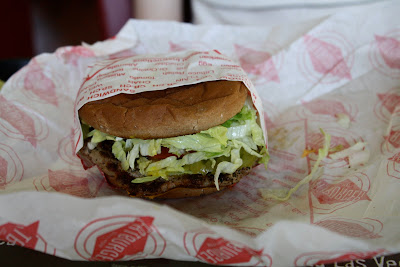 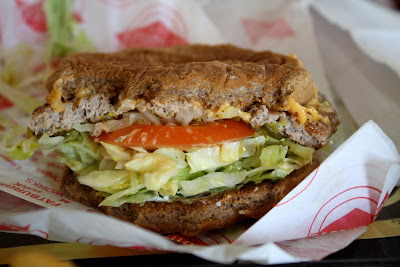 Elizabeth got the turkey burger. I believe I have made a convert out of her. She ate the entire thing and loved it. 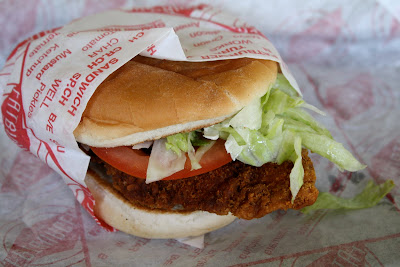 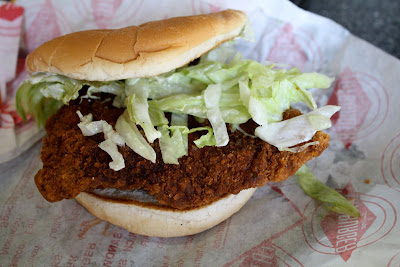 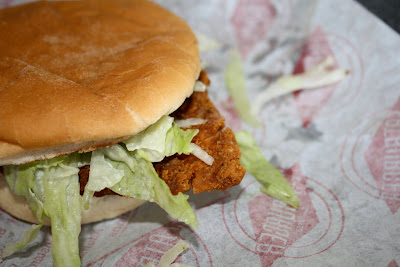 I wasn't in a burger mood. You may find it silly for me to go to Fatburger when I'm not in a burger mood, but remember, this was the third place we stopped. I was hungry. At this point I would have eaten at the KFC across the street. (Not really.) I ordered the spicy chicken sandwich. I wrote about this sandwich once a couple of years ago, when Elizabeth and I stopped by the Fatburger on Vermont before seeing Regina Spektor at the Greek. It was really good, a juicy, fried chicken patty drenched in hot sauce.

So I was expecting that again yesterday and was surprised when I was presented with a sandwich devoid of sauce. But not really disappointed: both Wendy's and Jack in the Box have spicy chicken sandwiches without sauce, and I like both of them.

While discarding the tomato I noticed something: this chicken was as hard as a rock. I still took a bite. I have never, I think, had something as over-fried as this. I honestly was worried it might crack a tooth. It was still tasty - although there was no spice to it and I had to add a few shakes of Tabasco to liven it up - but man was it crispy.

I think my two experiences with chicken sandwiches at Fatburger are enough. I'm sticking with burgers from now on.
Posted by JustinM at 9:24 AM