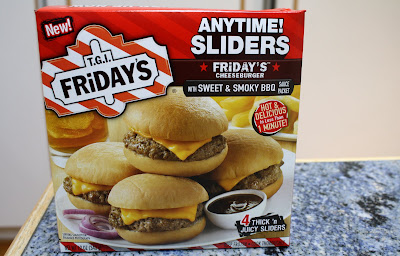 A funny thing happened this morning. On Monday and Tuesday I wrote about food I ate over the weekend. When I started thinking what to write about today, I realized: almost all of my food pictures - over 20,000 - are on the MacBook... which just happens to be in New York at the moment.

So I had a couple of options. I could get photos off of my external hard drive and use those. But those photos are at least a couple of years old - in some cases more than six years old - and they were taken with cameras I used to use, including my first digital camera, a boxy Canon Powershot that took lousy close-ups (and yet somehow cost almost as much as my current Canon DSLR).

Or I could just write about the things I've eaten this week. That's what I decided to do today. Back in the 2008, when the blog was in its infancy, I wrote about trying several TGIFriday's snacks because they had all been half-price at Ralph's. Some of them were decent, but none were anything special, as evidenced by the fact that I have never tried them again. (The exception being the fried cheese, which is done because Elizabeth loves fried cheese, not because I think it's particularly good.)

TGIFriday's has some newer frozen offerings out now, and when I was at the store two days ago I noticed that they were all marked down quite a bit. And I was really hungry and wanted something I could cook immediately. (I was actually hoping for another of those roast beef and havarti sandwiches that I had two weeks ago, but they were all out.) When I saw they had "Anytime!" cheeseburger sliders, I decided to give them a try. Normally I would be concerned that I was not eating them at the proper time, but thanks to the company's permissive "Anytime!" labeling, my worries abated. 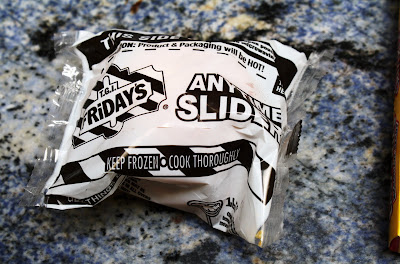 Unlike White Castle sliders, these are packaged one to a wrapper. You put the whole thing in the microwave and nuke it for about one minute. 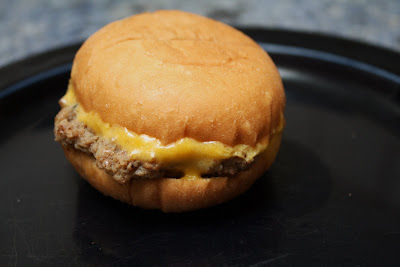 The first thing I noticed was that the bun looked and felt surprisingly good for something that had been frozen and microwaved. Normally all bread takes on a spongy feel and is difficult to tear, even with your teeth. This was soft. 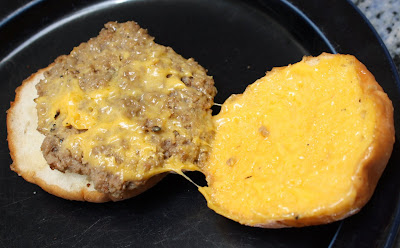 The meat and cheese looked, well, exactly like you'd expect: dull grey and fluorescent orange, I really didn't think it was going to taste very good. 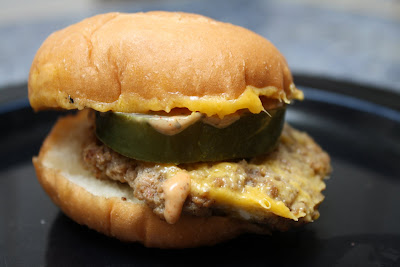 So I added a thick slice of a deli pickle and some remoulade. I'm not entirely sure why that's the combination I chose. It just is. (I wasn't going to open the "sweet & smoky" barbecue sauce packet included in the box, because that did not sound good to me.) And you know what? It wasn't bad. It wasn't anything great and I'm not going to make it a habit of keeping these sliders in my freezer, but it was a good snack. One slider is a pretty good size, and it is much tastier than White Castle's frozen sliders. I still have three of these guys left, so I will think of a way to add condiments to them as well.

I'm going out to lunch with my brother today, so I will write about that tomorrow, and I am planning something for Friday that was requested by several readers. So this was it for the frozen food adventures this week.
Posted by JustinM at 1:02 PM