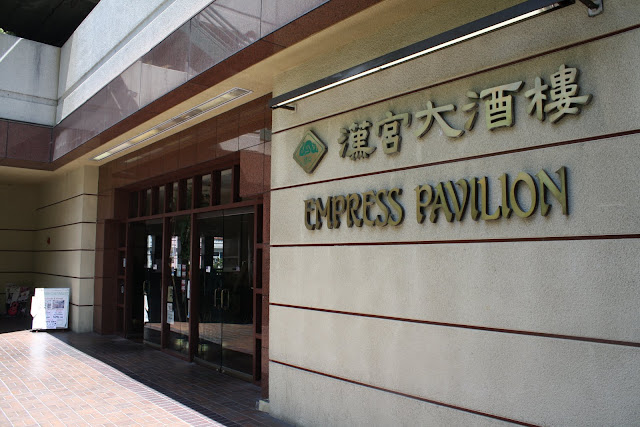 Last summer I told the tale of my friend Sylvia visiting from England and her desire to have dim sum for the first time in her life. Her husband and I headed down to Empress Pavilion and had a magnificent time, Sylvia proclaiming: "This was fantastic; I have never seen anything like this before."

She is back in town again and wanted to make a return trip. How could I say no? Last week the three of us were joined by our friends Les and Carla; we all met up at Empress at noon. 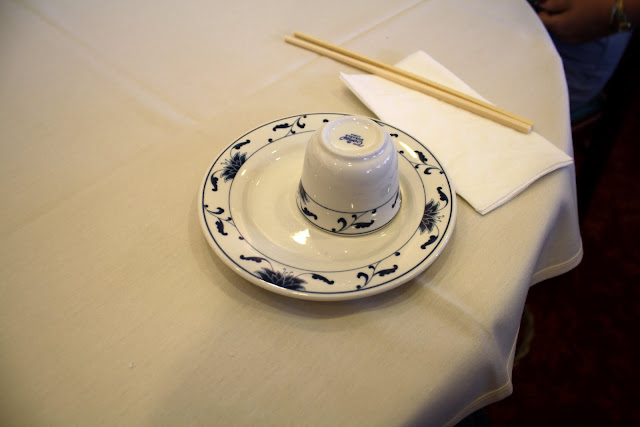 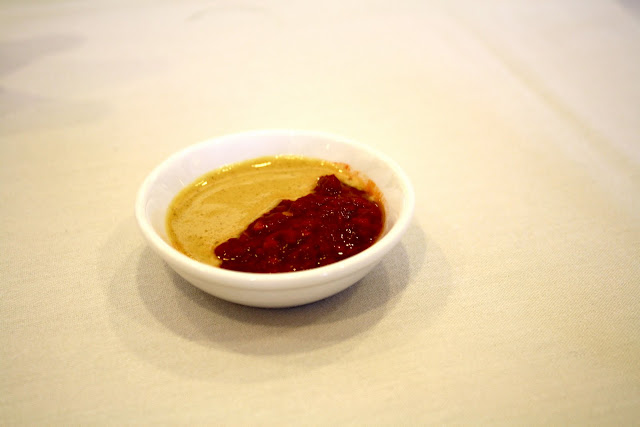 The tea cups are already on the table and the chili sauce and hot mustard is placed down within seconds of you arriving, literally before you even sit down. 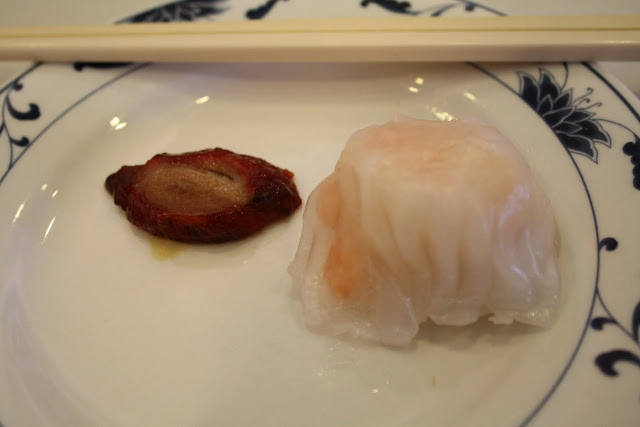 Also within seconds, the first cart appears. Usually there is a cart at your table before the last member of your party has even taken a seat. This occasion was no different, as both barbecue pork and shrimp har gow arrived. I've never been a huge fan of the former but I know my friends are, so we got a plate and I only took one piece. The latter has always been good, though: the shrimp hot and juicy inside. I believe I ate two of these. 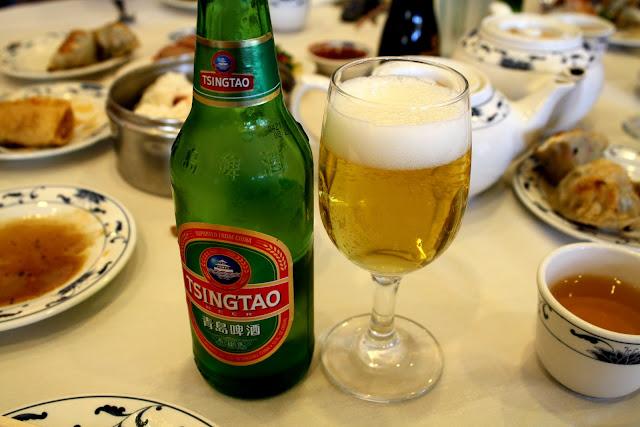 Sometimes I only drink tea with dim sum, but this was a very hot day and a cold Tsingtao hit the spot beautifully. 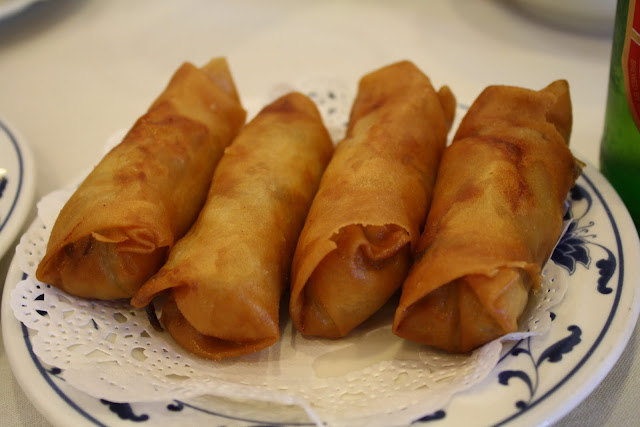 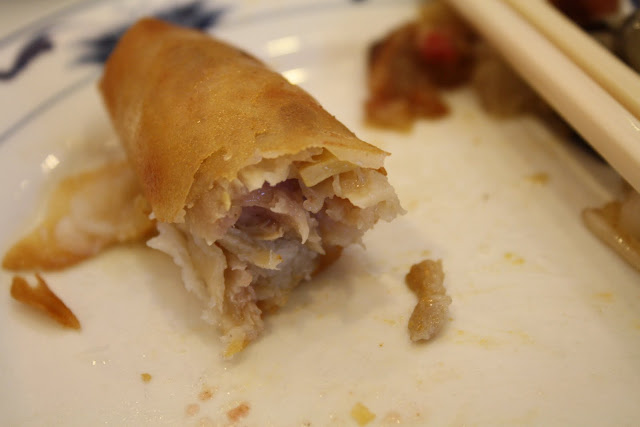 Every once in a while they will have spring rolls on one of the carts, but most of the time they do not. No problem, you can just order them off the regular Empress menu. It's actually better this way, as you get spring rolls that are just out of the fryer and very hot. They are some of the best spring rolls around. 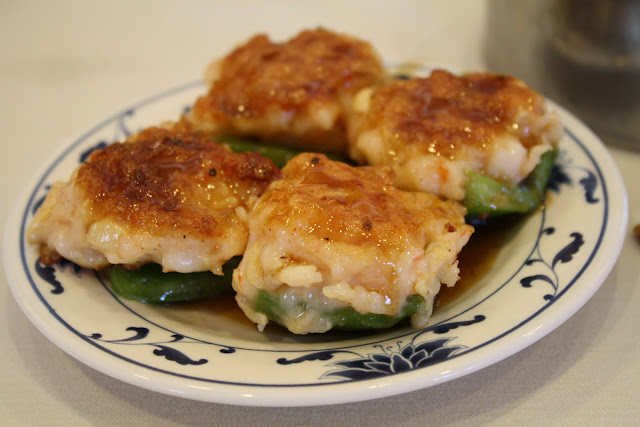 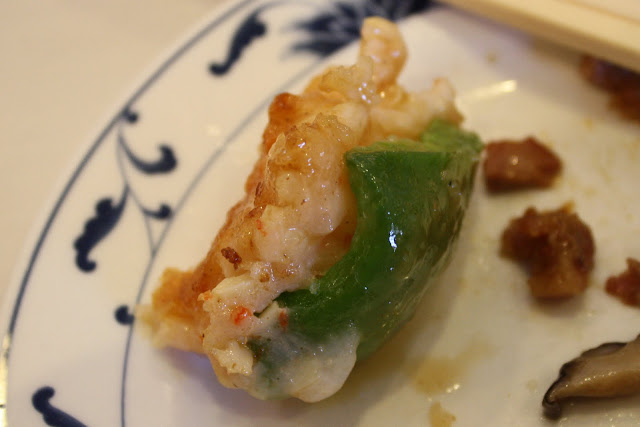 A dim sum item I've discovered relatively recently is stuffed bell peppers with shrimp. I love these; the juicy shrimp is complemented nicely by the crisp pepper and the semi-sweet sauce. I usually add a dollop of hot mustard to each bite. 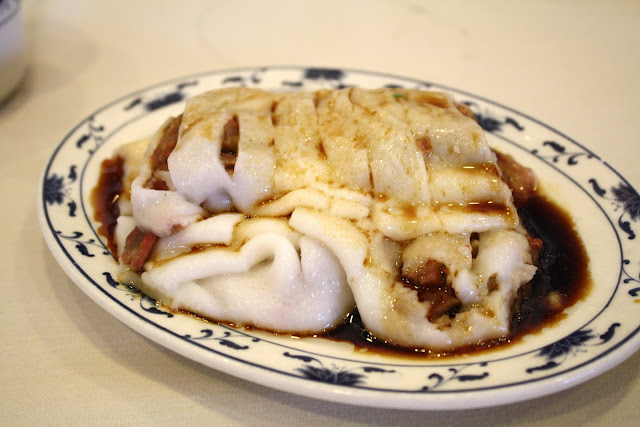 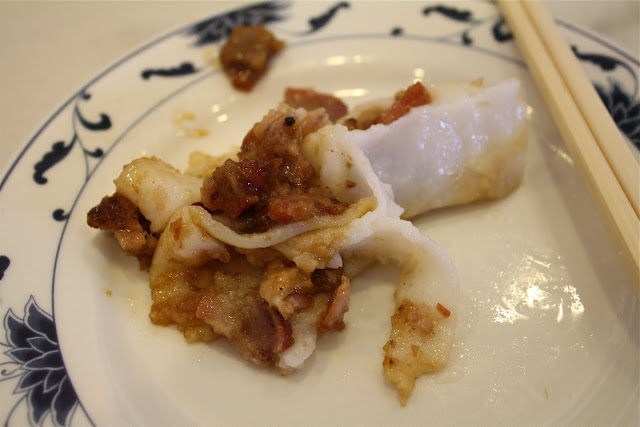 Carla asked for a rolled rice paper and pork dish that I'd never tried before, but it ended up being delicious. When I saw the cart go by, I was sure the rice paper would be too gummy. But I was wrong - it was tender and didn't fall apart quite as much as I expected it to, though it certainly proved tricky to share amongst five people. 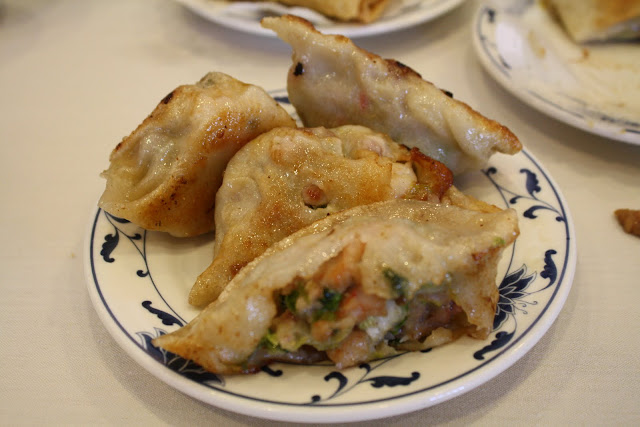 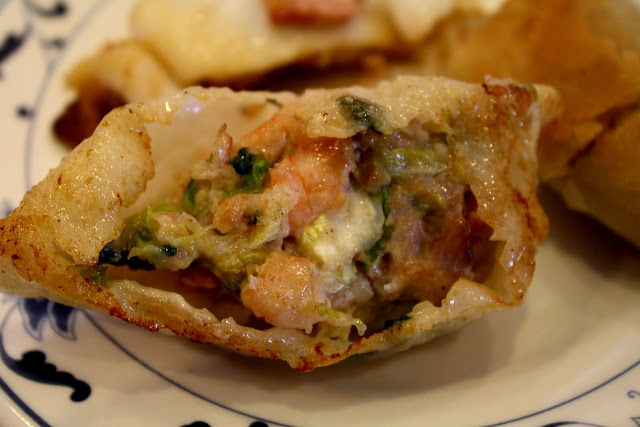 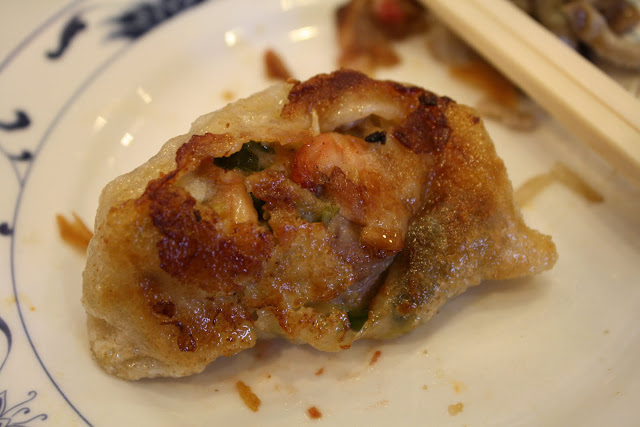 The potstickers are always good and always a popular choice. We got two orders and I ate two, perhaps three dumplings by myself. Full of shrimp and pork, these are in the top three of any potstickers I have ever had. 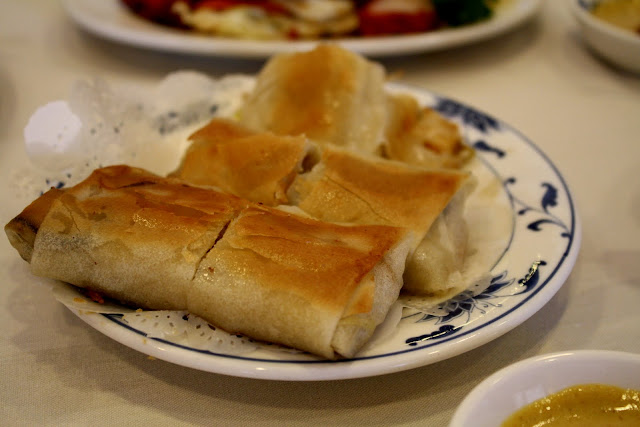 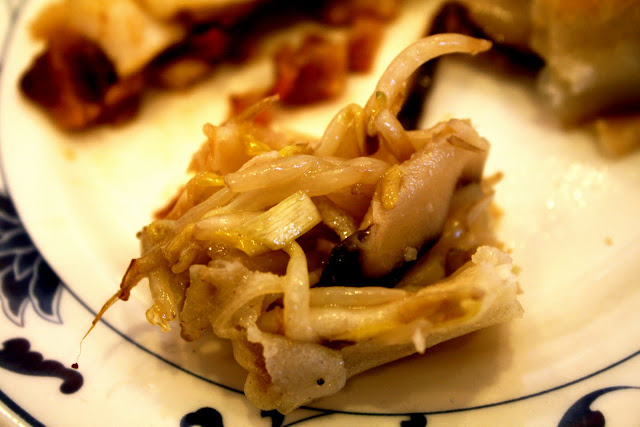 The vegetable spring rolls, with mushrooms and leeks. I'm not going to lie: I only took one little piece and was not a huge fan, as those are two of my least favorite things to eat. 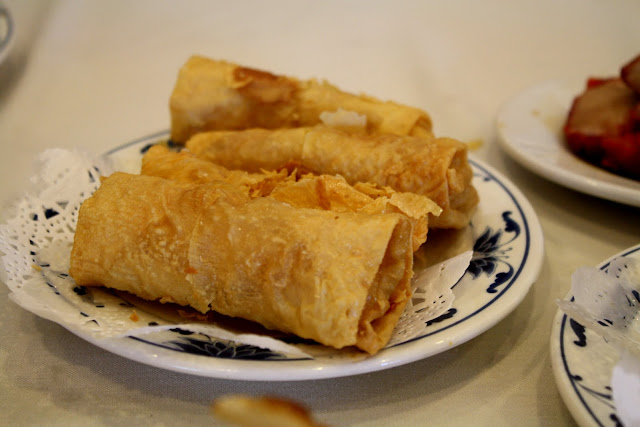 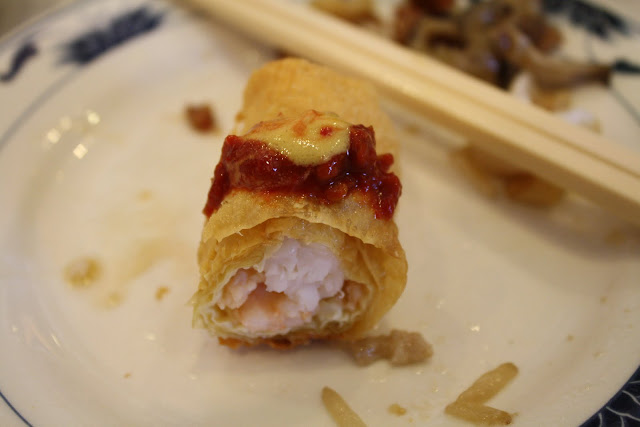 And here we've come to the only thing I've ever eaten at Empress Pavilion that I truly hated: a fried roll containing the toughest, most over-cooked shrimp I have ever put in my mouth. The first bite I spit into my napkin. It was like chewing a rubber ball. I drenched the remainder of the roll in chili sauce and tried another bite. No luck. 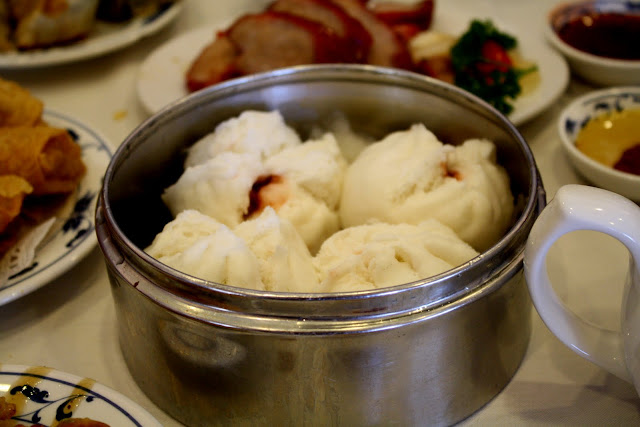 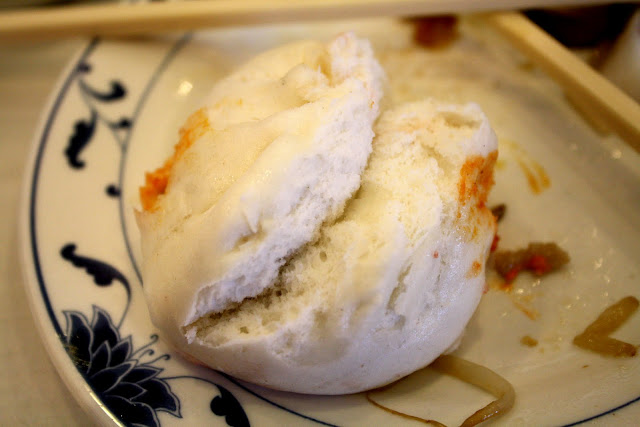 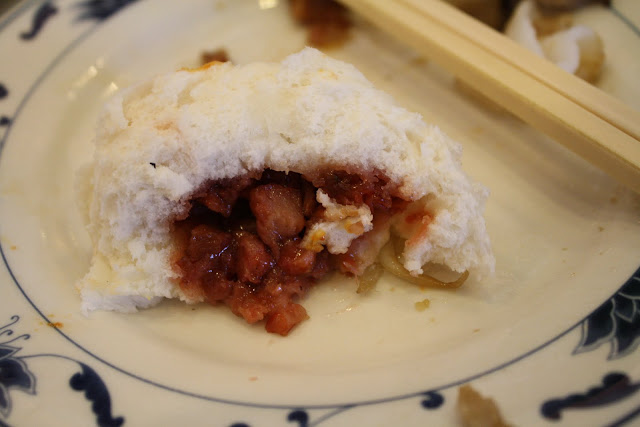 The steamed BBQ pork buns are delicious, soft as a feather, full of juicy pork. They are difficult to pull out of the steamer without falling apart - and even more difficult to cut in half equally, as I am doing here to share with Carla - but well worth the effort. 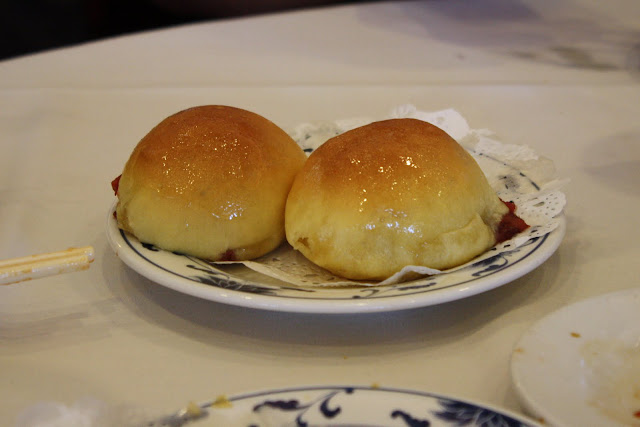 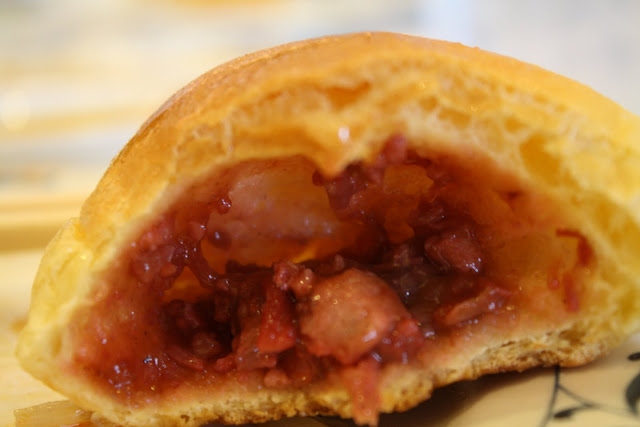 If you enjoy sweet flavors, you will love the baked BBQ pork buns. The dough is already sweet, and then then whole thing is glazed with syrup. Personally, I much prefer the previous steamed buns, but I can usually eat at least one of these. 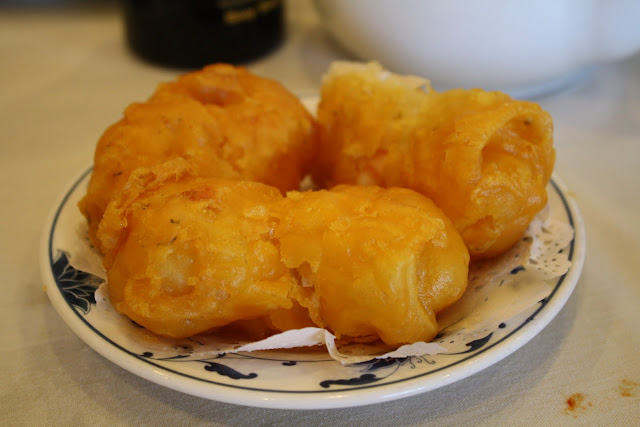 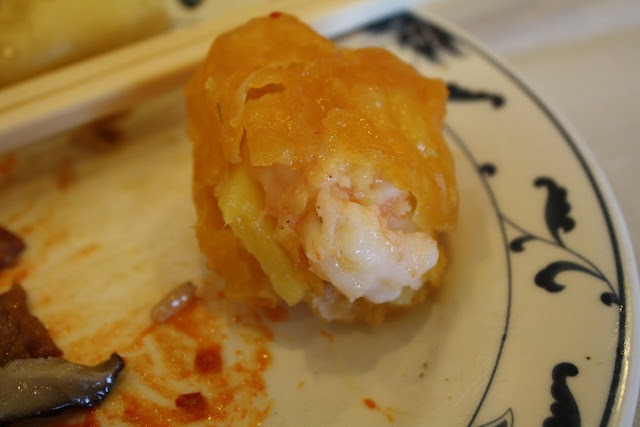 A woman was pushing a cart around with the above item, a golden-brown fried ball. I had no idea what it was. "It looks like English fish and chips," I said to my dining companions, three of whom were English. When the woman pushed the cart by me I said "Excuse me," intending to ask what they are... she looked right at me and walked by. Dim sum can be brutal sometimes.

Eventually she came back around and we were able to learn that they are shrimp dumplings with mango. I'd never tried that before so we got a plate. I wasn't a big fan of the mango but the batter was so crisp and the shrimp so good that I would gladly eat these again. 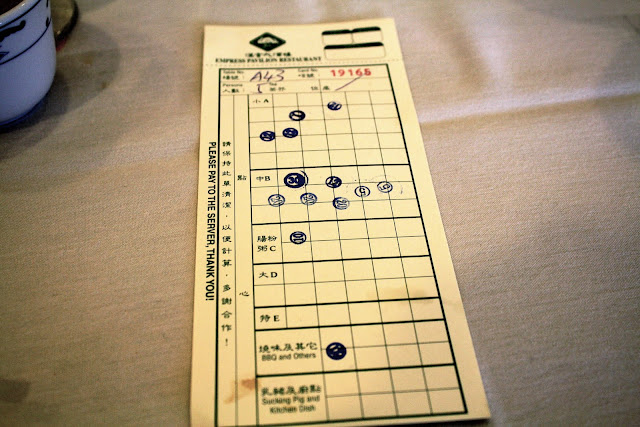 The only thing I wanted but was not able to get were the fried spinach dumplings, but I did not see them anywhere, so we called it a lunch. The above was our dim sum tally, with our drinks and spring rolls scribbled down on the back. You hand it to a waiter, who rings up the bill for you. Even with all our food and beers, after tax and tip it was only eighteen dollars per person. It's always so much fun, it would be worth it at twice the price. 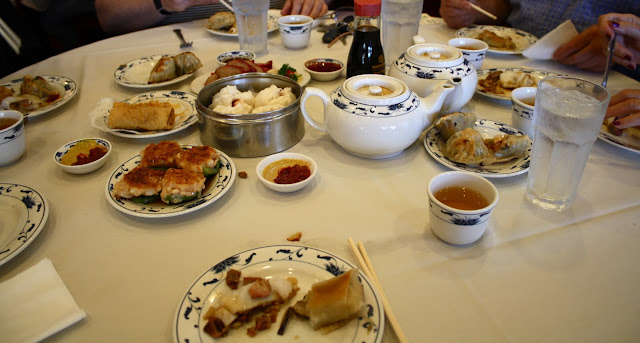 I will close with a picture I sent to my good friend Bryce, a fellow lover of dim sum with whom I shared one of my first meals at Empress Pavilion almost seven years ago. He replied "I wish I could trade places with you." But he was at work and he's a dentist; that probably wouldn't have worked out well for anyone.
Posted by JustinM at 11:47 AM

Lunasia in Alhambra was really good Dim Sum. Maybe we can have a double date there - a blogger meet up!

I LOVE the last picture. Looks like so much fun.

Melissa: I'm sure that could be arranged.

Michelle: It definitely is. It's fun to take the Gold Line down to Chinatown and walk around before and after lunch.